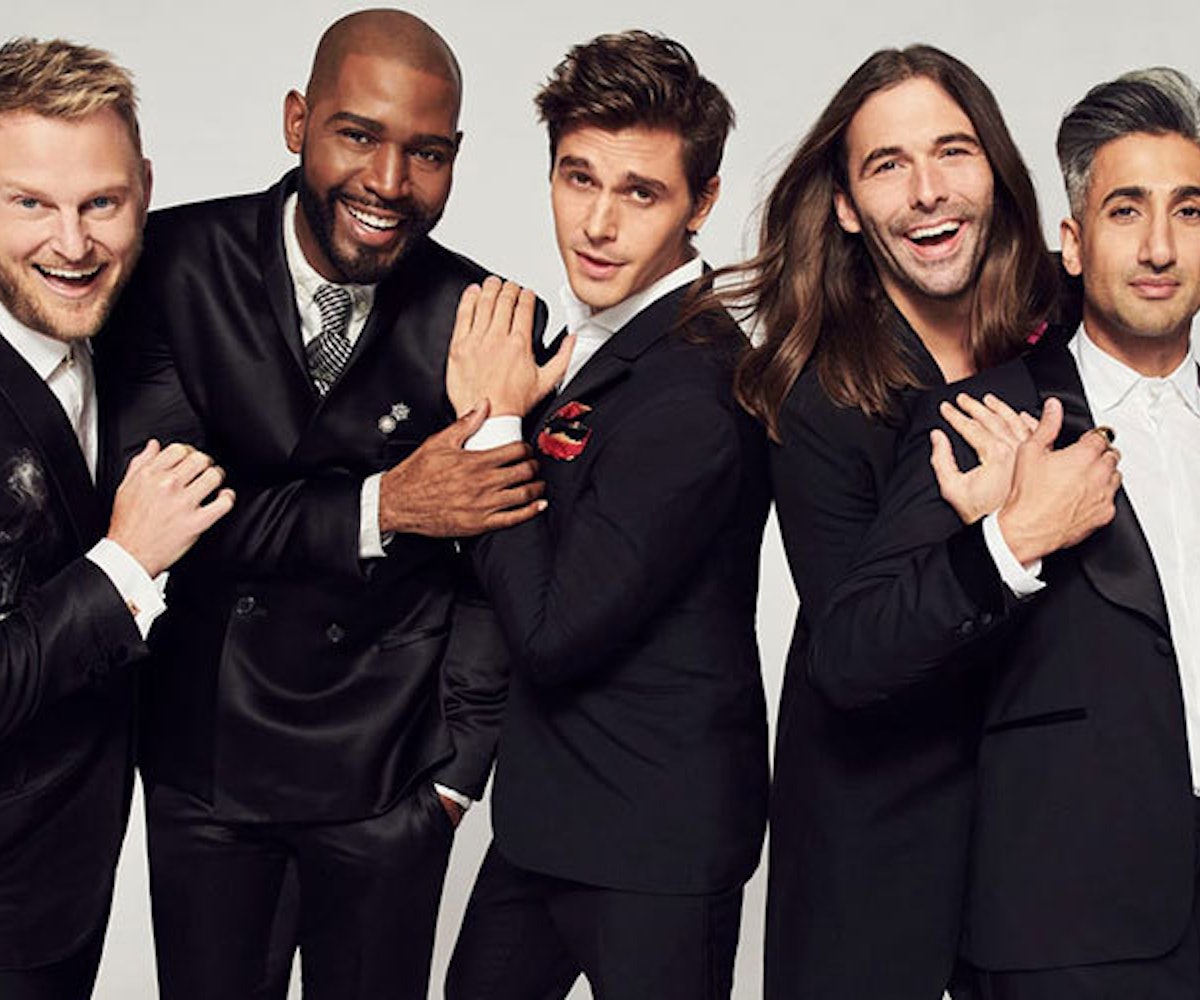 The heart of any makeover television series is recognizing where someone has gone wrong and committing to righting it. Whether it's sartorial (What Not To Wear) or goal-oriented (MTV's Made) or domestic (Trading Spaces), there's a clear arc of self-improvement. So with that in mind, let me admit where I've gone wrong: Netflix's reboot of the hit makeover series Queer Eye is, despite my initial apprehension, great.

The idea of rebooting something like Queer Eye for the Straight Guy in 2018 initially felt off to me. The way I saw it, Queer Eye was just like the doomed-from-the-start Fire Island reality series: surface-level television fodder that won't do much for queer visibility and representation. "The original show was fighting for tolerance," the trailer announces, "our fight is for acceptance." Hmm, okay. I dismissed it and moved on with my life, hoping someone out there was working on a show that isn't about a bunch of gay men doing for cis straight men what GQ tries to do in print.

But, like, wait. Why is that such a bad thing? The gays aren't stereotyped as being stylish when it comes to all things clothing, interiors, food, and overall lifestyle for nothing, honey. So why not have a bunch of them makeover a stranger's life? And if they can help inspire tolerance and acceptance in others in the process, then that's just great.

Though the reviews of the eight-episode first season were glowing, it took more than one friend of mine earnestly advising me to give it a shot before I decided to do so. Two days later, I had cried and laughed my way through all eight episodes, leaving behind an empty box of cereal and a desire to improve myself in its wake. And I’ve got the new Fab 5 to blame.

Dropping the "for the Straight Guy" from the reboot's name is a choice that pays off. It re-centers the show's goal, opening the Fab 5 up to improving a variety of individuals with a variety of identities rather than simply straight dudes. They approach their subjects' lives through a queer lens not because they want to show them a queer life, but because they know their subjects' lives are already great and want to show them that. They do it for a single 50-something living in a basement apartment; they do it for a Trump voter; they do it for a Christian father of six just looking to make his wife's and children's lives easier; they do it for a shy gay man looking to come out to his mother. Funny what a little tender loving care can do to an individual's whole way of being.

Queer Eye's delight, however, comes from the Fab 5. It is so goddamn refreshing to see gay men on screen that don't fit the Abercrombie & Fitch or Kurt Hummel mold. Sure, Antoni Porowski (the show's culinary expert) and Karamo Brown (the show's culture expert) present in a more conventionally masculine manner, but they're vibrant and textured and aren't afraid to wear the multitudes they contain on their sleeves. The flamboyance of the show's beauty and grooming expert, Jonathan Van Ness, is beyond inspiring; he is the role model I, a femme gay male, wish I had growing up. Tan France, the show's fashion expert, is elegant and damn good at styling. Watching him listen to guys like the 33-year-old who still lived with his parents' story and then guiding them to outfits that instantly make them walk taller is a joy. France's frankness about his marriage and identity is unheard of in LGBTQIA television and damn well better not be the last. And as for Bobby Berk? He puts in the work as the show's interior design expert and truly, truly knows how to make a house a home (sometimes even a firehouse). Berk brings balance, in both personality and talent.

What Queer Eye does so well is it doesn't break new ground—the show's Straight Guy iteration did that. Rather, Queer Eye builds a sustainable program on top of that ground. Its honest depictions of queer camaraderie aren't just a joy to watch but leave audience members, including me, yearning for something like that in their own lives. The makeovers, from beauty to home, are secondary to the positive inspiration Queer Eye sparks in its viewers. Because really, as cheesy as it sounds, each and every day is a chance to improve ourselves. Queer Eye simply provides a new lens to do so. Like Van Ness says: Can you believe? I can and I do.