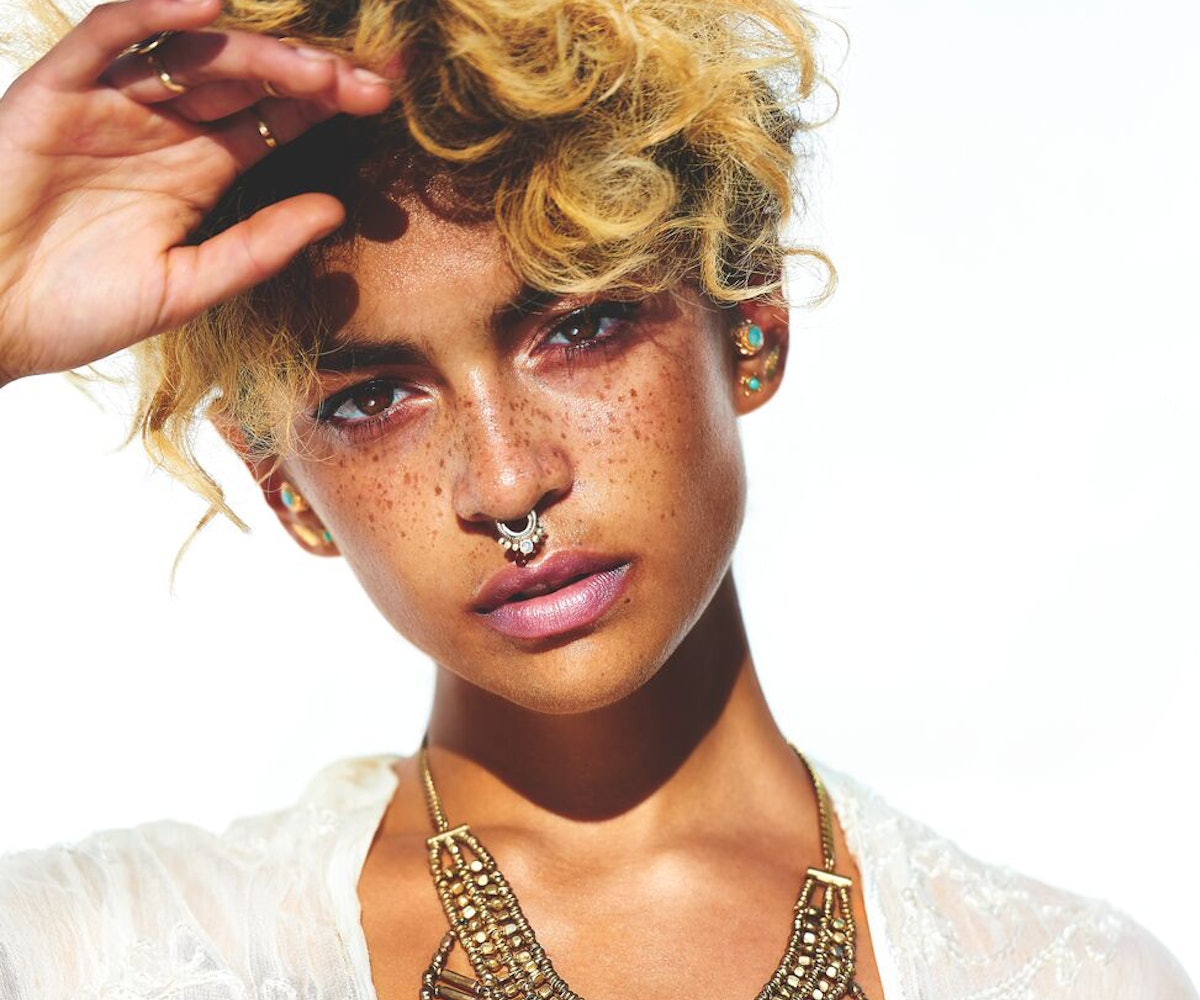 QUIÑ is not an artist that can be confined to labels, genres—or even planet Earth. No, rather she is an otherworldly being brought to humankind by good fortune, and we are so glad she decided to stop by.

For her debut album Galactica, the celestial singer-songwriter takes us on a tour of her past experiences, which cover many realms. Inspired by the adventures she had while traveling her way through the universe by way of dreams, QUIÑ leads us through her path to self-discovery, illustrated in a brilliantly unique and personal sound.

You may have heard the 25-year-old last year featured on G-Eazy’s track “Think About You.” The two collaborated again on her upcoming solo project on the song “Over Again.” Getting to this point was not so easy, however. QUIÑ has had to overcome some serious shyness over the years. There once was a time when she couldn’t even smile in family pictures, let alone share her music with a whole audience of strangers.

Being in the high school choir was a huge step for QUIÑ, one that allowed her to realize the power behind her voice and hone in on her unique sound. Now, she's ready to take the stage with DJ Gnash following the release of her album.

A few weeks ago, QUIÑ was able to take some time out of becoming queen of the universe to chat with us about her forthcoming project, tour, and how to dominate the world.

Can you tell us a little bit about your album?

, and it is based in space. It is an island in space, so there is like a sea of space below and oceans in the sky. There is a lot of mystery going on in the island. So I created my own universe, where I will always be able to tell stories. It's completely versatile and endless. It started from a dream I had.

How would you describe your musical vision?

It's out of this world, I would say. I call the music that I make "fantasy soul music," because when people would always ask me "what kind of music do you make?" I would always have nothing to say. Then one day, it was like, "Ding!" "Fantasy" because that's where my imagination works and reports back for duty and "soul" because it's really me, writing everything. And then when you say that, no one can ask anything else, they get it.

Can you tell us about your creative process?

Throughout every song I've ever made, for the most part, it's always just the big talking to the little me, it's always just like a little lesson. It does it all on its own; this story has made itself, I'm just kind of like the tool. I have the voice and I have the hands to type and write. It's been telling itself for a while, and then I just kind of put it in order, and then listen back, and I'm like, "Yep, I was talking about myself the whole time." Except for "Over Again." That was obviously a little love song... or not a love song. That one was very specific, but I usually don't talk about that stuff. Like, "Math" is one of those songs for when you're having a bad day. "Over Again" is probably the only real love song. I have a song called "Solo" right after that, and it's cool because anyone can plug in their own variables to these songs. I just set up the equations.

My dad always played the drums and the congas and the trumpet, and he would bring his friends over. They would just smoke and jam out. So I was always around that stuff. But I remember it was, like, I had this adult brain talking to me. I was three years old, and I know the age because I was in pre-school. I had this teacher, Mrs. Beverly, and she came up to me, and I was singing this little ditty out loud. I was that kid where I could sing out loud, but just don't pop my bubble. Don't talk to me, don't look at me, don't do anything about it, act like I'm not here, that's what I'm doing. So I remember singing and Mrs. Beverly said, "Awww, Bianca," that's my first name, "I love your little song," and I like growled at her. I was like, "Ugh, I never want to sing again! This is horrible! Why did she do that?" She just killed my mood.

I was just funny, I got along with everyone; I didn't have problems in school. I was a super-average student because I just didn't care about it. And I knew we were working to get a good grade, not to learn. So I didn't care about anything I was learning. I loved going to choir class, hated singing solos, and I just did my work. I didn't really learn anything, honestly. I knew if I had a paper due, I would just write a good paper and get a B because I did it the night before. Socially, I was pretty cool with everybody. Bullies loved me. When you just are yourself and you're just funny, you're just the homie, and it's always good.

How does that person you were in high school compare to who you are now?

I'm the same person. I guess now that I think about it, who I was, just bleeds into who I am now. I mean, I think, I'm still kind of funny, and as far as I know, I still get along with everybody. I'm just chillin'.

What made you want to choose music as a career path?

I have always made it, and it was the one thing that I was really scared of. I have always been a good writer, but I never thought to share it until I was 19 and taking a break from school. I realized there is a reason why my brain writes and sings, and what am I doing not sharing it? Because that would be a waste. And when I had that epiphany, it came with a whole bunch of different epiphanies. I was living in the Bay at the time, and it was the first time I ever got to separate myself from friends, or a boyfriend, or school. I wasn't writing 10-page papers anymore; I was writing more about me. Plus I had gone through a little drama to where it became the portal to writing, and I realized I am a great writer when it comes to rhyming. I'm a word nerd, and I had almost forgotten that because I was too busy doing school. And that's cool too, but it just wasn't my thing. So once I found something I really cared about and I realized my one challenge was to beat my shyness. And I can do that.

Where do you see yourself in the next five years?