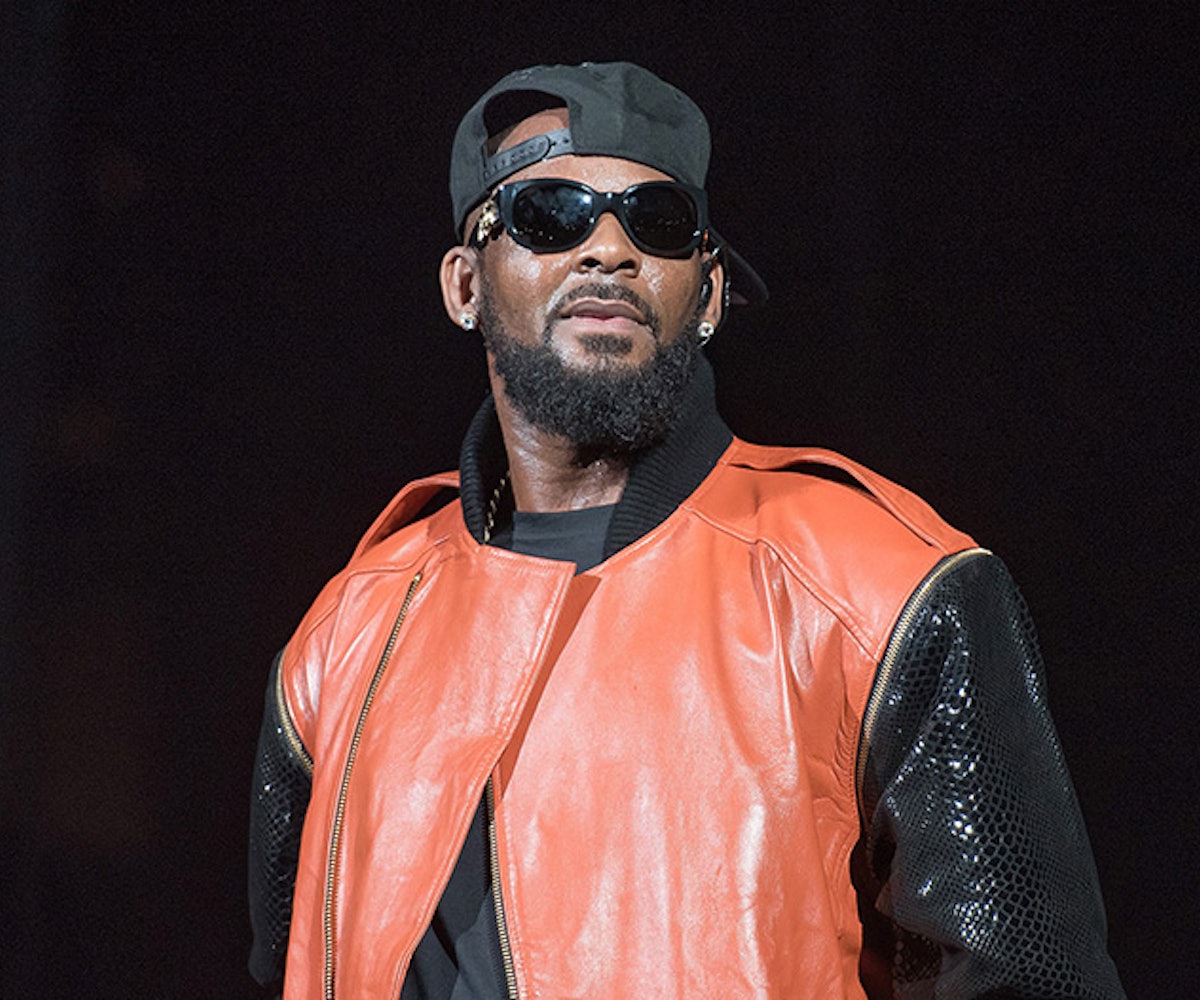 It's no secret that R. Kelly has been accused of pedophilia by over two dozen women in a lawsuit. And either everyone has forgotten, or we’ve all decided to turn the other cheek.

Last night, Kelly took the stage at the Soul Train awards and performed a medley of hits: “Ignition (Remix),” “Your Body’s Callin’,” “Backyard Party,” and more. Before his standing ovation, Erykah Badu praised him, saying, “This man has done more for the blacks than anyone.” She added, “He taught me how, in the name of love, to step together. He taught us how to stay out of that trapped closet, and he believes he can fly.”

Perhaps by “fly,” she meant soaring above and away from his decades-long list of allegations that Chicago Sun-Times' Jim DeRogatis valiantly reported on.

The history of R. Kelly’s sexual assault charges has been publicly available for over a decade, but let's break it down. His child porn allegations were acquitted and, despite numerous reports, testimonials, and a notoriously flawed case, he's never been tried for rape or statutory rape. But thirty—thirty—people testified that it was a fourteen-year-old girl who was being forcibly coerced in that video. He was only ever tried in court for the child pornography—the rape allegations never made it into the courts. In fact, he has, on more than one occasion, paid off his victims and settled out of court because celebrity and money, as it would appear, is louder than the voices of black girls from low income families. Says DeRogatis: "I think in the end there were two dozen women with various level of details. Obviously the women who were part of the hundreds of pages of lawsuits—hell of a lot of details. There were girls who just told one simple story, and there were a lot of girls who told stories that lasted hours which still make me sick to my stomach. It never was one girl on one tape. Or one girl and Aaliyah."

Shame. It’s a shame that this discussion is still going on in 2015. By BET aligning itself with R. Kelly’s Soul Train Awards performance, it silenced those voices and implied that we should get over it. It implied the same flippant attitude R. Kelly has had all this time. (Kelly hasn’t served prison time or publicly sought any sort of treatment. Where’s the apology? Not anywhere Google can find.) BET's alignment says that women—women of color, specifically—don't matter. For example, Badu shaded Iggy Azalea, but praised R. Kelly. Now, we aren’t defending Azalea's “artistry,” but her problems don’t involve filming yourself urinating on an underage girl or having a very confusing relationship with a 14-year-old Aaliyah. People laughed when Badu tore another woman down, but stood and clapped for a man that abused many children.

A lot of the people who are excited about Kelly learned about him after the allegations were settled and because of Space Jam. But, to drive home DeRogatis' point, all of the facts, the charges, and the lawsuits are right there, in public domain, filed cleverly the day before Christmas, before the Internet could carefully track these things. Do we, collectively, not see the ickiness in singing along to odes to sex, "owning pussy," and giving a standing ovation to a man who has sexually abused young women who don't have the representation and clout of Kelly? The disregard for Kelly’s history as a sexual predator and abuser disgraces all his victims and victims everywhere. The whole “I know he has a history, but 'Ignition' is my jam” excuse just doesn’t won't cut it anymore. It takes the voice away from women and tells them that they, their bodies and voices, don’t matter as much as this assailant megastar. Do you believe that excuse can fly?