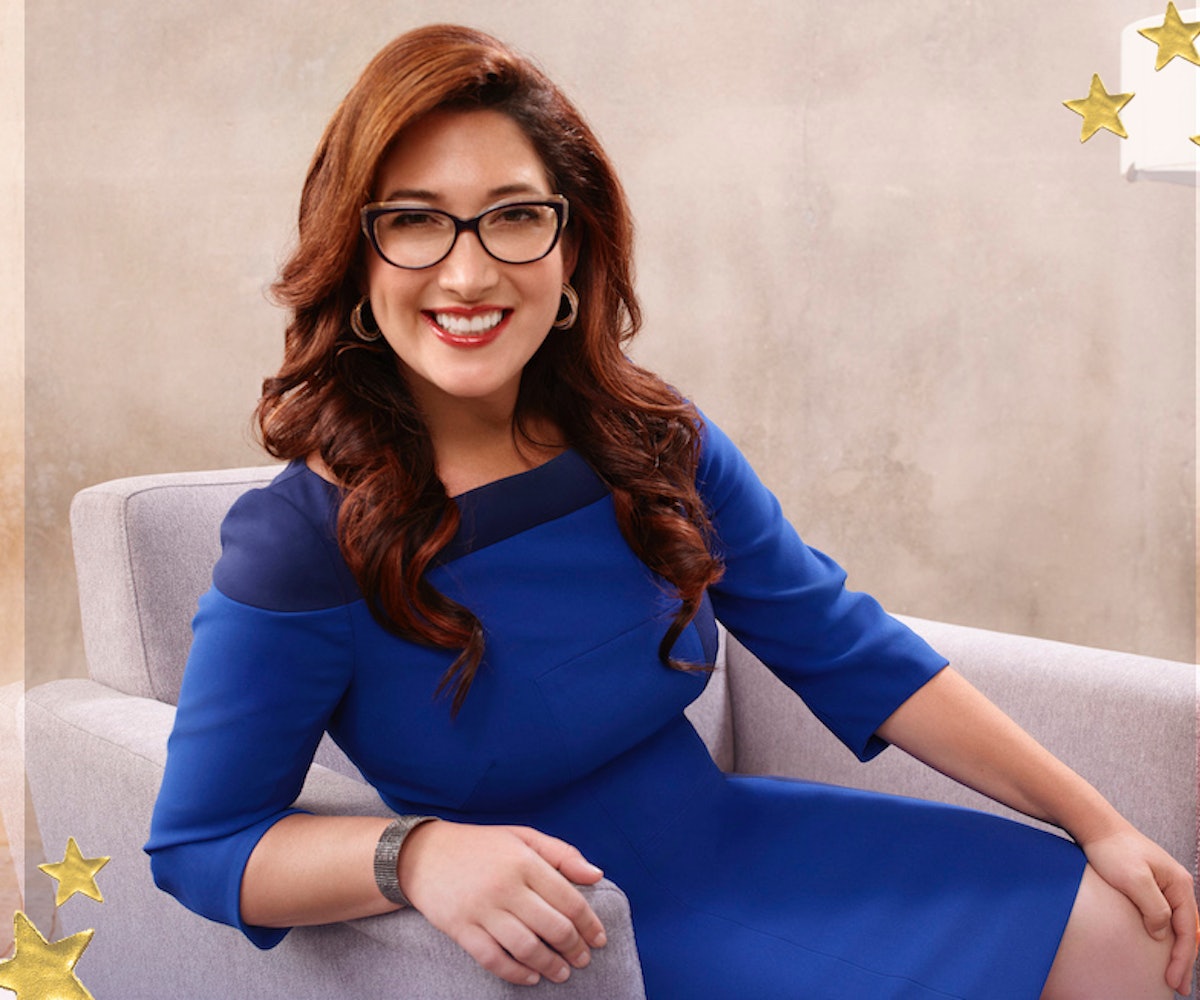 As if the gender pay gap wasn’t enough of a struggle, women applying for jobs in 2016 have a whole new set of challenges to face, thanks in no small part to how much of our lives are now broadcast on the public digital space. As women compete for jobs in a market where everything is on display—from last night’s tequila mistake to that embarrassing essay you wrote in 2010—career advice from successful women becomes more and more priceless. And there’s perhaps no one better suited to give that advice than Randi Zuckerberg: At 34, she’s a New York Times bestselling author, founder of her own media company, and editor-in-chief of Dot Complicated, a digital media platform. Before all that, she created and ran Facebook’s marketing programs—so if anyone has insight into how social media can hurt or help your future job prospects, it’s her.

With just a few days until the premiere of her new show, Quit Your Day Job on Oxygen (check it out on Wednesday, March 30 at 10pm EST), we caught up with Zuckerberg to pick her brain for her best career advice, from how to clean up your social presence to how to get the salary you deserve.

What are you working on right now? Your role on Quit Your Day Job sounds so interesting!

Thanks! I feel very lucky to be working on so many exciting projects, but right now Quit Your Day Job is really the big focus for me since it’s launching next week. For me, every day when I wake up, the first thing I think about is, “How can I motivate, inspire, and help female entrepreneurs today?” whether it’s through angel investing in them or lecturing at a college for female engineering students. So when Oxygen Original Productions approached me with this show, it just seemed like the perfect opportunity to showcase female entrepreneurs of all ethnicities and to turn America’s stereotype of what a female entrepreneur looks like on its head. It’s something I could not have been more thrilled to be involved with.

What do you look for from these entrepreneurs? What makes them stand out to you?

The first thing that I look for is passion. It’s so easy to tell when someone is doing something to make a quick dollar. As soon as I hear the words, “Well there’s a market need for this,” I’m done, because that just means that someone’s trying to look for a way to make money. Being an entrepreneur is hard, and the only kind of entrepreneur that I invest in is a passionate one who likes what they’re doing so much that they’ll do it even when the going gets tough. I think the second thing that people might be surprised to hear is that, oftentimes, I’m investing in the entrepreneurs even more than I’m investing in the products. There are a lot of times where I’ll say, “You know, I don’t love this product but I love this entrepreneur, and they’re going to eventually get it right whether it’s this product or their next product, but I want to invest in them.” To me, that’s even more important than the product itself.

How do you know it’s going to be the hit? What do you look for in that idea?

I think you can tell really early on if there’s a product market fit for something. It doesn’t require tons of money and time to develop if people like your product. You can do a really small test out of the marketplace. I actually love sites like Kickstarter and Indiegogo, crowdfunding sites, as ways of testing if there’s a demand and a segment around your product. I often encourage entrepreneurs, even if they don’t need the money, to do a small crowdfunding campaign just so they can see if real people, real consumers out there will actually put their money where their mouth is and pre-order your product. There are a lot of great, easy ways to test if you have a good product and if it’s going to hit.

When you’re hiring someone, or looking to invest in them, how much weight do you place on their social media presence?

Everyone has different comfort levels with social media so it wouldn’t be a “make or break” if an entrepreneur didn’t have a fully thought-out strategy. If they invested in my mentorship, that’s an area I can bring a lot to the table to help them. That being said, an entrepreneur definitely has a head start in my book if they take the time to develop their personal brand and to build an audience online already. Social media is a great focus group to be able to test design, logos, names—but again, not a make or break because I know that that’s a place that I can add value coming in as an investor.

For women who are graduating college in May and applying for their first jobs, do you feel like it’s really important for them to clean up their social media before diving into the job market or do you think it doesn’t matter?

The first thing that every single employer is going to do is Google you. That being said, though, it is hard to erase everything from social media publicly. It’s okay to be a three-dimensional authentic person. We all now know that people have lives outside of work. That people go out with their friends, they do things for fun, they have hobbies. What I would start thinking about though is when you’re six months, a year, two years out from going out into the job market, instead of just posting party photos, how can I start putting a thought out there? How can I start posting articles about interesting things about the industry that I want to go into? How can I start blogging? How can I start being thought of as a curator? Making sure you’re positioning yourself strongly there. That’s going to mean a lot more than just doing a collection of red Solo cup photos.

Do you feel like there are issues that are unique to this graduating class of millennial women in the job market that other generations haven’t faced?

I think that new employees today don’t have the luxury of separating their personal and professional life the way that older generations had that luxury. Now, you can just do a Google search and you can see everything about them. You don’t get to be like “personal Randi” and then “professional Randi” anymore. You just have one identity.  That’s a really interesting challenge for millennials going into the workforce today because, on one hand, you don’t want to be afraid of being an authentic three-dimensional person, but on the other hand, you have to understand you might be working for a boss who likes keeping two identities separate. That adds a lot of complexity when you add those two different generations in the workforce together.

Totally. I also wanted to talk to you about money. I’ve noticed that women have a really hard time asking for what they deserve, especially in these really competitive fields where there is this feeling that if you don’t accept a really low salary, there are a thousand other people who will. Do you have any salary negotiating tips for an entry-level candidate?

Yes! I’m so glad you asked that. It’s so crazy, right? Women would rather tell you their weight than tell you their salary. It makes them so anxious talking about money. It’s really difficult because if women don’t talk about money then they’re going to make less at the job than their male counterparts who are not afraid of talking about it and asking for it. My advice is if you do feel so bitterly uncomfortable asking for more money, think about the other parts of the job offer. There are potential equities in the company you can ask for, potential benefits, expenses, vacation days. If you feel incredibly uncomfortable, there are ways of negotiating and increasing your package, without just asking for more cash.

How do you know what’s reasonable to ask for in that sort of situation?

The last thing an employer wants to hear is when you ask for something is, “Because I’m going to work really hard” or “Because I really care” or  “I deserve it” or “I want this.” That’s not something an employer is going to care about. They are not going to respond to an emotional need for more money. If you want to say, “This is what the market rate is for my position. I have evaluated some similar companies, their equity, and their vacation policies, so that’s why I’m asking you for this.” That is something an employer can’t argue with.

How do you think women can help each other out in highly competitive fields?

I think the old-fashioned idea of finding that one higher-up mentor is pretty overrated and outdated. I think we’re often like, “Oh, find that one mentor. Everything’s going to be great. They’re going to help you pave your career.” In reality, that mentor is busy. They got to that position by being ambitious and clawing their way there, and they don’t have time for you and they certainly don’t have time to map out your career for you. You’re going to be far better off creating a network of peers of other women who are in the same boat as you, where you could all rise together and help one another along the way.

That makes so much sense.

I spent a lot of time in my career trying to find that one woman six levels up from me who was going to solve all my problems. When I looked around at who was really helping me, it was my peers. They were the ones I was turning to, saying, “Oh my gosh, I have to hire my first person. How do I do it?” or “What do I look for in a co-founder?” or “Have any of you had experience with this before?” All of these women on "Women in Tech" e-mail lists and Facebook groups that I was turning to for mentorship and advice, not these high-in-the-sky women.

It sounds pretty counterintuitive though because I feel like, in the workplace, women are often pitted against each other.

Yes. I think, unfortunately, too many women see it as a zero-to-one game. They see it as, “If that other woman is successful, that means I’m not.” I think we also need to make that an old-fashioned and outdated idea. There’s enough room in the world for all of us to be successful. You’re right, I wish more women would start seeing it as, “We all rise together” instead of “One woman wins, one loses.”

NEXT UP
Entertainment
John Waters To Make His First Movie In Nearly 20 Years
Entertainment
Jared Leto To Star In Karl Lagerfeld Biopic
Entertainment
Relive ‘00s New York With Yeah Yeah Yeahs, The Strokes In ‘Meet Me In The Bathroom’ Trailer
Entertainment
Aya Nakamura On Preparing Her Fortnite Soundwave Series Performance