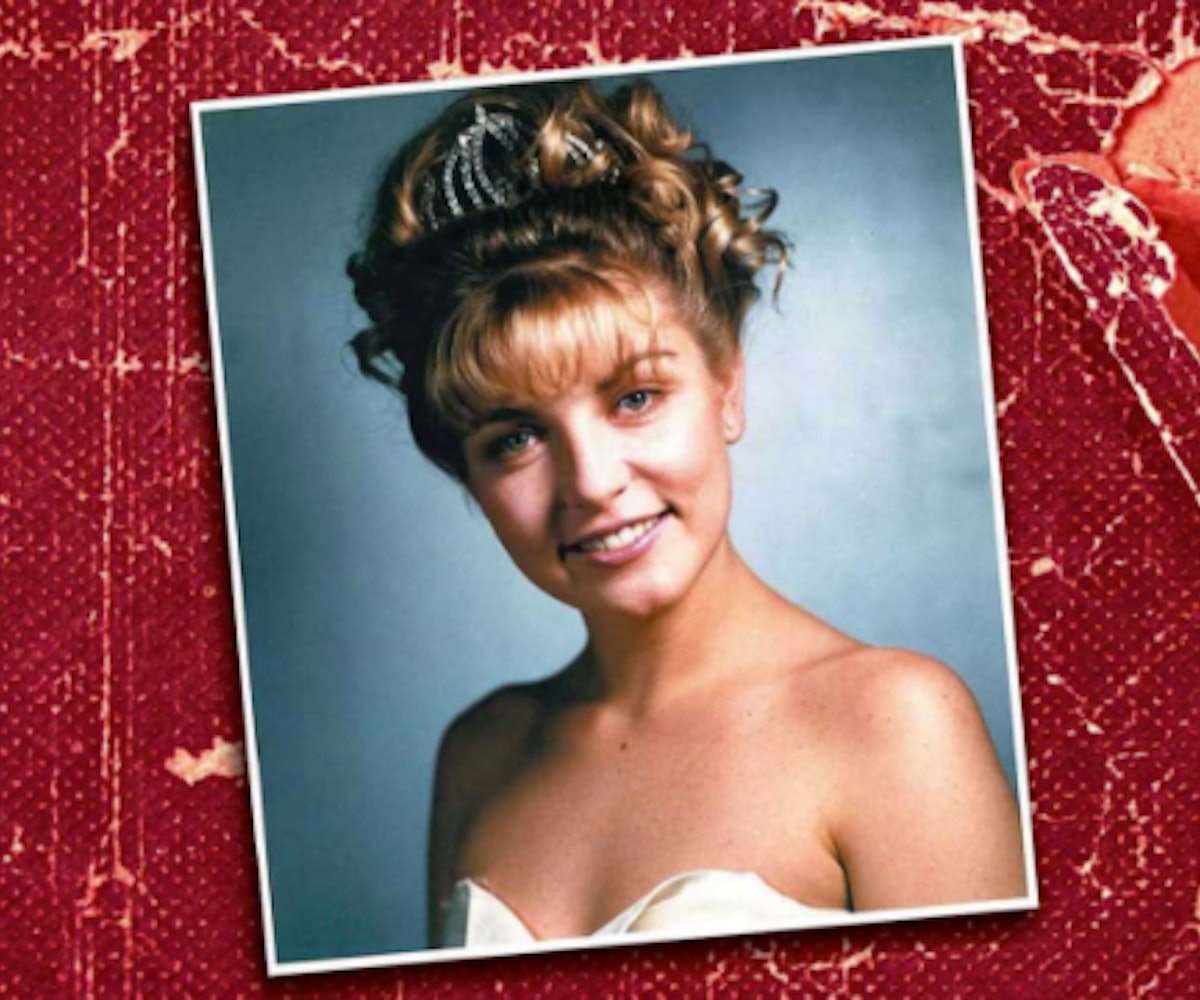 Most people I know had their first experience with David Lynch and Mark Frost's Twin Peaks as adults, 10 or even 20 years after the series first aired. In a sense, I was no different; I didn't actually watch a single episode of the show until a few years ago when Twin Peaks came out on Netflix. But the language of the show, both visual and auditory, had been with me since I was a small child, thanks to the fact that my parents watched it obsessively, as pretty much everyone else in America did, and our apartment was small enough that I could hear the strains of Angelo Badalamenti's instantly iconic theme music through the closed door of my bedroom as I tried to fall to sleep at night.

From a very young age, I knew Twin Peaks was something suited only for adults, and I desperately wanted to be an adult. But try as I might, there was no way I'd be able to see the show. By the time I got up enough nerve to ask my parents if I could watch it, Twin Peaks was off the air, and there was no way in hell that they were going to allow me to rent it at Blockbuster. (If Netflix had existed in the '90s, my life really would have been so different.) So instead, Twin Peaks loomed in my mind as something forbidden and dark and just out of reach, something I could never really know or understand, no matter how badly I wanted to. And then one day I stumbled across a copy of The Secret Diary of Laura Palmer on my parent's bedroom bookshelf.

Its cover looked worn, tattered. This was intentional. I know that now, but back then, it felt like I had happened upon something that had long been lost, an actual artifact from another young girl's life. It felt like a found treasure. It felt... exciting. And excitement was just what I was looking for; I had been scanning my parents' books that day because I was home alone and bored and it was raining and I needed something to do. I was, I think, 10 years old. And reading this book, which I knew was forbidden even if I didn't know for sure why it was forbidden, was definitely something to do.

A quick glimpse of the first page revealed that Laura Palmer was not so different from me. I also kept a diary at that time and I, too, started each entry by dating the page and addressing the book: "Dear Diary." And, as Laura revealed right away, she had only just "officially turned 12 years old." So she was barely any older than me. She had gotten a horse for her birthday, and she had named it Troy. I also wanted a horse. And we had just "adopted" a manatee in Florida named Troy. The coincidences were, I realized later, Lynchian in their uncanniness. (Or, you know, not.)

So I took the book with me to my then-favorite reading spot (on the floor in the back of my parents' walk-in closet, underneath my father's hanging suits) and started reading. Written in the style of a young girl, The Secret Diary of Laura Palmer can feel artless at first, so closely does it adhere to its adolescent voice. Or, at least, I recognize the feeling of artlessness now, as an adult; when I was 10, I just felt like I'd found someone speaking my language, even if she were telling a story that didn't relate to my everyday life. (Which, you know, thank god.)

Very quickly, The Secret Diary left behind the world of horses and birthdays and revealed the troubling undercurrent that was threatening to pull Laura under the surface, and into the roiling, dark depths below. As I devoured the book in one straight shot, sitting on the closet floor (I still remember how my foot fell asleep beneath me, and how I barely even noticed), I entered a world of rape, drugs, violence, anonymous sexual encounters, and so much more. I was entranced, soaking it all in, even when I could only guess as to what certain plot points revolved around. It didn't matter that I didn't always know what was happening on the page. What was clear was that things were happening and that someday I would understand what it was all about.

Later that evening, after I had slipped the book back into its place on the shelf, I asked my parents if I might read The Secret Diary of Laura Palmer. "Absolutely not," they said. "No way." I'm sure they were pretty surprised I didn't argue with them about it (my usual approach), and so it was probably because they were suspicious that, the next time I went into their room, looking for the book, it was gone from its place on the shelf. I was upset, but not overly so. I had already read the whole thing, and it didn't feel like the end of my time with it. It felt a part of me. I'd read it again, I knew.

More than 20 years have passed since I first read The Secret Diary of Laura Palmer. When talking about the revival recently, I mentioned to people that I read the book when I was way too young, but how certain scenes—notably one at the beginning in which Laura heads into the woods with her best friend, Donna, and three Canadian motorcycle-riding men they've only just met for some riverside hooking up and a slow, solo dance in front of a fire—were formative in my life. I also dismissed the book as being, not trashy exactly, but slight; an lurid and almost too explicit accompaniment to a TV show whose enigmatic nature and refusal to be overly obvious was what made it so special. In my mind, the book had been a fun and wild read for me as a precocious kid, but it wasn't otherwise notable.

I was wrong. In re-reading The Secret Diary of Laura Palmer, in anticipation of the new Twin Peaks, as an adult who is not only much older than the fictional Laura Palmer but also much older than Jennifer Lynch, the then-22-year-old author of the book (who also happens to be David's daughter), I realized something that I was not able to see as a 10-year-old: This book is a startlingly powerful portrayal of what it means to be a sexually abused young woman and, I think, one of the best things to come out of the Twin Peaks universe.

The Secret Diary of Laura Palmer is no less provocative or compulsively readable to me now than it was when I was a child, but it also carries with it a weight of incredible pathos and horror; knowing the way the story will end does not make the journey any less heart-breaking. And while so often stories about the abuse of young women are told primarily by men (see: Twin Peaks), The Secret Diary was written by a young woman, one who was incredibly close in age to her doomed protagonist.

Unlike the show, which had to skirt around any overt depictions of sex or drug use (it was on basic cable, after all), the book is incredibly graphic—often uncomfortably so. But rather than gratuitous, this level of detail feels important; if we flinch when we're reading about these horrible things, that's okay, that's the right response to such atrocities.

More than this though, The Secret Diary offers a perceptively accurate look into the way victims of sexual abuse internalize the violence that happens to them and feel responsible for it. Writing in her diary, Laura often wonders if there is something inherently wrong with her and why it is that she "deserves" the nightmarish visitations she receives from her tormenter, B.O.B. Because Jennifer Lynch so perfectly mimics the writing style of an adolescent girl, it is impossible not to empathize with what Laura is going through, impossible not to want to find this young girl and help her before she begins participating in her own destruction.

But there will be no saving Laura, there will only be the experience of reading about the many ways in which she tries to escape the cycle of abuse within which she is so firmly entrenched. And yet, even though Laura cannot be saved, what The Secret Diary offers is something all too rare in the common "beautiful dead girl" narrative: It gives the "dead girl" a voice of her own. Instead of keeping Laura a total cipher, a mystery upon whom her friends and family can project their own fantasies, The Secret Diary guarantees that Laura can contribute to our perceptions of who she actually was. And she was a complicated person, one who made hasty decisions, who put herself in danger, who was unable to escape from the hell that others created for her. But she was a person, an all too recognizable one. She was the homecoming queen who questioned why others around her couldn't see the way she was "being swallowed up by pain," and instead just kept asking her "to smile again and again.” She was a young woman whose traumas affected the way in which she could feel about the people around her; because of the abuse she endured, she was never able to trust anyone or feel like love was something of which she was capable.

Far too often, the "beautiful dead girl" serves as a trope in popular culture; she stands for wasted opportunity, for all the ways in which our society does not protect its most defenseless members. The "beautiful dead girl" is meant to be admired and mourned, but she is never allowed to be known. The Secret Diary of Laura Palmer upends this trope; it allows readers to know what lies at the heart of, at least, this one "beautiful dead girl." This glimpse into Laura's troubled and tormented mind is an essential reminder that we have to pay attention to and take care of each other when we are still alive, not when it's too late.