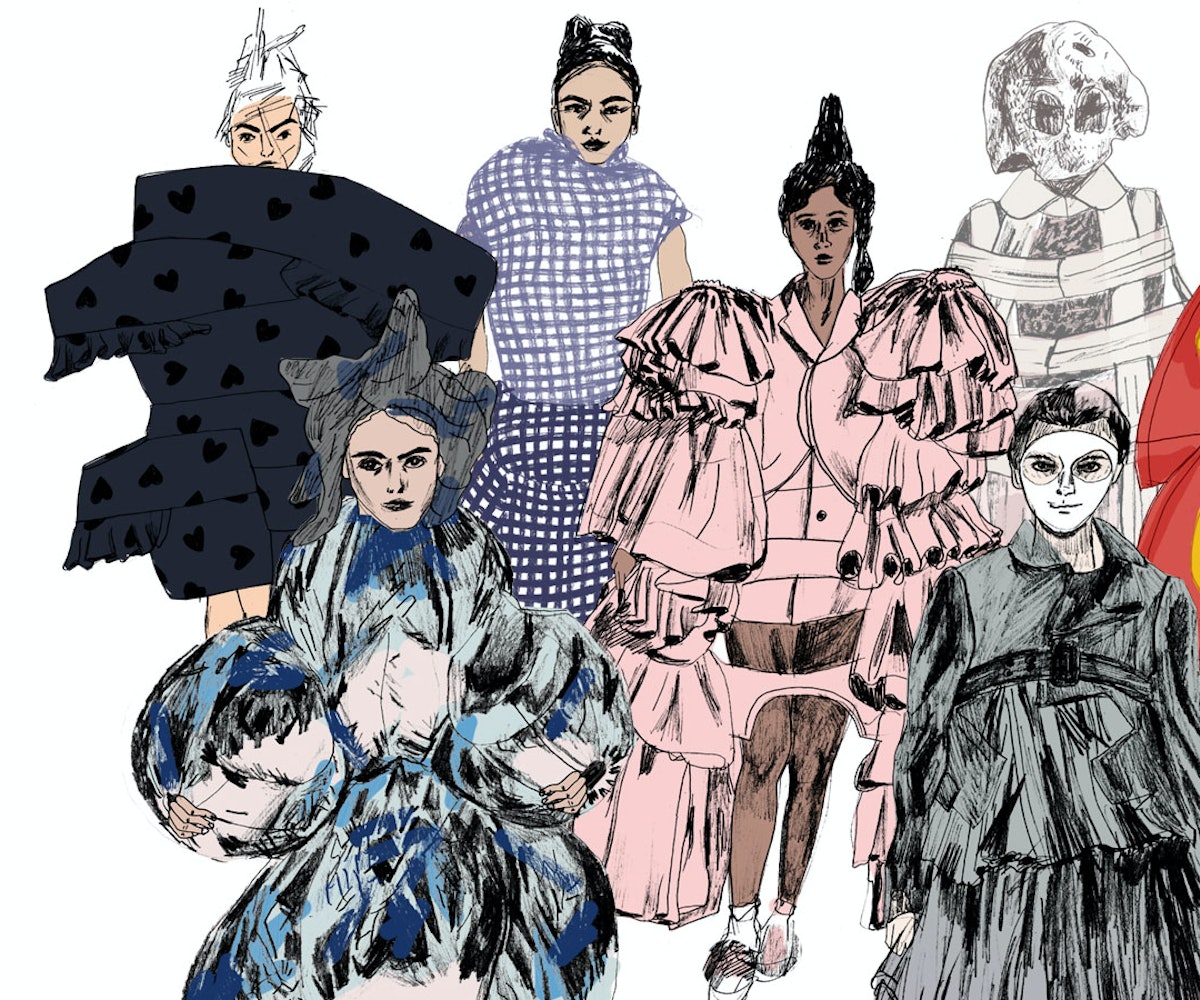 According to reports, the design process for Rei Kawakubo plays out like this: She mentions an abstract phrase or concept to her pattern makers, and they turn it into a garment. No sketches, no... nothing. It’s all, aptly, very avant-garde.

Kawakubo founded Comme des Garçons (French for “like the boys), the Tokyo- and Paris-based brand in 1969 and she’s been disrupting the status quo ever since. The designer is infamous for her deconstructing habits, voluminous silhouettes, protrusions of fabric; like her creative process, her clothes are viewed as completely singular. She's an original. They aren’t pretty in the conventional sense; often, they’re not even, really, very wearable. That's all intentional, though. The wearer, or the observer, is meant to tap into how the clothes make you feel, rather than how they make you look; it’s fashion to be admired, appreciated, and inspirational. As statement-making as her items tend to be, though, Kawakubo is notorious for staying very far behind the scenes, choosing, instead, to have her work speak for her. Which gives the fact that The Met is honoring her for the museum's latest exhibit all the more interesting.

Titled: “Rei Kawakubo/Comme des Garçons: Art of the In-Between,” it will showcase 150 of Kawakubo’s womenswear pieces, dating from the early 1980s to today. As it goes, before the exhibit becomes available for public viewing on May 4, all eyes will be set very firmly on the red carpet this upcoming Monday. There, actresses, designers, and industry somebodies, wwill gather to toast the opening, but, perhaps more importantly, to showcase what’s been dubbed the best fashion of the year.

We’re always optimistic that celebrities will humor us by committing to the theme. That’s not always the case, though—most tend to skew safe and stereotypically pretty. But if there were ever a time for Hollywood to challenge its sartorial limits, this would be it and, ahead, we’ve illustrated some of Kawakubo’s most Kawakubo looks in hope that we'll soon be seeing them on the Met's red carpet.

In a recent interview with Business of Fashion, the designer mulled over the purpose of the exhibit: “That might be the point of doing it at the Met. I would hope to teach some of those people a new aesthetic, that there are different ways of looking at beauty, other values that can be valid.”  We hope everyone’s taking notes.

Kawakubo’s spring/summer 1997 collection has been noted, many times over, as the collection that put the designer on the map. Its official title is “Body Meets Dress, Dress Meets Body,” but is often referred to as the “lumps and bumps” show. You can probably see why?

A multi-layered bubblegum pink ruffled delight with Rihanna's name written all over it.

The two-dimensional pieces created for Kawakubo’s fall/winter 2012 collection led some to believe that the designer was making commentary on the industry, implying that, like the clothes, it was flat and lacked depth.

This is just one of many sculptural moments to come down the runway during Kawakubo’s spring/summer 2017 collection. Ironically, the designer released a statement noting that she was thinking about “invisible clothes” when creating it.

“White drama” was the theme for the spring 2012 line. We think she delivered on both accounts.

Funny how even Kawakubo’s more approachable fashion moments would still come off as monumentally unconventional for any other designer.

With “The Future Of The Silhouette," her latest collection, and the final to make it into the exhibit, Kawakubo created a selection of snow women-like, bulbous pieces; 80 percent of models went down the runway with no sleeves.

We’re excited to see what’s in that mind of hers for next season... if it happens. She seemed uncertain of what might come next in a recent interview with Vogue, stating: “Maybe after the Met I won’t be able to make anything? Maybe the company will go down; I’m not sure.” We can only hope that's not the case.