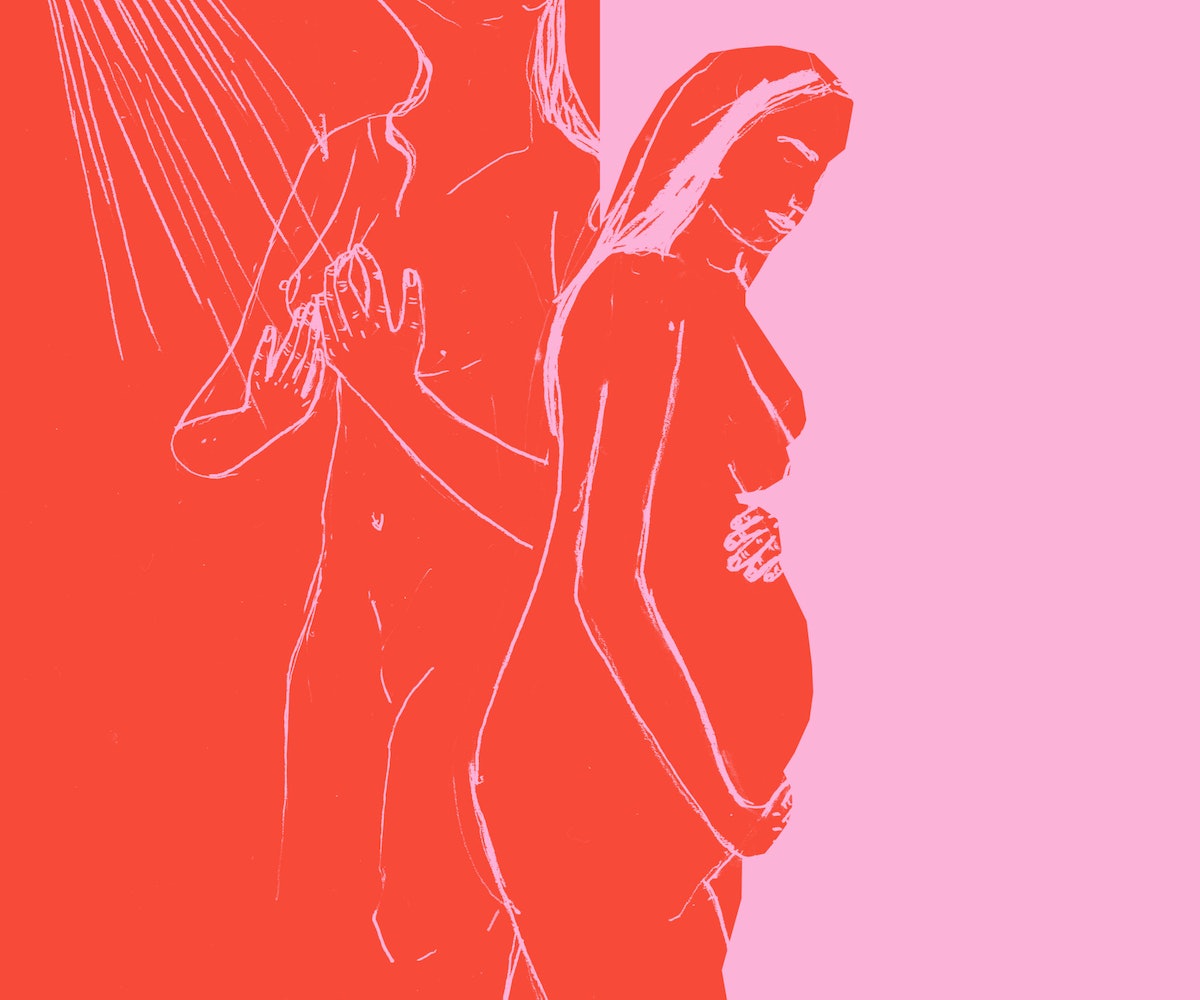 For some of us, the denial of access to the body we live in can feel like a solitary occurrence. When the immediacy of our own needs can be suffocating, the universality of our experience is at risk of being lost. Purchasing illegal hormones as a young trans girl didn’t leave me with the room to consider how systemic misogyny was also tampering with the bodies of the cisgender women around me. Our bodies, rather than our judgments about each other, drew the line in the sand between us.

What hindered us from communicating across difference was our focus on addressing the needs of our immediate communities. The trans prefix in my identity felt like it had no place in the crusade for reproductive rights, so I bit my tongue. The shift began when the unexpected potential of motherhood greeted me as I settled into my new body.

I knew the estrogen that propelled me into womanhood would also make my body sterile. I never had a choice: Trans woman are essentially required to undergo sterilizing treatments before they can be legally recognized as women. My decision to have children was taken from me. The women outside of my direct understanding felt even further away when I searched for solace and language that hadn’t yet been created. The issues across the spectrum of womanhood weren’t being spoken in the same breath, and isolation ensued. I realized before we could forth an image of solidarity to the world, we must acknowledge the truth at home: All of us, cis or trans, experience genitalia-based oppression because we are women. Race, class, and the gender we were assigned at birth further color the nuance of our lives.

As for me, the intimacy that I imbue in the relationship I have with my body is my tool against oppression. Most days begin with observing my naked transgender female form, the product of my own determination and medical advancement. In the shower, I cleanse my breasts with the familiarity of having fostered their growth. This must take place before public inspection can occur; that's what it feels for a trans woman in the gaze of others. After the shower, this ceremony ends with a small testosterone-blocking pill that puts a halt on my body from betraying me. The secrecy of this act is unknown to the world I step into. As I observe the women I coexist with, I wonder how they combat their own specific persecutions. I step outside of myself in the hopes of aiding the future history of all the ways one can experience being a woman today.

Historically, the state has been the constant opponent of the black female body. Inspired by the life of Margaret Garner, an enslaved African American woman who escaped slavery by fleeing to Ohio in 1856, Toni Morrison wrote Beloved in 1987. In this novel, we follow Sethe, the female protagonist whose home is haunted by the death of her youngest child. Morrison masterfully illustrates a heavily pregnant Sethe as she travels on foot to the free state of Ohio, and the reader witnesses her give birth during her travels. Once she is settled into her new home, she is found by a band of white men who have the right to follow her across state lines under the Fugitive Slave Act of 1850. Rather than putting her child’s life in their hands, she kills her own daughter. Morrison’s transformative work still speaks to the lack of state-level care for the lives of black children. In the year 2014 in Cleveland and Ferguson, Missouri, the mothers of Tamir Rice and Michael Brown held funerals for their children who had been killed by the state. For many black women, the right to watch their child mature into adulthood is an essential component of their reproductive rights. This notion deserves to be placed alongside the landmark portrait painted by Roe v. Wade in 1973, which granted women the right to terminate their pregnancies, in conversations about reproductive justice.

Access to our bodies is only granted grudgingly, in ways meant to shame our decisions. Later this year, the U.S. Supreme Court will deliberate whether or not House Bill 2, the 2013 law passed by Texas legislature, is an “undue burden” for some cisgender women, which would make it unconstitutional. This bill contains multiple attacks on women's access to abortions, including a 20-week abortion ban, limiting the definition of abortion by stating that the act must be done with the intent to preserve the health of an unborn child, for removal of a dead unborn child, removal of an ectopic pregnancy, or to treat an illness. The state of Texas has told women that input for their health care needs is not required. The decision lies in the hands of people who treat their bodies as a concept. While many cisgender women are being denied the right to declare the needs of their bodies, the self-identification of trans women is similarly being regulated.

Many private health insurance plans currently deny service to women of transgender experience. In the states that do provide service, there is often a preordained notion of the relationships we must have with our bodies in order to receive care. When I first approached a doctor about Hormone Replacement Therapy (HRT), my body became a point of dissection. I knew that I must perpetuate the "born in the wrong body" narrative in order to be understood. The performance of self-hatred that I presented in that doctor’s office made my needs authentic. The gatekeepers to the services needed by women have made us dependent on their diagnosis of who we are. Although the health care issues of cis and trans women are unlike in many ways, the common thread is the same. Placing the identity of a woman above your head is an invitation for it to be challenged.

When I was 11 years old, I witnessed the birth of my oldest niece. That summer, I became the designated babysitter. I marveled at the miracle of genetics, as I found traces of my family in her smile. As time went along and she grew, so did her hair. The thick straight texture of it was clearly inherited from her father’s side. She was the physical embodiment of the love between her two parents. As I taught her colors and shapes, I watched the world through the fresh innocence of her perspective. While I watched her develop into her mother’s disposition, I wondered what my future children would inherit from me.

When HRT made me sterile as an adult, I put these memories away. Every injection of estrogen drove me further away from passing along pieces of myself to my children. However, on February 24, 2016 a 26-year-old woman from Texas become the first in the United States to receive a uterus transplant. The fact that this cisgender woman and I were both born without a uterus allowed me to grant entry to these forgotten memories again.

The tapestry of reproductive rights expands far beyond these realms. As cis and trans women are reduced to their body parts, trans men and gender nonconforming people are largely left out of these conversations. By placing our specific needs alongside each other’s, we begin to undo the systemic practice of being told who we are. Knowing the needs of people before knowing their circumstances does not have to be a utopian fantasy. The declaration of who we are is in the attempt of understanding each other.