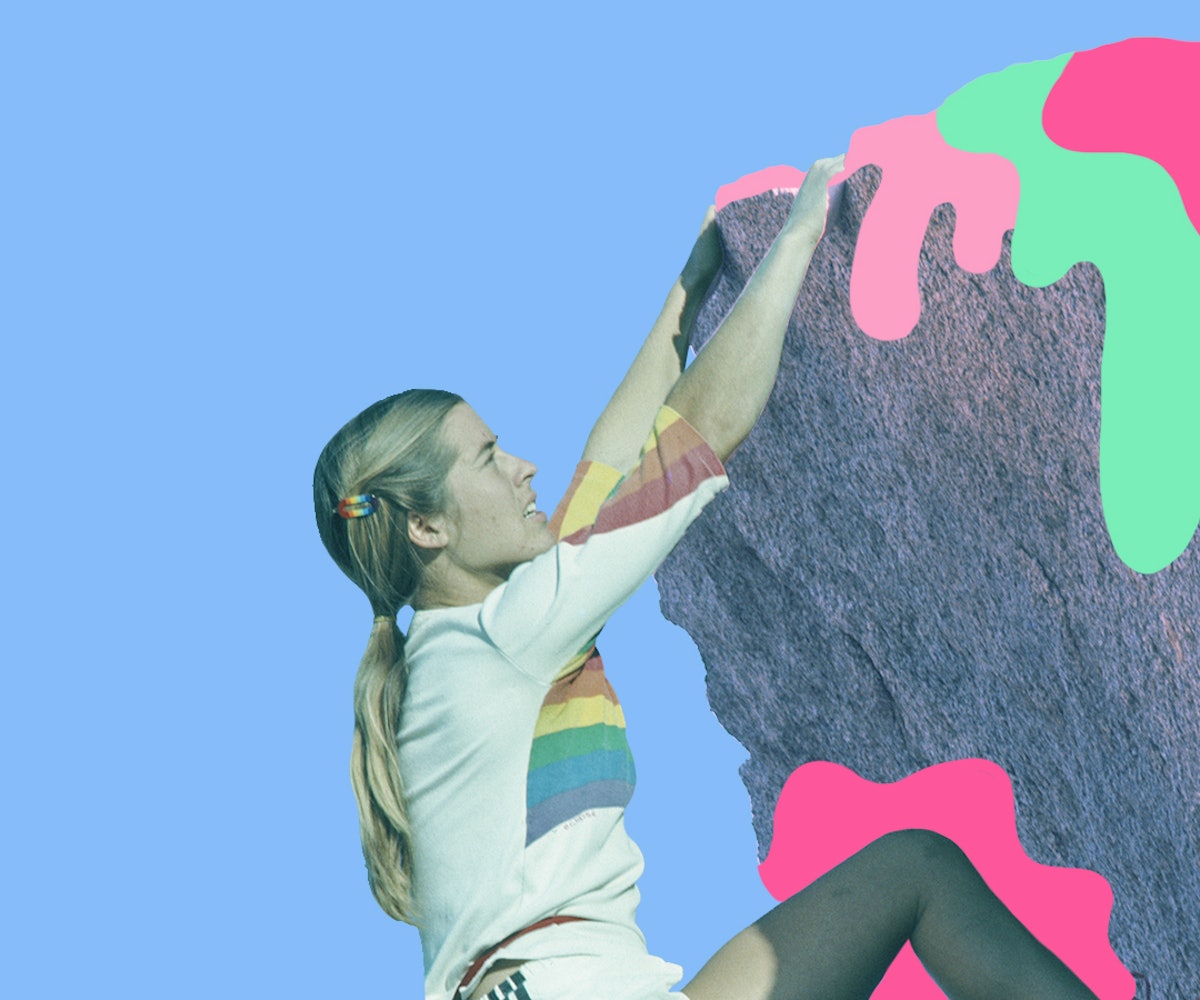 Climbers are inherently cool. Go into any climbing gym, and you’ll immediately feel at least a little intimidated by the casual coolness that they exude. Part hipster, part athlete, modern-day rock climbers make what they do look easy… until you try to climb a wall or a rock and realize, after just a few seconds, that this is way harder than it looks and you’ve already developed a massive blister.

Leslie Timms, one of the top pro climbers in North America and owner of On The Rocks in Collingwood, Ontario, has all the beta for you. (That means information, but we’ll get into that later.)

Climbing shoes: “Buy these ASAP,” laughs Timms. That’s because you need these tight, thin shoes to grip the rocks and hang on it weird situations, but also because while you can rent them at a climbing gym, that’s a little gross. The trick to these shoes is going barefoot, and it’s a little gnarly to borrow a pair of shoes that’s seen thousands of smelly feet.

Chalk bag and chalk: People at the gym don’t just put white chalk on their hands for fun, they do it to improve their grip. This is especially key if you have excessively sweaty hands.

Climbing pants or leggings: If you’re in the gym and bouldering, you can get away with shorts since you won’t need a harness. But your best bet for comfort is going to be leggings, says Timms. They protect your skin and allow for freedom of movement. She does warn that wearing leggings with a harness will cause your leggings to wear out at an alarming rate, though, so maybe skip the expensive Lululemon ones in favor of cheaper options if you’re low on disposable income. Climbing pants won’t be quite as comfortable, but they will be a lot more durable.

Harness: If you’re serious about climbing, you’ll want to buy a harness that’s the right size for you (always try it on before buying!), but if you’re just testing the waters, this is a piece of gear that’s cheap to rent in climbing gyms. Ditto belay equipment.

If you go to a climbing gym for the first time, it can almost sound like they’re speaking a different language there. Blend in by having some of the key terms memorized.

Beta: This just means information, so someone can give you the beta on the best way to climb a certain line.

Problem: What climbers call a specific climbing route (so each gym and most rocks will have multiple "problems").

Belay: What climbers do with the rope that’s attached to the harness to get you up and down the wall safely.

Hold: The rock or crevice that you’re grabbing on to.

Top roping: This is the climbing you see most often in a climbing gym, and likely did as a kid at a party or fair. A rope is affixed to your harness and loops up to an anchor at the top of the wall and down to another person, the "belayer" at the bottom. As you climb, the belayer takes up the slack of the rope, so if you fall or let go of the wall, they can lower you down gently.

Sport and "trad" climbing: These are the more adventurous types of climbing that rely on anchors in the rock or wall to keep you in place, versus a belayer on the ground. As you move up the wall, you clip your rope that’s affixed to your harness into new anchors. In sport climbing, the anchors are already in place. In trad, or traditional, climbing, you’re putting the anchors into the rock, and you’re responsible for taking them out. Neither of these styles is particularly beginner-friendly.

Bouldering: The easiest climbing style to learn with, bouldering keeps you low to the ground and avoids using any ropes or harnesses. If you’re new to climbing entirely, this is a great try-before-you-buy style, because all you need are climbing shoes and some chalk, rather than a harness and rope setup. It’s also less scary since you’re always close to the ground, and it's an easier way to pack in an efficient workout since you don’t need a buddy to run the ropes for you while you scamper up.

“For the first time, if you’re really keen and psyched on rock climbing, trying climbing outside is great,” says Timms. “Then, go to the gym, meet a bunch of climbers, play and learn from them, and take a course or find an instructor to teach you how to climb outside.” Climbing outside presents a lot more challenge (and danger) than climbing at a gym, so, for newbies, gaining confidence and skills in a safe setting can make climbing outside eventually a lot more fun—and the gym environment is great. If you’re an extrovert, you’ll immediately make new best friends, and even those of us who are more introverted get sucked into conversations and getting friendly advice from new people. And don’t be afraid to be a beginner! “I definitely recommend people learn from a professional. Don’t assume you can just figure it out,” Timms adds. She notes, however, that learning from a “great climber” at the gym isn’t as helpful as learning from a pro—you’ll just pick up his or her bad habits!

Train Before and While You Climb

Core strength, weight lifting, and cardio will give you major climbing gains, especially if you can’t spend every day in the climbing gym. “Climbing is a full body sport, and it gets you in great shape, but having the ability to do pull-ups helps climbers a lot,” says Timms. She also says a bit of flexibility is great, but being a little tight can actually make you more powerful (in case you were looking for an excuse to skip yoga). A lot of climbers will run for added cardio, she says, but emphasizing your core strength will provide the biggest gains. All the bicep curls in the world won’t help if your core isn’t strong. And for climbing-specific training at home, a hangboard (a board that resembles a rock ledge) can go on a doorway, and you can use it to gain grip strength and do pull-ups.

It’s common for new climbers to rely on upper body strength for climbing, using hands and arms to go from rock to rock. But that gets seriously exhausting and isn’t nearly as efficient as using your legs to push up and onto the next rock. “That’s the worst technique habit I see,” Timms adds. “For a lot of beginner climbs, an experienced person would barely use their arms, while a beginner will be exhausted from using them. Think of your foot as your hand, and use it like a monkey would, wrapping it around rocks." To perfect this technique, consider looking for a rock climbing guide who can take you through the paces.

Keep Your Arms Straight and Hips In

“Monkey climb with arms straight, swinging from spot to spot. You’re not going to be climbing exactly like that, of course, but the optimal body position you want is to have your arm straight so you can lean back and think of your next move,” Timms says. Plus, this position will help prevent fatigue and have you climbing smoother. As for the hips, they should be squared off as often as possible. That won’t always be an option, of course, since some moves require a bit of twisting and turning, but that should be your default.

Timms is a fan of both outdoor climbing and gyms, but she adds that the biggest mistake people make is skipping instruction and trying to climb on their own. Most gyms will require newcomers to take a quick class in belaying, so you have an idea of how the ropes work, but it’s absolutely worth taking a class at a gym or with a guide like Timms to get acquainted with climbing smoothly and efficiently. There are tons of subtleties to climbing, and just one session can make a huge difference.  (Broke? A lot of climbing gyms have early bird and lunch hour specials, plus ladies’ nights during the week, so look into local gyms and see when the best times to go are.)

Breathe In, Breathe Out

Relax as you climb and take a deep breath. “You can’t run without breathing, so why should you climb like that?” she asks. That breathing can also calm you down, so you stop your mid-climb panic when you realize that the ground is no longer right below you. (Timms also recommends, when you panic, stopping for a second and assessing the risk. If the panic and risk are rational, you can back off. If it’s irrational, be willing to face your fear and keep going. She says the more often she backs down from her fears on climbs, the fears get worse and worse.)

A mistake a lot of smaller climbers and female climbers, in particular, make is avoiding big, bold, dynamic moves, says Timms. “Learn how to be dynamic early,” she says, which means making big moves and jumping at rocks. “Practice making big long reaches, and don’t be afraid to be powerful… or to fall on your face,” she laughs. Don’t be afraid to try jumping for a hold, rather than struggling to reach it. The best place to practice? On a bouldering wall where you’re close to the ground, so a jump has low consequence.

This is a feeling you likely won’t be able to avoid, and it comes from too much lactic acid hitting your forearms. It’s called pump because your forearms seem swollen (and hurt like a mother). Stop squeezing, Timms says, and focus on keeping your arms straight when you can. And as you climb, when you can let one arm just hang, lift it over your head for a second, then drop it loosely to your side and shake it out. “It’ll look like a weird dance,” says Timms, “But it’ll feel better.” (If a climber in the gym tells you “sweet shake,” it’s a compliment, not a semi-offensive pickup line by the way.)

Think One Move Ahead

“You can’t think about the last move. Think about the current move,” says Timms. “Otherwise, you end up death-gripped to a rock for 20 minutes without being able to make the decision.” You learn more as you make mistakes, Timms says. “The more mileage you get on the rocks, the better you get at reading the rocks.” And if you need more instant gratification, start looking for midway points, ledges, or big holds that will give you a chance to relax. These mini-successes will help you get to the top.

Keep Your Hands and Nails Nice

Timms is a huge fan of the lotion-and-sock maneuver to help keep the skin on her hands from being completely callused. She says that a bit of callus is a good thing, but you don’t need to turn your hands into paws in the process of climbing. Simply slather on a rich lotion or cream and cover your hands before bed (there are manicure gloves made for this, but socks work, too). As far as nail care, Timms just says that keeping your nails short is the best option—long nails will never last against rocks.

Climbing outside? Etiquette dictates that you live by the "leave no trace" mantra. Bring your trash home with you.