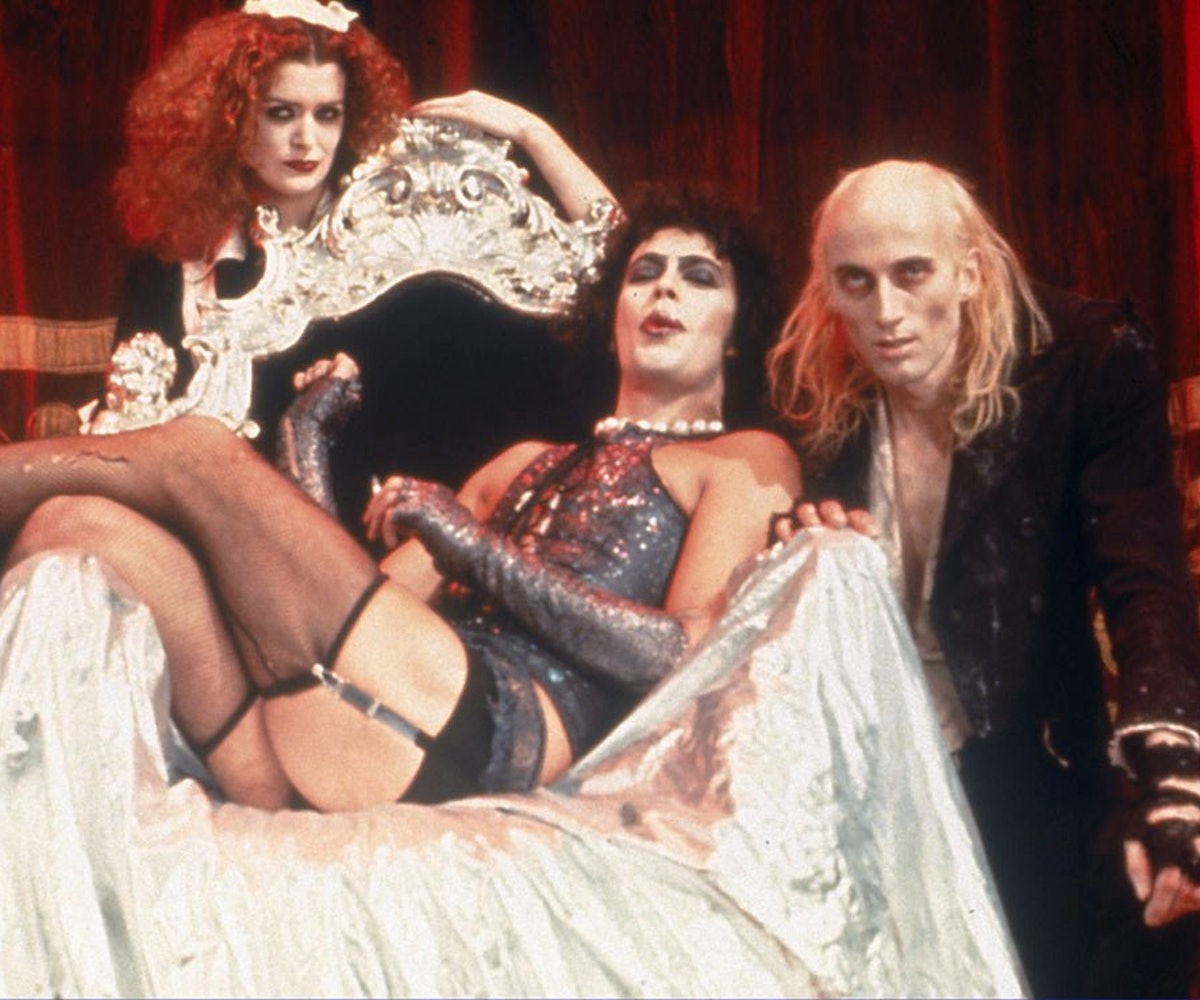 “Okay, let’s meet at 10, slam shots, and go,” my friend GChatted me after I convinced him to accompany me on my quest to pop my Rocky Horror Picture Show cherry. I responded, quoting some guidelines for RHPS virgins, "they say you're supposed to be sober the first time."

My friend wrote back, “I don't believe that. Seriously, you’re gonna want to be drunk for this.”

We met at a bar around 11, had a couple of drinks (we were by no means drunk, as I am a follower of rules), and ventured over to the midnight showing in New York's Chelsea neighborhood. Bad move number one: not arriving early. The line was wrapped around the theater, with high-school kids dressed up in corsets, fishnet stockings, and other borderline age inappropriate garb I would never allow my child to leave the house in making up the bulk of it. Bad move number two: not buying tickets ahead of time.

“The showing for tonight is sold out,” the ticket seller told us, noting that October is the show's most popular month. Of course. “Girl on the Train is playing, though, if you want to see that.” We didn’t. But we spent $30 on those tickets anyway, because we'd come up with the genius plan to sneak out of Girl on the Train and into the sold-out RHPS (I now take back that follower of rules part).

What follows is my live-screening newbie experience and the two-and-a-half hours of pure stream of consciousness that went along with it.

12:15: We stood on line downstairs just to stand on another line upstairs, cool. “I thought you brought your bustier?” one guy asked his girlfriend. I’m way too old for this.

12:20: We finally walk in and are greeted with people dancing in the front of the screen. “Oh my god. Wait, is this a middle school dance party or a movie screening? I’m confused,” I say to my friend. We sit down, and all I can think about is the fact that the strobe light is definitely going to give someone a seizure.

12:22: That “Scotty Doesn’t Know” song comes on. I’m uncomfortable, but this playlist kind of bangs.

12:25: The Darkness’ “I Believe In A Thing Called Love” starts playing. Dancing continues. Nope, I’m over it. I believe in a thing called sitting the fuck down. “Do they serve alcohol here?” my friend asks, to which I reply, “I don’t think so.” “Then how are they doing that without it?” Touché.

12:30: People finally start to sit down and a guy with a painted white face comes into the spotlight. He must be the host of this extravaganza. “Welcome to the greatest fucking musical in the world,” he blurts out. I mean, sure, but I do really love Rent. So, debatable.

12:35: Talk about virgins coming to the front begins. I turn to my friend as he starts to raise his hand to call me out. I force his arm down. “I swear to god, I will never talk to you again. That’s a promise, not a threat.”

12:40: A shit ton of virgins make their way to the front, as the host announces their task: faking an orgasm. Honestly, even if I were up there, now would be the time that I would literally sprint back to my seat.

12:45: These people are surprisingly good sports, despite the host’s lack of enthusiasm toward their moans. “Coming to Rocky Horror is probably the biggest fuck you’re going to get,” he says to one guy. His brutal honesty isn’t off mark, though. Some are hits, most misses, and others have probably never even experienced a big O, given that they’re basically all 14 years old.

12:50: The movie finally starts and so does the… live reenactment. Wait, so somebody is lip-synching the song as it plays on screen? Okay, this is very meta.

1:00: Okay, so the live reenactment is happening during the entire movie? Cool. The shouting, too? This is literally any devoted moviegoer's worst nightmare. Good thing the internet has taught me how to multitask.

1:13: Plot-wise, I’m not sure what’s happening, but I’m thoroughly entertained.

1:15: Oh, the “Time Warp.” I’ve heard this one. More dancing, but at least this situation is choreographed.

1:30: How many times have these people seen this movie? At least a hundred, right? I’d love this a lot more if it wasn’t 1:30am right now.

1:40: Okay, my eyelids are getting very heavy, not even this corny sex scene can keep them open.

1:45: My friend has passed out, but a very well-placed Harambe joke brings me back to life. This place is where political correctness comes to die.

1:50: Honestly, that neck joke will never get old.

2:00: Things are still happening, and I'm still chuckling, but this probably should’ve ended 30 minutes ago.

2:30: That was riveting, but I've never missed my bed more. “Thanks for coming! If you didn't, better luck next time,” the host quips on our way out.

When I first told people that I was going to the show for the first time, I was met with a lot of “LOL, good luck” responses from pretty much everyone. I understand their reactions better now—especially after realizing their snark probably mostly had to do with the virgin bit. To put it lightly, it’s a truly unique and bizarre experience, particularly for first-timers. But I also understand why people seek it out weekend after weekend.

While the audience participation aspect, the live-action renditions, the dancing, the overwhelming distractions from the actual movie are annoying for the first 30 minutes, after a while, you start to realize that that’s what makes the two-and-a-half hour experience so intriguing. It’s why the film catapulted to cinematic cult fandom in the '70s and has stayed there ever since. RHPS has helped bring together a group of quirky outsiders, misfits, loners, whatever your descriptive noun of choice, and formed a loving community out of them. A time warp tribe, if you will, where they’re free—encouraged, even—to be their most out-there selves.

Those who shout lines, throw pieces of bread in the air, and act out scenes from the screen, are all members of a weird extended family, but even those on the so-called outside are greeted with a hearty fuck you (a sense of endearment, in RHPS speak). Which brings me to my next bout of praise: the genius humor. In the days of 2016, where everything is viewed through an ultra-sensitive lens, it's nice to see people still making crude, completely inappropriate, highly offensive jokes that also happen to be really fucking funny. There’s no censorship involved—a refreshing aspect of the experience, as long as you don’t attend with your parents and/or younger sibling.

Fox is remaking Rocky Horror Picture Show into a made-for-TV movie, which airs tonight. And though I understand Hollywood’s interest in tapping into the subculture the film’s created, I can’t help but think it going mainstream is exactly what Rocky fans wouldn’t want. But, if we’re being honest, I wouldn’t pass up a live screening if the invite came along. Just as long as it doesn’t start at midnight.