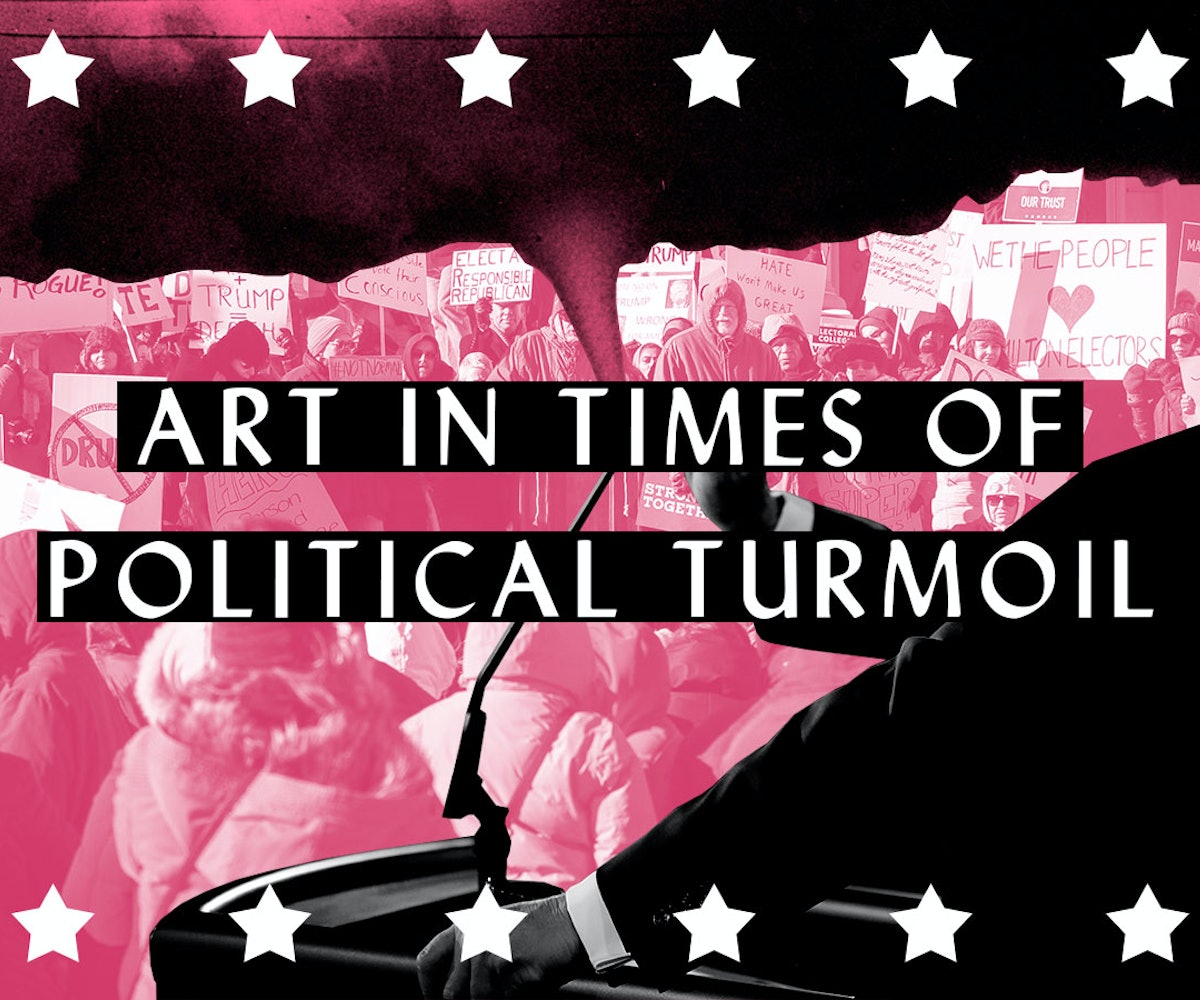 Art can be a scary word. It's entertainment, but it's also arresting. It's a vehicle for thought and can be a catalyst for rebellion. Times of political turmoil have spawned and been influenced by seminal works of art, like Eugène Delacroix's "Liberty Leading the People," Roberto Rossellini's Rome: Open City, and Pablo Picasso's "Guernica." Andy Warhol's Death and Disaster Series, too, was a commentary on the media's increasing coverage of violence and the subsequent desensitization of the public (and then further numbing via staring at Warhol's screenprints). It's through art that we come to better understand our place in history, engage with different ways of thinking, and reflect—that is if we allow ourselves to.

With Donald Trump's inauguration into the White House a fortnight away, questions of whether art will be influenced or have a greater influence ring loud. Ahead, eight artists featured at last December's Day For Night festival share their beliefs about art's role in times of political turmoil.

It's very scary right now, uncertain, and disorientating. I don't think art has any one specific role—well I guess there is; the role is to raise questions. Sometimes they can be political questions, sometimes they can be questions about the celestial bodies in the sky. The great thing about art is that it has space and the freedom to impose some kind of important questions that are difficult to ask in everyday society. If anything, the thing that is most frightening is the current political climate doesn't seem to put much value in culture and in art. If art gets forced into a corner or people are afraid to express their true feelings and thought through art, well that’s a very bad thing because there is no outlet for new ideas and room for different opinions. For light, there needs to be darkness, and we are going into a dark period. Hopefully, that will reinvigorate people's passion and produce better art. It has done historically, like the punk movement. — Matthew Clark of United Visual Artists (UVA), a London-based art practice that specializes in site-specific installations, usually associated with light.

There was an early period of my life where I used to question the value of art. Social crises are, perhaps, moments when people realize the importance of expression through art, but that could also be the moment when people don't have any mental space to think about art. That's the time to try and understand it. That's maybe why [NONOTAK] always tends to create art that plays with the audience's visual perception and engages them directly, no matter the cultural background they come from. Art needs to be able to affect people from any cultural context if the aim is to have a social impact through it. — Takami Nakamoto of NONOTAK studio, a duo comprised of illustrator Noemi Schipfer and architect/musician Takami Nakamoto who make light and sound installations.

Michael Fullman: Art is, in some ways, escapist, but also the biggest thing, that's most important to me, is the amount of inspiration it can provide. Things are shitty right now, and I think for people to go and still see amazing pieces of work is a reminder that things aren't so fucked-up.

Fullman and Fraboni are a part of VT PRO DESIGN, a firm that specializes in lighting design.

Art has a social role—especially in bringing people together. Art has the power to promote social change. I think people are really trying to want to make strides to mobilize and create works that have more social meaning and real social power, that can bring people together and dismantle power structures. It doesn't have to be, but art can be subversive and punk, or it can be pretty blatant. It's important to give people a big canvas to work with. — Ezra Miller, an artist and designer living in New York City.

The beauty of art is you have something that forces people to think and be still for a moment. Everything is very precise and efficient now; disrupting that with art that's hard to pin down provides an escape. That's something the public needs: space to free up the imagination. — Robert Seidel, a Berlin-based artist focusing on site-specific installations, light, sculpture, and video.

The arts are becoming a hybrid field. There's art you see in the Chelsea galleries [in New York City] and the art institutions, sanctioned by the art establishment, and then there's art by people who are inspired by the future. Call it “new media art,” call it “digital art,” but that doesn’t cover it all. Curation is really about finding where people are going, being interested in a movement, and hoping people will have an experience with it. Right now, all artists have to ask themselves how they are going react to the current situation that we are in, whether it’s politically or not. Some art should be about engagement in our society, culture, and daily lives. Other art is about how we continue to evolve overall as humans. — Alex Czetwertynski, Day For Night Visual Arts curator/digital artist.

I think even if the artist doesn't necessarily lean toward any political party or political ideology, everything, on some level if you look hard enough, can probably be reduced to politics. So even if you have absolutely no intention of involving politics whatsoever, I think that probably leaks in. I think you can lean toward the right or lean toward the left— sometimes strongly, sometimes mildly. We are entering a stage where, to be honest, with the political climate now and the way things are changing, I think people who do lean toward love and acceptance and having an open heart toward all people and all walks of life are gearing up for a clash of ideologies and ways of life. Unless we want to go back to the Stone Age, I think we need to get ready to push forward with everything we've got, and art is a great vehicle for that. — Damien Echols, multi-medium visual artist.

I think that things like music and art serve the community in two ways: The first being a chance for artists to tap into some unknown source—some might say a divine source—and to be a link between that source and the audience to bring beauty, to bring escapism, to bring messages—sometimes beautiful, sometimes not, sometimes angry, but always poignant. Art does the same thing; it creates this link to the beatific. Music, especially in dance music culture, has been the only place in the occidental world where we have a ritual; we have a tribe of people from all different backgrounds and sexual identities coming together on the dance floor where everything drops, and it's just that synchronized movement and thought and beauty that comes through dancing. The role is to escape. — Christine Renee, music artist and DJ.