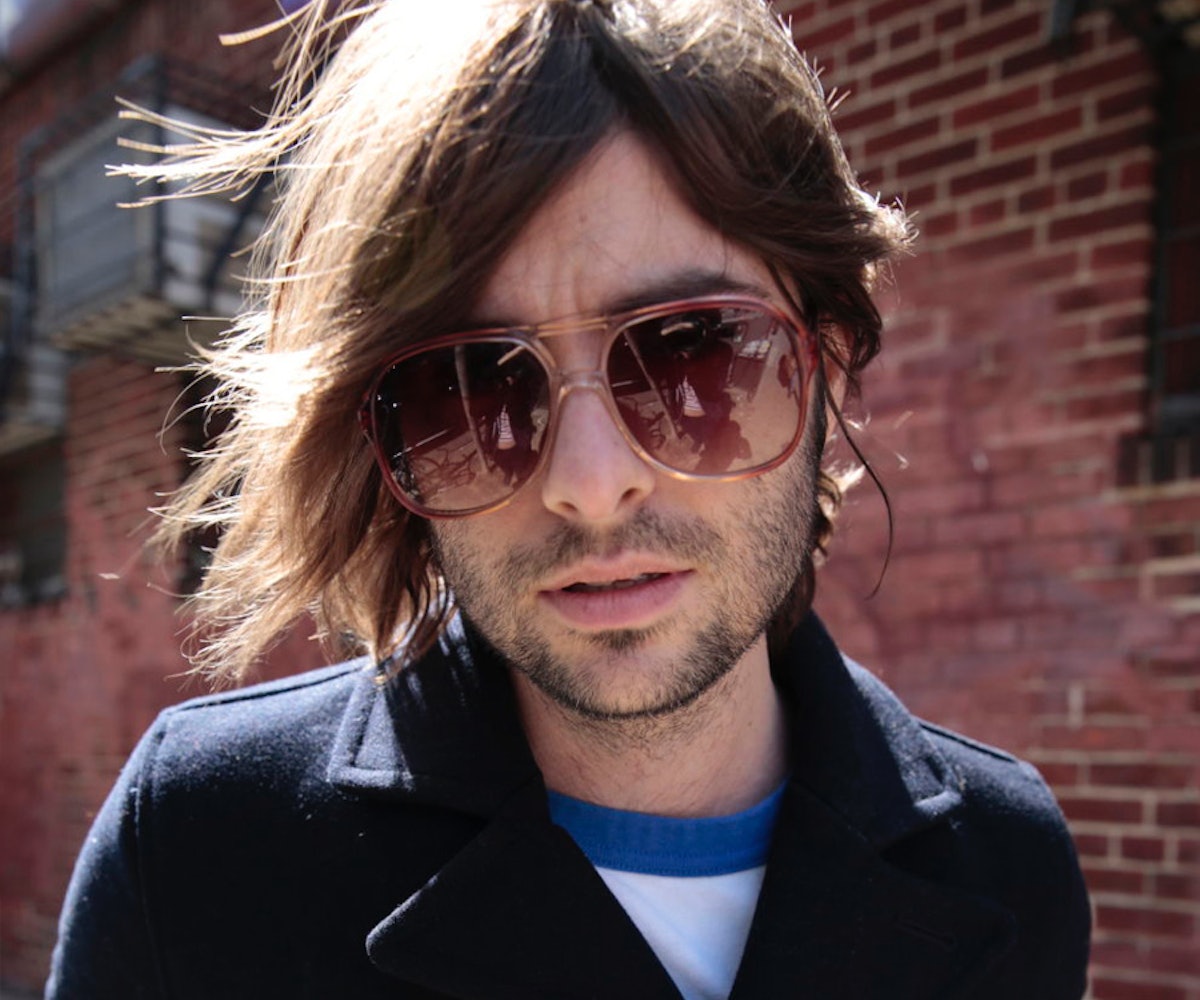 At Milano’s Bar in New York City’s Nolita neighborhood, Robert Schwartzman leans against the picture-covered walls of the classic dive, sipping hard cider while chatting with his girlfriend and photographer Zoey Grossman. The bar opted out of hosting our shoot on this busy Saturday, but the Rooney frontman still wanted to swing by.

Why the dedication to visiting this little watering hole? Because along with the Mercury Lounge, it’s part of today’s trip down memory lane. Schwartzman moved to the East Village in the fall of 2001 to attend Eugene Lang College at The New School, and these were his regular spots. “While I was living in New York, I had a lot of friends who grew up here and they were all musicians,” he says. “I would play in other bands for fun, just to stay busy with music, and I got a taste of what it was like to be in a band in New York City. We’d rehearse on Ludlow Street and then come to this bar and have a beer.”

Which leads us to Schwartzman’s secret: Despite its quintessential California sound, Rooney’s self-titled debut album, released in 2003, wasn’t written in the Golden State, but rather mostly from his Manhattan dorm room. “Rooney has been defined as a Cali band and that’s by no mistake; there was a real conscious decision to embrace the California lifestyle,” he explains. “But a lot of those songs were written in New York City.” As Rooney were starting to take off, Schwartzman would fly back to California once a month to play shows with the band. He eventually left school after one semester to pursue music full-time.

Now, after a six-year hiatus, Rooney are back with a new album, Washed Away, which dropped in early May. Schwartzman wrote, produced, engineered, and mixed everything himself. While you can hear twinges of his synth-heavy solo work, it’s still classic Rooney, with their signature sing-along, catchy, melodic pop-rock. The infectious “My Heart Beats 4 U” makes you want to drive around with the top down, while “All the Beautiful People” is the perfect kickoff to a dance party.

Listening to Washed Away won’t just put you in a good mood; you’ll also realize it’s a true album. “I wanted to make a really good record from track 1 to track 13,” says Schwartzman. “I want the listener to feel inspired every step of the way and not skip over a song.”

But nostalgics, never fear: Rooney classics from earlier albums will still be in rotation at their shows. Schwartzman relishes the blend of old and new. “What’s cool about making a new record is you get to add more songs to the mix. When I make a setlist, I can pull from so many albums from yesterday and I can add from today and tomorrow. When I play these songs live I feel very excited and passionate. It feels like it did the first time I played it. When you take a break, you feel that same innocence and original spark you had when you first started.”

In case you’re wondering what Schwartzman was doing during those years away from Rooney, the answer is a lot. He made two solo albums, launched an iPhone app for musicians, and co-scored the critically acclaimed feature film Palo Alto, directed by his cousin Gia Coppola. (Yes, he’s part of that family. His mom is Talia Shire of Rocky fame, sister to Francis Ford Coppola, and his dad was film producer Jack Schwartzman. Jason Schwartzman is his older brother, and Sofia Coppola and Nicolas Cage are also cousins.) “I grew up around filmmakers and on movie sets,” says Schwartzman.

Now, that’s coming in handy as Schwartzman is releasing Dreamland, a full-length feature film which he wrote, directed, and scored. Fittingly, the movie focuses on music—the protagonist is a struggling pianist who has an affair with an older woman—and his brother Jason appears in the flick. Schwartzman is no stranger to being in front of the camera, either: He famously appeared in The Princess Diaries and The Virgin Suicides, and more recently an indie comedy and a few shorts. “I’ve kept a tiny pinky toe in the waters of acting with the hopes of revisiting that part of myself,” he says. “I’d love to be in a movie I can direct and have that experience.”

For Schwartzman, no matter the project, it’s all about making art. “There’s not one lane—it’s all one world,” he says. “It’s a pipeline of creative output. Whatever it may be, it’s channeling the same part of myself, which is getting to make something new. Whether I’m sculpting out of clay, acting, directing, or making an album, it’s literally all the same thing.”