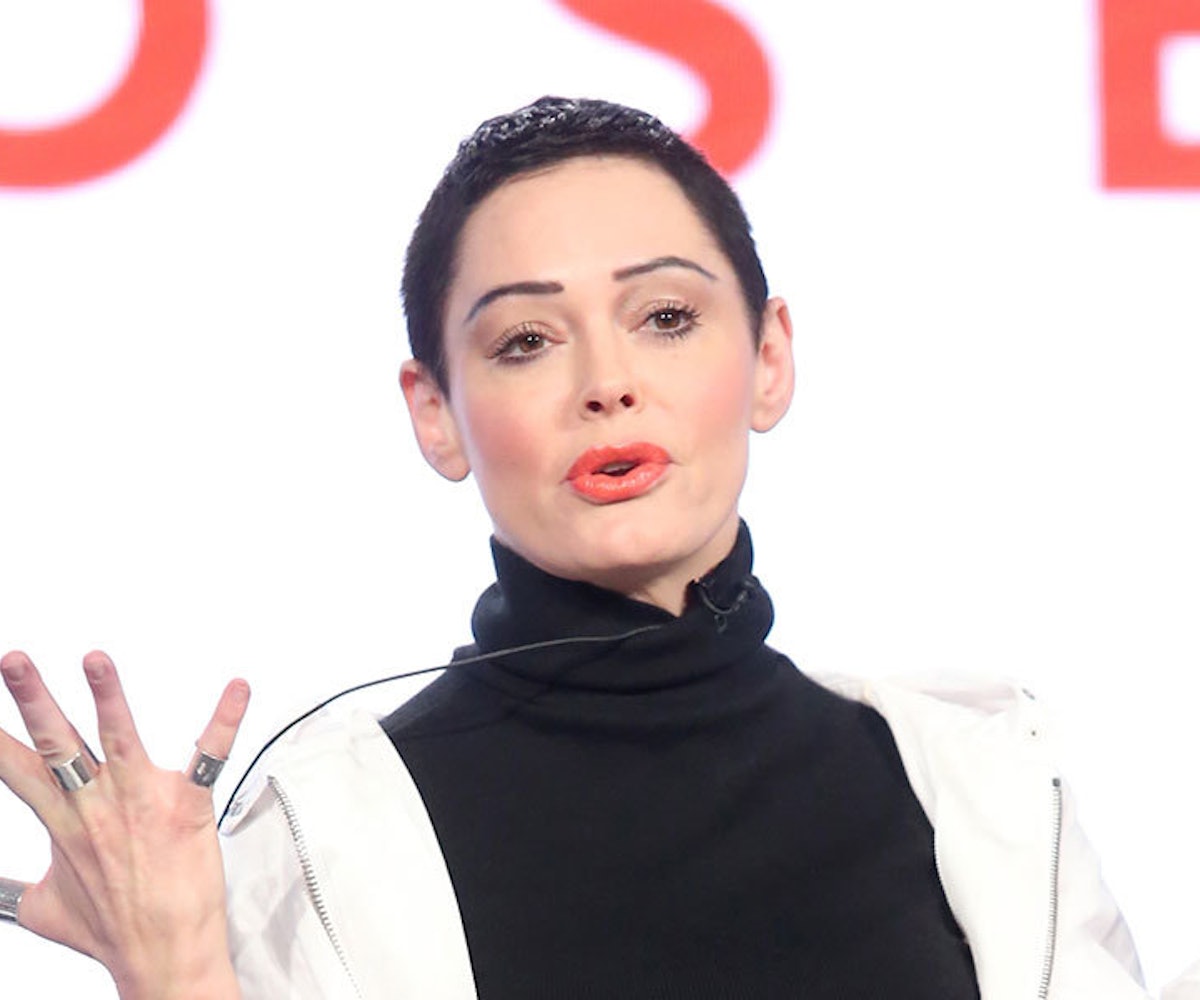 Earlier this week, Rose McGowan's press tour for her new memoir, Brave, turned into what some people are calling "a meltdown." During a Q&A portion at the Union Square Barnes & Noble in New York City, McGowan was asked by a trans woman to speak about the controversial comments McGowan made on RuPaul's What's The Tee? podcast last July. It did not go well.

Let's rewind: Last summer, McGowan told Ru and his cohost, Michelle Visage, that trans women "assume [they are women] because they felt like a woman on the inside. That’s not developing as a woman. That’s not growing as a woman, that’s not living in this world as a woman and a lot of the stuff I hear trans complaining about, yeah, welcome to the world."

Essentially, McGowan is saying trans women are not like other women because they have not experienced the same type of catcalling and harassment that comes with female body development. Like, how dare a trans woman complain about being a woman when they don't have a female's anatomy? McGowan's position ignores the fact that violence and harassment toward trans women, especially trans women of color, is disproportionally high compared to that of women and other marginalized communities. Trans women live in the world as women with bodies that are statistically more at risk of being abused, mistreated, or worse.

Cut to January 31 when the aforementioned "meltdown" happened. "I have a suggestion," the trans woman began after standing up. "Talk about what you said on RuPaul. Trans women are dying, and you said that we, as trans women, are not like regular women."

McGowan said, "Hold on. So am I. We are the same. My point was, we are the same. There’s an entire show called ID channel, a network, dedicated to women getting abused, murdered, sexualized, violated, and you’re a part of that, too, sister. It’s the same."

The audience member said McGowan does nothing to support and protect trans women. "What have you done for them?" she asked.

"What have you done for women?" McGowan asked in response. They shouted back and forth before Barnes & Noble security escorted the trans woman out of the store. "This is white cis feminism," the woman yelled as she exited.

"You're so boring," McGowan continued:

Don’t label me, sister. Don’t put your labels on me. Don’t you fucking do that. Do not put your labels on me. I don’t come from your planet. Leave me alone. I do not subscribe to your rules. I do not subscribe to your language. You will not put labels on me or anybody. Step the fuck back. What I do for the fucking world and you should be fucking grateful. Shut the fuck up. Get off my back. What have you done? I know what I’ve done, god dammit.

The crowd cheered, "We love you, Rose," in an attempt to console McGowan, who continued to say she's "mad with the lies. I’m mad that you put shit on me because I have a fucking vagina and I’m white or I’m black or I’m yellow or I’m purple. Fuck off. All of us want to say it. I just do."

After calling for people to stop "boxing everyone into shit," McGowan started to read from her book, but soon stopped and said:

Trans women are women and what I’ve been trying to say is that it’s the same. The stats are not that dissimilar. When you break it down, it is a much smaller population. There’s not a network here devoted to your fucking death. There’s not advertisers advertising tampons with a camera lovingly going up a girl’s body as she’s being lovingly raped and strangled. Piss off. And until you can collect that fucking check, back up. My name is Rose McGowan and I am obviously fucking brave.

Okay. There's a lot to unpack here. This happened at an event dedicated to McGowan's book, Brave, which puts her personal history of sexual abuse and rape within Hollywood out in the public. She is a victim and a survivor telling her story. Variety reports that the audience questions were screened, presumably to keep the focus of the night on McGowan's story. Bringing up What's The Tee? and McGowan's history of transphobia was not in the cards. Still, it happened.

McGowan says she is brave. Yes, she's brave for sharing her story. There's no denying that. But her response to the audience member was not brave. It was bullying. It highlighted the disconnect between McGowan's narrow-minded feminism and the more inclusive feminist movement. What McGowan said at Barnes & Noble and what she said on What's The Tee? are not dissimilar. Both reinforce her idea that there is no room for trans women in her feminist fight. She vilified a trans voice speaking truth to her power and privilege as a cis white woman. That's not feminism. There's nothing intersectional about it. To invalidate someone's experience as a woman because they weren't born with female anatomy further promotes the idea that trans women are not women. Yes, a woman with female anatomy will have a different experience growing up and navigating the world than a woman without female anatomy. But to exclude trans women in the manner McGowan did and does is entitled.

NEXT UP
Fashion
Reformation & Canada Goose Team Up To Warm You Up
Culture
Not One, But Two BTS Documentaries Are Coming
Culture
Spotify Wrapped Is The Only Social Media That Doesn’t Lie
Astrology
Your Natal Saturn Placement In Astrology, Explained