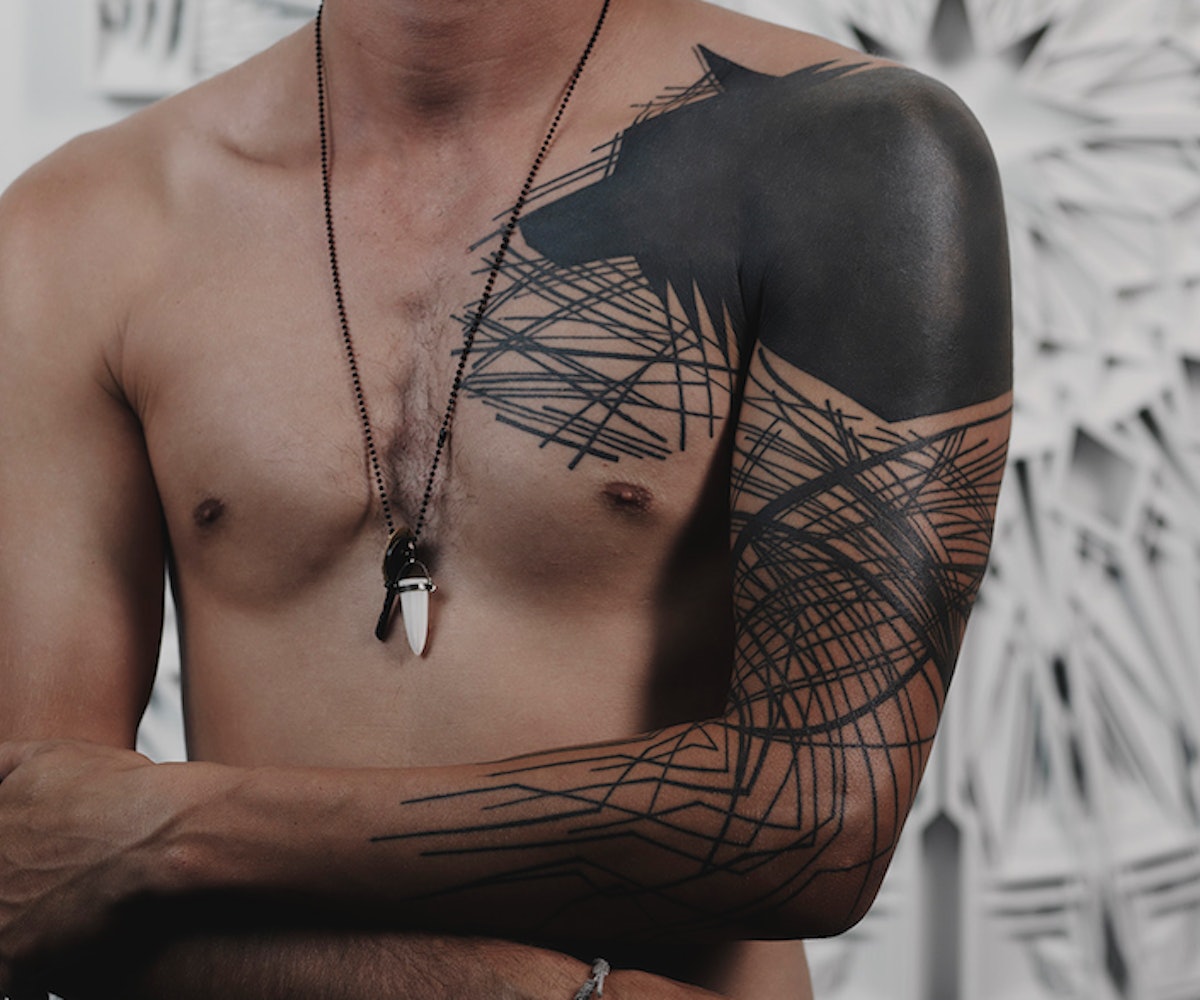 When viral tattoo artist Roxx first received the email that New York City's Museum of Modern Art wanted to show her work in its "Items: Is Fashion Modern" exhibit, she and her partner thought it was spam. "She literally told me, 'The MoMA wants to do a fucking exhibition,' and I was like, 'What?' I seriously didn't believe it was actually gonna happen in reality until I was at the opening and saw my work there," Roxx tells me over the phone. "It's still taking time to settle into my brain because it just doesn't compute. I'm so honored to be in that and have that on the list of things I've done in my life before I die."

But fans of the London-born, L.A.-based artist's work agree that the inclusion does compute. To them, and frankly anyone with eyes, her work is and should be regarded among some of the finest modern works of our time.

Roxx, who is known for her impossibly clean line work, minimalistic design, and spiritually-derived pieces, has been tattooing people for nearly three decades and in six different countries. If this isn't an impressive enough résumé already, people from all over the world fly to L.A. just to be tattooed specifically by her, and some only by her, because of her ability to manifest deeply personal designs for each of her clients—designs that Roxx fosters on the spot upon meeting them for the first time.

But, even after 30 years in the industry, Roxx is still amazed that people love her work and actively seek her out. "I still don't believe it—it blows my mind. You just flew across the world for me to do these black scribbles on you? I don't get it, but I'm glad they do."

Get to know Roxx in our interview, below, and be sure to visit MoMA's "Items: Is Fashion Modern" exhibit, which runs through January 28.

Can you tell us a little bit about how your journey began?

I started tattooing in the '80s. In 1985/1986, I start hand-poking my friends when I was a punk rocker in London, and I fell in love with tattooing. I grew up going shopping with my mom when I was really young and seeing all of the punk rockers and skinheads and people like that around, and I thought they were fascinating, and I decided that I would become one of them when I could. And tattooing was just a great way to be an artist in that subculture.

You do your work the moment you meet a client. That's a lot of pressure. What's that process like?

I love working under pressure—the fact that the tattoo has to happen on this day because this person has flown halfway across the world to come see me. I perform best under that kind of pressure. It’s a little scary for the client sometimes, but they usually can look in my portfolio, and they’re like “Oh, I totally trust you to do whatever.” They generally show me stuff that they like that I’ve done and then I go off of that basically, on the principle that “a picture is worth a thousand words” kind of thing. If I have an issue, I ask people to really narrow down what they like. And then I design it on their bodies, usually with a pen. And they get up and look in the mirror and then I tattoo it. I mean, it’s a little bit stressful, but I’ve gotten used to it now, and it just brings out the best in me.

Do you have a favorite tattoo memory you've shared with a client?

Some of my favorite ones are usually either the really shocking pieces or the kind of spiritually healing ones, the things I’ve done for like breast cancer survivors, I’ve covered up concentration camp numbers in Amsterdam. I’ve done things like that that are really beautiful that I’ll carry with me forever.

You get the odd person now and again who’s just really hardcore. Like one of my favorite ones is this woman who wanted her throat tattooed, I figured, to feel less vulnerable. She worked with really troubled kids, and they were really violent and difficult to be around, and she just needed some protection. And then there’s, you know, another guy who like needs a huge cover-up on the side of their neck, and then we made some crazy, abstract, modern art type thing on his face and neck.

You’ve been in the industry for nearly 30 years. What changes, positive or negative, have you seen?

Tattooing is super mainstream now. A lot of that's great, you know? I think it's wonderful that young kids are doing really more art-inspired tattoos, there's more of a vocabulary for people to express themselves, get any kind of tattoo they want, which I love. I think there are a lot of hacks in the industry, too. That's a bummer. People giving people diseases or bad tattoos that you have to fix later, ruining people's lives, but in the end, they're all gonna come to a good person to fix it, so I mean I guess it's not such a bad thing... I also don't like that a lot of people are really very loose about stealing other people's work. I think that sucks. That's the part I hate the most. I've slowed down posting a lot on Instagram and stuff because I would shortly see my stuff ripped off within 48 hours.

I love the way that tattooing is really becoming a major art form, and it's more inclusive than it ever was for queer people like me, who have always been outsiders in this industry. I love tattooing, I'm always gonna love it, you have to just go through and ride out the changes with it. Personally, it's all been really positive for me. I know other tattooists are less able to adapt to what's going on. It's an interesting time in tattooing. I don't know where it's gonna go, I don't know how it's gonna hold out, but it's really great to be part of whatever way it goes.

Have you yourself changed as an artist?

Well, I will get really bored of people coming in and asking me for this style that I did like three or four years ago, and so I'll just change things because I don't want to do it again or I don't want to do something similar and I'll just push myself to a point where something new comes out because I can't bear to repeat or even closely resemble something I've done. When you're creating all the designs, it's hard to just, like, kind of be schizophrenic with yourself. You keep evolving with it, you make sure you kind of force yourself to not go down the road that's comfortable for you.

Are there any artists whose work you admire that's the complete opposite of your style?

Oh, absolutely. Artists like Sasha Unisex, who does these watercolor-inspired tattoos. Pis Saro, too, she does that botanical stuff. She stencils it on with a plant first and then tattoos it I think. Those things are fabulous, they're really interesting. I know a lot of the tattoo community would find that hilarious, but I think it's fabulous. I love people being creative, I love people doing things differently. I love seeing all this young energy in tattooing. I think it's just wonderful what people are doing now. It's really inspiring to me.

What would you do if you weren’t a tattoo artist?

Before the universe stepped in and said, "Oh no, that's not going to happen," I really wanted to be a horse trainer. I was so a horsey girl. That was my thing. When I was about my 15, I had a really bad accident. And my left leg was crushed, and I couldn't do that anymore. And I had to be like, "What else am I gonna do with my life?" And that's when I figured out tattooing. So that's what I do on my time off, I'm very fortunate to have horses, and I ride all the time when I'm not tattooing. Honestly, it was my 15-year-old self that decided that I would be a tattoo artist, but now, if I weren't tattooing, I would want to be a photographer.

NEXT UP
Life
All Hail The Maximalist Hairstyles Of Everything Everywhere All At Once
Entertainment
Jessica Biel & Melanie Lynskey On Axe-Murder Drama 'Candy'
Entertainment
The 5 Must-Listen Tracks From Kendrick Lamar's 'Mr. Morale & The Big Steppers'
Entertainment
'They/Them' Is The Horror Take On Conversion Therapy Camps