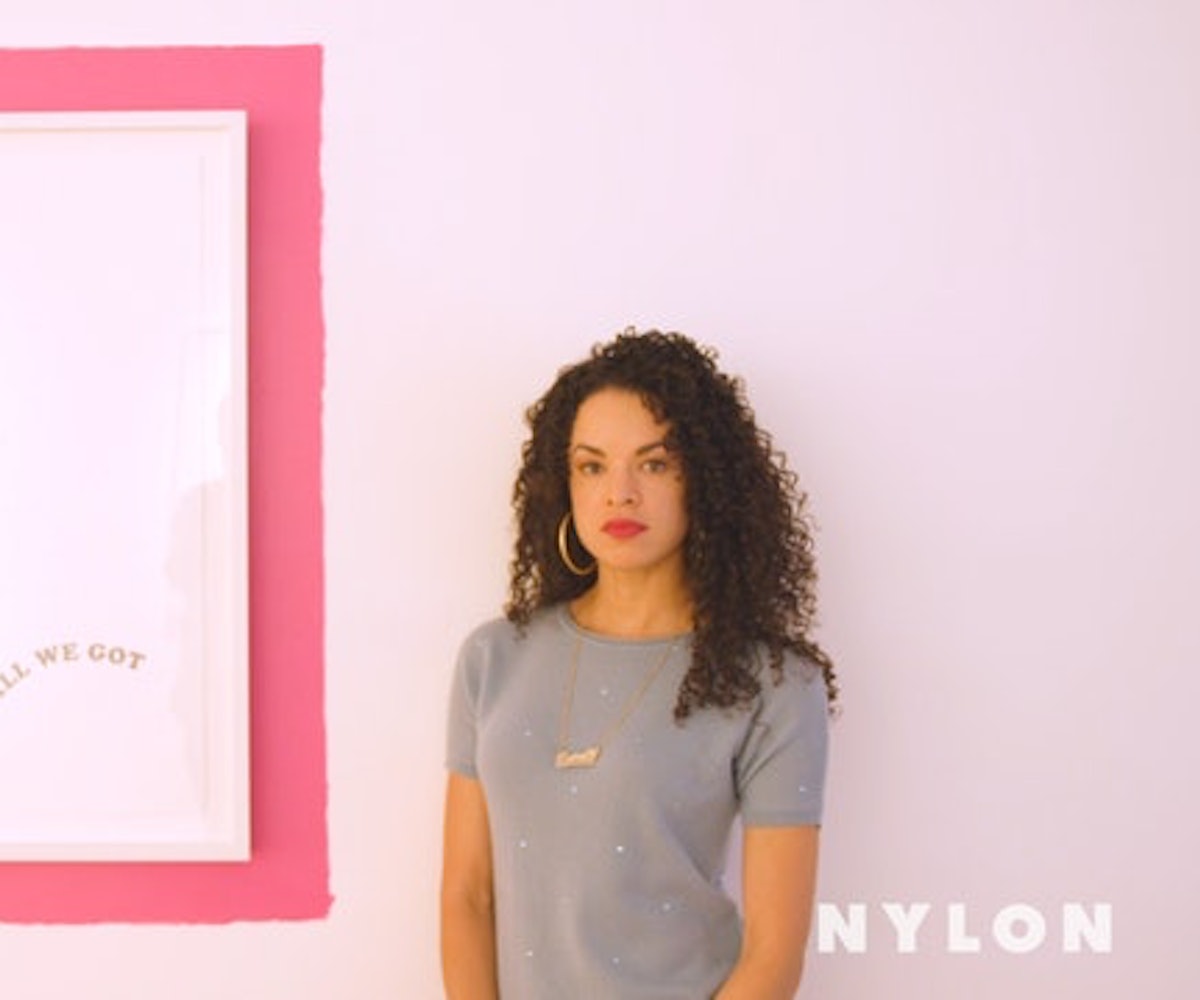 You could say that Sadie Barnette was destined for work that requires action. The 32-year-old visual artist is the daughter of parents who have dedicated their lives to workers. Her father, Rodney, was a union representative for nurses while her mother was a labor commissioner for their home state of California.

"Labor work is their way to still engage in activism and service while also having stable jobs and raising a child," she says. "It was always a part of my table conversations, thinking about how things affect people in a larger context. Yourself and your job and what it’s doing for you, and always have a systemic analysis of the things that are affecting our community that are part of a larger system of oppression that needs to be addressed."

After serving his country in the U.S. Army in Vietnam, Rodney became heavily involved with the Black Panthers chapter in Compton. Later on, he opened the first black gay bar in San Francisco. With a background like that, you might assume that Sadie would automatically follow in her parents' footsteps. She wound up taking the creative route, but Sadie's talent for visual art didn't come to fruition until she was in high school. (Prior to that, she was a dancer, figure skater, writer, and spoken-word performer.)

"I had always hoped that my daughter would grow up to be an adult whose politics were progressive, whose talents were artistic, creative, political. Sadie’s mother and I never forced our views of things on her, though I think she was influenced somewhat by our lives. But she has chosen what she’s done with her own life, through interactions with the community, her peers, her own self-education. And we couldn’t have asked for more, could not be more proud of her," says Rodney. "My own father never imposed religion or politics or even civil rights activism on his children; we thought it was our responsibility to learn and make our own decisions. But he was influential in the sense that he always shared his extensive knowledge of African-American history and encouraged his children to value our heritage and follow our own strengths and interests. Both Sadie’s and my politics have been dictated out of necessity—you do what you have to do."

Sadie's latest solo exhibit Do Not Destroy serves as a reclamation of her father's historic legacy. All of the photocopies on display are official documents created by the FBI that the Barnettes obtained through the Freedom of Information Act (FOIA). Now, spectators can get a small glimpse of the 500-page file through a bedazzled, sparkling, and pink-painted lens. Rodney admits that he never would have expected to be a part of Sadie's visual art—it came as a surprise when he found out how determined she was to make a project out of the surveillance files.

"I could feel that she was outraged when she saw these files, at the degree of harassment of me and our family," he said. "The files themselves led us to understand that there must have been surveillance like this on thousands of innocent people, people who only wanted to correct injustices, people like me, a law-abiding productive citizen and wounded veteran with a Purple Heart. What I am so happy about is the fact that this art is serving the purpose of educating Americans about the government’s willingness and ability to commit constitutional injustices against its own citizens. Although it’s not my personality to seek fame or be in the public eye, it is what it is."

Do Not Destroy is on display at Baxter St. Camera Club of New York until February 18. Watch Sadie give us a tour of the space in the video, above. To learn more about Sadie's personal history, read our interview, below.

When did art come into the picture for you? A lot of artists will say that they’ve always liked drawing since they were kids, but was it something that you grew into early on or were you older and fell into it?

The first time that I realized that I had things to say and had a creative outlet was with this organization called Destiny Arts Center in Oakland. It’s dance and arts, and they talk about it as a violence prevention thing through the arts in Oakland.

To be honest, I felt like [my high school was] a prison pipeline and that the school wasn’t serving people as individuals. There was a lot of tracking, it was hugely underfunded and there was racism within the school and criminalizing of students. So I checked out of high school and the only thing that saved me was photography. I went on an independent study program—and probably gave my mom a panic attack from dropping out of high school—but there was a dark room at that campus and I was able to print photographs all day and that was basically what I did. Everybody was applying to college and I was like, 'Well, I guess I can apply to art school. There’s no way that I can go to the UC system.' So I applied to CalArts and that was the one place I applied to and I got in and it just totally changed my life. That was where I really found out about the art world and contemporary art and that you can be a multimedia artist and that was really when I committed to doing this.

Why did you decide to get your MFA? What was the value of that experience for you?

I guess especially being someone who struggled in school, and then after graduating from high school I didn’t even have the credits to go to a UC system... but then after I went to art school I ended up doing my MFA at a UC and that felt very much like a victory to me. Even if you don’t learn or succeed in the traditional ways, I still made a path to get two degrees which I’m sure many of my high school teachers would be very surprised to learn.

"I think just continuing my education, continuing to dialogue and having a group of genuine, dedicated students who I was on this journey with was really invaluable. The people whose opinion that I hold the highest about my work are fellow cohorts from when I was at UC San Diego.

Tell me about your solo exhibit

Do Not Destroy. What was

your whole process for executing this creative vision?

The FBI files I requested through the Freedom Of Information Act. My father had many experiences while working with the Black Panthers and Angela Davis and he knew of the FBI involvement, but he really wanted to have that validation just to find out as much information as we could. I knew that at some point it would make amazing source material for an artwork although I didn’t know exactly what that would be because the content is so weighted and loaded. I wasn’t really sure how I would approach it, but I really wanted the pages to speak for themselves so my intervention on them was necessarily minimal and I just used pink and black. With the spray paint, some people said it reminded them of bullet holes or blood or tagging and graffiti. I wanted to use the pink to bring in this character of me as daddy’s little girl looking at this characterization of my father, but through this lens of the FBI that was viewing him as an extremist and basically a terrorist for his community activism."

Touching on that, what is your relationship with your father like?

"I mean, my dad is a super cool guy. He definitely has been created in my art piece. My art has always referenced our family and the black American family and the larger context of using my family to have that conversation. My dad is a really creative person and he’s not an artist in the actual capacity, but I think it’s just the way his mind works. He has a lot of visions and creativity and ideas as I think a lot of activists do. You really have to be dreaming to imagine a better world and fight for it. I love talking with him about the work.

I’m sure that you must have felt inspired all the time. Your parents are kind of your heroes, but to have a parent that made active efforts to create change is incredible.

I definitely wanted to honor him and all the people who were organizing at that time. I want them to know that our generation so respects and reveres what they’ve done. We’re not doing things in exactly the same way now but I just really want those people to know that we think their efforts are amazing and that we still study it and are still trying to find an answer to it."

These are all important steps in preserving our history within this nation. How do you feel about modern day activism? You spoke about our generation and how our approaches are different and even though I feel like a lot has changed since the Civil Rights Movement, we’re still constantly fighting for many of the same issues...

"When you read the 10 Point Program of the Black Panthers, it definitely seems like it could be written today. Nothing is checked off the list. There’s a lot of things that make it very difficult to organize right now. I’m not gonna say that the world hasn't been changed because of the Civil Rights Movement and the Black Panthers but obviously we didn’t have the revolution that they were talking about. I think the fact that that didn’t happen sort of makes it difficult to imagine what could happen. I think crack cocaine being introduced to the community at the end of the Black Power Movement really, really, really made organizing difficult. I think the idea that getting a record deal or getting your parents a house or people taking care of themselves is sort of the idea of success. The idea of our whole community as one has been lost a lot.

"I don’t know what the answers are and that’s why I make art, because I feel like it can be about question. I really admire Black Lives Matter activists. I admire what people did at Standing Rock. I think the Occupy Movement really helped to create a language that everyday Americans are talking about,

and having this class analysis that I don’t think was popular vernacular. So I really commend the people who are organizing on the ground and I feel like what I can offer is being a researcher and a creator of culture and a creator of conversation through art.

What is one piece of advice that you would give to young black kids living in America today?