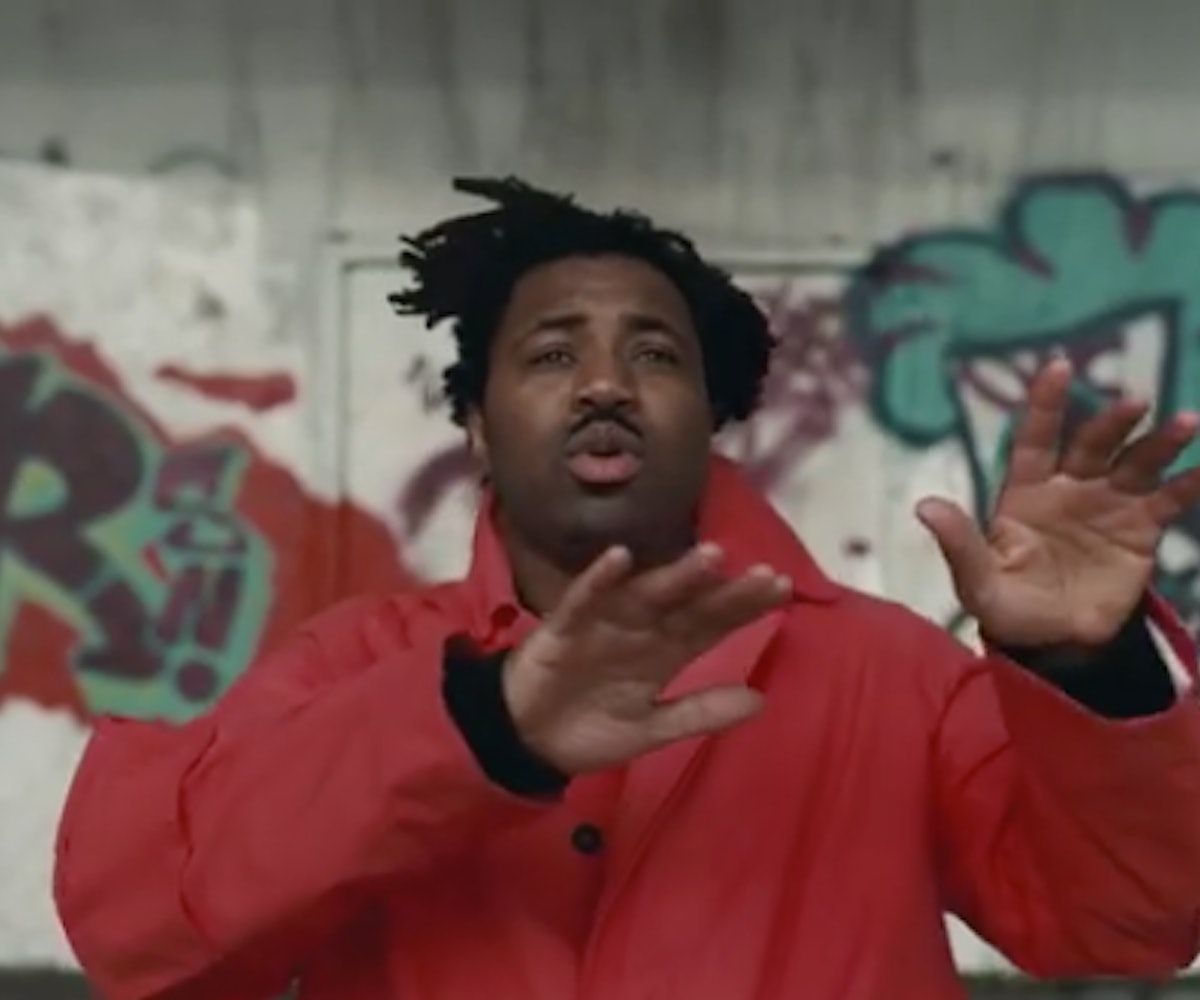 In the summer of 2011, Sampha joined his frequent collaborator SBTRKT during a performance at MoMA PS1. He wore a mask that hid half his face and lent his vocals to the DJ’s tracks. Ultimately, though, it was SBTRKT’s performance, not Sampha’s. This past Wednesday, though, Sampha returned to MoMA to premiere his accompanying short film, Process, and all eyes were firmly on him. This time, he was very much unmasked.

Process was directed by Kahlil Joseph, the man behind Beyoncé’s gorgeous Lemonade visuals. His creations are as cinematic as they are works of art, and his fantastical style is sprinkled throughout everything he touches. The 30-minute film opens up with a scene in Sierra Leone—Sampha’s parents’ home country—of a lady balancing a basket filled with fabric on her head. A bulk of the film continues in this manner—regular people going about their regular lives in the African country. Every now and then, we’ll get snippets of men and women dressed up in traditional African garb (the production cast consisted of more than 600 people) or glimpses of the sprawling green-covered countryside. At one point, the film focuses on a scene of people moving in sync while in an empty, abandoned pool. It’s one of the more jarring and visually stunning parts of the film, though, truth be told, there are many others.

About a quarter of a way through the film, Sampha can be seen in Morden, the London neighborhood where he grew up; these images are interspersed with aerial shots of Bureh Beach in Sierra Leone, in which Sampha can be seen playing the piano during a magnificent sunset. At one point, we hear from the singer’s grandmother, Fudia Turay, as she reflects on her childhood and the family she’s formed (during one of the conversations she utters, maybe the best line in the whole film, “I don’t want another man again, I’m done”).

“In a gesture of authenticity, many of the spaces and people filmed in London are directly tied to Sampha’s personal narrative,” a press release reads. “For example, the Morden bandstand filled with graffiti where Sampha sits in the freezing cold behind a small Rhodes piano is the actual stage in which a young teenage Sampha would sit years earlier and dream the very moment that was being filmed.”

The film is a juxtaposition of Sampha’s two worlds: the one he grew up in and the one he’s, perhaps, still getting to know. After his mother died in the fall of 2015, Sampha took a trip to her native land to bury her. In the final scene, Sampha plays us out on his piano during a performance at Sierra Leone’s global theater. A quote flashes on the screen before he starts to play. It reads: “I’m connected to you no matter where you are.” A voice in the background, one of Sampha’s brothers, explains that the song he’s about to sing, “No One Knows Me (Like The Piano),” is the last song he played for his mother at her funeral. Knowing this brings new, heartbreaking meaning to the lines: “You know I left, I flew the nest/ And you know I won’t be long/ And in my chest, you know me best/ And you know I’ll be back home.”

The singer has talked about his tendency to keep things to himself. He’s more reticent than most artists, with no particular desire for a bright spotlight of any kind. And Process didn’t reveal any more about Sampha that we didn’t know from hearing the album already—which was played throughout—but it did give us an intimate look at the people and places that have helped mold him. The film, really, might have been more for himself than anyone else. It was a breathtaking love letter to his homeland, his hometown, and the person he called home for so long: his mother.

You can watch the full film over at Apple Music. Though, if you have the chance, it really is a moment best experienced on a screen larger than your computer or smartphone. For those in London or New York, Apple Music is screening the film on storefronts and wallscape projections. If you can make it out, we highly recommend. Find out where and when you can attend the screenings, below.