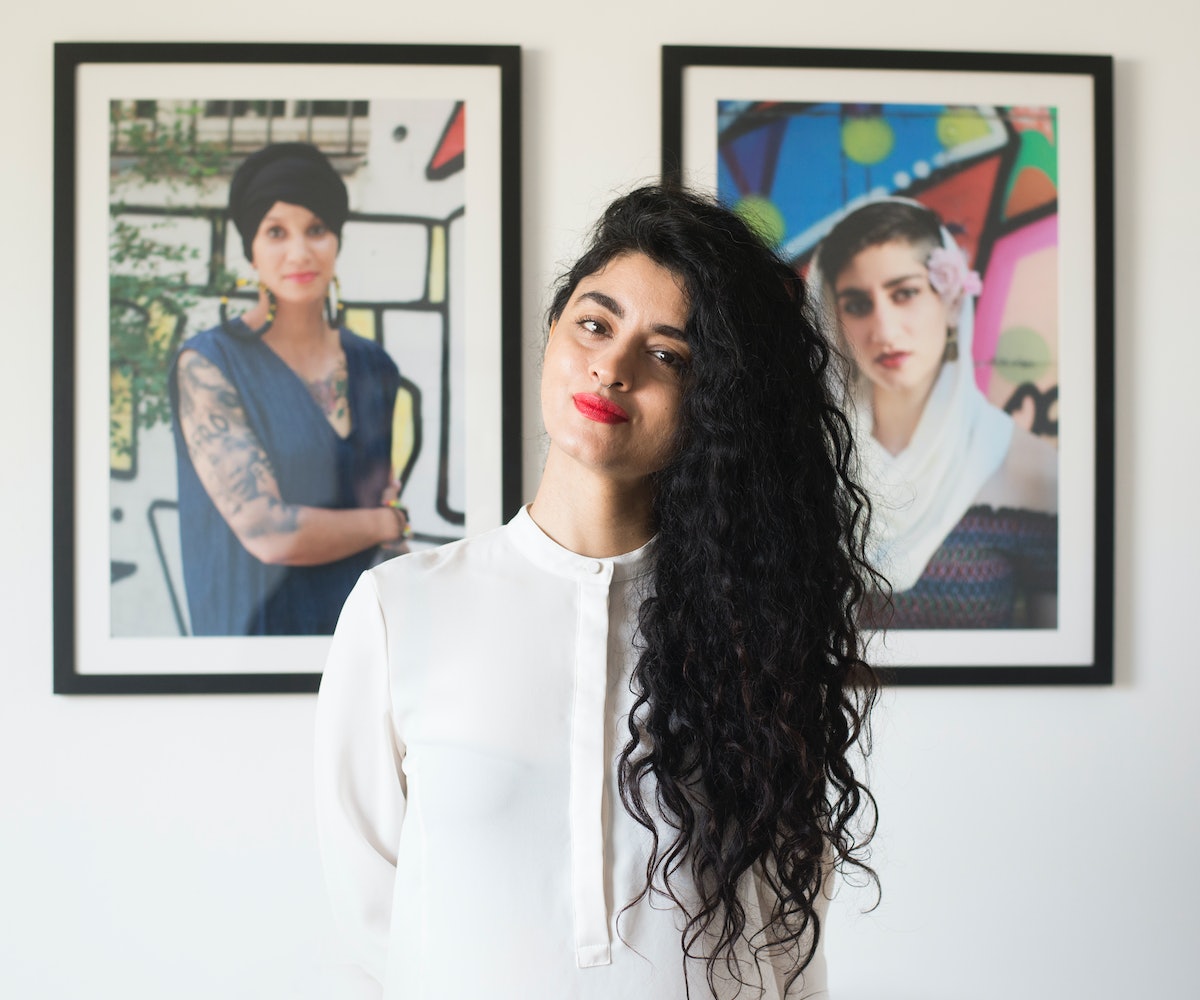 Growing up, Samra Habib felt like an outsider within her own religion of Islam. As a member of the Ahmadiyya Muslim Community, a small, dynamic sect of Islam founded in 1889, her family fled Pakistan because religious extremists made their life unsafe. Now, she says she's "always looking for stories on what it's like for other Muslims who are not accepted by mainstream Islam." Add on Habib's queer identity, and you've got a life lived at the complex intersection of a religion that doesn't necessarily welcome LGBTQI+ individuals and queerness. Talk about feeling like an outsider.

Habib is a writer, activist, and photographer. Her photo series, "Just Me and Allah: A Queer Muslim Project" started in 2014, finds Habib photographing and elevating the stories of other queer Muslims across North America and Europe. "What has come out of not being embraced by mainstream spaces is that a lot of people, a lot of queer individuals, are creating their own spaces," she says. One of those spaces is Unity Mosque, a queer mosque in Toronto that Habib attends and supports "Just Me and Allah." She's been going there for nearly five years after a decade of not going to any mosque because her relationship with Islam was "tainted" and she "felt like there wasn't really any space for [her] there." During her first visit, Habib recalls a transgender woman giving the adhan, the Islamic call to worship in an untraditionally desegregated space. It's through Unity Mosque that Habib says she "started learning what it was like to be accepted in [her] entirety."

We, humans, are complex and made of many identities that inform one another. We seek spaces for all of them to flourish simultaneously. Habib's experience in seeking Muslim spaces that accepted queer identities was just one hurdle to get over. Another was finding supportive spaces for queer Muslim identities to grow and thrive. "A lot of queer spaces in Toronto growing up," she says, "were mostly white, and I was usually the only person of color there. I didn't really necessarily identify with the white queer community in Toronto." The need to see herself in a community fuels her photo series and the subjects she highlights.

Photo of Leila by Samra Habib

"What I try to do is give people platforms to actually tell their own unique stories and share exactly what their relationship with Islam is and how they arrived at this destination," Habib says. "Each individual is given the space to showcase their individuality, which I think is often times lacking because queer Muslims are typically grouped in a really homogenized way." One portrait session that stands out to Habib is the one with Leila, a woman who challenges Habib's relationship to Islamic signifiers, like the hijab. "She creates her own interpretation of what being a modest Muslim can look like." Other individuals Habib has spoken with range from a black queer Muslim who considers his relationship with Islam to be "elusive" to a trans-Muslim woman finding her own peace within the Quran scripture. They all paint a picture of resilience and are a testament to the power of community.

"Not only has my perception [of being queer and Muslim] changed, time has changed things dramatically in terms of how queer Muslims experience Islam," she says. "There are lots of other people who are embracing Islam even though they're rejected by mainstream spaces, so I don't have to deny this huge part of my upbringing; I can make it my own."

Unity Mosque and "Just Me and Allah" are just a few ways queer Muslims are finding solace in community. It's up to those who identify differently to help make spaces more inclusive and supportive for all. Fighting for equal queer rights means fighting for equal Muslim rights. Empathy and perspective are key; "What queer Muslims experience as a queer people might be different from someone who is queer with a lot of privilege and a lot of acceptance," Habib says. Fostering spaces that accept and elevate queer Muslim voices are imperative to the queer rights movement. Visibility is vital. "I'm just learning that my community is no longer shaped by geography," Habib says. "As long as we have this thing that ties us together, I know we'll be okay."