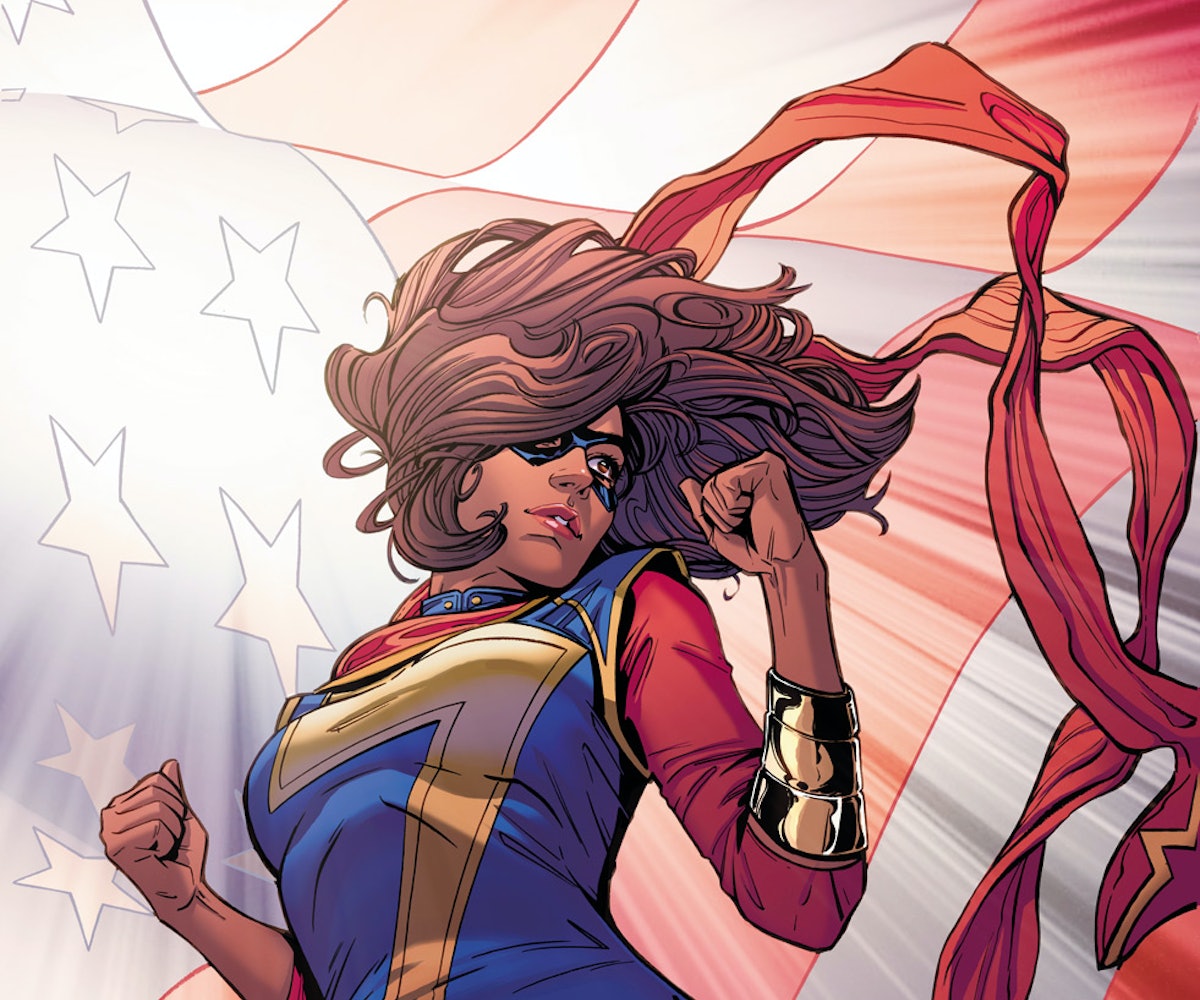 In the world of comics, pretty much anything is possible. Although some of the best-known superheroes have traditionally been white men, it seems as though the super world (and its readers) are craving a different kind of hero. Enter Ms. Marvel, known to her friends and family as Kamala Khan. In our eyes, this character, a Muslim-American teenager from Jersey City, is one of Marvel's greatest successes.

We sat down with Sana Amanat, director of content and character development at Marvel, who is also a co-creator of Ms. Marvel, to ask her about her career path, how a comic book character is created, and why we need a girl like Kamala Khan.

Tell me a little bit about your background and what led you to Marvel.

I was a political science major at Barnard College. I thought I was going to be a journalist, thought I was going to be a lawyer, a lot of different things. But, I knew really that I wanted to work in publishing and I eventually went into magazine publishing for a little while. Then, years later, after a lot of different stints at different things, I ended up working at Virgin Comics, a small, indie comics company. That’s actually where I got my start and where I learned what it takes to build a comic from the ground up. After that company went under, I actually contemplated going into a different field, but I got to Marvel a year later. It had some really wonderful people who encouraged my participation and my voice. I love comics; I love the stories behind them; I love the format itself. I started off as an assistant editor and I moved up through the ranks.

Was there any hesitation or resistance from the company about the creation of Ms. Marvel, who is not only a girl but also Muslim-American?

We had a slow build in terms of having more female-focused offerings and titles. When I started at Marvel, we had maybe one or two [female-focused titles], and they were canceled fairly quickly after I got here, and then we didn't have any for awhile. I think the return of a female lead character was Captain Marvel. I think she was really the first foray into much more obvious female-focused content. I have been working on Captain Marvel since its inception and when we started talking about the creation of Ms. Marvel that was much more about the next level, the next layer of relatability among presentation. Creating a character that was reflective of the way the world is and the experiences people are having today was incredibly important to us.

When we first pitched the idea I had been working on the story for awhile before it officially got green-lit. When I felt comfortable enough to get it to a phase that I thought was good to share with the creative heads, the first response I got was that this is a classic Marvel story. It's a Peter Parker story about a young, awkward teenager just trying to fit in amidst their family expectations, trying to do good, and being conflicted between being the superhero and being the civilian. For us, that extra layer is the fact that she happens to be Muslim and South Asian.

Do you think the comic book world is hard to penetrate in terms of inclusivity and introducing characters that are not white men?

I actually think that the reality is comic space has been [supportive of diversity] for a long, long time. For example, X-Men is a story about growing up and adolescence, and it's a story about race and civil rights. We also had really strong minority characters, like we had Luke Cage and Black Panther, and Storm and Dust. For some folks, the reason I think that they're hesitant is because we are, quote-unquote, really messing with their boys and taking and changing something that is very, very sacred to them. We are trying to tell people that the ideas and the ideals that these characters represent are inclusive, they are for everyone and anyone.

I didn’t have a huge interest in comics growing up, but when I see a character like Ms. Marvel, I relate to her. She's smart, she's cool, and those are qualities I admire, and it’s interesting to see how they activate throughout the stories.

I didn't necessarily grow up reading comic books either, but I did grow up loving the aspect of cartoons. I did grow up reading Archie comics and Calvin and Hobbes. What I realized was that our content wasn't speaking to certain groups, like women, in the way that they wanted to be spoken to. It's really just changing the rendering a little bit, so it's more appealing to women. Again like Ms. Marvel, it is very much a Peter Parker story, in a high school setting with all the different drama and relationships and what not. I think that's a bit more female friendly and that's why a lot of people have gravitated toward it. Obviously, there is a spin there in terms of her own identity struggles and figuring out who she is, but I think that's why it’s told through the lens of a Muslim-South Asian-American girl. It's definitely a universal struggle that people go through.

Do you find that your experience at Barnard, a women’s college, and living in New York has informed the way you approach your career?

I think my university upbringing was really influential. While [Barnard] has a very small campus, it gave me more of a world view. I was living in New York City when 9/11 happened, I was a sophomore in college. In a lot of ways, you know, it took Muslim-Americans backward quite a bit in the way that we were perceived, and in the way also that we saw ourselves. You do internalize that negative perception, and then you also just have a lot of issues with the fact that people are using your name in such a horrible way.

And obviously, Barnard being a women’s college, I think it gave me a really great foundation to look at women’s issues from a very educated perspective but not an exclusionary perspective because Columbia’s campus is right there. You know, I think the biggest thing is understanding that we have to talk to each other about ways to make women’s lives better, not just in this country but across the world. And what we’re trying to do here, most definitely, is trying to find ways to bring in people who don’t traditionally feel like they’re welcome. I would not say the comic industry is a boys club anymore. I think that kind of belongs to the past.

What is the process like of creating a new character?

The hardest thing to do is to create a new character with his or her own series. So, what we did specifically with Ms. Marvel was think about the original intention, creating a character who was reflective of this certain experience. First, you have to figure out who the main character is, what her vulnerabilities are, what her wants and desires are, and, of course, what her superhero powers will be. You have to find a fundamental message—Peter Parker’s was “with great power comes great responsibility," and we wanted to find what that was for Ms. Marvel. For us, it came down to her identity struggle. And once we figured out that, we started asking, “What does she look like?” We wanted to make sure she was cute and quirky and adorable. Illustrator Adrian Alphona was very excited and started sending sketches of her family, her civilian look, of Jersey City. He’s a such a fantastic world builder. And then from there, we dive into the outline of what we want the first origin story to look like.

So Ms. Marvel is a shape-shifter and has healing capabilities. Of all of the superpowers, how do you decide who gets what?

We all had some really bad ideas at first, but her being a polymorph seemed to make sense. There’s a really great message there when you think about a young girl, who doesn’t like the way she looks and doesn’t think she fits in, who can change to look like anything. And her not being herself was a big part of her own self-exploration. You know, in the first issue, she morphs into her idol [Carol Danvers], and that was a very specific choice we made because of her thinking that the ideal and the concept of strength and beauty and perfection is someone who is literally her opposite in terms of looks. So, that power set really was organic to her story. And, I wanted to make sure she didn’t have typical pretty powers with sparkly explosions and her hair blowing in the wind. Or even powers of flight. We wanted to make sure it was a little quirky; she’s a teenager. Her powers are a little awkward, and I think that’s kind of fun to play with.

What’s your favorite part about your job?

There are small things, like the excitement of working on a story and seeing the first designs of a character or a cover come in, or the first draft of the script. On the other end, now I’m involved in more of our larger strategies and our content strategies, and figuring out where there’s potential and how we can maximize exposure to characters and certain franchises. That’s exciting because I can see the actual effect; I can see the sort of our intention, and I can see how it affects the rest of the company and how it affects our audiences. I’m able to have some connection to our overall content development plans. So, that’s really gratifying because Marvel’s not a huge company. My very selfish intention is to try to find ways where we can create more content for girls and women across the board, not just in comics. I know we’re going to be able to get there, and I’m so excited to help make it happen.