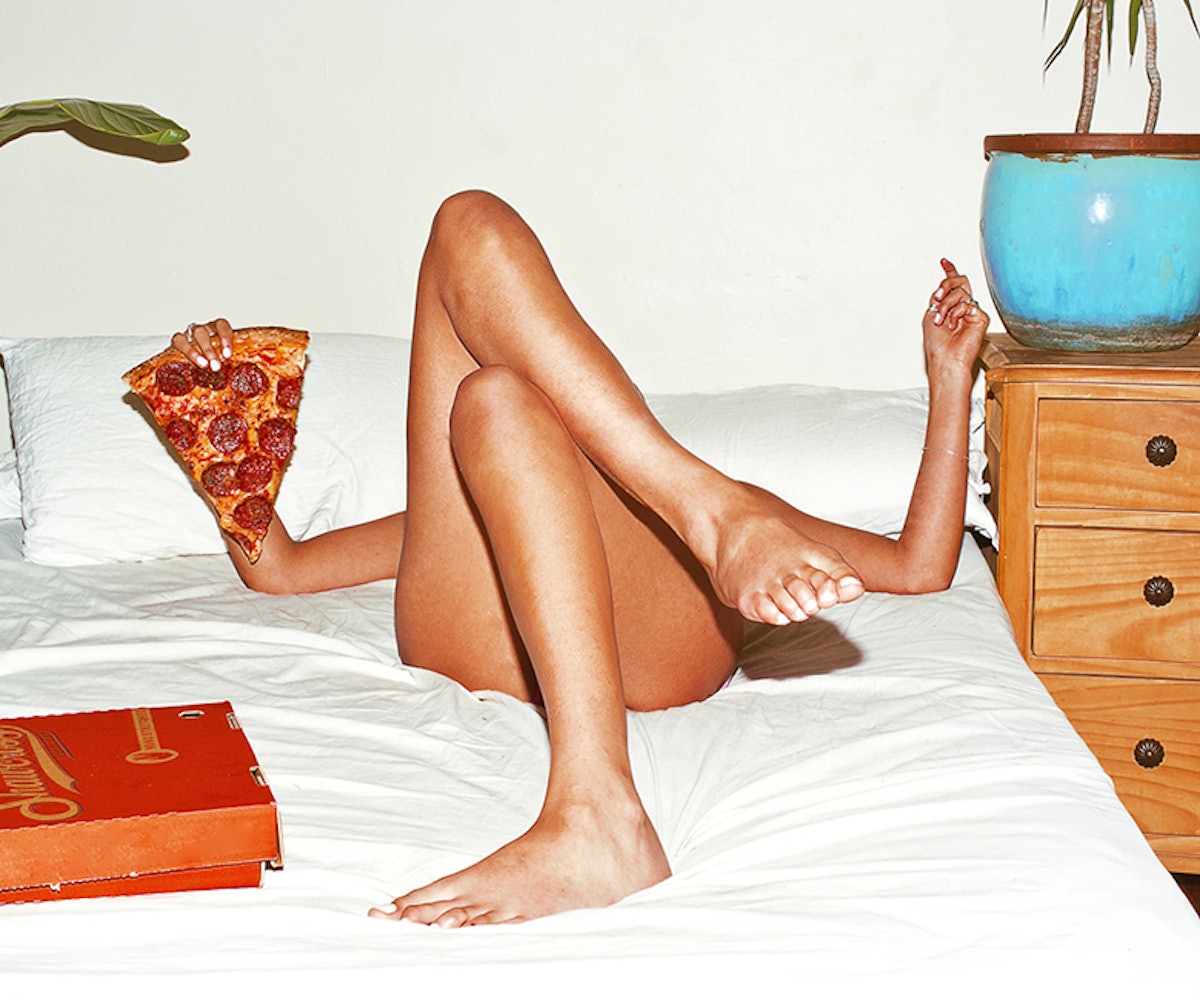 If you’re a frequent Instagram user, there’s a very high chance that you’ve accidentally stumbled across Sarah Bahbah’s work. The Melbourne-based artist, whose photographs take an intimate approach to women's internal monologue, have the effect of making you ask yourself, Did she just read my mind and make my thoughts into photos?

After recently wrapping up a collaboration with Dylan Sprouse and Valentine’s Day campaign for Gucci Guilty Pour Femme, Bahbah has her first solo exhibition in NYC this month. Titled “Fuck Me, Fuck You,” the exhibit shows the almost callous, destructive current running through her art. She explores very relatable themes, like sex, self-indulgence, friendships, and modern romance, but in such a way that hints at what exists beneath the surface: the vulnerability and loneliness that comes with love and heartbreak.

In an attempt to keep her work as relatable as possible, Bahbah maintains a level of transparency with her viewers, making anyone who’s ever fallen in and out of love feel truly understood. Recently, we caught up with the artist to talk about her latest projects and the exhibition, which will be on view until March 25.

Your “Summer Without A Pool” series seems to concentrate on teenage female friendships, but in your later photo series, this element is lost. Is this done to emphasize and heighten the feeling of loneliness that your later female protagonists tend to experience?

Yes. With "Summer Without A Pool," I created that series while I was still living in Melbourne and had a really strong support network with female friends. My art is a reflection of my experiences, so, at the time, I had a family in Melbourne and girls that I could go to get me out of my ruts and what not. "For Arabella" and "This is Not For You" is a depiction of my reality. I guess the dialogue got stronger and it got darker because I am overwhelmed with loneliness a lot of the time.

Do you think that lonely feeling is attributed to the fact that L.A. is such a large city and there can be a lack of genuine friendships in places like that?

Now I have a strong community in L.A. of friends who I depend on with my life, but I think, for me, moving away from what was my home to a new city, I ended up hitting quite a low point halfway through my first year. I was just making really bad decisions for my mental and physical health. I really felt isolated for the first time in my life. I lost connection with everyone, so even though I have these people that I love and I'd do anything for, when you're exposed to an experience and a memory that's been with you this whole time and you've been oblivious to it, the disassociation that comes with that... it leaks out into your other relationships—the whole being is disconnected. I think, essentially, it's a disconnect, and I think that's why the dialogue got darker.

“This is Not for You Part II” differs from your other photo series because it explores the cycle of heartbreak through the male lens by showing that men can be just as vulnerable as women. What inspired you to branch out and channel this perspective?

I came up with this quote, actually. I think I was just getting really pissed off by pseudo-feminists and a lot of the male-hating. I don't like when girls or women use men as a target for everything that’s wrong. My quote was, "Feminism is about making women stronger and allowing men to be vulnerable." I wanted to able to express my thoughts that men can be vulnerable, too, and they should be. My dad, for instance, I've only ever seen him cry once, but I’ve felt his grief and his struggles my entire life just though his silence, and that hurts me more than seeing him cry. If my dad was able to communicate the things that he was going through, because he was he was allowed to be weak, he would have lived a better life—a happier life. For me, it's just so important to have the men in your life be able to lower their walls, too, and to not feel like they always have to protect. That's why I chose to shoot with Dylan [Sprouse]. Because I think that message needed to be articulated.

How did you two find each other?

So he actually DM'd me on Instagram! He was just like, "Hey, I don't know if you'd be into it, but if you ever wanna shoot, I'm so down." And it just so happened that I was in New York two days later. We met up at a bar. I had a drink, and he had a drink, and then we just couldn't stop talking. I was like, "Cool, let's work together." The next day we shot together and, after that, we ended up spending all of Fashion Week hanging out. He's become a brother to me, I adore him so much. He's a real special guy. He's super real, and I respect that so much.

At the time, Dylan was going through a breakup. Was this an influence for the project?

We didn't really discuss too much of his personal life in that respect that much when we were shooting it. The words came from me, and something I was going through. If that had happened to synchronize with his experiences, then it was coincidental.

The highs and lows of love seem more bearable to your protagonists with a companion by their side. Is this why your later protagonists seem more angsty or angrier when they’re experiencing life and love on their own?

I think it comes back to the stories being a true reflection of my dialogue. All the words that you do see come straight from me being transparent with my emotions, so "For Arabella" came to me when I had just moved to a house by myself. I got out of a situation, and it was probably the most integral month for me when I created that series. I actively decided to get better, and I was doing it alone. I did have friends who were by my side, but this was something I needed to deal with on my own, so you do see that she is a lot angrier.

What was it like working with Alessandro Michele for the Gucci Guilty Absolute Pour Femme campaign?

Working for the Gucci team was great. They were very respectful of me as an artist, and the feedback constantly was, "What does Sarah think? What does she like? We want to hear from Sarah." So they really made me feel valued as an artist, and I really respect them for that.

Gucci Guilty is the first time that you decided to incorporate an element of technology in your photography. Why did you decide to do that for this series?

The concept that we were all working on was modern love. In the [summoned by digital love], that concept came from long-distance relationships, and we wanted to be able to use the tools, which is the laptop and the FaceTime calls. They give these relationships a longer life, essentially. I feel like it was integral in spreading the message. But I actually was hesitant, at first. My original idea was to have a hand coming out of the laptop as if he was grabbing her, like a real surreal element, which I had never before. But then we just decided to remove the hand because the laptop was strong in itself.

What can we expect from your photography in the future?

I'm just really challenging myself to be more transparent with what's going on inside. I would definitely anticipate deeper messages and messaging that isn't really explored in society right now. I know we have the Time's Up and the Me Too movement, but there are things that aren't being addressed that are equally important. I feel like it’s an obligation to speak up about other issues that aren't being addressed in society right now.