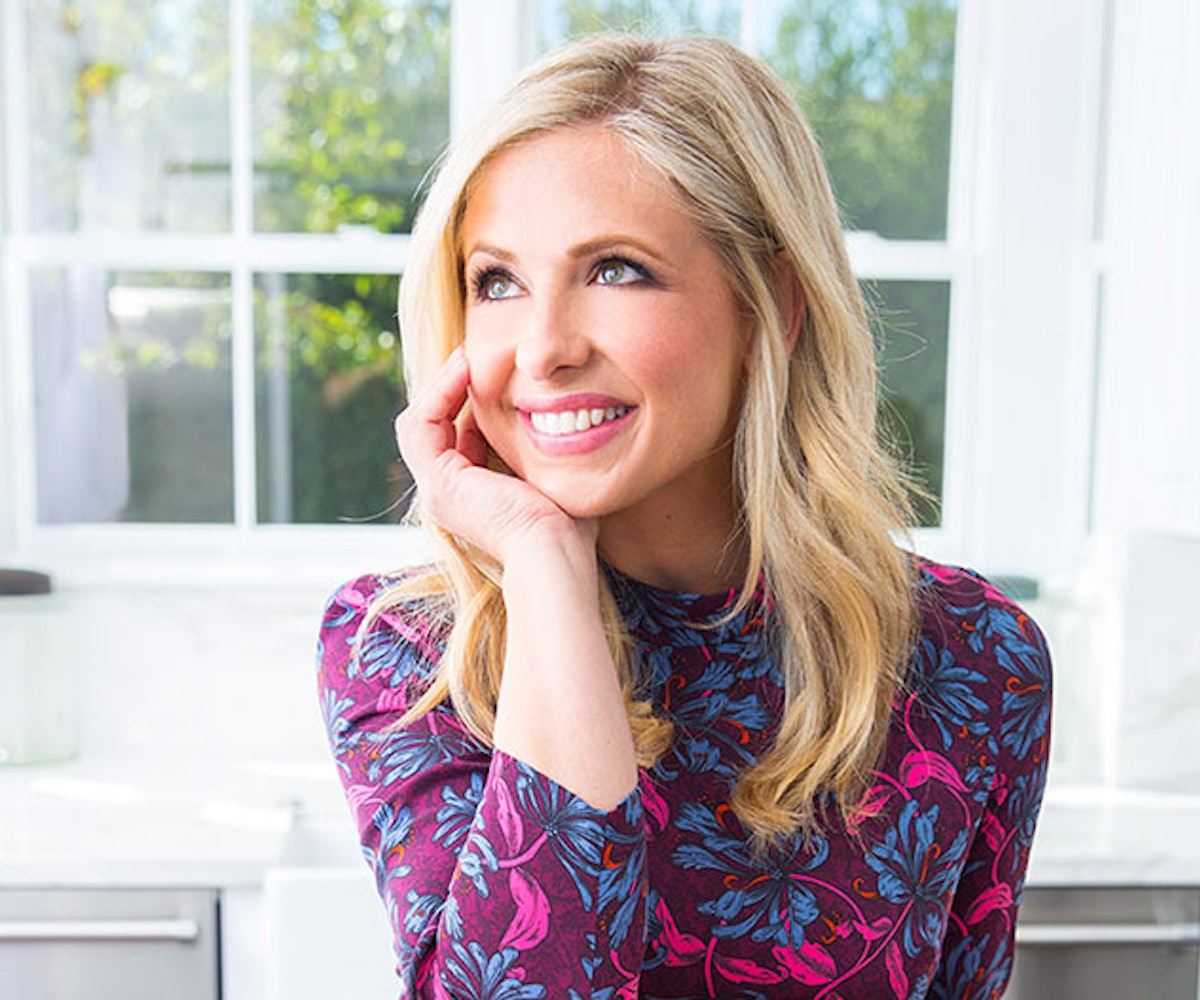 If you've ever dreamed of experiencing that food-coma ecstasy Sarah Michelle Gellar put her Simply Irresistible costars in, now's the time. After the "tragic and abrupt" ending of CBS' The Crazy Ones, Gellar has set her sights on connecting with people in a whole new way, outside of acting: food.

So, she started Foodstirs. After seeing the laundry list of not-good-for-you, genetically modified ingredients on the snacks her kids were enjoying, she and her two BFFs, Gia Russo and Galit Laibow, saw the opportunity to create something less artificial, more user-friendly, and, well, downright meaningful. “The kitchen can be an extremely intimidating place," Gellar told us. "Everyone wants to bake, but says it’s too hard; there's too many ingredients and too many directions. I wanted to fill the gap between inspiration and execution.” Two years and a slew of family friendly, affordable recipes later, Foodstirs became a bonafide experience. “Foodstirs tries to make it easy and take the stress out."

Ahead, Gellar chats her favorite recipes, traditions, and how to not lose your chill this holiday season.

How do you keep your cool during the holiday season?

We put too much pressure on ourselves during the holidays. It’s time to enjoy! It’s not about the number of gifts you get out. It’s about what you have, and what you have is measured in memories. My mom and mother-in-law always feel the pressure with what to get the kids. I say, you can get them a great toy, but in two or three months, they won’t remember it anymore. But if we make a cake together, it’s more of a fun time with loved ones. That’s what they remember.

How do you get everyone into the kitchen?

One of the things we tried to do with Foodstirs is keep all projects under six steps. I’m lucky my daughter loves brussel sprouts, but there’s only so many vegetables to get kids—even adults—excited about in the kitchen. (I recommend the smell of cookies to get people into the kitchen.) Everything in moderation! I don't believe in not allowing. It’s about quality, how it’s made and portions.

What will not be on the holiday table anytime soon?

My signature dish was a green bean casserole, but my husband has banned me from making it. It’s a twist on the traditional green bean casserole. He said it was gross. I made it from scratch! Banned. [Editors note: For fairness, Prinze Jr. went to culinary school and has his own cookbook out next year!] We try to eat a little better than a green bean casserole, though. My daughter is making a spaghetti squash; that’s her contribution. We even went to the Farmer’s Market to pick it out. What's one tradition with staying power and nostalgia? I grew up in New York, with the Macy’s Thanksgiving Day Parade, and I’d watch the balloons as they’d go by every year. My daughter loves the "ladies who kick," a.k.a. The Rockettes. My son loves all the balloons. It’s a tradition with my mom, and the kids watch it on the TV. And I always host Thanksgiving at our house.

Cupcake Cones! My mom used to make them for me. Not the exact ones, of course, but the idea of it. It’s cold across most of the country towards the end of the year. You can’t have ice cream, but the cupcake cone is such a nice reminder of the warmer times.

Well, we made brownies with coconut oil and [my daughter] said, "I wanna make coconut brownies." She measured it out and did it all on her own!

What are you thankful for this year?

Blood sweat and tears. [Foodstirs] has been a true passion project. I love every time I get a letter or an Instagram and see people's faces. A woman, a couple of weeks ago, wrote in and said her 16-year-old son and her stayed-in. He had cancelled plans to make Foodstirs with her. She couldn't remember the last time he spent time with her on a Sunday night. It made what I do all the more meaningful.

What's one go-to holiday recipe we should we make for the next big get-together?