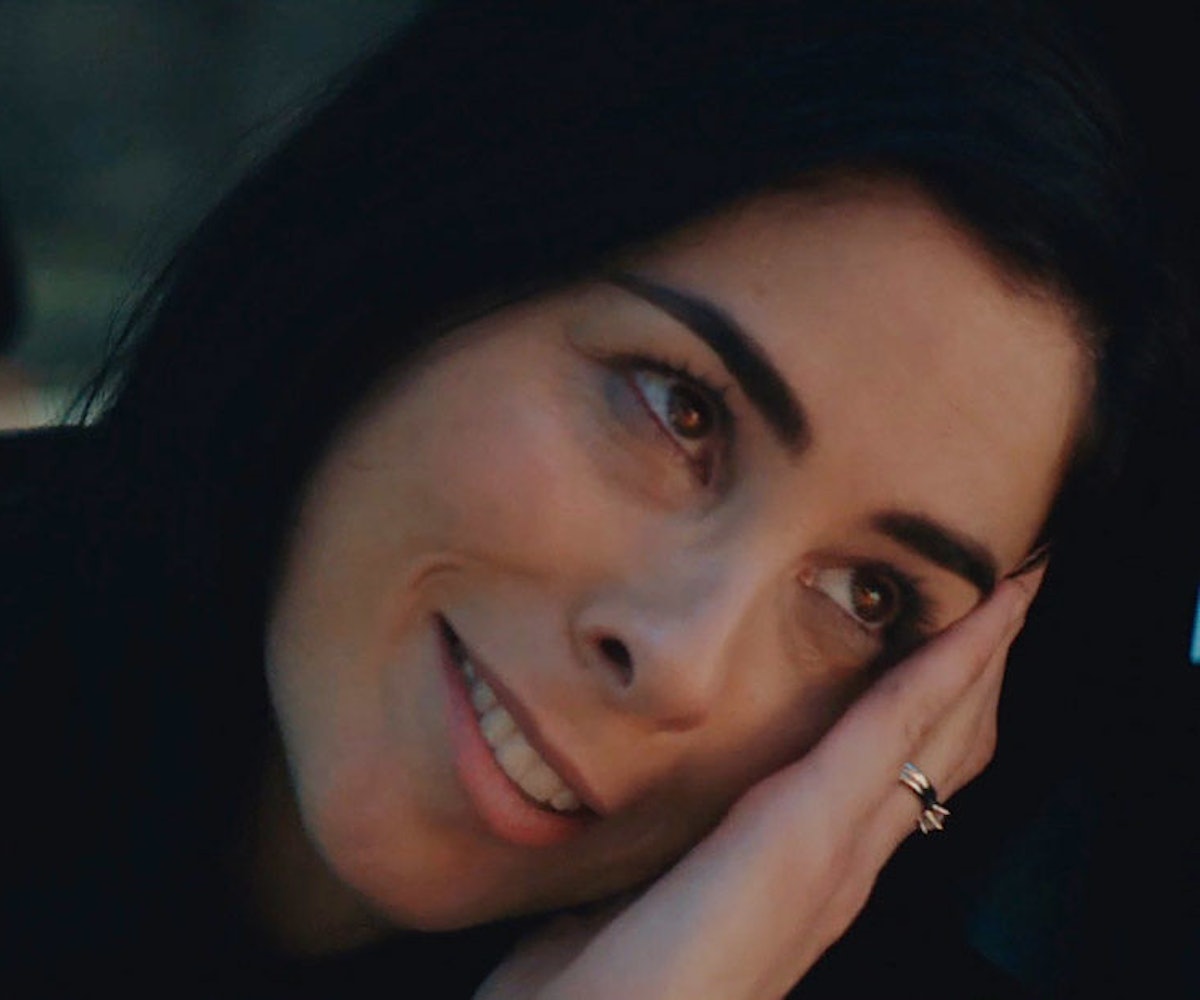 Author Amy Koppelman was driving down the Westside Highway one afternoon, when she tuned in to The Howard Stern Show, and heard a revelation. She was accustomed to hearing the familiar squeaky voice on the other end tell squirm-inducing jokes, like that one about that time she saw her father’s penis but it was cool because she was "sooo drunk." But on that day, Sarah Silverman was on Stern’s chaise longue discussing her longtime battle with depression. Koppelman was struck by Silverman’s candor, and just like that she had found her Laney, the tormented housewife at the center of the new movie I Smile Back.

Based on the eponymous novel Koppelman penned in 2008, I Smile Back is an unflinching look at a woman coming undone. On the outside, Laney has it all: the strapping husband (Josh Charles), two shiny kids, and a house that could have been painted by Norman Rockwell himself. But on the inside, she’s drowning, and her addictions to sex, drugs and booze are the only thngs keeping her afloat. It’s a bold new step for Silverman, who when she wasn’t becoming one of the biggest stand-up acts on the planet, made a career out of playing the quirky best friend.

“It wasn’t like I was looking to be in some bleak drama,” Sarah told us when we met her in Toronto last month. “I’m never looking. I keep my overhead very low. That way I don’t have to do any planning or conniving.” Silverman has earned raves for her dramatic debut and seems nonplussed with all the incoming awards chatter. “I was just excited that somebody could imagine me in a way they haven’t already seen me. That’s very rare.”

What was the biggest lesson you learned after taking on your first overtly dramatic role?

I found myself saying things that I’ve always heard actors say that I would normally scoff at or roll my eyes at. Going into it I thought ‘Yeah, between action and cut it will be sad but we’ll still have a good time and joke around!’ But it wasn’t like that, because you do carry it around, you can’t just turn it on or off. Some people can, but I can.

Was it hard to relate to other people on set?

I’m so ashamed. It became a running joke that at some point in the day I would lose my shit over something so small, and then I’d be totally embarrassed and go on an apology tour the rest of the day. I was like ‘Who is this monster inside me?’ I guess I realized when you’re not in the middle of the scene you don’t know where to put all those feelings.

What was your experience with addiction prior to making this film?

Depression is something I understand and I’ve been on all sides of it, but with addiction I’m lucky in that I can take a puff of pot before bed, I can have one cigarette and not have one for days. I don’t drink, and I cannot be around drunk people. The thing about addiction is that as a comedian I’m surrounded by it.

You’ve watched it consume people that were close to you?

Yes. We’re comedians, we drop like flies, and that’s due to addiction and depression. They go hand in hand. I didn’t have a personal well to pull from, but I had a lot of angles on it, and I just talked to my friends who have been through addiction and the detox of it, because that was a scene I had to do. I was so scared to be trite because I only knew detox from movies and television so I didn’t want to draw from that.

Do you think Laney’s story is all the more startling because it happens in the suburbs?

I think this kind of thing is so common in the suburbs. You watch any of those Real Housewives shows and they’re all alcoholics and pill heads, to a disturbing degree. I think it’s a very unsung epidemic. But I’m also interested in it because people are going to walk away from it with very different experiences. They’re going to have empathy for her, they’re going to have sympathy for her or they're going to  like her.

Did u go into this role from a point of compassion?

No. I wanted to go in as objectively as possible, and kind of as clinical as possible, because you want the audience takes away from it to be completely informed by their own experience, and their own history. So there are going to be people that hate her guts and say white people problems, first world problems, fuck you, and there’ll be people who have compassion and everything in between.

The notion of someone always putting on a happy facade to please other people is strong here. Have you been guilty of that in terms of your own experience in Hollywood?

Not in a kiss-assy way, because as a comic I have an aversion to that. But I do have an impulse to want to make people feel good about themselves. One thing I realized is Laney doesn’t know she’s in a bleak drama. In real life there isn’t music informing what you’re going to feel, and things aren’t in slow motion to let you know that this is an indelible moment in life.

Now that you’re toplining a movie for the first time, do you ever think back to your early days in show business? Do you remember what it was like auditioning for Seinfeld?

Yes, totally. It was one of the first times I auditioned for something. It was in front of Jerry and Larry. I got home and got a call that I got it and that was maybe one of the most exciting moments of my whole life,. I very rarely auditioned for things and then got it.

Do you see yourself as a comedian first and an actress second, or are the two interchangeable?

I’m so lucky. When I see that I have friends that are actors and they’re not comedians, I thank god that I have this one thing in my life that I can control. As long as I get the stage time and I write, and I keep going, I can support myself doing something I love, and I don’t take that for granted. With acting you’re completely dependent on the whims of others. It’s nice that I have a power in my life., which is maybe why I didn’t have to get an eating disorder to deal with the powerlessness of acting.

How did you manage to become secure with yourself in an industry that is so judgmental?

It’s something I learned over a very long time. It came from a lot of therapy and a lot of life. But I’ve also learned that life is very long, unless its short. I also don’t have the normal stresses of fancy Hollywood people. I own my apartment, and I love it. I love watching my TV, I love hanging out with my dog and taking baths. I’m not into fancy things. I have a backpack, I don’t understand purses and jewelry, it’s just never been a joy for me. I own my car and that’s very empowering because I don’t have to take jobs or do things that I don’t want to do. I have everything I need for the rest of my life.