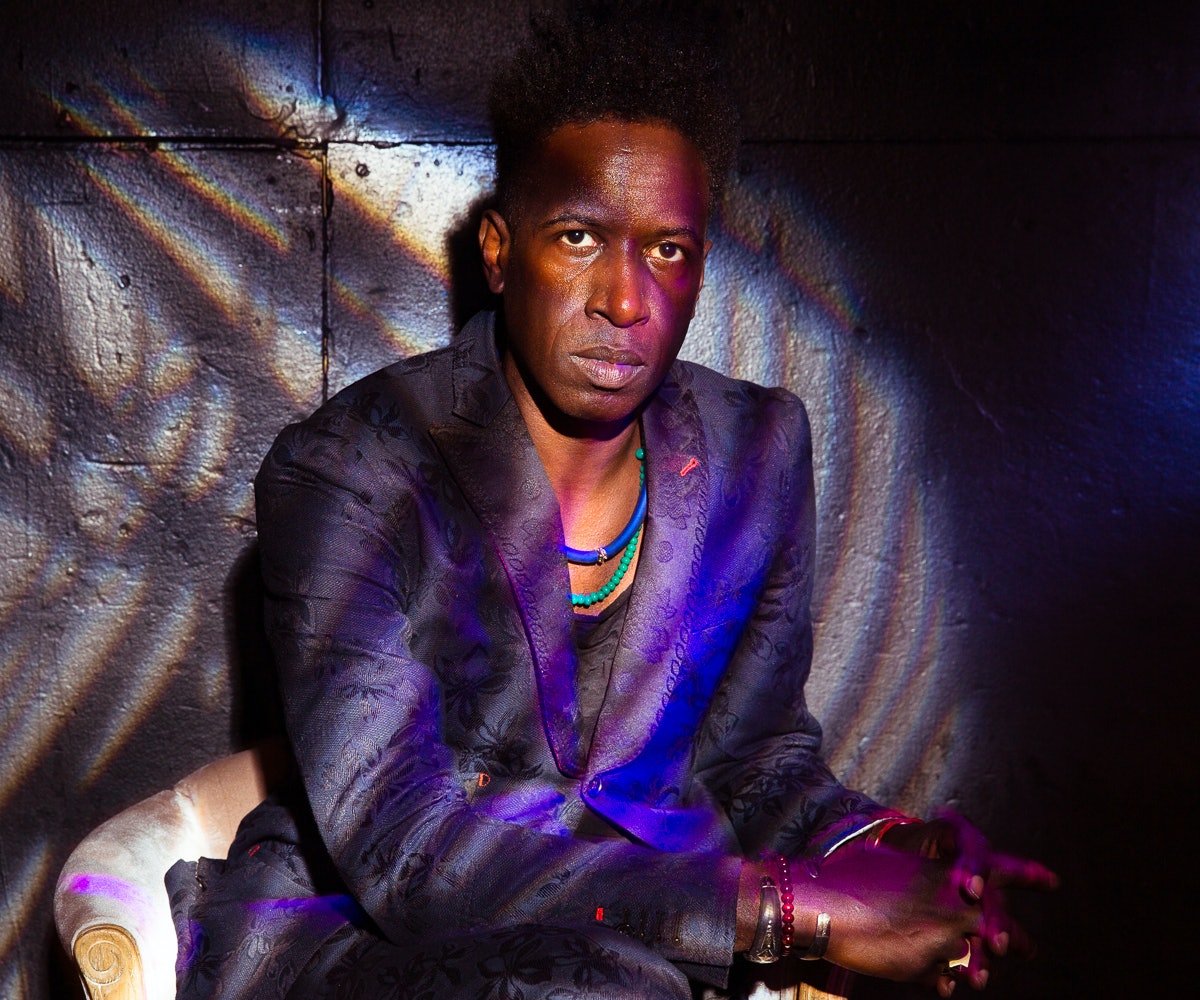 Raw, radical, and revolutionary, Saul Williams has never been afraid to weave uncompromising politics into his lyrics, but with his fifth record, he’s making attack music for the Edward Snowden generation. Reading like a cross between The Matrix and the Third World Liberation Movement, MartyrLoserKing is a concept album that speaks directly to a world ravaged by international strife and internal conflict, police brutality and protest, racism and its violent results. “Question your authority/genocide and poverty,” he growls on lead single "Burundi," while his proclamation that race is performative on "All Coltrane Solos At Once" proves that this record is more than a statement: it’s a post-Ferguson manifesto. We caught up with Williams to discuss the impetus behind the album, his collaborations with some unexpected rising artists, and bringing progressive politics to Broadway.

You’ve used the image of the raised middle finger in your single artworks and album trailer. Is MartyrLoserKing a middle finger to the world?

No, it’s a fuck you to the global powers that impose themselves on the world. It’s a fuck you to every hypocritical, puritan, austere ideological extremist that stands in the way of human progress. I believe that teens are always angsty and rebellious but that angst and rebellion needs to sometimes be pointed in a direction. You see in hip-hop that the rebellion has circled around. It’s about the precious car and the precious girl and that isn’t rebellion: that’s the status quo. For MartyrLoserKing that middle finger should be seen as a pointing finger, pointing rebellion and that anarchist spirit in the right direction. It’s a middle finger to every bank, government, and religious institution that stands in the way of human progress and has waged war on the inalienable rights of global citizens who deserve democracy and who deserve to overcome whatever issue they’re facing, whether it’s wage discrepancyor the exploitation of the Third World for the comfort of the First.

You evoke images of protest visually in the trailer and lyrically in "All Coltrane Solos At Once." Were you responding to the recent protest movements in the States?

It is a response to the recent protests in America but as well as a response to the protests going on in Burundi today, since their Congress determined that their president can run for a fucking third term. The images in the trailer come from Hong Kong, they come from all over, so part of MartyrLoserKing is about theorizing the connection between all these protests. We’re drawing connections between martyrs and whistleblowers. The whistleblowers set out to effect change by releasing documents or what have you—people like Chelsea Manning or Edward Snowden or Julian Assange. The stuff that they’ve released inspires citizens in various countries to come to the streets and demand change. The martyrs, the Michael Browns and the Freddie Grays and the Trayvon Martins, through death, have also inspired people to come out in the streets and demand that same change. It’s a big step for Americans to realize that their fight against these powers is shared throughout the world, but MartyrLoserKing is not American—it’s the screenname of a hacker who lives in Burundi.

As a musician, how do you relate to hacking culture?

First, as a regular person, I get a lot of albums for free. I was living in Paris for four years and there was a lot of shit I couldn’t get without hacking into something in order to be able to check it out. I’ve had interactions with people who’ve been savvy enough to get information that I wanted through hacking, and I’m guilty as anybody else when it comes to wanting to see films that I don’t want to give any fucking money to. As a musician, there’s tons of shit. I’m really into archival sounds, and so the way I’ve had to gather those sounds has been helped by technology and finding out where to find files. It’s not always illegal but sometimes it’s hard to find. In terms of hacking in the bigger picture, it’s clear that the virtual world is very much like the New World. We’re in the position of Columbus and all these old-time past explorers in that there’s a lot of freedom to be had and space to be explored. The surface web that most of us use is as limited as the percentage of our brain that most of us use. There’s a lot of information out there and I think that hackers in general have done some fucking amazing things in modern times.

You’ve been touring with younger artists like Emily Kokal of Warpaint. Did the Saul Williams brand need an injection of fresh blood?

I don’t think of them as younger artists, I think of them as artists that I like. I like Warpaint, so when the opportunity came to meet Emily, we hung out a bit and I played some of the music I was working on. She actually asked me if she could feature on three or four tracks. I’ve also been working with Haleek Maul. He’s eighteen but we can communicate on a level where we don’t have to use words. The same thing happened when I worked with Trent [Reznor], where we understand so much where the other was coming from that we just played and the other would respond. A lot of musicians I love surrounded themselves with younger musicians to harvest new sounds. I always want to sound fresh and current, and I feel more connected to what these guys are doing than to people from my generation.

Your last notable project was the Tupac musical Holla If Ya Hear Me, which closed prematurely. Do you think it was too radical for Broadway?

Holla If Ya Hear Me took place in Middle America where a random teenager is going through it in the community because of violence and the police. A week after we ended, Michael Brown was shot. They told us the thing was too political for Broadway and all that shit. We were competing with Rocky the Musical and Cinderella, and they ended the fucking play because they couldn’t get people on vacation to see it. The play was amazing and it becomes more and more relevant every fucking day.