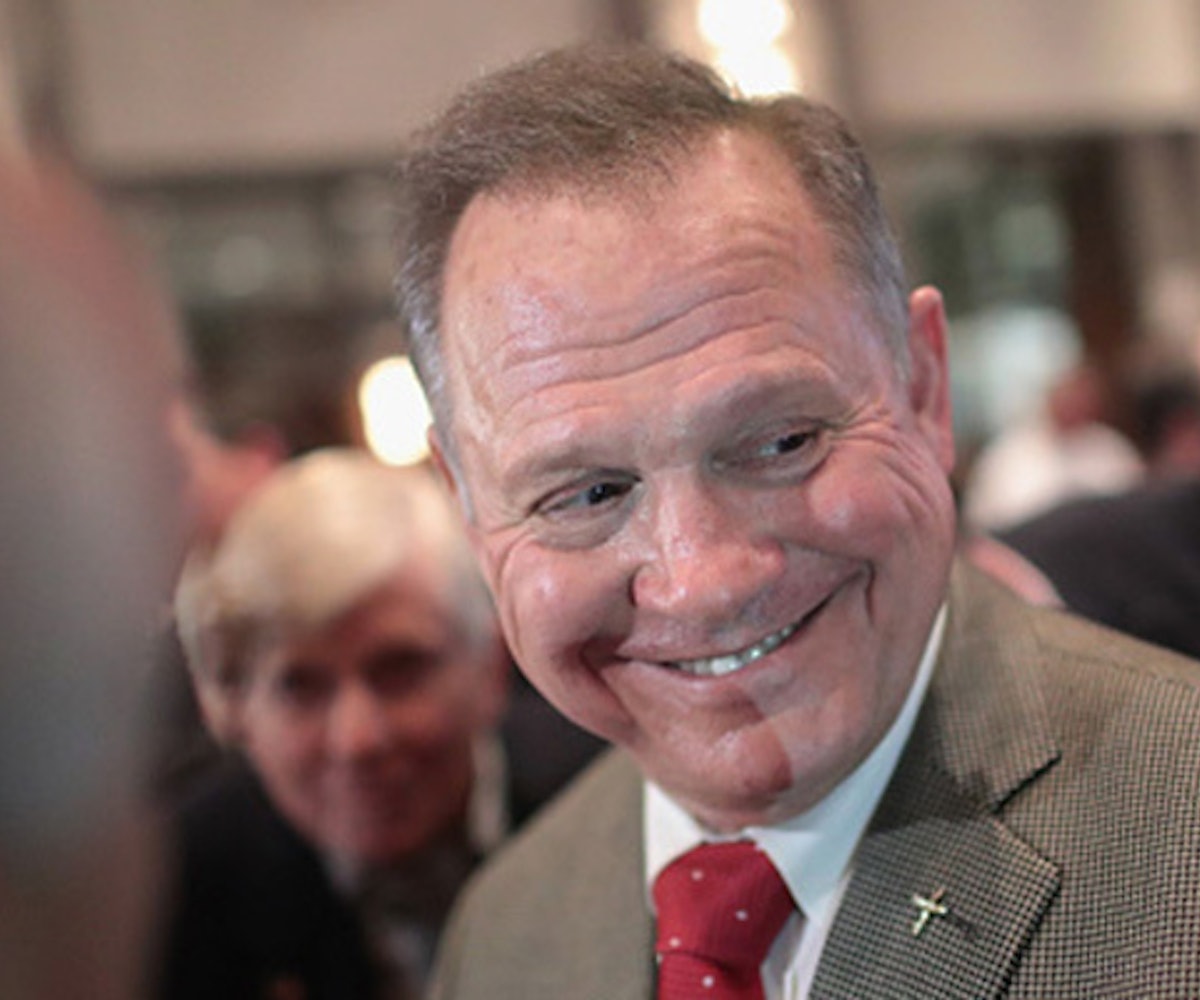 Roy Moore, the Republican nominee in Alabama for U.S. Senate, was recently accused of sexually assaulting a 14-year-old girl when he was 32. What should be a cut-and-dried issue—pedophilia is wrong, and Moore shouldn't become a senator—is somehow morally ambiguous to a lot of members of the GOP. Apparently, child molestation isn't that big of a deal when it involves your Senate nominee, and plus, it happens in the Bible.

State Auditor of Alabama Jim Zeigler seemed to imply that Moore assaulting the 14-year-old girl, Leigh Corfman, could result in the next messiah. "Mary was a teenager and Joseph was an adult carpenter," he told the Washington Examiner. "They became parents of Jesus." He added that Moore "never had sexual intercourse with any of the girls."

In addition to Corfman, three other women came forward with stories of Moore initiating sexual relationships with them when they were between the ages of 16 and 18, and he was in his 30s.

Fox News host Sean Hannity said the sex between Corfman—who said during the incident that she "wanted out"—and Moore was "consensual," and dismissed the women's allegations as potentially false. "They're saying one encounter with a 14-year-old," he added, casually, as if just once is somehow okay. He later apologized for his comments.

"It was 40 years ago," Alabama Marion County GOP chair David Hall told Toronto Star reporter Daniel Dale. "I really don't see the relevance of it. He was 32. She was supposedly 14. She's not saying that anything happened other than they kissed." When reminded that Corfman accused Moore of trying to get her to touch his genitals, Hall said, "It wouldn't affect whether or not I'd vote for him."

Alabama Bibb County Republican chairman Jerry Pow told Dale that, even if Moore did assault Corfman, he'd still vote for him, "because I wouldn't want to vote for [Democrat] Doug [Jones]." He added, "I'm not saying I support what he did." Covington County GOP Chairman William Blocker agreed. He'd vote for Moore even in the face of "hard evidence" that he assaulted a minor. "There is NO option to support  Doug Jones, the Democratic nominee," he said. "When you do that, you are supporting the entire Democrat party."

The Republicans that aren't blindly defending Moore's criminal behavior are simply calling the allegations "bunk," and pretending they don't exist. Meanwhile, former National Security Advisor Michael Flynn shared completely fabricated stories about Hillary Clinton orchestrating a pedophile ring in the basement of a pizza place, and that seemed credible enough for GOP's base.

While a lot of Republicans seem very cool with pedophilia as long as it helps them gain control of the Senate, some have said they're disturbed by their party's reaction to the allegations against Moore. Mitt Romney says he believes Corfman's story, and that Moore is "unfit for office and should step aside." John McCain asked for the same thing, calling the allegations "deeply disturbing."

Republican Arizona Senator Jeff Flake tweeted, "Come on, Republicans. Is this who we are? This cannot be who we are."

Only, it kind of is who they are. After all, they worked to elect Donald Trump as president of the United States, a man who has been accused of sexual assault by more than 15 women. And the White House's official stance is that all of those women are lying. This is an opportunity for the GOP to actually do the right thing and put a sexual predator in jail, not in office.

NEXT UP
Entertainment
Getting Ready With Pale Waves For Their 2022 New York City Concert
Entertainment
FLO's "Not My Job" Continues Their Streak Of '90s R&B Excellence
Life
NYLON Newsletter: September 30, 2022
Beauty
September 2022’s Best Beauty Launches Will Keep You Cozy And Cute Throughout The Fall