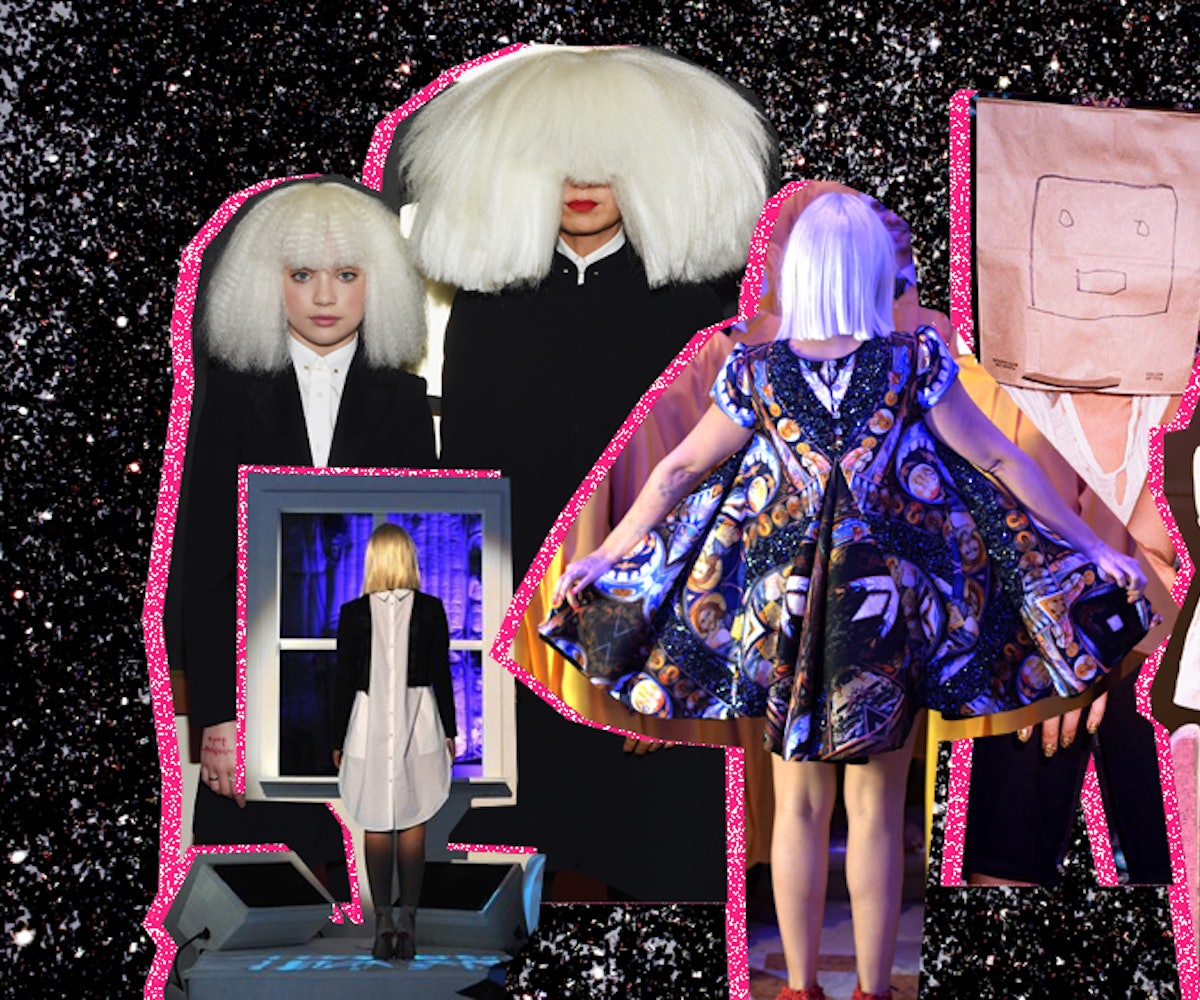 2014 was the year that Sia, who had long been a songwriter for some of the biggest names in pop music, became a star in her own right. But her fear of fame—which ironically made her more famous—meant that she did not appear in her own videos. Instead, she gave the spotlight to a young dancer named Maddie Ziegler in the video for "Chandelier," which at almost 525 million views has become an internet sensation.

That kicked off a series of live performances (and another video) in which an array of performers—from famous people to professional dancers—donned Sia's iconic blonde hairdo and performed a kind of childlike interpretive dance (usually choreographed by Ryan Heffington) that is both mesmerizing and hard to pin down. We honestly can't get enough of it. Here then, is our ranking of all the performers who've dared to rep Sia onstage. And no matter where they place on this list, we consider them all platinum blonde-haired winners.

8. The disembodied heads of various children on Ellen

Compared to most of Sia's doppelgängers, these kids had it fairly easy. Instead of dancing, they get to stand around in boxes and mouth the lyrics to "Elastic Heart" while Sia and Maddie Ziegler do all the heavy lifting. Still adorable, though.

Sia couldn't have predicted that she'd be apologizing for casting LaBeouf opposite Ziegler in this video, but that's what happened when a more or less misguided pedophilia controversy broke out shortly after its release. LaBeouf, who shows off his raw physicality while bounding across this cage like a wild animal, has the distinction of being the only Sia stand-in who does not wear the platinum wig. That raises the question: Does this make him a Sia stand-in at all? We may never know the answer.

The "Chandelier" video became so iconic so fast that it was almost SNL's duty to parody it. They finally did for their Halloween episode, when Jim Carrey and Kate McKinnon donned the leotards and wigs for a warped version of the dance that took them from the stage to the audience and back again in a tornado of spin moves and arm flails. Yes, this is a spoof, but it is no less cathartic.

4. Allison Holker on Dancing With the Stars

Of all the Sia performances in the land, this one features the best (re: most professional) dancing. And of all the performers to take on Ryan Heffington's evocative "Chandelier" choreography, DWTS' Allison Holker is the most experienced and arguably the most talented. Maddie Ziegler more than holds her own opposite someone who's probably been dancing twice as long, but Holker's mastery of the art form is on display as she prances, leaps, and twirls across the floor like tomorrow doesn't exist.

When Seth Meyers introduced Sia with a "very special guest," no one could have guessed that Lena Dunham's cherubic face was about to pop into the frame. Dunham, who most likely had some experience with interpretive dance as a student at Oberlin, was Sia's first celebrity double, and the first to lip sync, making her the most literal stand-in for Sia so far. She also wore a white suit instead of the standard nude leotard, which is a great opportunity for a Lena Dunham-naked joke that we refuse to make.

2. Kristen Wiig on the Grammys

It took a second to recognize Wiig as Ziegler's latest dance partner, but the physicality, expressiveness, and committment—exactly what made her a star on SNL—were on full display from the opening notes. Wiig's ferocity ebbs and flows alongside the song's momentous peaks and valleys, but her intensity never wanes. We can watch this forerever.

Sia's "Chandelier" video, which first introduced us to the Dance Moms star is currently sitting at nearly 525 million views. "Chandelier" is a terrific song, but it is not 524-million-views terrific. Maddie, you have our hearts and we don't ever want you to let go.