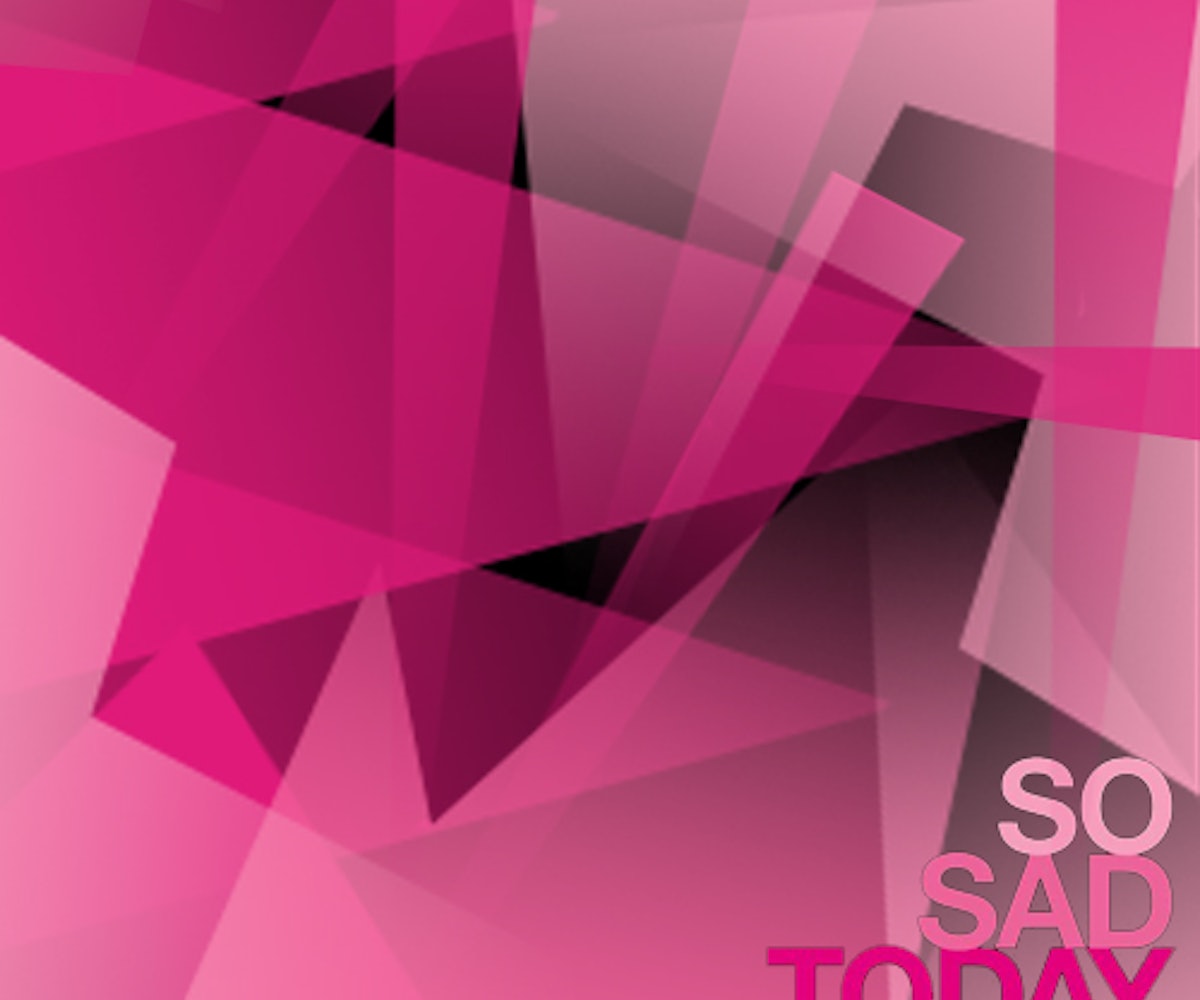 In 2012, So Sad Today appeared as an anonymous Twitter account with a morbid sense of humor, tweeting out pitch-black but somehow hilarious musings like, “I built this hell for myself and now I'm gonna decorate.” The account’s trademark balance of darkness and wit—its author clearly someone who loved hating themselves—garnered it more than 300,000 followers, including names like Katy Perry and Miley Cyrus. But were these the thoughts of someone battling genuine demons, or was it parody account created by a very creative writer? A little bit of both, it turns out. In May of last year, a published poet named Melissa Broder revealed herself as the beautifully tortured mind behind @SoSadToday, because she was planning on publishing a book under the banner. That book—a collection of personal essays exploring a cocktail of sexuality, the Internet, and anxiety—was released on March 15. We recently spoke to Broder, who works by day at the multimedia creation platform NewHive, about revealing herself as @SoSadToday, the authenticity of Internet presentation, and the intersection of her poetry and persona.

With @SoSadToday, you focus on one specific element of yourself rather than displaying yourself entirely online. What effect do you think this has on that part of yourself?

@SoSadToday, in some ways, was something I needed to create because I needed an outlet. I felt like I had to wear this mask in life, part of it was pressure I put on myself. I’m a perfectionist and I worry that others are judging me. @SoSadToday was this way for me to peel away the mask a bit and reveal some of the stuff that I was scared to reveal in waking life, which the book does even more. In terms of focusing on that part of myself, I feel like mental health is an ebb and flow, and if you look back at all the tweets on the Twitter account you can see that. Last spring I was feeling bad because I had just changed my psych meds, and I was really scared that I was never going to feel okay again. During that time, the tweets were really dark and I got a lot of really nice supportive e-mails, whereas the e-mails are usually people asking for advice. I got this e-mail from this woman who’s a nurse and also takes psych meds, which was so comforting because she has the same experiences. I feel like on any given day, no matter how good I’m feeling, there’s always that moment when I’m on the street and I see this young, hot surfer couple and I’m just like,

. It’s great to be able to tweet that stuff from @SoSadToday because even when I’m in a better place with my mental health, I still have low self-esteem and I’m still questioning everything.

When you first started the account, was it completely separate from your regular life?

Zero people knew—it was anonymous for years. It was the only secret I ever really kept. As you can probably tell from the book, I’m not like a buttoned-up, super-secretive person in general. At first, I told one person, and that was a big change with that possibility of judgment. But when twenty people knew—friends and people in my circle of artists and Internet friends—that was cool because it was fun to reveal it. They’d talk about @SoSadToday and I would be like, "What would happen if @SoSadToday retweeted you four times in a row?" and they’d be like, "That’d be so cool." Then I would retweet them four times in a row. So many people were surprised because a lot of people who I was friends with were following it and didn’t know. Then when I broke my anonymity, I was scared that people would judge me and think that @SoSadToday was better than I am. It was basically just dealing with impostor syndrome.

Do you think that tweeting on @SoSadToday has changed your poetic voice outside of @SoSadToday, or do you feel that you have successfully compartmentalized these characters?

It’s funny because people ask about characters, but I feel like it’s different parts of myself—persona is something we step into and embody. @SoSadToday is just a part of me. The only thing that couldn’t have been understood a hundred years ago about [my next book of poetry]

is the title. A poem in the book is titled "Last Sext

and my agent told me to use it as the title. I feel like so much is disposable in contemporary culture. @SoSadToday is in some ways, getting to enjoy that shit can be so disposable, and seek refuge in that disposability, since there’s kind of a levity in it.

I’m feeling more existential right now because of the anxiety brought on by the book launch, and I’ve been channeling that into the search for a signature scent. The perfume I’ve been wearing for probably 12 years just smells like a grandmother, it’s disgusting. I’ve been to Sephora four times, obsessing over finding a signature scent. Obviously, it’s never about the signature scent, it’s about feeling vulnerable right now [because of the book]. I elevate this minutia to the point of importance to kind of hide from the deeper stuff. In poetry, I’m not trying to hide. I feel like @SoSadToday has made my poetry stronger in that sense, because I have a place to dump all that crap.

Can you explain your work at NewHive?

I work for NewHive, and it’s an amazing job. I work from home, with my dog, which is great. I think it’s definitely affected my agoraphobia and fear of people a little. I used to be forced to be in an office for a long time, which could be uncomfortable when I was going through shit, but at the same time, I had to be out in the world. Now I’m at home a lot more. I work for NewHive as the director of media. I run their blog, I get media for artists and artistic projects. Sometimes I curate new projects and new series, like our poetry series there. It’s a really fun job.

Do you think it affects your written work?

I met Zach Verdin [co-founder of NewHive] because he commissioned me to do some poems for him. I wrote all these poems, and the constraints of NewHive informed the work. I haven’t done a lot of stuff that’s visual [and for NewHive] I handwrote the poems for a project called

. [Zach] asked if I could do some publicity work for them full time. I realized that NewHive combined all of my great loves—writing, art, net art, and Internet addiction. I learned a lot because I wasn’t really familiar with the art world. I’ve learned so much in the almost two years about ‘net art and code.

Which contemporary poets do you admire?

There’s a poet named Morgan Parker who I really love. She’s also being published by Tin House this summer. I’ve been reading a lot of her work and I think she’s awesome. I like CAConrad a lot and Dorothea Lasky. There’s a poet I read recently and thought she was amazing, and I’ve been reading more of her stuff, her name is Diamond Sharp. Also Joshua Jennifer Espinoza.

Do you think social media will eventually gain respect as a medium, just as prose and poetry are mediums?

Well, poetry certainly doesn’t have the respect of the world-at-large. I’ve told people that I’m a poet, and they’re like, w

If you tell an investment banker you’re a poet they might say cool, but they’re probably like,

, For some people Instagram is everything, especially if you’re a DIY model. But I don’t want to see any more people, I’m not even on Instagram. I don’t need to see that many pairs of eyebrows that are better than mine. I have enough things to feel shitty about.