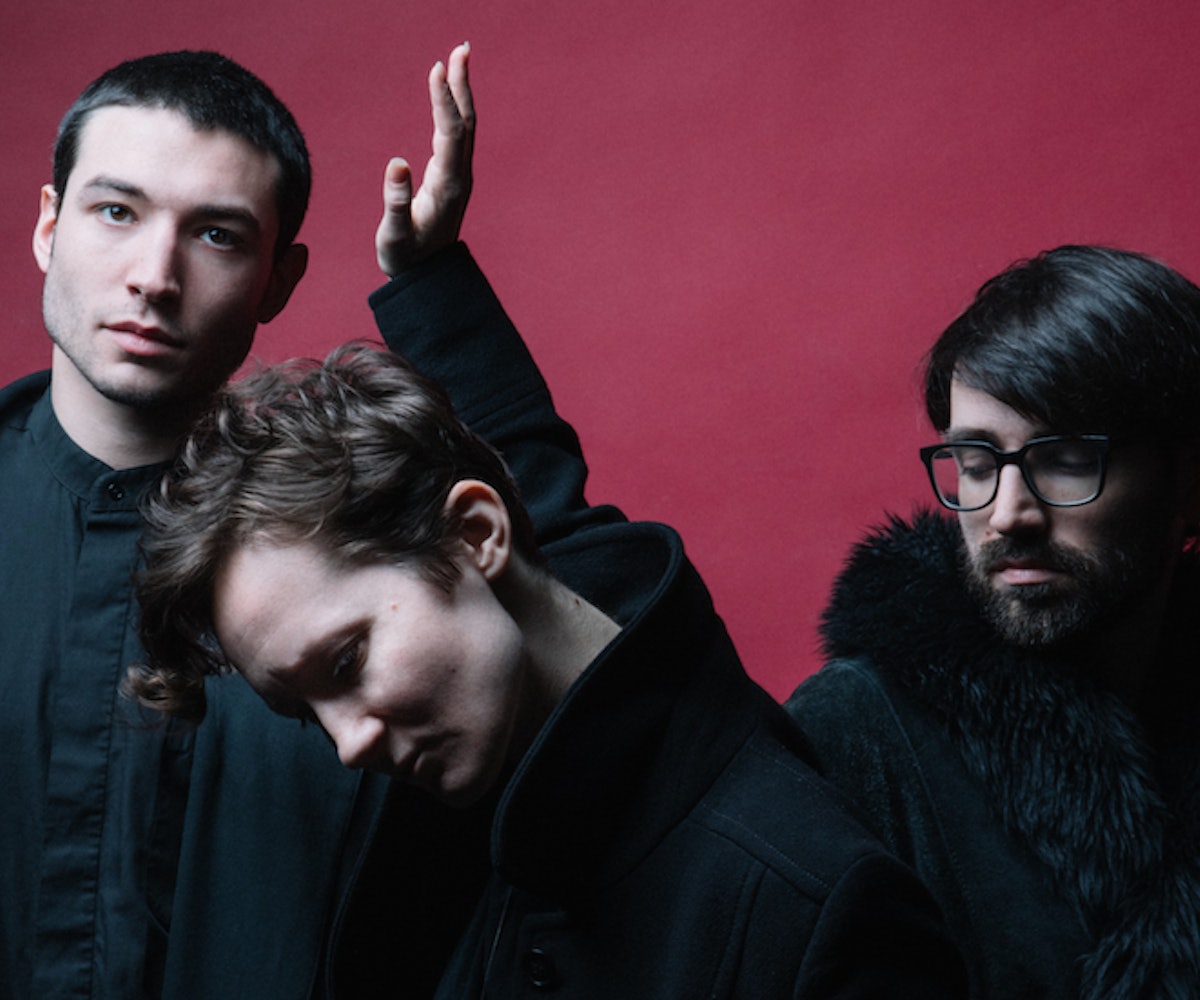 photo courtesy of sons of an illustrious father

Sons of an Illustrious Father began 15 years ago, at a hippie-gothic private school where 10-year-old Ezra Miller fell in love with 12-year-old Lilah Larson: “I was like a cool, older rocker chick he had a crush on." The youth, who had become interested in opera as a rebuke to his bluegrass-obsessed parents' folksy ways, sang Lilah an aria in courtship; she winced. “Alto soprano back then," Ezra recalls. “A shrill aria." In another attempt at romance, he thrust upon her a cassette of The Smiths' Meat Is Murder, and advised, “You know, you really shouldn't eat meat." Lilah decided, instead, to offer her hand to an older drug addict who pierced his nose during class. “The choice we've all made at one time or another," says Ezra philosophically.

Tweenage romance was not meant to be, but what did happen was arguably more magical: Two creative, misfit queer children find one another in the world, and an intimate, soul mate-y friendship roots. They grow up and make music together. “We started jamming together in high school, in various basements," Lilah recalls. Sons of an Illustrious Father was initially an "acoustic folk-country gospel cover thing" she was doing with another person, while she and Ezra had a "slowly developing, mostly improvisation-based metal duo act." When Lilah grew deeply distressed at the news of her father's departure, Ezra's solution to the pain of it was to merge the two bands, with the metal project becoming the rhythm section for a new iteration of the Sons. From the start, they have been utilizing music to combat demons.

Needing a bass player for a tour, they find Josh Aubin, a musician living in a punk house stuffed with the abandoned antiques of a former resident. A chandelier hangs, covered in tea bags; a vessel contains the runaway roomie's sister's ashes. Behind the house sits a dumpster for a pizza restaurant, abundant with dive-worthy pies. Lilah and Ezra don't realize that Josh is not merely a bass player but a veritable musical savant who can play many instruments and only picked up the bass a month earlier, for the tour. Of course, he becomes an integrated member of the group, his own sensibility, musical and intellectual, merging nicely with the others.

The terroir of their beginnings—gothic hippie punk, pain and connection, a trading and mashing of instruments and genres—is audible in their new release, Deus Sex Machina: Or, Moving Slowly Beyond Nikola Tesla. The album starts with the straightforward, intensely rousing anthem "U.S. Gay," which name-checks Valerie Solanas and Matthew Shepard, sung mostly by Lilah, whose glorious, soaring vocals are offset by Ezra's feral, anguished growl. The effect is breathtaking, inspiring a listener to accept the band's offer to "fuck shit up" or "fix it up," depending on how you happen to be feeling about the misery of our culture at the moment of listening.

Deux Sex Machina is an album for the apocalyptic times we are experiencing. The band's PR materials read like the thesis of an especially promising queer theory scholar, likening the record to a funeral, the inclusion of machine a metaphor for embracing of the entirety of our world—the plastic, ruined world, as well as the hopeful, thriving one. “Everything we've lost is beautiful and deserves celebration on this planet, and everything we haven't, deserves celebration and active appreciation," says Ezra. “And protection and cultivation."

This reminds me of a graphic novel I recently read, Witchbody by Canadian academic and witch Sabrina Scott. The work says that witches, and the rest of us, cannot conveniently demonize the degraded parts of the planet, but must recognize—value, even—these destroyed landscapes, even as we advocate for environmental justice. I mention the work to the band as we sit together, not in an underground lair dimly lit with a sputtering Tesla coil, which would feel more correct, but at an excessively sunny French restaurant tacked onto a SoHo hotel. Which actually fits into the metaphor quite nicely.

“The unnatural is an extension of and thereby part of the natural," Ezra agrees. “Any practitioner—whether it's magic, or art, or the sciences, or healing—has to work with existing factors that might be outside of what the practitioner would imagine as being ideal." For Ezra, this embrace of the imperfect and problematic resonates with alchemy, another of the band's occult interests.

“It's sort of the central premise of alchemical practices, making gold out of so-called inferior metals," he explains. “Alchemy was illegal because it distorted currency standards based on gold, because they were so good at making so-called 'fake gold.' But it wasn't fake gold, it was real. The spiritual practice that western esotericism associates with alchemy really uses that true practice as a metaphor for our practice in life; taking the junk of your existence—and our collective existence here on earth—and making it work."

"Extraordinary Rendition," named for the governmental practice of kidnapping of foreign nationals, practiced by the U.S. and condemned by the U.N. as a crime against humanity, is one of the most powerful tracks on Deus Sex Machina; a precision-sharp storm of guitar and drums, Ezra's grief-tangled voice a passionate, sonic spiral above the waves. The brutal story underpinning the song (“But do you feel the bones that you can't own/ Rattle the moans of the loner's vacant cavities") also carries a desperate, hopeful wisdom (“But what our brains simply cannot endure/ Is the oh so simple fact that we're all derived from one source"). Listening to these intellectual fight songs feels like you are listening to the soundtrack of a dramatic rock opera. Then you realize you are: It's the soundtrack to our life today, as migrant children are locked parentless in American warehouses and whales gorge themselves on plastic and white women call the cops on black people barbecuing, checking out of Airbnbs, hanging out in a Starbucks, selling water to fund a trip to Disneyland.

Ezra speaks how when the band is apart, engaged in their other work—his films, Lilah's solo project, Josh's amazing-sounding zodiac space shooter video game "Space Unknown"—the daily pain of existing in 2018 can get, perhaps deliberately, overlooked. “And it always feels like when we come back to the band—because that is our work—it creates and allows this space to allow ourselves to feel the sadness and feel the sorrow. And to feel the fear. It feels really good sometimes to just let it feel awful. And let that resonate."

“And to let it move through you, and to alchemize it into something beautiful that you feel good about," Lilah adds. “Return it to the world."

In the Sons' collective mind, America is grief-stricken from a history of death and trauma; only, we're mostly lodged in the early, denial-level of Kubler-Ross's Seven Stages of Grief. “We're excited for the other parts," Ezra says. “Like the anger." The Sons are already there. Though the themes on the album may be heavy—like the drums, and the bass, and the guitar—there is a vibrant, violently alive passion, a loving anger, perhaps, that burns off the numbness of depression that could come with handling such material.

Seeing the Sons live, as I was lucky to one Saturday night in Los Angeles, is catharsis by osmosis; the pure power of their ragged earnestness, their breathless pain transformed into raw beauty before you, the beauty of this trio of queers taking on the compromised soul of our culture and transmuting it through the magic of music, was everything I needed to feel, strongly if momentarily, better. In addition to songs from the new album and the rollicking, bluesy "Conquest" from the 2016 album Revol, the Sons performed two covers: a performance of "I'm Afraid of Americans" so devastating it signaled Bowie in the beyond and flooded the room in his spirit, and an unexpectedly cuddly a capella of "All Apologies," sung by the trio in a swaying embrace. When they crooned "everyone is gay," the crowd erupted in giggles.

What a gift it is that artists give us. They eat the world, the best and the worst of it, and alchemize it to gold—real gold—something the powers that be will always try to outlaw for the ways it confuses and ruins their systems. Influenced by Bikini Kill and Patti Smith, Nikola Tesla and Peter Grey, Kim Gordon and Jimi Hendrix, LSD and Rugrats, X-Ray Spex and Opera, Sons of an Illustrious Father are rock wildness at its most lucid and intellectual, protest music that is creating change by altering the brain chemistry of their listeners. Exiting the Echo Rock club into the cool L.A. night, I felt giddy and renewed. The empire is crashing, and it won't go down without a fight, but we have one another and rebellion in our bodies, in our blood, and in our music.

NEXT UP
Culture
Not One, But Two BTS Documentaries Are Coming
Entertainment
Megan Thee Stallion Says A New Album & World Tour Is Coming In 2023
Culture
A Britney Spears-Inspired Musical Is Coming To Broadway
Culture
Spotify Wrapped Is The Only Social Media That Doesn’t Lie