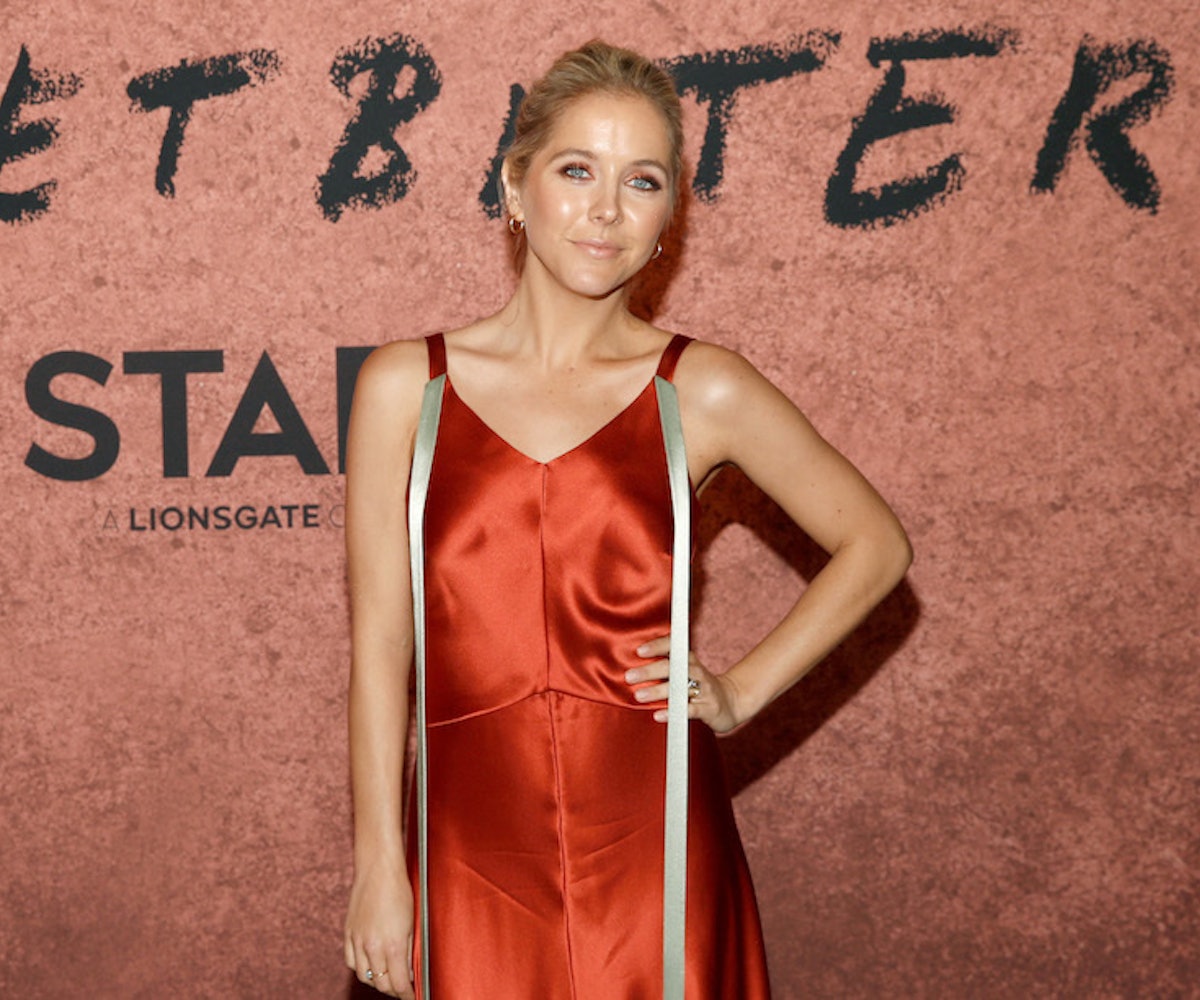 "I just worked 24 hours a day for six months," says author Stephanie Danler when I ask her what it was like executive producing the Starz series adapted from her 2016 best-selling book Sweetbitter. "I didn't see my friends, I didn't see my family, I didn't see a doctor, I just worked. I think that's part of what bonds you so intensely to the people that you're collaborating with. It's very similar to a restaurant that way. You build a sort of temporary family."

Danler would know. After working as a waitress for years, she published the popular novel, lauded by The New York Times as "the Kitchen Confidential of our time," that follows 22-year-old protagonist Tess (played by Ella Purnell in the series) as she arrives in New York City. After taking a training job at one of Manhattan's most prestigious restaurants, Ella begins to develop a discerning taste palate and gets tangled up in a relationship with brooding bartender Jake (Tom Sturridge) and worldly sommelier Simone (Caitlin FitzGerald), who share a past. What follows is a crash course in fine wine and food, the restaurant industry's backdoor dealings, and sexual desire.

Ahead of the show's premiere, we chatted with Danler about what it was like translating the book into series, why Simone is such an enigmatic character, and how Purnell exceeded all Danler's expectations.

Your book was such a huge success. Was there a lot of pressure for you going into the series?

No, I didn't think about it like that at all. I felt excitement to revisit the world and the characters and expand on the story and really spend more time with everyone. I guess I never thought about whether the book was gonna succeed or not. I think that is a really hard way to be as an artist, thinking about that stuff, so I remain kind of blissfully unaware. I put pressure on myself for all sorts of things, but this isn't one of them.

Was Ella Purnell how you envisioned Tess when writing her?

Nothing like what I envisioned, and she taught me so much about that character. She has so much natural energy and vigor. She is a living, breathing, 21-year-old young woman, and I think that writing about a 22-year-old in the abstract is very different than watching one in person. She's funny, and Tess from the book was never funny, she was quite blank; and so [Tess] really belongs to Ella at this point. Tess from the book is one thing, but Tess... as soon as Ella started acting, I started to write for her.

I felt like when the book came out, a lot of the interviewers focused on Jake, but I thought the more interesting relationship was between Simone and Tess.

I think it's more interesting, as well. I think that it's a complicated and emotional bond between two women. I think there's something maternal about it, and I think that, just in the same way that family bonds can be toxic or limiting, I think this one has dark side, as well, but I think at the end of the book, the one who's changed her and hurt her is Simone, not Jake.

Do you think their dynamic translated as well to the screen?

I thought it translated so well. I think that Caitlin FitzGerald brought a vulnerability and graciousness to Simone that she doesn't have in the book. I think when you three-dimensionalize someone, they can't be a statue who speaks in profound commandments all the time because it's not believable, whereas in a book, you get away with that.

Caitlin really fleshed her out and made her into a sympathetic human, which makes her all the more fun to watch as she struggles with this new relationship with Tess. I love, in episode four, watching these two women sort of fall in love, and then watch Tess get rejected... to me that is the fulcrum point of the season.

What do you think makes Simone such an enigmatic character?

I think that we forget how rare it is to find a woman in her late 30s who has chosen not be married with children and has chosen to stay in this life because it gives her certain freedoms. I think that what we see in Simone, especially the way Caitlin plays her, is a purity that she once maybe had the same spirit as Tess, and we also see the ways in which she's trapped herself, and I think that someone in a trap is very dangerous.

When the book came out, a lot of people also said that Tess was not a very likable or relatable character. How do you react when people say that?

I think that it's to be expected, a variety of opinions about your work. I think the point of art is to stimulate conversation. I was mostly surprised by the assumption that we read to find things relatable instead of to learn, and I, also, think that people have a very hard time with young women making bad decisions or being in complicated moral territory. She's testing her boundaries, which is what growing up is about. It's an incredibly natural process. I think, if there isn't some sort of punishment or epiphany, it makes people even more uncomfortable, and I am happy to do that. I'm happy to bring an unlikeable character forward, because she is very real, which is the flip side to anyone who has found her unlikeable or not relatable. There's obviously so many women that have.

How do you think Jake appeared differently in the series?

What Tom brings to him, I think, is a reserve that's very powerful, but also a playfulness that he doesn't necessarily have in the book. He's very serious but something about the way that Tom's eyes light up when he's in the mood to flirt makes him the character that much more lethal.

Were there other actors that surprised you and brought something to a character that you didn't necessarily think about when you were writing the book?

Every single one of them. I think that Evan Jonigkeit brings so much depth to Bill that it makes Tess choosing not to be with him a very difficult decision, but that makes it a stronger decision. Daniyar [who plays Sasha]... I mean, his face is like an opera, and we just couldn't stop giving him stories, and his exuberance for life is matched by his ability to carry pain. And Jasmine Matthews [who plays Heather] and I talked about her experiences being the only African-American server in a mostly white, front of house, and that sort of divide, and she brought so much strength to her character.

Some people criticized the show's place in the #MeToo movement in view of how much sexual harassment allegations have come out of the restaurant industry. What was your response to that?

It wasn't criticized, it was just questioned. The show naturally displays the entire gamut of sexual politics from consensual flirtation to abuse of power. It mirrors the reality of a 22-year-old girl in 2006, so, if anything, it's proof of why the #MeToo movement needed to come around.

The work speaks for itself. When those comments came out, it was based off a minute and a half trailer, and I'm very confident in the work and in the book, that I wrote before the #MeToo movement even existed, that happens to be incredibly topical right now.

One of the things that I loved about the book were your descriptions of the food and the senses it brought up. What helped translate that to screen?

The visuals! Having the beautiful food and having the closeup of the oyster. That's the struggle with writing—instead of letting you see this oyster kind of shimmering in Jake's hand, I had to describe it, and so having this sort of colorful, ever-present bounty, really was a shortcut. It was wonderful.

I thought the oyster moment was really beautiful when she tastes it and you see the ocean.

Right, that's her first sense memory. That's her first investigation into what it means to have a palette. I think that when you're learning about wine and food, you're asking yourself, What do I taste, what do I taste, what do I taste? and you circle through these images in your mind to arrive at something, so, in Simone's case, she circles through images [that the wine brings up in episode one] and then she says, "This is the Gevrey-Chambertin Armand... the 2000 vintage." But for Tess, she's at the beginning of her journey and all she can say is "salt."

After two years of writing the book and having it come out, how does it feel seeing the whole cycle almost repeat itself for the series?

It's completely surreal. It's like, I already had fictionalized my experiences, and now I've fictionalized them again and visualized them. Occasionally, we'd be shooting, and it would be like waking up in my own dream. I don't know how to describe it yet, actually. It's totally crazy.

Are there any similarities between how you felt before the book came out and how you feel now before the series premiere?

You're in a sort of purgatory. You start to do all of this press, and no one has seen the show yet, and I always hate that because that's hype. There's no concrete piece of work to actually discuss, and so now that people are seeing it, for better or for worse, I'm relieved. I'm grateful that I had the experience with the book because it's left me much more relaxed with this, as far as people are not gonna like it. Some people are gonna love it, and the lesson that I learned with the book is that you just keep working. It's such a privilege to get to write. The rest of it doesn't matter at all.

Did you feel like you had a lot of exchange with the showrunners of the series, or did they just naturally get it?

I mean, I was on set single every day, so there was tons of exchange, but, they got it from the start, and I don't understand the first thing about making television, or how a camera works, or anything. I think between the book and being able to ask me questions, these—when I say brilliant, I'm not exaggerating, in any way, shape, or form—these brilliant people, letting them make all sorts of artistic decisions was so exciting.

That's amazing to hear because I feel like it must be difficult to let go of it since it is kind of your product.

Of course, but you start in the writers' room—letting go—and by the time you get to filming, it's just a different animal. It's a totally different animal. Different characters, and different pace of storytelling, so you really kind of think this is from the world of my book, but this is not my book. Nothing will ever touch the book.

Sweetbitter premieres tonight, May 6, on Starz.