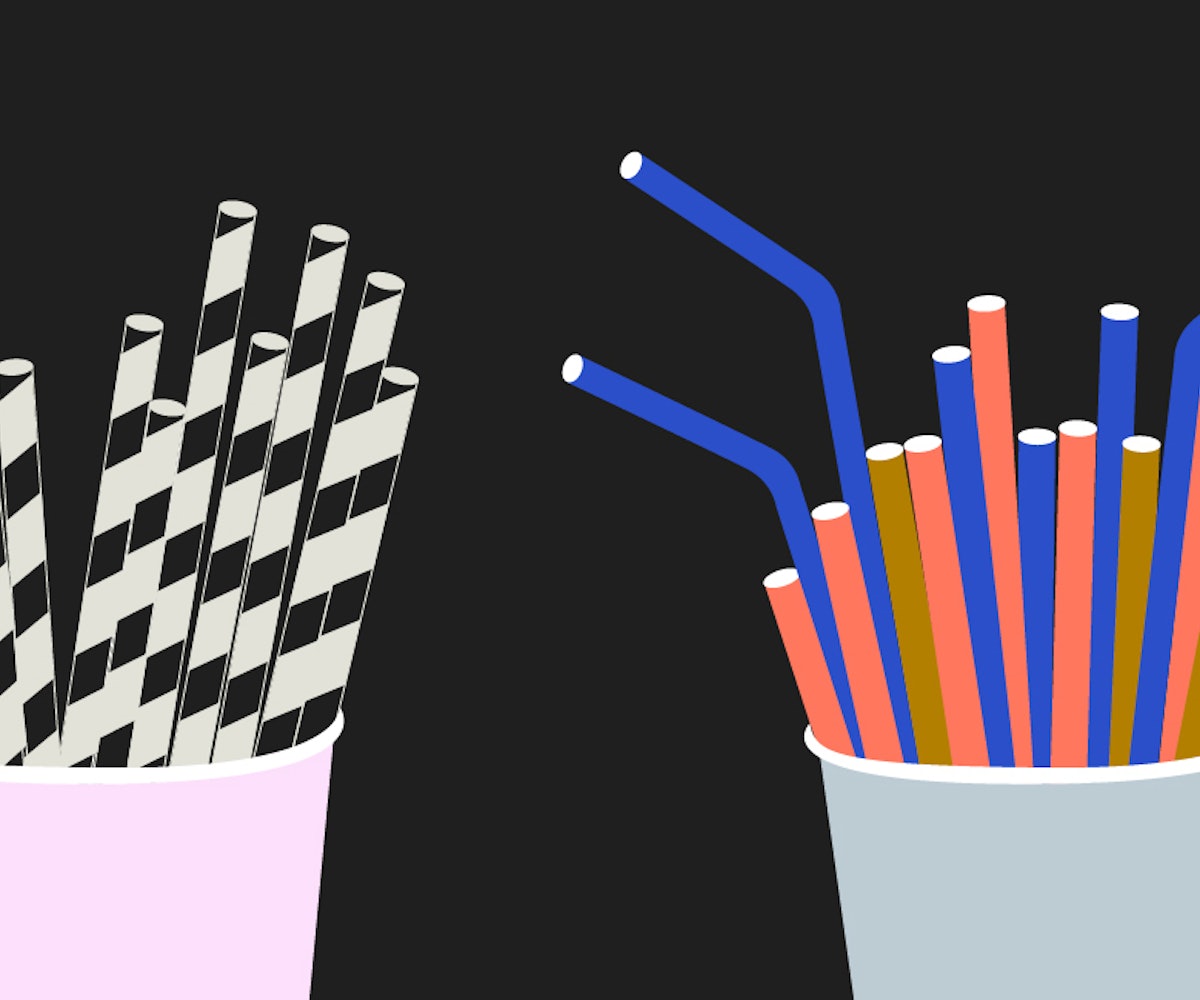 It seems as though it’s impossible to escape the current debate surrounding straws—not least because it doesn't seem like much of a debate at all. As sustainable technology continues to progress, the replacement of plastic straws with more eco-friendly solutions seems like an obvious fix. Because while plastic straws account only for roughly 0.03 percent of the 8 million metric tons of plastic that enter the ocean each year—not a particularly large amount compared to the biggest polluters like cigarette butts or plastic bags—it’s not a meaningless figure. Why wouldn't we want to solve this environmental problem? However, framing the current debate about straws within a solely environmentalist context showcases a common cognitive blindspot, and demonstrates why there aren't any black and white issues when it comes to sustainability and to society's blind spots regarding disabilities.

When you grow up perfectly healthy and able, it can be hard to conceive of a life in which you're not those things, and you don't think of health as a privilege, so much as you do a function of morality. You don't see how using public transportation, walking or biking to work, buying groceries at a farmer's market, or forgoing the use of a straw aren't signs that you're a good, responsible person, but that you're lucky to be able to do those things. While all those activities seem pretty mundane to able-bodied people, they are all things that are emotionally and physically demanding, if not fully unachievable, for many people with disabilities.

The recent fervor for "straw bans" has made it clear that lots of able-bodied people don't value the experiences of people with disabilities, or even care to learn about them. As the anti-straw rhetoric became increasingly hard to ignore in recent weeks, disability activists began to speak out about why a straw ban could be devastating for countless people, but their protests were quickly met with dismissive responses saying that disabled people could simply use non-plastic straws. But here's the thing: Metal, bamboo, glass, pasta, and acrylic straws come with a serious risk of injury for a number of disabled people. They may not be able to control the amount of pressure they place on the straw with their lips or teeth in order to drink, meaning they may chip their teeth or tear up the straw. Conversely, they may have a lack of fine motor skills, which would put them at risk of damage and cutting to the inside of the mouth. Silicone straws look like the best alternative—or they would if they didn’t (reportedly) “taste somewhere between dental dams and condoms.”

The issues with suggested alternatives go further than just material issues—there's an emotional component, too. “It's a very contentious issue for many people who have a special way they bend their straws to use. It's the way they've always done it,” Edith Prentiss of disability advocacy group Disabled in Action tells me the day after New York City’s Disability Pride parade. The day before, a booth at the parade had been set up to allow attendees to try out newer straw options, but the issue of developing a uniquely bendable non-plastic straw is one that hasn’t fully been solved.

Ultimately, though, this is an issue of practicality, and sensitivity to disabled people, for whom reusable straws could present a health risk. As Hannah Street Elliott, associate editor at Brooklyn-based publication The Creative Independent, tells me: "The reusable straws will collect bacteria... I cannot clean my straws and don’t want to have to ask someone to do so.” This is the most commonly cited issue amongst people protesting the bans. If someone has a disability that requires them to use a straw, odds are low that carrying and cleaning a straw is at all practical for them.

“This is not about straws granting disabled people a certain ‘way of life,’” Elliott continues. “We deserve the way of life abled people get by not worrying how they will sip their drink at dinner with friends. It is about people with disabilities being allowed into the same spaces as abled people without being bothered and discouraged to leave their homes, for fear of embarrassment, or being questioned for their needs… Let us drink in peace.”

Unfortunately, this way of thinking, this refusal by able-bodied people to accommodate the needs of the disabled is pervasive. Often without noticing that they’re doing it, able-bodied and -minded people often lampoon or shame people for using products that make the lives of the disabled easier, dismissing them as unhealthy, unnecessary, or a waste.

A simple example of this is the As-Seen-On-TV product The Magic Tap, which makes it possible to pour drinks from a large container without lifting up that container. While the well-known infomercial may primarily feature messy children spilling milk and juice all over the place, the largest group of people to actually benefit from the development of the product is not parents of young children but, rather, people with disabilities who cannot lift and pour their own drinks. There are a number of reasons disabled people may not be able to do this: severe autism may affect locomotive skills; diabetes and Parkinson’s can cause hand tremors; or, as is the case for many people with varying disabilities, the muscle strength is just not there. However, the product’s usefulness for people who are disabled doesn’t prevent it from being mocked by those who aren’t. And while it would be easy to go after the people mocking it and say that they’re being bigoted and phobic, it’s not quite that simple. The product isn’t directly marketed as being for people with disabilities. Nor is the Easy Feet foot scrubber, or the RoboTwist, which electronically opens jars at the push of a button. Yet, each of these products serves a distinct and necessary purpose for people with limited mobility and physical strength. In the case of each, it’s easy to disregard them as being a symptom of cultural laziness. But, as Prentiss says, “It's silly until you have to use it.”

While As-Seen-On-TV products might be easily dismissed because they seem obscure and specific, there are other products and services that aid disabled people in their daily lives that are much more common but equally stigmatized. Someone who struggles with agoraphobia—a severe anxiety disorder in which the afflicted fears venturing to places that may cause them to panic or feel trapped, and may not be able to leave their house for days on end—might use a grocery delivery service like FreshDirect or InstaCart instead of going to the store. Someone with the same affliction and no in-house laundry, or who is not physically able, may outsource their laundry via a company like Cleanly or Flywheel. And yet often these services are written off as being purely for rich or lazy people. Instead, though, their existence allows for people with disabilities, physical and mental, to lead a life that is, according to Prentiss, “more livable.”

Another product that makes life more livable for people with all kinds of disabilities is the microwave, an appliance about which public sentiment is mixed at best. The internet is chock-full of blog posts about living microwave-free and how microwaves can irradiate your food—despite plenty of evidence to the contrary. But when the concept of microwaves is brought up, Prentiss doesn’t mince words. “I'd be dead without a microwave,” she states. “I haven't even had gas in my apartment for at least 10, 15 years… I get two days' worth of food and then spread it out over a week. It's just so much, even opening a pop-top can, I can't do it. I just don't have the strength in my hands.” But her perspective on this extends past her own disabilities: “I was a geriatric social worker and, believe me, none of my clients would have had stoves if I had it my way. Everyone would have had a microwave of the appropriate size and that's the end of it… They get their meals on wheels, they can pop it in their refrigerator and heat it up later.”

It's exhausting, though, to have to keep speaking up to defend a perfectly reasonable way of life. “The thing I keep coming up against and up against with able-bodied people is that they expect anyone with a disability to go out of their way to appease the able-bodied people. It's never the other way around,” Prentiss says. This is echoed in Elliott’s statements to me, as well as brief statements I received from other disabled peers. Elliott noted she has a hard time riding the bus, while another person noted that their hearing impairment rendered them unable to hear train announcements, making navigation particularly difficult when train kiosks aren’t updated with consistent information. Prentiss had to contact the NYC Department of Buildings in order to get a ramp installed in her apartment building—despite the fact that it should have been there already, as the presence of a ramp is a legal requirement.

So while many people might dismiss the straw debate as being a silly one to get worked up over, it’s a minute piece of a much larger, very important battle. People with disabilities are fighting every day for increased visibility within mainstream society but are frequently met with shaming. While the problem is complicated, the solution is simple enough. Instead of pushing back, abled people can take simpler solutions upon themselves. If you don’t need a straw, don’t use one—ask for your drink without it. If you’re going microwave-free, celebrate your achievements without criticizing those who do use microwaves. Don’t dismiss people who use delivery services as lazy. Moreover, consider in your day-to-day life who benefits from receiving certain services and products. Just because you’re unaware of someone’s disability doesn’t mean they don’t have one (invisible illnesses exist, too), and taking the time to step out of your own perspective can be rewarding. Not just for you, but for the people whose lives you are making easier just by taking the time to remember they exist.