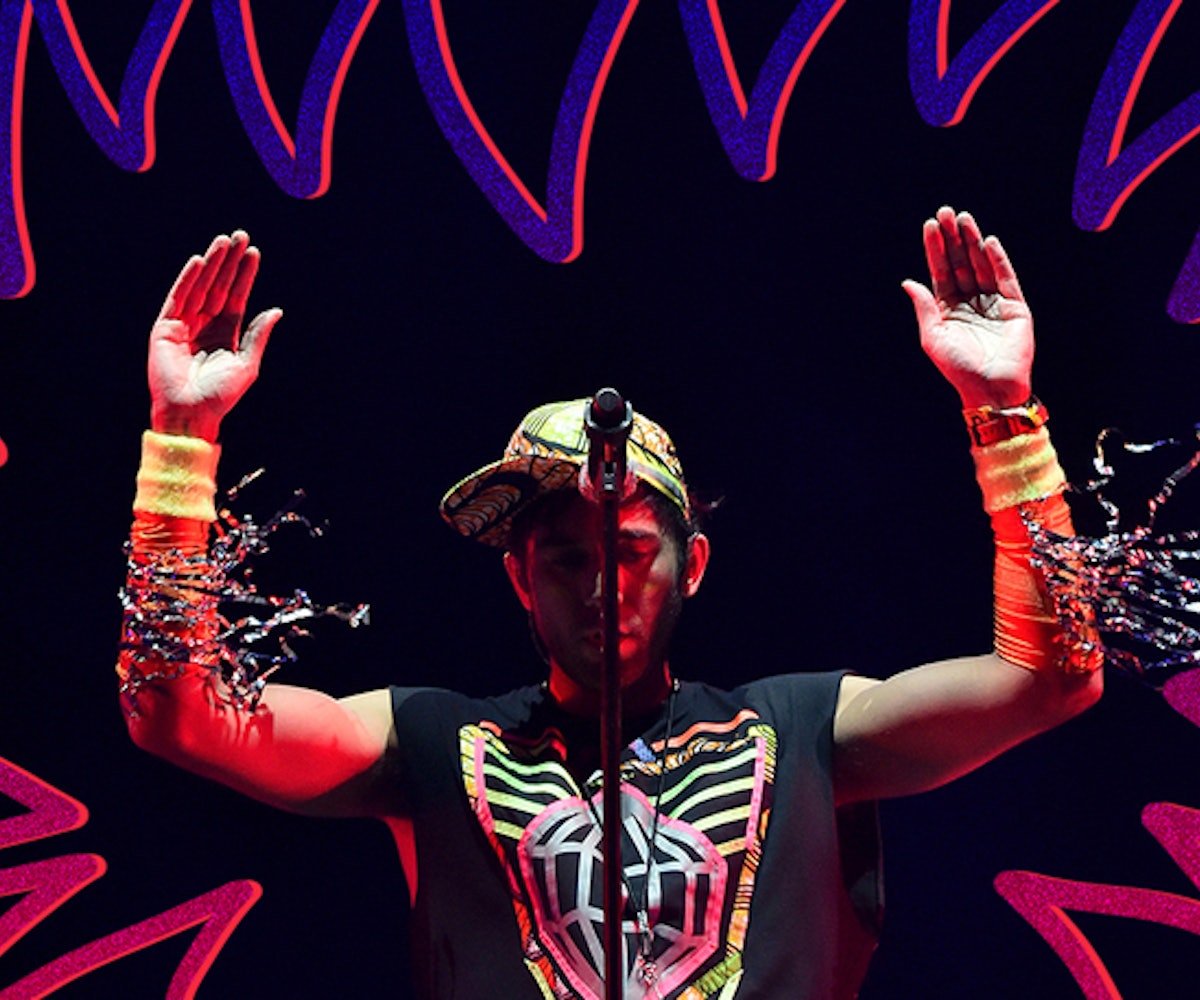 Sufjan Stevens and I have been acquainted for 11 years. Well, not personally. I only know him through his music, but he and his lore have been in my world for a while now. I had never seen him live, though. But I have turned to him when I wanted to feel intellectual and chill, to feel nostalgic for my innocent teenage years, to feel connected to an individual who, too, has struggled with the concept of faith. Stevens isn't a God, but something of a higher force compels him, and, as a listener, you feel that force—it's humbling and almost frustrating. And it's best felt when seeing Stevens live, which I recently, finally did.

Planetarium is Stevens' new album with guitarist-composer Bryce Dessner (The National), percussionist James McAlister, and composer Nico Muhly. It made its live debut as a commissioned work in 2012, with no word on an actual studio album version on the horizon. In an interview with Pitchfork, Stevens said the four weren't planning on waiting five years to record Planetarium live, but that it "feels relevant to where we are in the world to be thinking about really fundamental, primal things like peace and war, good and evil, the sacred and the profane." Indeed, the album's 17 tracks are riddled with Greek and Roman mythology and laced with allusions to the universe. They also reference specific moments in Stevens' life (like his first sexual encounter at a Methodist summer camp), which hold a mirror to our troubled world. It's an exhausting album, but worth the challenge. The abyss will shout back if you shout at the abyss long enough, right?

A good live show means the world around you shifts—hell, maybe even transforms completely—into the vision of the musician on stage. For an hour or more, you're in an atmosphere of the musician's making, and everything outside it can't touch you. The paradox, though, of a Stevens show, is that it doesn't merely transform your world, so much as it asks you to consider it more intently; at least, this was my experience with Planetarium.

Late this summer, Stevens & Co. brought Planetarium to BRIC's Celebrate Brooklyn festival at Park Slope's Prospect Park Bandshell. It was the second of four total tour stops and a behemoth of a show. A small horn and string section filled the stage, with Muhly, McAlister, Dessner, and Stevens placed throughout its expanse. Stevens was covered in glitter and stood center stage, coincidentally (or not) placing him in the center of the planets spiraling behind him via projection; his vocoder use made him feel alien. Yet despite the aggression Stevens explores on tracks like "Jupiter," he felt gentle and at ease—a pleasurable contradiction. Planetarium is more insular a project than anything. It's Stevens looking inward for that universe/God/force to understand what's happening outside and around him, which he's done before on all his previous albums. The difference, here, is that those previous works were so intensely personal, written by him and for him, you'd have to devote hours to decipher his message. (Yes, I've done this.) Here, he's speaking more universally (heh), bookending his personal histories with larger, planetary and mythological, ones.

The message is, then, you will never truly find your place in the world, but you should keep searching even if the search is not not meaningless. Take Stevens' song "John Wayne Gacy Jr." off of his 2005 album, Come On And Feel The Illinoise! Stevens self-identifies himself with the famed serial killer, choosing to find qualities in Gacy he can empathize with. Why? Perhaps to say the capability to do evil exists in all of us—some are just more prone to tap into that potential than others. On "Saturn," Planetarium's lead single, Stevens plays the devil's advocate, bringing discomfort where there is joy, announcing that he is not love nor the face of God before a swell of synths take over as if to say, wait maybe he's playing us. That duality, the ability to recognize your lightness and darkness—and to be aware of it enough to question it—is key.

"There's a sort of beautiful perfect order to life on earth that's so mysterious and so profound," Stevens told NPR. "And yet, as people, we really fuck it up. We're so dysfunctional, and we seek guidance from the exterior world, from the heavens, to help us understand our purpose here and to sort of create a sense of order." Turns out, these heavens and this exterior world exist within us. It's through music like Stevens', especially when experienced live, that we come to understand that.