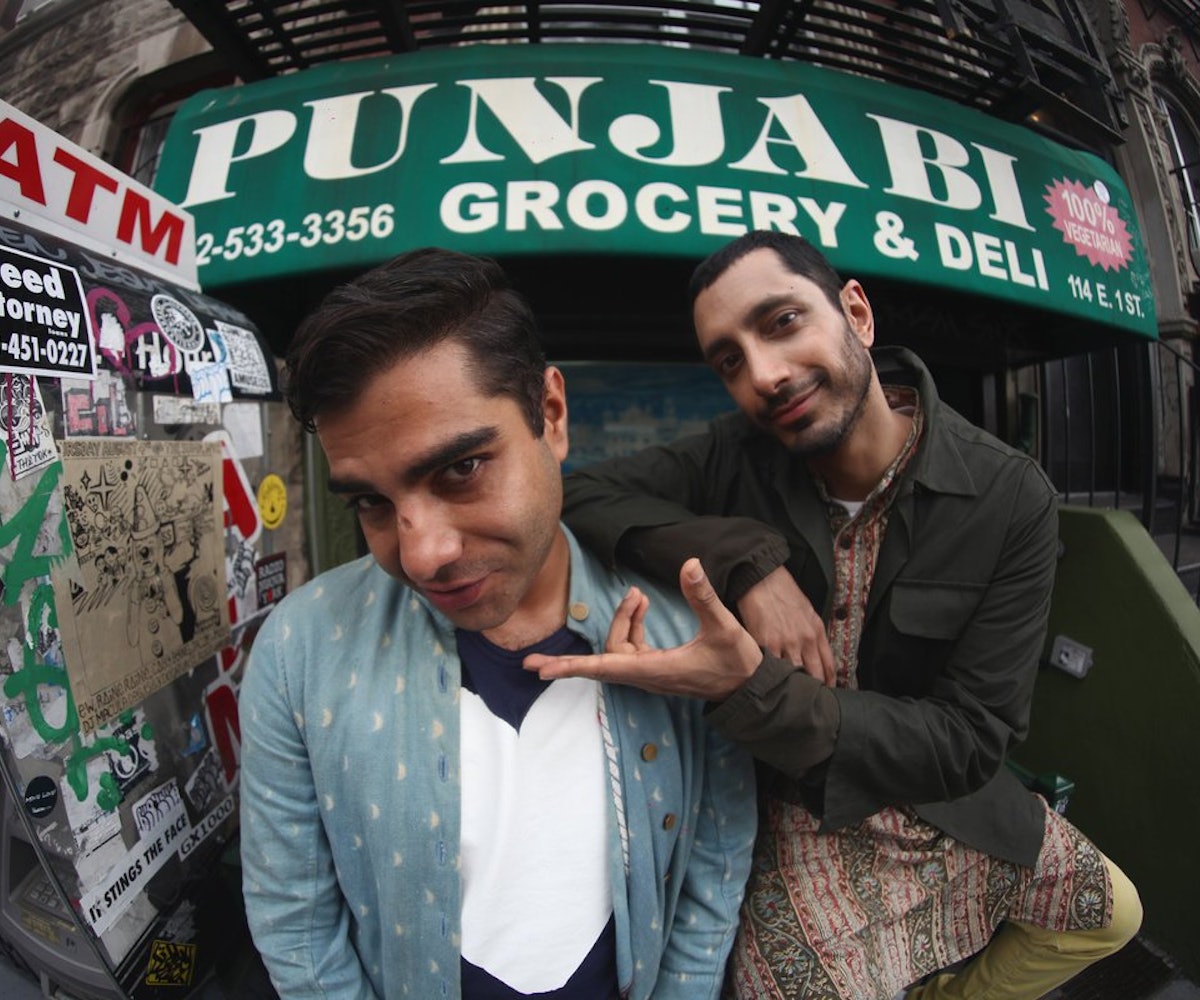 In a time of racist demagoguery and anti-immigrant sentiment, Swet Shop Boys’ music has never been more necessary. The transatlantic duo consists of Queens native Himanshu Suri (formerly of Das Racist) and English actor-slash-rapper Riz Ahmed (from HBO's The Night Of). As Heems and Riz MC, they wittily dissect contemporary injustices from racial profiling to no-fly lists over zingy subcontinental beats, flipping the script on a media culture that has often erased or diminished South Asian experiences. We caught up with the boys ahead of the release of their debut album Cashmere, out now, to discuss shaping their own narratives, coping with prejudice, and becoming bona fide sex symbols.

How did you two initially link up and form Swet Shop Boys?

Heems: It was Riz’s idea. We came across each other’s work on the internet, and then when Riz was shooting the pilot for The Night Of, he reached out to me to kind of walk around Queens, get a feel for the neighborhood, get a feel for the way it’s different in the U.K. than in the U.S. A year later, he had this idea for a project called Swet Shop Boys, and I liked the organic feel of starting with a name as a blueprint and already having this friendship based around being in media, being creative, being South Asian, not being afraid to use our platforms to speak about the concerns of our community. So when he pushed me to do the band, it seemed like a no-brainer. So we did the EP about two years ago while he was shooting here for the show, and recorded the album right before it finally went on air.

What did you find the biggest differences were between your experiences as South Asian guys in the U.K. and the U.S?

Riz MC: We had a lot of differences, but I mean between the communities in the U.S. and the U.K. In the U.S, there’s a lot more professionals, academics, engineers, and doctors, but the U.K. South Asian experience can be a little bit more ghetto and a little bit more working class. The kind of biggest difference we had when we were working is that we’re very different people, even though we’ve got similar backgrounds and have had similar trajectories in life. Our temperaments are different, like, he’s a bit more chilled and laid-back, and I’m a bit more hyper, and you can see that in the flows and in songs, and I think it’s really complementary, like yin and yang.

The album is peppered with an Urdu slang and in-group references. Is this project aimed at your own communities or at a wider audience?

H: There wasn’t really any conscious thought about it, but I think, like, when I try to rap a lot of the experiences, a lot of the words, a lot of the language I use as an artist speak to that experience. So I try to toss in a couple references to that. But I think overall the experience of being an outsider isn’t limited to race or to gender and sexuality and other spheres. Often, I’ve found even though I’m speaking to my specific experience, there’s a lot of overlapping with other people and their specific experiences. So you make this work in a bubble of sorts, but when you put it out there, you find out that it speaks to the human experience, and it’s a validating moment.

On “Zayn Malik,” you describe yourself as a “college dorm room poster.” Have people reached out to you saying they seem themselves in your music?

H: For me, growing up in the ‘80s and ‘90s, there weren’t a lot of South Asian figures in media for me to look up to. I remember, when I was growing up, there was me and Jack, my old bandmate, but a lot of the South Asian people around us weren’t really progressive or didn’t have an interest in the creative arts like we did. But now when I communicate with younger folks, it seems like there are a lot more South Asian progressives and a lot more visibility in media with South Asians contributing to that.

How have you guys been responding on an emotional level to both Brexit and the rise of white ethnonationalism with Trump?

H: This is something that we’ve been talking about, and we’ve been dealing with for a long time. Obviously, after 9/11, it took on a different kind of nature, but if you have brown skin, you wear this skin every day; you’re aware of it, it doesn’t disappear or come according to when it’s more in the zeitgeist. It’s more something that you have to cope with, and so you develop these coping mechanisms from a pretty young age, and they don’t really change in a lot of ways. Humor is definitely one for me, but this is something we have to live with.

So the fact that this album is dropping in 2016 with the current climate is almost irrelevant because it’s been happening to you all your lives.

H: I mean, I’ve been making music since 2009, and race and discrimination seem to be a reoccurring theme.

R: It’s not new. I mean, half of the African slaves that were brought to America were of Muslim background, so that’s like mass violence against Muslims. You know, Black Lives Matter, that’s not new. That’s 400 years old! In the last 15 years, we’ve run into a kind of new narrative about what unites our society is to unite against the brown boogeyman. But none of this stuff is really new, you know, you grow up being confronted by racism or—

R: Yeah, you know, violence. I’ve had to fight against violent racists since I was a kid. This isn’t a new thing, it’s just getting more media spotlight. It’s just part of our reality.

In the U.S., you see very few South Asian sex symbols. What’s striking about this album is how you portray yourselves as players.

R: Yeah, or as the psychopathic terrorist rapist. It’s like you’re either a barbarian or a bitch—and it’s like, "No. I’m a dude, my sexuality is a part of who I am, and I don’t subscribe to that binary." So just kind of talk about yourself as a guy with swag, you know, and talking about girls in a way that’s just normal in itself can a be a bit of a radical act in this strange cultural landscape, and I think it’s an important part of humanizing who we are. Sexuality is such a part of human aspect, so normalizing South Asian sexuality, I think it’s an important thing to do.

Riz, you just starred in The Night Of and now you’re gearing up for the release of Rogue One. Do you feel like this music and this exposure of identity dovetails into the work you’re doing in film, or do you feel like they’re two separate worlds?

R: I don’t know, man. Some people see it as the same thing, and some people see it as different things. I’m just kind of really doing me, and I’ve kind of given up on the idea of trying to form a coherent, curated idea of who I am or what I put out into the world. Consistency is very boring to aspire to. Some people might see that as some kind of contradiction, some people might see it differently. For me, I’m just trying to be me.

Finally, tell me something about Swet Shop Boys that the world doesn’t know.