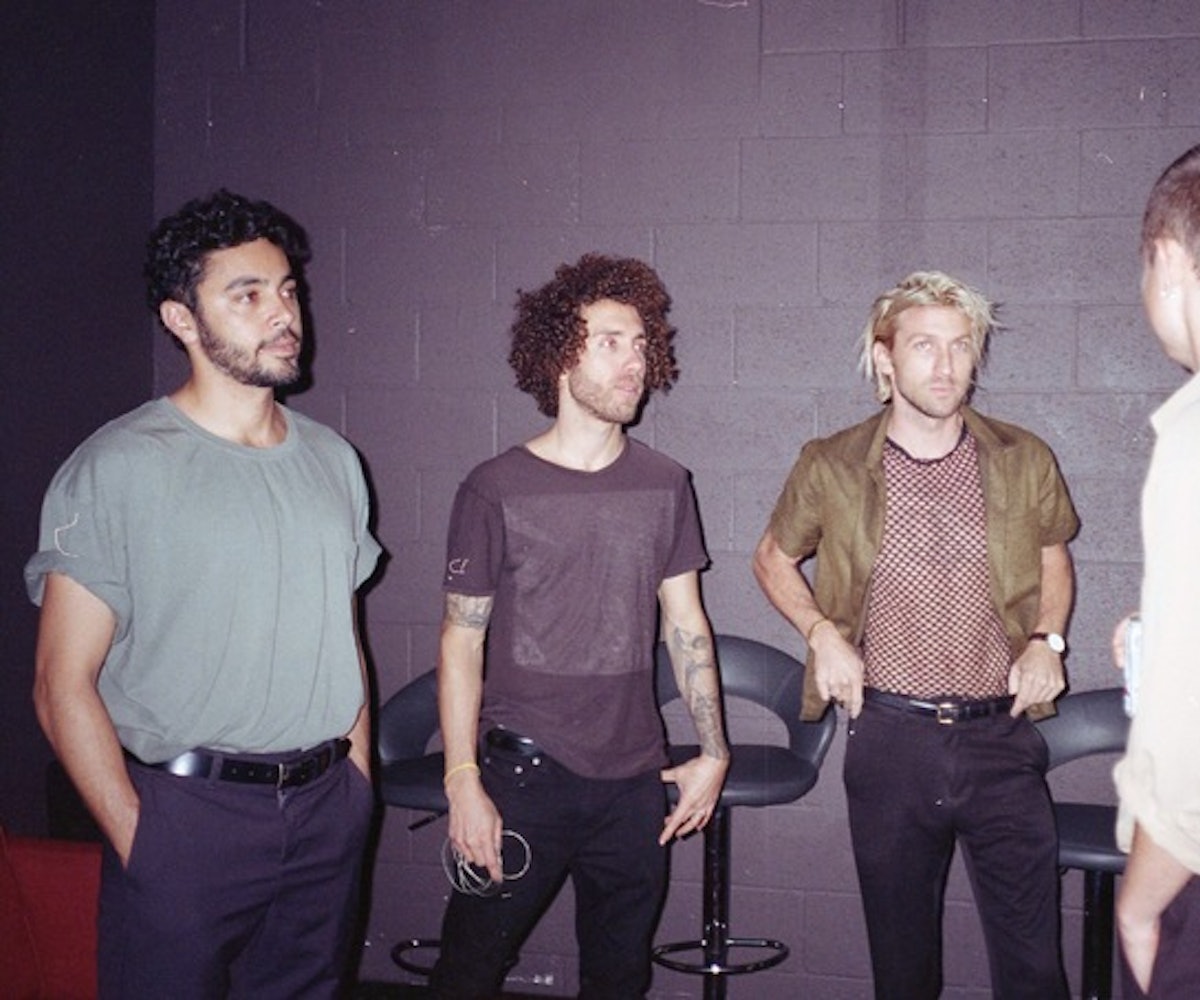 When SWIMM takes the stage at NYC’s Mercury Lounge, the audience appears to be both entranced and curious. Seasoned fans of the psych-pop duo line the front of the stage, while those unfamiliar with the group are piqued with interest, waiting to see what will come from the men who undoubtedly fit the part of L.A.-based indie rockers—or at least look like it. As lead singer, Chris Hess, flips his shaggy blonde hair with each passing track, those in the front can be found dedicatedly singing along, and audience newcomers become instant converts. Soon, all I'm able to see is a sea of heads bobbing to the steady beat.

“I demoed it and then sent it to our manager at the time, and he was like, ‘This is the one that we need to workshop and go through,’ and I was like, ‘God dammit’. So we ended up doing it,” Hess says of the song's lengthy process. “We would work on it for a few days and just be like, ‘Ugh, f--- this song. I hate it.’ It was one that just needed to be frickin’ wrenched out. Now, it’s probably one of my favorites because it means so much and it was worked hard on to get there.”

Stream “Bedrooms,” below, and scroll on to get to know Hess and Winn.

Out of all the songs you’ve written, how did you select the ones that would make it onto your debut album?

Adam Winn: We have a batch of around 30 songs, and we’ve released some here and there. The ones we selected for the album are mostly from the past year and a half. They’re kind of like our babies. We just try to go with something that feels right all together as a whole. Even though the other songs are great, and maybe they’ll come out on something different later on, they’re just a bit of a different direction.

AW: I think what I love most about the artwork is that it makes you question how much importance we, as a society, put on beauty. Chris actually did a whole write-up about the meaning behind the artwork that describes it best.

Your first release from this album was “First Time.” What inspired that song?

CH: The first half is about a thing that I had that was really short-lived but sort of flash-in-a-pan, a romantic thing as summers can bring about—sorry I’m such a fucking dweeb. The second verse is totally about my best friend Devin’s excruciating breakup, which I’ve done before with him because he’s been my best friend since we were 13, so I love taking his life and rolling with it.

The song “Belly” from your Beverly Hells EP is your most played song on SoundCloud by hundreds of thousands of plays. How is that song special to you both?

AW: That was another song that was like “Bedrooms,” in that it took us so long to figure out a version. We reworked that one so many times and finally got it done, and it ended up being one of our most popular songs. The lyrics are cool with that one because it’s also about one of his best friends.

CH: Yeah, each part is about a different person in my life who has let their outstanding potential in whatever they could do get ruined by a vice or an addiction to something. The first verse is about my uncle, and he’s an amazing poet with really great taste, but he has always drunk too much, and his own talent got diluted with that. The second verse is about the same friend from the second line of “First Time,” and it was another one of his breakups. Then the third line is about my other best bud from Florida; he’s been like my brother since we were in first grade. He was in a car accident when we were 18 or 19, and one of our good friends passed away. It kind of triggered anxiety and a path down a really rocky, dark road for him for a long time, and he still struggles with it. Before we actually had released that song, we played it at our hometown show, and he was at that one. I didn’t see him when we were playing, but during that song, he just kind of appeared toward the front row, as I was singing that verse about him, to him, among throngs of drunk-ass people. But we were intensely looking at each other, and that was a pretty amazing moment. It even was like as if he was trying to sing the words, but there’s no way he could have known them. There was some kind of weird connection happening there.

Do your friends know when you’re writing a song about them, or do they get surprised when they hear it?

CH: I don’t know if they usually would know even after unless I told them, but he could tell. He kind of was like, “Is that part about me?” But he was really excited that it was. I usually just tell someone. I don’t have it in me to keep it in.

You’ve been touring across the country. Do any specific shows or cities stand out to you as favorites?

AW: We definitely love playing New York. Other than that, Utah is always a fun time. There’s a town called Provo, and they have all-age venues with drive-ins—no alcohol—and they’ll get packed to the brim. Everyone goes apeshit. It’s like, how is this possible? There’s no booze, they just genuinely love music. It’s really cool to see.

CH: L.A. is great, too. [After living there four years now,] it feels like a hometown show when you see tons of people you know. And we’ve done enough shows in the warehouse that we live in [The Cube], that it’s like its own breed of show now. When we play there, we hang sheets of Mylar and turn it into a space bubble basically. It always has a good vibe because I think people notice the work we put in to transform the space, and it’s positive and loving.

AW: Our hometown in Florida is another one that will always be special, because every time we come back, it’s like a family and friend reunion. Florida’s been really supportive of us. It’s cool to see these people come out and be like, ‘I’m so happy to see you, we follow you guys all the time.’ It’s a beautiful experience. The place we play in our hometown is a cool bar...

CH: [laughs] People just get so drunk in Florida, but it is beautiful because they’re so happy.

You created and headlined a one-day festival in L.A. this past April. How did that idea come about, and what was the experience like?

AW: We wanted to do something different than just a headlined show in L.A. We wanted to curate something special and make it our own. We got a photo booth, decorated the whole place, got a ton of sponsors, booked all the bands ourselves, and got the flyer made. It was just kind of our night, and it was so cool. We actually just booked the second one, Love You Down 2.

What are your favorite songs or albums of the summer?

AW: There’s also a song by them called “Whiteout” on the same album. That’s one of my favorite songs right now. I was kind of late to the game on it, but DAMN., the Kendrick album. There are some songs on there that are so amazing. I think my favorite is “PRIDE.” SZA’s album is also really good. “Drew Barrymore” is probably my favorite song off that one.

CH: Last summer, Anti, Rihanna’s album—the best thing that’s ever been made, ever—was my everything. I just think I’m not ready to let it go. I still go back to that one. Last weekend, I wrote on Instagram, “Tonight I just want to be in a cuddle puddle with all my friends, smiling and crying to ‘Kiss It Better.’” A few hours later, we were all at the house, and that song came on, and I actually grabbed my friends and was like, “Everybody get on the ground.” We were just smiling and cuddle-puddling to “Kiss It Better,” and I was like, this is still it. Two summers in a row. We’ll see if we can make it three.

What are you guys doing when you’re not making music?

AW: We surf some—he surfs more than I do. L.A.’s great for hiking and camping, so we do a good amount of that.

CH: I write a lot. I try to keep a pretty routine update on our blog, and usually, it has nothing to do with making music. It’s essays and stuff like that, non-fiction and anything across the board.

What would you be doing career-wise if you hadn’t pursued music?

AW: I was doing marketing for Nike for a few years, and I actually really enjoyed it. I felt like I was always getting to create something fun. I probably would have kept pursuing that world I think. Music started getting too busy, so I left that.

CH: He’s a real go-getter. He gets shit done. I was putting on art shows in Florida before music started to take over everything.

CH: Yeah, I also worked at Smoothie King. So probably realistically, I would have given up events and just franchised a Smoothie King on the beach. Smoothie Prince.

AW: Probably have more of a tan.

CH: Might have a dreadlock or two. Might’ve had money.