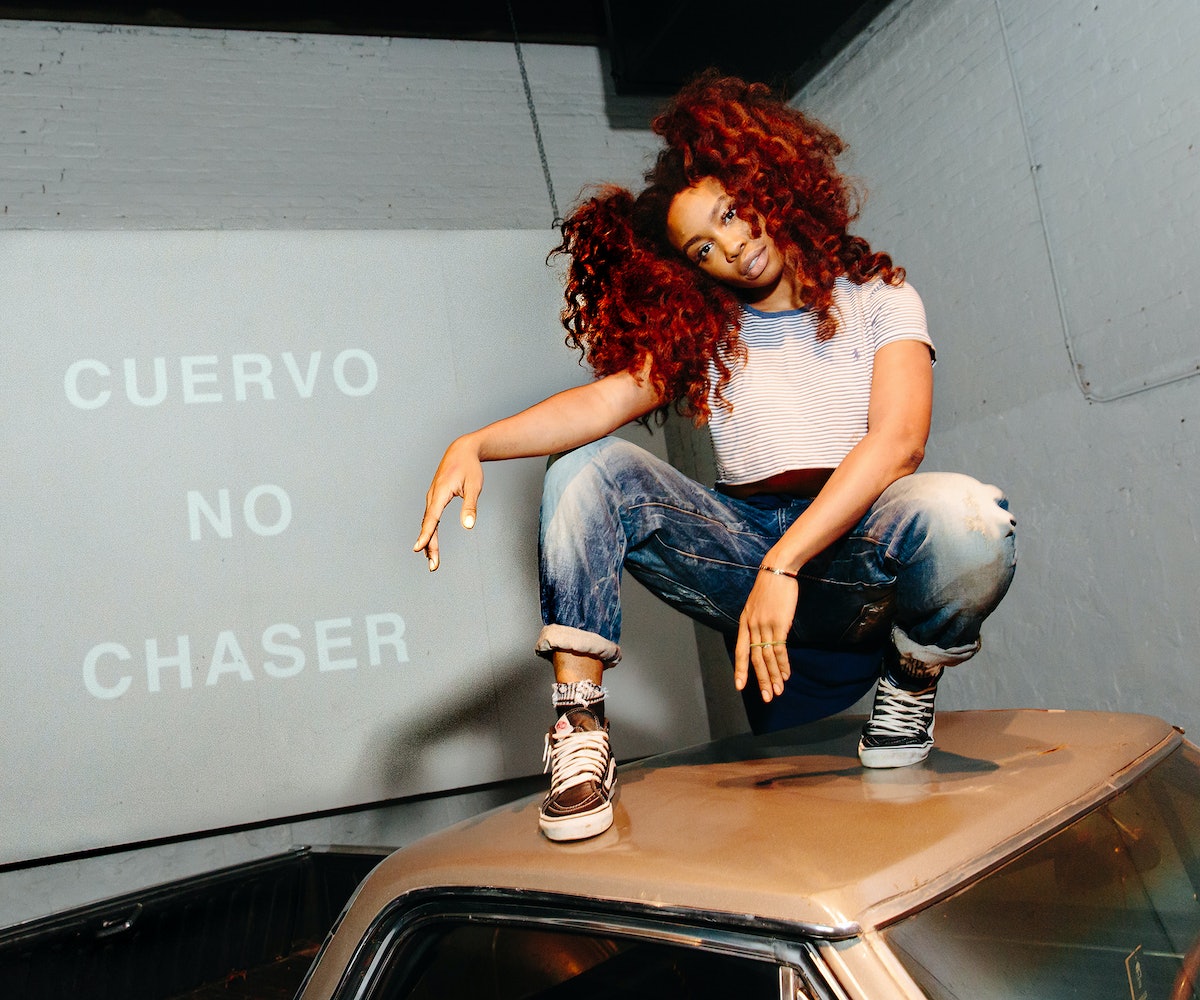 Photographed by Benjamin Lozovsky for BFA.com.

SZA’s not ready to leave the stage. And, frankly, after vibing with the singer for barely a half-hour, the crowd doesn’t want her to go, either.

It’s an abnormally chilly Cinco de Mayo evening in Brooklyn, where hundreds have gathered to celebrate at Jose Cuervo and AfroPunk’s collaborative event, the No Cuervo No Cinco Party. The ambience provides just a taste of the inclusivity that the annual music festival promotes: No sexism, no racism, no homophobia, no fatphobia, and no hatefulness in general. Guests show off gift boxes that read “Cuervo No Chaser,” while others dance to sets by DJ Moma, DJ Kitty Cash, DJ Lindsey, DJ Underdog. When SZA gets on stage, she's the one dancing, occasionally pausing to shout-out familiar faces in the crowd as she performs tracks like “Babylon” and “Child’s Play” (she even did Chance the Rapper’s feature verse), and songs that she’s worked on with other artists, like Rihanna’s “Consideration” and Wale’s “The Need to Know.”

But before our tequila shots could get a chance to sink in, we made sure to catch up with SZA to talk about “Cuervo No Chaser,” Lemonade, and her upcoming album that we’ve been patiently awaiting.

Tell me a bit about what “Cuervo No Chaser” means to you, and how you got involved with tonight’s event.

I’m not a very alcohol-driven person, but it’s the sentiment of being straight up and direct and being yourself. “Cuervo No Chaser”—no additives, no extras. And AfroPunk is like my family. I’m super-grateful that they’d even think of me.

Your vibe is similar to the AfroPunk vibe though, so it’s kind of expected.

I think you’re on your way there. So what are you working on right now?

I’m finishing my album because it’s been forever. I’m sorry it’s taken so long, but it’s almost over, in a good way.

Just what I wanted to hear! Do you have an idea of when it’ll be out?

It’ll be out this summer, for sure.

What can we expect on there, like themes, features?

The theme is definitely “no chaser.” [Laughs] But it’ll be different from my other stuff. I mean, I’m just getting to the point in a way that I needed to, feeling-wise. I used to [do that] with falsetto or reverb. And I just don’t do that anymore. I’m telling more stories for real, for once.

How so? Is that just a matter of getting more specific with your word choice?

Getting direct. It’s not even about specific. It’s about not using metaphors to tell you that I disrespected the shit out of somebody. I’m saying, “Straight up, this is what happened. You may not even know that this happened, but now everybody knows it happened, sorry.” It’s a lot of those moments.

Who are some of the people you’re working with on it?

When you work with other people, your input is so tangible on it—like what you brought to “Consideration,” for example. What was it like working with Rihanna on that?

It was smooth. It was a very smooth, random thing.

How did it come about?

I made the song and she connected with it. She was like, “Bitch, I want this song”—metaphorically, she said “bitch.” It was like a homegirl asking for something, and building with you. We caught a vibe and it just went from there. Low-key, if there’s anybody who I would’ve imagined singing anything of mine that’s aggressive, it would definitely be her because she has a very aggressive tone.

What artists are you listening to now?

Speaking of “Cuervo No Chaser,” what about Lemonade?

Oh my god, that doesn’t count! Everyone’s listening to it. I was at Coachella when it came out, and we had just finished our set. I was like, “We have to go home.” We got home, didn’t have HBO. We were like, “What the hell?” Two days later, we finally saw the whole thing. I was pressed like everybody else to see it. I wanted the whole thing, like, now. Your hair is amazing, by the way.

Yours, too! I wish I had some more to work with, like you do.

So what can we expect next from you?

This album will be out this summer, but in the next 10 days I’ll be dropping something. Several things. But that’s all I can say.