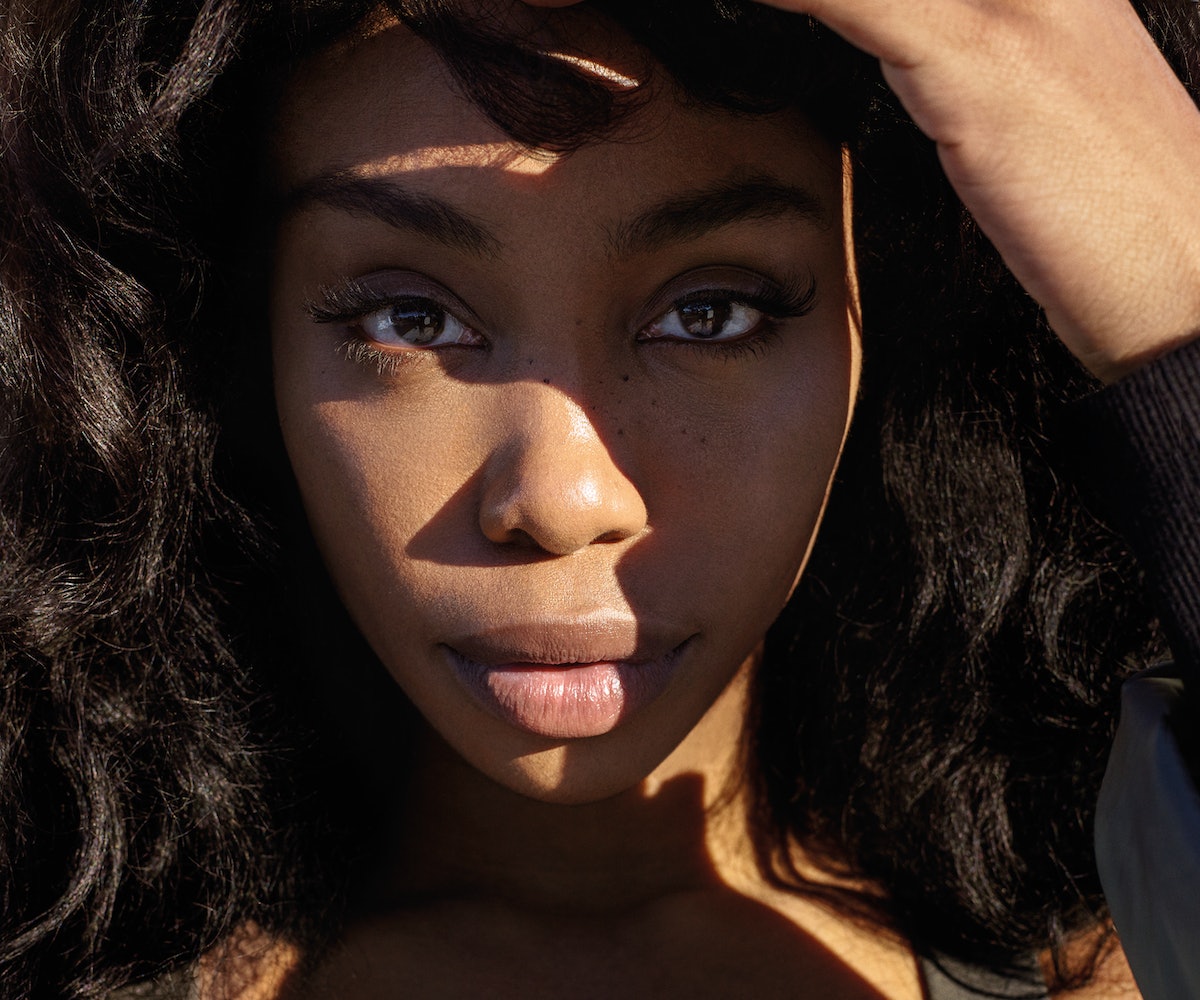 SZA has kept busy since putting out her last album, Z, in 2014. Most notably, she’s teamed up with two of the biggest singers out right now: Rihanna and Beyoncé—a big deal for an artist not yet on their radio level of fame. With Rihanna, she co-wrote and is featured on the opening track for Anti, “Consideration.” With Beyoncé, she stars in the latest campaign for Queen Bee's athleisure line, Ivy Park. In between, she's also whetting fans' appetites by releasing music intermittently, including, most recently, the addictive “Drew Barrymore” off of her upcoming project.

I only know SZA through her music, but her personality is the kind that makes you feel like you grew up next door together. And we kind of, sort of, did. We’re from neighboring towns in northern New Jersey, we’re both in our mid-20s, we both just got privy to the magic of dry brushing, and we both have unforgiving schedules that force us to reschedule plans (in her case, interviews) more often than we’d like. Yeah, SZA’s kept busy.

We recently chatted with the singer about Ivy Park, her food habits, where her “park” is, and, of course, about her new music. Read what she had to say about it all in the interview ahead.

How did the collaboration with Ivy Park come about?

I have no idea. She just asked me, and I showed up.

And when Beyoncé comes calling, you don't say no.

In terms of the clothes, I feel like you've always been a cozy girl. You wear comfortable, often oversized clothing. What are your thoughts on athleisure becoming mainstream now?

I think it's an amazing thing; everyone should be comfortable. It just works out for me because I've been dressing the same way forever. So I'm just happy that I'm on time. But I hope it's not a fad. I hope it's really something that people appreciate. Like the joy of people being comfortable is crazy.

In past interviews, you've opened up about falling ill when you were younger. Do you pay particular attention to your health now because of that scare?

Yeah, that was actually not that long ago. I was already maybe 21 or 22. I definitely think my health has never been the same since then. I basically have to take really good care of myself… If I eat after 9pm, I hurt. Or anything after 7:30pm really—I feel it in the morning, and my back hurts. I can't get up; it's bad. But I feel like God probably just gave me a super-sensitive body because if it wasn't for that, I probably wouldn’t have stopped.

I was eating double bacon cheeseburgers with extra cheese, and cheese steak with extra steak, and fucking anything else that I could drizzle, dip, and stuff into my mouth. I love food, so having a lot of food allergies now and just having a really sensitive body, it forces me to be very mindful and conscious and eat when I'm hungry, not just when I'm bored and just really slow down. Everything in moderation.

Do you have major food restrictions?

I have a really strong gluten allergy, and I'm pretty lactose-intolerant, like in a big way, but I love cheese. Most people that have a gluten allergy also have a dairy allergy 'cause they kind of go hand-in-hand. I drink a lot of water. Sugar makes me feel crazy—like makes my body hurt kind of a thing. I don't really eat fruit because it has a lot of sugar. I try not to eat a lot of red meat, but every now and again, I feel like I need iron or something—something that I'm missing. But, like I said, I try not to eat after like eight o'clock. Last night, after the show, I ate at one [in the morning], and I feel terrible right now. But it was delicious!

It always feels good in the moment. So are you mostly eating vegetable nowadays?

It's a lot of meat and vegetables; Paleo kind of. I like sweet potatoes, 'cause I love carbs, but most of them hurt me. White potatoes hurt me, too, so I figure sweet potato on everything is my way to live that.

In terms of physical activity, I know you use to be very serious about gymnastics, why did you end up stopping?

I just started caring about boys and other things. I think, before, I was very compelled by mystery, and I'm motivated by curiosity, and seeing how far things can go. But one does have to weigh in probability. And if I can't win, then I don't play. I knew I couldn't go to the Olympics. I knew that if I did go to college, I would have to take it really seriously, but then it wouldn't be the level of serious that I really want, so it'd be just like taking gymnastics really seriously for leisure. But gymnastics was more than leisure to me. It was like the way I feel about music. I was very connected to it, to the growth. Learning new skills, being in the theater that I have in my body. It's a very cool exercise to freak yourself out and then mind-over-matter yourself. But, once I got distracted with other things, mind over matter became super boring. I was like, "Yeah, let's do dumb shit, let's find boys."

Have you ever thought about picking it back up at all?

Yes, because I loved to do gymnastics. I go to Sky Zone just to tumble for a little and bounce around. Or even if I’m in a large room with, like, not that many tables, I’ll start doing handstands or something. It feels good to my body, I can't explain it.

So, outside of gymnastic, are there other kind of workouts that you enjoy?

I don't work out, but I do like to move; I love to hike a lot, I love to swim, I love to rock climb. Anything that involves an adventure.

For some, working out can act as a form of therapy. Do you have any self-care actions that you take when you just need a break?

I think meditation is probably the strongest self-care method around, personally. Just because it deals with the brain and your energy and that's where everything else comes from. And then probably dry brushing. Random, but it feels really good and clears the lymph system, which is, like, the only part of your body that doesn't cleanse itself.

Beyoncé talks about her “park,” a place that she goes to decompress. Do you have your own “park” where you like to escape to?

I'm constantly looking for an escape. I went to Hawaii for the first time and did a lot of hiking, a lot of swimming in open water…. I love finding places to get lost in. My old get lost place use to be Tulum.

Anytime I go anywhere, even though I'm poor, I just look on the map and see how far we are from a great area of water. And then we drive toward it. One time, we went to San Diego, or was it San Francisco? And she—my Uber drive—drove us all the way to seal beach. She was like, "Hey, I know one of the people that help the seals." I grabbed my whole band, and we took a two-hour drive to the coast to go find elephant seals and run on the beach and move around. I think it's very important to have tenacity about your park. Wherever that is for you. Just chase that feeling.

I have to ask, when can we expect the new album?

I don't know if I'm supposed to tell you that, but it's supposed to be, like, ridiculously soon.

You’ve said that, for your past projects, you didn't necessarily know how to make an album. What have you learned about the process of making music since your last one?

I would say, mostly, it has to do with the way it sounds to you. You really have to be clear in your head about what you want or what you hear and then, after you're clear, don’t be afraid to try and change it. Me accepting that I didn't know anything was very freeing. It allowed me to take chances and just do other stuff. When I think I know everything, I'm not even clear on what it is I don't know. I was sticking to a very rigid idea of what I thought I was supposed to be, instead of just trying to maximize a feeling or maximize a moment in my mind.

The songs on your new album are going to be named after actresses. What are some of your favorite movies?

Six Degrees of Separation, which I just watched last night. I like different movies for different reasons. Scarface for the hair, Blow for Penélope's hair, every Spike Lee film literally, just because the cinematography is so good and it's so brilliant, and the scoring. I feel like I've watched Godfather with my dad a billion times. I love that movie... Eyes Wide Shut, I love that, too.

And which actresses can we expect to make an appearance on your track list?

I don't know, I don't know. There are some more appearances, I will say that.