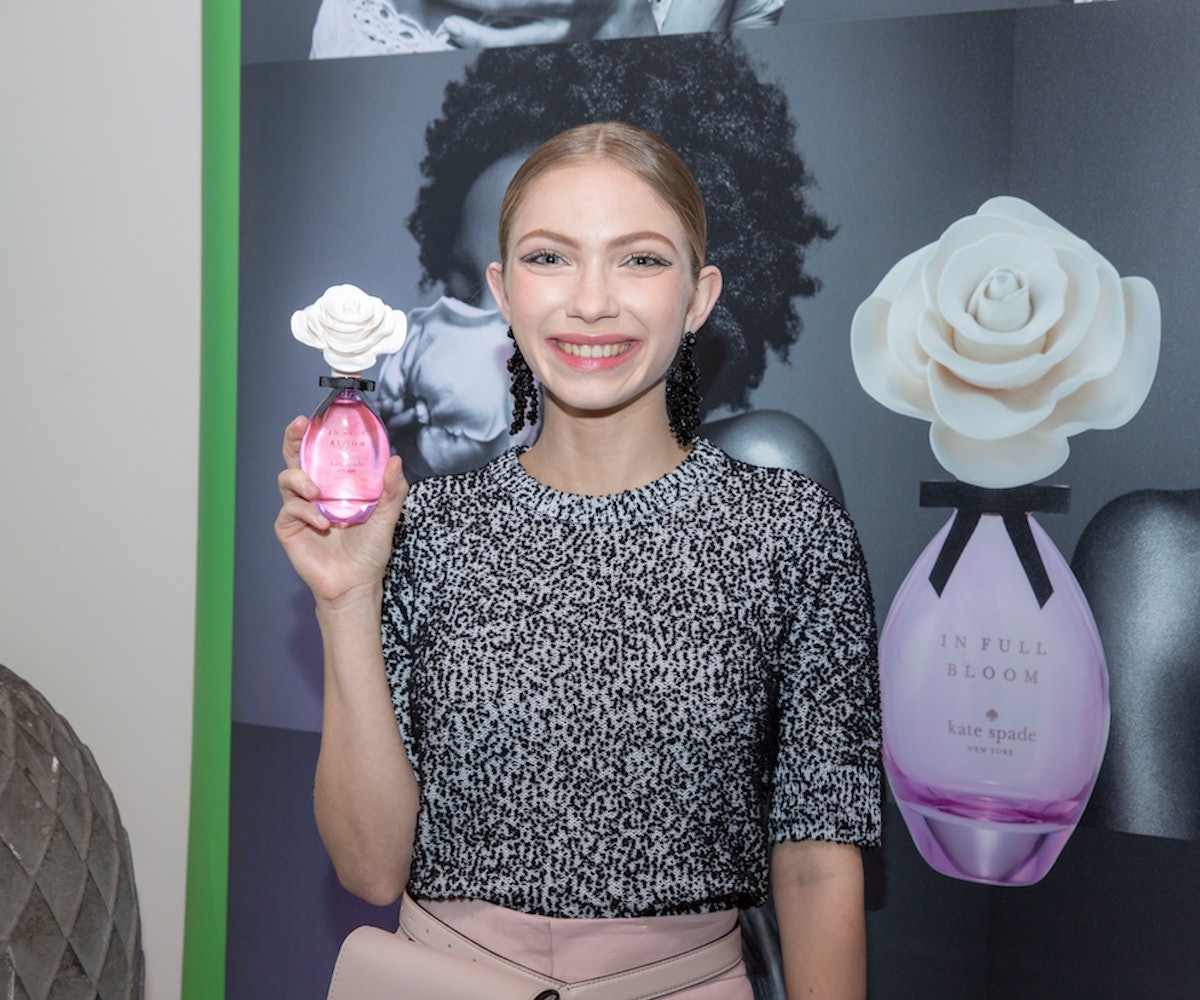 Although spring is officially only a couple days away, New York City is still permeated with a wintery chill, the kind that makes it hard to believe that flowers will ever bloom here again. So it felt a little bit cognitively dissonant to spend a recent night on the Terrace of the Gramercy Park Hotel, surrounded by the lightly wafting scent of roses and peach. It felt like spring up there, like things were on the verge of opening. This feeling was assisted in no small part by the presence of bottles of Kate Spade's newest perfume, In Full Bloom, which was, of course, responsible for the rose-peach scent in the air, but which also comes in an impressive bottle: a curved (it fits perfectly in the hand) lilac glass container topped with a black bow and a blooming white ceramic nose perched on its top. This is the first fragrance Kate Spade has launched in the last three years, and the campaign is fronted by Laura Dern, Sasheer Zamata, and Tavi Gevinson, all of whom made charming videos offering themselves a bit of life advice.

At the fragrance launch, I spoke with Gevinson, who is the founder of Rookie as well as an accomplished actress, about the fragrance, what scents she absolutely hates, and how her friend Lorde feels about perfume. Read all about it, below.

What role does fragrance play in your life?

I discovered fragrance maybe more recently, because I thought of myself as a lowly suburban bumpkin who had no reason to wear it until I moved to New York. My friend, Ella, who goes by Lorde, put it so well, though, and said, "Well, with [fragrance], you can tell... the scent can tell a story." And I was like, "Oh! It's this whole other sense, it's a different element of your style, but it's invisible." And that made me really excited. I let myself choose a new one every few months or every year, and I like it because it adds kind of an essence, but it speaks to different senses. I'm just used to dealing with the visual aspect of my personal style. I like that it's 4-D, kind of.

That's a nice way to think about it, how it's really your own because everyone's skin has a different reaction to every scent.

What does In Full Bloom make you feel? Why do you like it?

Everything I go for fragrance-wise is pretty floral. And the concept for the campaign and what we'd be talking about in the videos really resonated with me. I've been writing about how to like yourself, how to love yourself, how to be confident, and what it means to actually evolve and grow in a real way since I started writing, so I think that my audience and Rookie's audience are constantly looking for answers to those questions. I was really drawn to it aesthetically, and then when I learned about the concept, I was like, Oh, I can talk about it easy.

The name of and the fragrance itself are very evocative of things coming to life and springing into action. What things in your life are coming into bloom?

I feel like I'm working on a few very different slow burns, and I cannot wait for them to bloom. Two of them are writing projects. It's rewarding creatively to break down the expression, which you think of as this big catharsis into a very boring daily, like, "Write this chapter, figure out this scene." So I'm trying to appreciate all the little revelations you can have along the way before things come to fruition.

What are your favorite scents that have nothing to do with perfume?

Fresh linens. Love that. Different people have smells, and I have different friends who I'm really happy to hug and smell their hair. That's probably number one. But then there's also, sometimes I will get whiffs of my grandparents' apartment, and I never know quite what it is, but it's honestly a combination of concrete and smoking indoors, because that's who they were. This is not an uncommon thing—it's not like it's never been written about—but just to get that whiff when you're walking by a place, it's crazy.

What smells do you absolutely hate?

When a scented candle is supposed to be a dessert, it really throws me off. I don't know if there's anything wrong with it, but the combination of taste and scent makes me uncomfortable. Because it makes you hungry, but not to eat anything.

'In Full Bloom' is available for purchase now at Kate Spade.