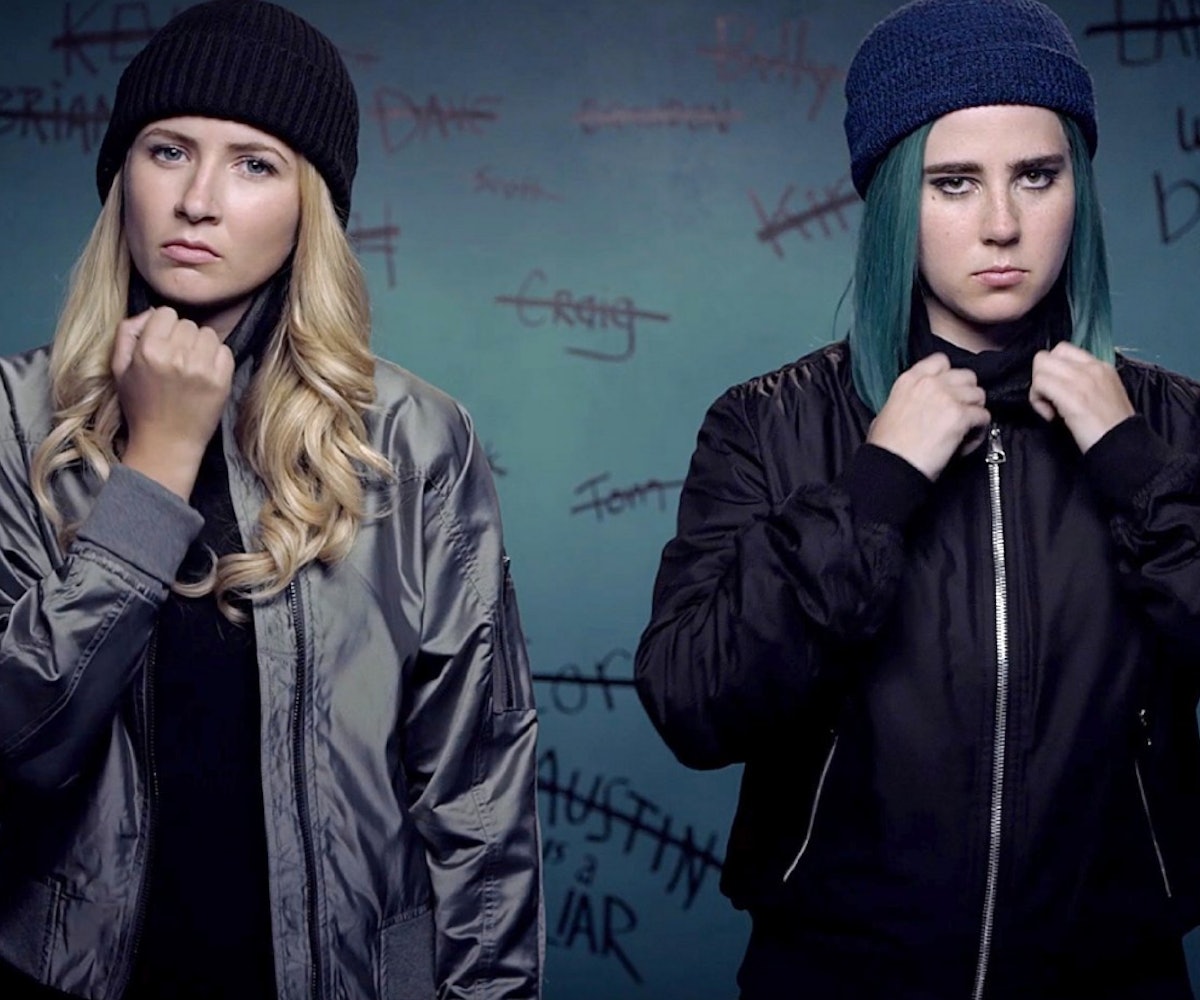 On the surface, Sweet/Vicious looks like any other MTV show: A glossy and briskly paced dramedy set on a made-for-TV college campus, featuring characters who speak in clever one-liners. But in the pilot episode’s very first scene—in which a masked intruder accuses a vanilla frat boy of rape, makes him admit guilt, and then stabs him in the thigh—it becomes clear that the latest scripted series from the former music network is dealing with some pretty heavy subject matter.

We soon find out that the masked avenger is actually Jules (Eliza Bennett), a sorority girl by day and a vigilante by night who targets the perpetrators of campus sexual assault. Eventually, Jules meets the wisecracking, pot-smoking computer hacker Ophelia—played by Taylor Dearden—who, inspired by Jules’ mission, decides to join her on her crusade. The result is a pseudo-superhero fantasy that deftly balances comedy and action with the weightiness of sexual assault and the trauma left in its wake. Dearden, a 23-year-old USC grad (whose father happens to be Bryan Cranston), credits the show’s creator Jennifer Kaytin Robinson for nailing the successful juggling act and for not shying away from such difficult territory. Here, Dearden talks about why young women have been let down by the system that is supposed to protect them, how she thinks survivors of sexual assault might react to the show, and why there is nothing more painful than women attacking other women.

Why do you think the show succeeds?

It’s a show about women written by women, and you can tell it’s from a place of knowledge and sympathy and empathy and excitement, or the fight to do the right thing, as opposed to, "Oh, this is timely so let’s write this." And it really does show. Our creator/writer Jennifer Kaitlyn Robinson is ridiculously young.

How old is she?

She’s 28, so it feels like a show written by someone in their 20s because it is; and it’s written by a woman because, as shitty as it is, we do have to deal with, to a degree, sexual harassment every day. Whenever I watch something that a man wrote about sexual assault or harassment in any degree, there’s this horrible feeling of... I don’t want to say complacency, but for women, this is something that happens to us constantly.

Your characters are wary of campus security and local authorities. Does that sentiment ring true to you? Do you think women on college campuses are somehow being let down by the people that are supposed to protect them?

There’s an unfortunate pattern, and it’s disgusting and horrible. We’re raised thinking that the authority figures are going to help us, and the truth is that we are more often than not let down, especially on college campuses, but also just by the legal system. The backlog of rape kits is unconscionable—it’s insane, and only the wealthier states can afford to get them processed in time, so your statute of limitations can run up before it’s even tested, and it feels like the whole system is against us at the moment. It’s the same thing with racial profiling. Brandon Michael Smith, who plays my best friend on the show, just gets randomly harassed by cops and it’s not done in a way where it’s really intense. It’s more casual. It happens all the time, and it’s horrible and it shouldn’t be this lightly passed over thing.

Were you knowledgeable about this topic before you joined the show?

Yeah, I was. I am a woman and I’m young, so naturally that topic is discussed a lot, because I honestly don’t know a single friend of mine who hasn’t been harassed sexually. I also went to a big school, so I know the unfortunate truth that the system can let you down. While I was at school, there were a few on-campus cases that came up—and even after I graduated, within the last year—that were very disturbing cases.

What school did you go to?

USC. So yeah, I understand the frustration. If you think about it, rape is the worst violent crime you could ever live through, and it’s the only one that there is doubt. No one who was beaten up and robbed is told, "But were you drunk or in a small skirt? Maybe you just regret what happened." It’s the only crime where there’s ever any backlash like that, and, in all honesty, with the amount of insurance fraud that’s out there, that should be a question asked a lot more for burglaries, but it’s just rape—it’s just sexual assault—where it is even a topic, and I’m sick of it.

Are you worried that the show advocates violence as a way of fighting back, or should it just be taken as fantasy?

I was definitely nervous about that. It’s funny, because I don’t know if anyone else was, but I was, because you hear so much that violent video games caused this kid to do this crime. Our showrunners Jennifer Kaitlyn Robinson and Amanda Lasher did such a good job in toeing the line between fantasy and not glorifying it. It’s more, like, this is a cool thing that no one should do. And I hope that the intention is clear, that it’s a superhero story—we’re not stopping cars and lifting them up, but it’s a more realistic topic than superhero stuff is—so it does toe a line.

How do you expect victims of sexual assault to react to this show?

Well, we only hope that survivors see this as a positive message of, "We’re willing to fight for you," as opposed to fighting violence with violence, which is never a good thing in real life. Hopefully, it comes off that way. I was worried at first, but when I started watching the episodes I was like, "It’s kind of like a fantastic diary entry." It should feel that way, or at least it does for me. It feels like a release of some sort because the biggest thing for survivors is lack of recognition, I feel. The amount of doubt and the amount of people saying they don’t believe you and “you’re a whore” and “you’re at doubt here” or "you’re drunk"—we have a show that literally says Fuck that noise, we totally believe you and you’re brave and we’re here, so let’s stop making it something that we barely talk about and let’s start treating it like the violent act that it is.

Given the results of last week’s election and a lot of women suddenly feeling unsafe, do you think your show has new resonance?

I absolutely think so, and there have been some people that are asking, Is it because of Brock Turner that this was written? And it’s like well, one, this was written way before that, and also it’s not one case, it’s so many. And the truth is, with the election results, I’m terrified. There are a few people I know that aren’t terrified, but they understand because they’re like, "I’m a straight white man and I’m not terrified, but I’m terrified for you."

Your shows also depicts women being cruel to other women. Is that something you’ve experienced?

Oh, yeah. You’re a very blessed person if you have not experienced that kind of aggressive hazing and bullying. What Jennifer originally told us after we only had the pilot—we had our table read, and she gave us an amazing book by Jon Krakauer called Missoula which I highly suggest—but she said this is just a show about avenging injustices in general. In episode four, we deal with a sorority that is horrible. There’s this weird thing—and I was talking to some of my female castmates about it too—after watching the episode we were all more quiet than usual, and there’s something really, I don’t know why, but this one is almost horrendous because it feels like a total betrayal of your own sex. We deal with enough from the opposite sex. It felt really heavy for all of us and none of us expected it going into the episode. We discussed it, and it felt like betrayal—gigantic, Shakespearean betrayal.

My college experience was actually amazing. I was GDI, which in Greek life stands for God Damn Independent, so I didn’t belong to a sorority. All of my friends were in sororities and some of my guy friends were in frats. It’s a weird system. I did rush, not because I wanted to join but because I wanted to see it and experience that, which is one of the most bizarre things ever—but nothing but nice. And that’s what I loved also about the sorority that Jules belongs to in the show, because it is just a bunch of ultra-loving, sweet people who are all about empowerment, and it felt completely against the trope you always see. Obviously, some sororities definitely fall within that [other] category, but then others are about just hanging out in some bean bag chairs with some pizza.