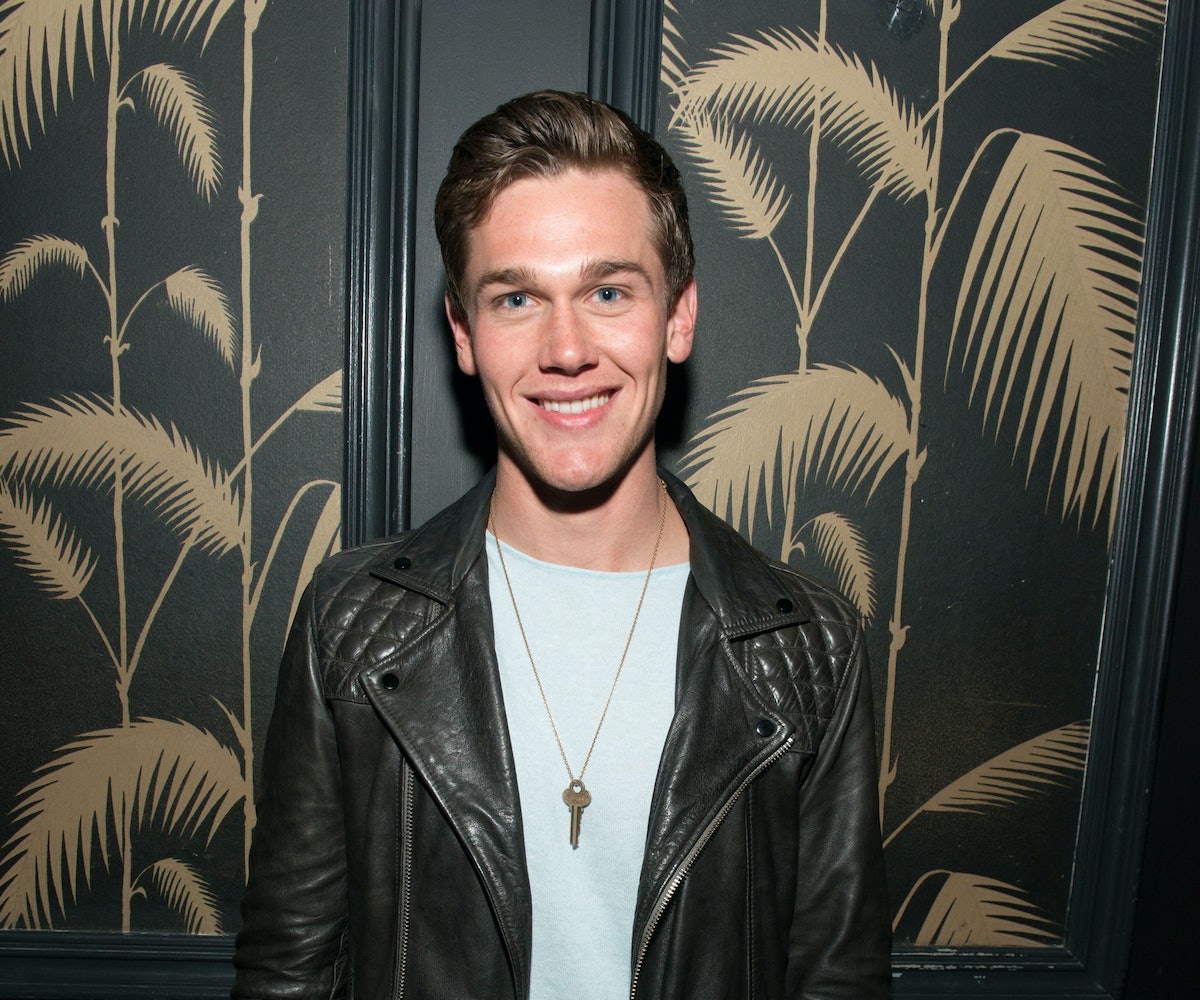 Every high school sports movie calls to mind a few tropes: teamwork, winning, and, for anyone who’s seen High School Musical, a battle between sports and some other, “realer” passion. Wolves, an indie drama that premiered last week at the Tribeca film festival, chucks all of that out the window. The film turns over a darker side of being a teenage athlete in NYC, starring breakout Taylor John Smith as the basketball star who struggles to focus under financial woes and an abusive, alcoholic father.

This seamy realism is a thread for the talented and handsome Taylor John Smith, whose résumé most recently boasts such complex roles as Bash Casey, the son of the notorious Sebastian on the upcoming Cruel Intentions TV reboot, and the troubled lead in You Get Me, a reprise of 1987’s Fatal Attraction. In other words, you’ll be seeing a lot of him very soon.

“The roles are super sexy, dark, and edgy,” Smith says about each of his jobs post-Wolves. “They definitely push a lot of boundaries.” With so many juicy projects on the horizon, we’re guessing this actor will be breaking down walls of his own, as well. We spoke with Taylor John Smith about basketball training, turning 21, and his newfound fame.

What drew you to such an emotionally intense role?

Well, I grew up in Virginia and moved out to California when I was 13. I have a single mom, and I think that I saw a lot of the struggles of my life connected to Anthony’s struggles growing up. It kind of just made sense, because I could really see a part of myself within him, darkness and all. I felt like there was a lot of truth and honesty I could bring to it.

Were there any specific parallels between your own life and Anthony’s?

He’s trying to become a man, and I’m still growing up and trying to figure that out, too. In general, I just connected with Anthony on a deeper level. I understood him. On that journey with him, a big thing I realized is that doing the right thing doesn’t always feel good. The more good I try to do, the harder it feels. I’ve become okay with it, but it’s really tough. I kind of learned that through Anthony.

Did you play basketball before the film?

I can throw dirty socks into a laundry basket. I’m really good at tossing paper and random stuff into wastebaskets and saying “Kobe.” That’s about it. I didn’t play basketball at all before, and at the second audition, the director asked me how extensive my basketball experience was. “Did you start as a freshman on varsity? How long have you been playing on a team?” He thought I was going to be, like, really good. But, of course, like any good actor, you lie through your teeth immediately and then you run home and buy a basketball and shoot until you can’t see anymore.

So how did you end up training for such a physical role?

I got a call two days later saying they wanted to see footage of me shooting a basketball. I went to the basketball court and set up my iPhone on the bench and just shot. Of course, I edited it so I didn’t include any of the ones I missed—it was just shot after shot after shot. Then he was like, “Your form is horrible, you obviously lied. But I like your work ethic. I’ll give you another month, and let’s see some progress.” I didn’t have much money at the time, and I was going to community college. I hired a trainer and would drive down to Marina del Rey, which is an hour and a half from where I live, four or five times a week to work out for two hours and then drive home. It was a lot of money and a lot of time and a lot of energy for something that wasn’t promised.

Is that common for an actor, to lie about your abilities for a role?

Yes. It’d be nice to have somebody who can act and do the thing that their character is supposed to do really well, but it usually doesn’t happen. You get extra points if you can do both, so you just say you can. Eventually, you learn. Maybe that’s bad advice… Don’t lie, everyone.

This was entirely filmed in New York, but you’re about to jet back to L.A. for your next project. Do you feel a difference shooting in the two locations?

There is so much more energy and life and culture and excitement about New York. L.A. is fantastic; it’s beautiful, and there are amazing crews and casts. But I come here and wake up for a 5am call time, and I’m okay about it. I’m just so pumped to be up because everybody else is, too.

What excites you about You Get Me?

It’s just crazy. It’s our millennium version of Fatal Attraction, where I play Michael Douglas’ character. On a weekend break, I cheat on my girlfriend with Bella [Thorne], and she turns out to be... not so normal. It’s a living nightmare for my character, but I’m super, super excited to get started on that.

Cruel Intentions is going to be huge. Was it a crazy casting process?

I originally auditioned on a Thursday, and I refused to watch the original beforehand. I knew the background, but I didn’t want to see the film because my character has no idea about his real father and that whole insane lifestyle. When his supposed real dad dies in a car accident, he finds his [Sebastian Belmont’s] journal. He runs away from home, heads to San Francisco for answers, and tries to figure out who he really is. So the new and old characters are separate. But everyone at the audition was playing the original suave, sexy Sebastian, and that’s not who the new character is. The new character is a charming farmhand from Kansas! I guess I stood out in that way, because the director was like, “What are you doing the rest of the day?” He told me to cancel my other auditions and come straight to NBC for screen tests. We just wrapped filming, and I feel so, so good about it.

Things are all blowing up for you at once. How are you celebrating?

I think the hardest part is just slowing down and enjoying it. I have to be present. My head is so all over the place usually. But coming to New York is so enjoyable for me, it’s like a little celebration, even if I’m basically working all the time.