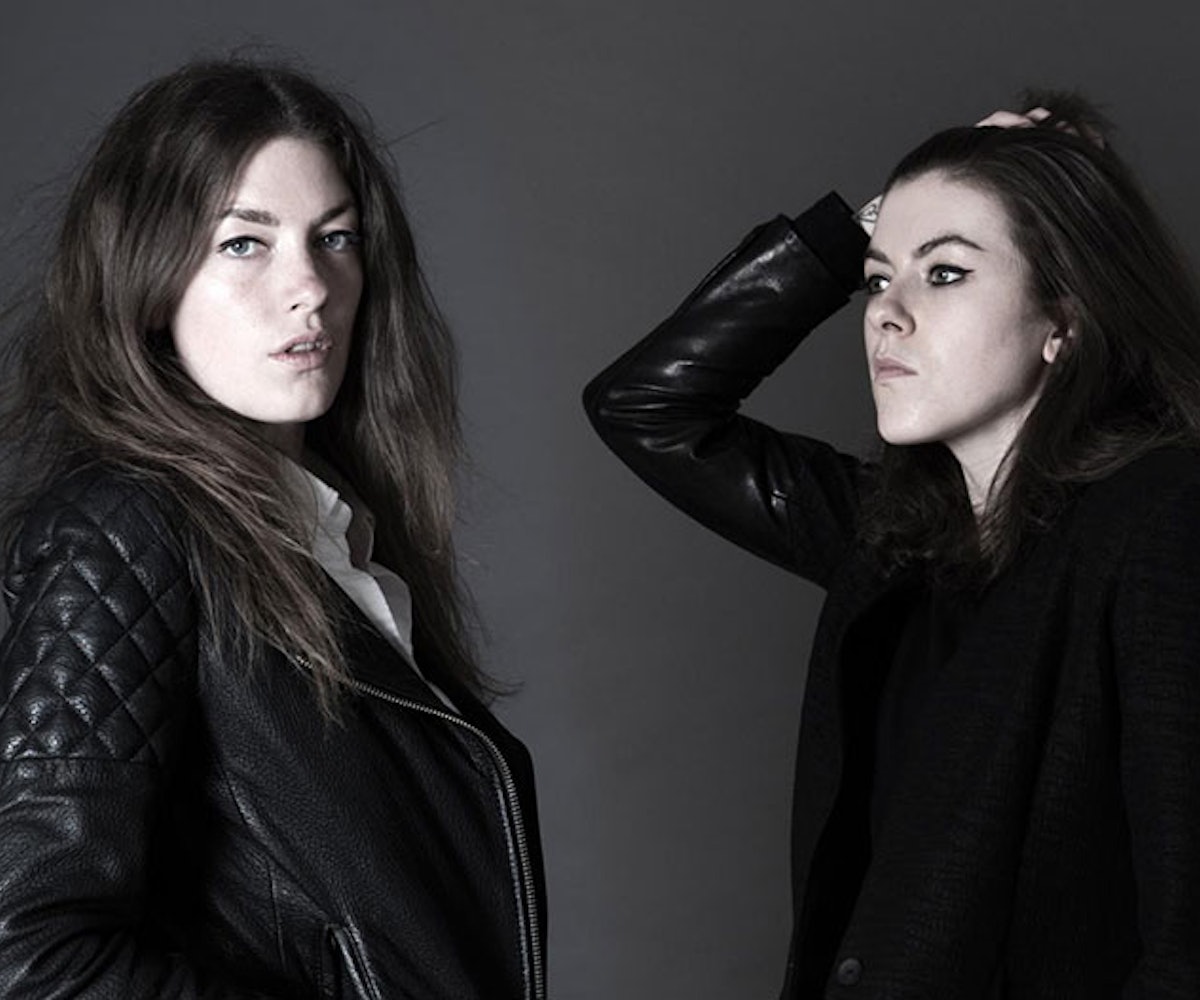 In a music scene ravaged by boom-claps and teenyboppers trying to be adults, the Thurlow sisters are a breath of fresh air. Or, perhaps they’re more like the first gin & tonic of summer: cool, crisp, and bitingly refreshing. Colette and Hannah Thurlow, the women behind 2:54, make rock music that’s a full-on sensory experience. Their latest album, The Other I, has a polished grit to it that’s intimidatingly smart. We got a chance to pick their brains at Dr. Martens’ SXSW #STANDFORSOMETHING showcase in Austin and we can attest to that. These girls know what they’re talking about and have found the platform to express it. Just don’t go searching for that feminist anthem you’d expect female rockers to pen. The very act of them rocking out is feminist in and of itself.

You based your name off a Melvins song, right? What about that song struck a chord?

COLETTE: Yes, but I guess with the name 2:54, it's arbitrary what band or song it's actually referencing. The idea is behind the detail. There's a phrase, "The devil's in the details."

COLETTE: It's a riff off that! "The devil's in the details" is the idea behind the band. Moments that move us in song, like The Melvins' track "A History of Bad Men" in particular has a specific part where the bass drops out and everything comes flooding back in. It sounds beautiful to our ears.

As sisters, how do you influence each other?

HANNAH: It's very intuitive working together. We don't really say much. It's very inspiring working with one another. We know when something's right.

COLETTE: Essentially, we're inspired by each other. It's a natural synergy that comes from having experimented and explored playing music through our childhood. Having adventures hasn't stopped. It's progressed into this.

Was there a certain moment where you both realized this is what you wanted to be doing?

HANNAH: I think we realized early on in our bedrooms writing and singing along to songs together that we shared a passion. It just evolved.

Have you faced any sort of difficulty catching American audience's attention?

COLETTE: Actually, the positivity and energy of American audiences has been surprising. It's really different. It's a great thing to feed off of. That's been a resounding experience here; it just feels  lively and vibrant and positive.

How is that different from the U.K.?

HANNAH: It depends on the night and crowd, but it's been really positive here.

What do you mean by "self-conscious crowds?"

COLETTE: I mean the arms-crossed-self-aware audience.

That might be because of social media and the constant possibility you're being photographed at all times. Do you ever feel like you're playing to people's cameras?

COLETTE: I've actually started seeing people not using their phones in gigs. When we were starting out, it seemed so prevalent for people to have their cameras out during a show. But, I think there's been a general wave of people wanting an immersive experience at shows and wanting to be a part of something unique, live — something they're not going to get again. They don't want to spend their whole time recording it, which is obviously ideal for us. That's what it's about. You should be there to see the show and look at it!

HANNAH: We played a London show recently, and it was just really exciting. No one was really filming. Everyone felt like they were in the moment together. It was a really energetic crowd.

What's the 2:54 experience you're creating, then?

COLETTE: We grew up going to shows, so I suppose we want there to be a feeling of solidarity. Like the concerts we'd go to as kids, we want to create a space that makes people feel apart of something. I would love it if the atmosphere of our shows could draw people in and draw people together. That would be a beautiful thing.

As female musicians—especially rockers—do you feel like there's a pressure to write a feminist anthem?

COLETTE: I think we just think about playing music and being in a band; not thinking about being female musicians. Or, feeling like there should be any agenda. I think us simply existing, progressing, and developing as a band is feminism in itself.

Can you speak to what Kanye West was saying at the Grammys: how the music industry isn't respecting artistry?

COLETTE: It's getting harder to monetize art. That's the problem. People aren't making money in the same way they used to. It puts a lot of pressure on making it. Most bands are doing full-time work, and having two lives — which is normal. It's the way it's always been. Keeping bands alive, the idea of a band having a career; those things are distant now.

Well, yeah. Albums are becoming a thing of the past. Now, everyone is putting out singles rather than conceptualizing a body of work.

COLETTE: Yeah! People are so obsessed with the roulette of the Internet. There's that and there's music.

HANNAH: We're going to finish up this tour and have a couple festivals over the summer, but then it's back to writing and get cracking on the third album.

Are you writing on the road?

HANNAH: There's not much time to write on the road, but we're definitely feeling inspired and eager to get back in.

COLETTE: Everything is brewing.