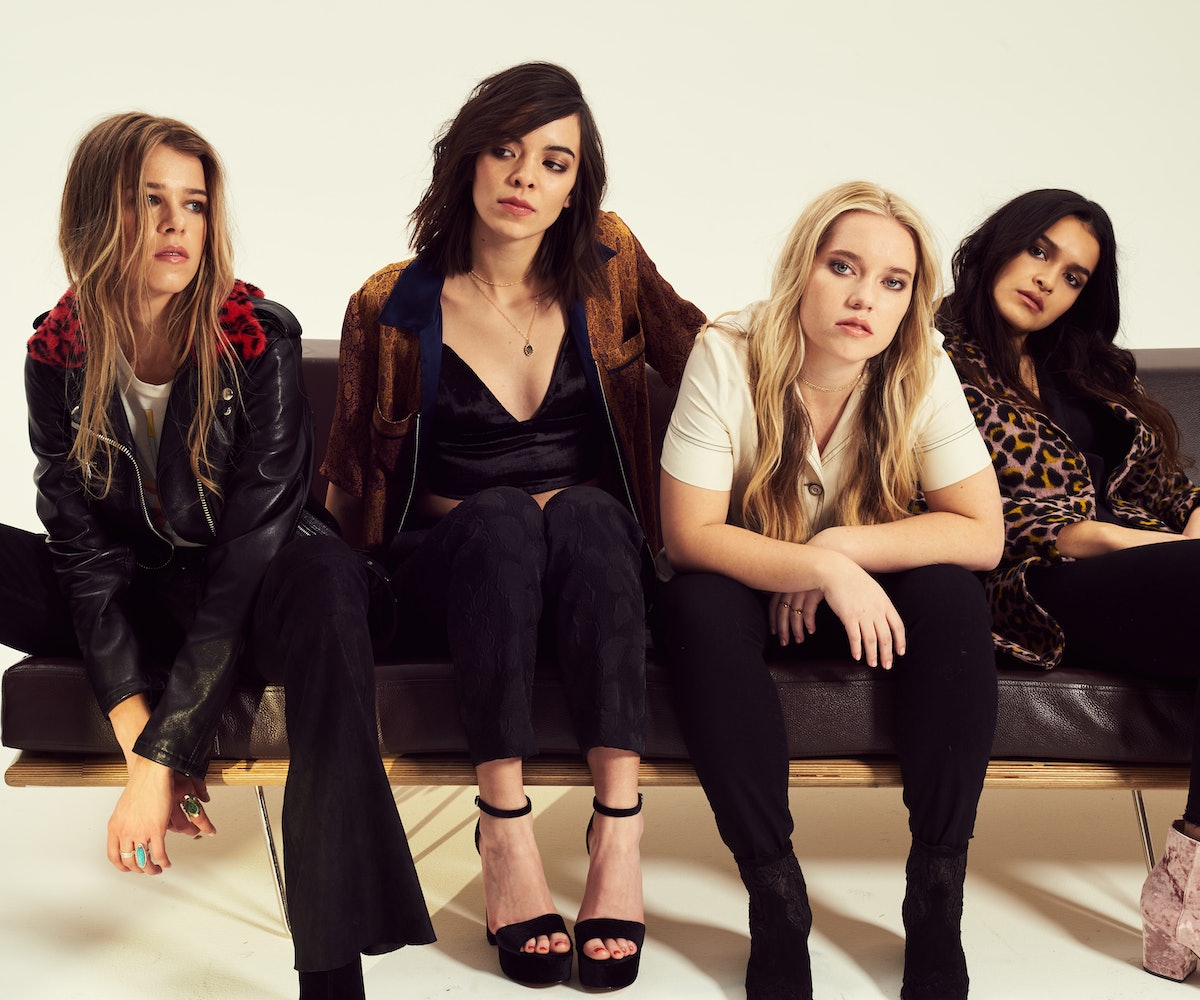 The Aces don't like being honest. Well, at least that's what their debut EP leads you to believe. Truthfully, the Utah foursome is as playful as they are sincere. As The Aces, sisters Cristal and Alisa Ramirez are joined by junior high pals McKenna Petty and Katie Henderson. They make the kind of music that's fearlessly honest, flirtatious as times, and deliciously pop rock. There is not one song off of their I Don't Like Being Honest EP you cannot bop to. Hell, it's the soundtrack a character in a John Hughes movie would lip-synch to with a pink hairbrush in their bedroom mirror. The Aces are onto something special—something that, for lack of a better word, is straight-up cool. Slip into your favorite '90s-inspired silk dress, throw on a black leather jacket, and press play. The Aces are just that: ace.

We all jam out HARD to The Drums and Rihanna when we’re driving.

Depends on the mood. We typically write a lot of music in L.A. and NYC. Both bring totally different vibes.

A loose T-shirt and black skinny jeans with some classic boots or Converse; top it off with some cool oversized denim or classic biker jacket.

We always have a group huddle, meditation, and prayer.

Probably the '80s. The music was rad and fashion was poppin'!

Out in nature, hiking in our hometown.

Cristal Ramirez:Forgive Me If I’ve Told You This Before by Karelia Stetz-Waters.

Katie Henderson:Girl in a Band by Kim Gordon.

CR: I was just really low-key. I was really into my music from a young age, so I skipped school a lot. I also got named “sleepy head” in my high school yearbook.

AR: My mindset was "[get] in and out as fast as possible." The only classes I really showed up for were Film as Literature and English. I was great at school before I decided I rather be in a band forever though! I was 4.0 to barely passing in one night. [Laughs]

KP: I was a bookworm and very serious about my grades. I would spend lunches studying for my AP classes. I also ran cross country and was on student council for a couple years. I always did music, too.

KH: I was a jock. I played soccer and basketball and took state championships in both. School, for me, was all about sports.

CR: I feel really proud of my drive and work ethic. If I really want something, I work until I get it.

AR: I feel like I'm very balanced. The type who, during the weekdays, gets up and goes to bed early and doesn't put things off. When the weekend hits, though, sayonara! I'm going out, and going hard! Talk to ya Monday. I vacation very well.

KP: I feel that people feel comfortable confiding in me and that I can relate easily to others.

KH: I feel I can stay level-headed and deal with adversity well, enjoying every situation.

We all hate spiders and snakes—yuck! And heights!

CR: I really love to box. Most people are surprised when I tell them that!

AR: I wish I were a bomb hip-hop dancer. I watch dance videos all the time. Is that embarrassing?

KP: I love school and learning! I went to college for a bit and an advanced education is one of my long-term goals.

KH: I love sports! I'm constantly watching NBA or NFL games until the girls get sick of me. [Laughs]

CR: I would love to learn how to record and produce music. I'm mostly a songwriter, but I really want to learn the other side of it, too.

AR: I really want to get into yoga. I’ve always dabbled, but I wanna go DEEP. Like, be one of those crazy-flexible, super “in tune” with their bodies type of yogi.

KP: I've been getting really into botany lately. After I got poison oak real bad on a hike, I want to know how to recognize every plant and live in the wild.

KH: DJing. I've started learning and getting better along with producing music.

Right now we are really focused on The Aces and releasing our debut album.

The sky is really the limit for us. We really just hope we always continue to release music that resonates with people. We want to innovate and do things that haven’t been done before.

I think we all really try to just go with the flow and realize that energy spent on things that you can’t control is energy wasted. We think that is one of the most important things to realize in life.