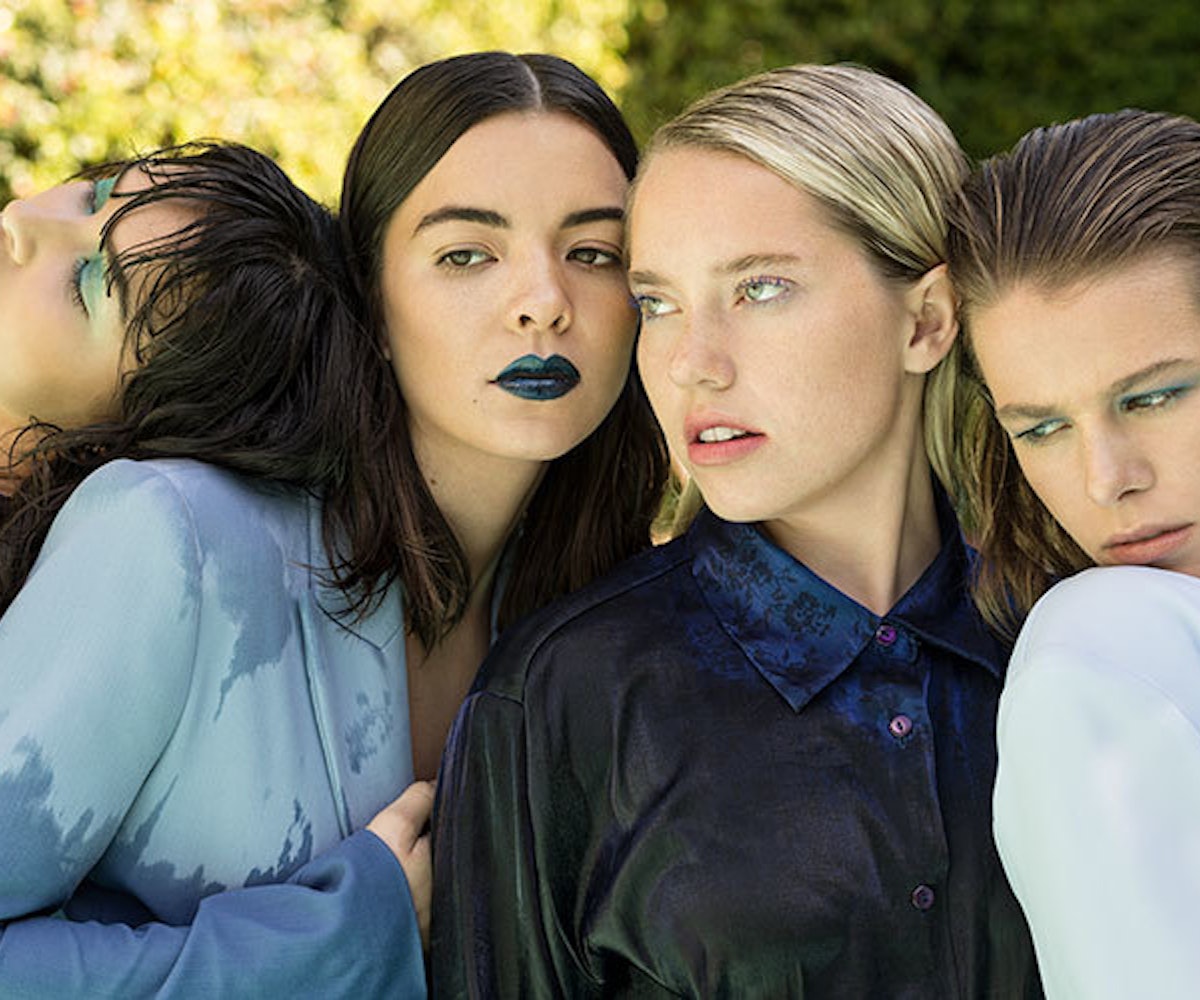 When you meet The Aces, you meet all of them. The Utah quartet is a unit and won't have it any other way. So when they hop on the phone hot off the heels of their Berlin show in late March, it's a flurry of endorphins, sound, and good vibes. The Aces are a band that thrives together and know they couldn't have made their forthcoming debut album, When My Heart Felt Volcanic, without their sisterhood.

"We've had interviews where only two of us have been asked to talk, but that's just not what we do," Cristal Ramirez, the band's singer and guitarist, says. "You either get all four of us, or you get none." Her sister and the drummer of the band, Alisa, adds, "I feel like a lot of lead singers get something like frontman-itis, but that's just not Cristal or anyone in the group."

The Aces have been The Aces for nearly a decade; we've been with them since their first magnetic debut single, "Stuck," came out in May 2016. Each release since, be it an EP or video, has only yielded more positive growth for the band. Now, nearly two years in professionally, The Aces are finally dropping When My Heart Felt Volcanic tomorrow, April 6, via Red Bull Records.

"The funniest thing about this whole experience is, yes, we've changed a lot as people and human beings but our dynamic has not changed," Cristal says. "We've just matured and come and grown to understand each other on a much deeper level."

It shows in spades. From the album's first song, "Volcanic Love," to "Just Like That" to the exquisite falsetto harmonies on "Put It On The Line," it's clear The Aces are all on the same page, personal egos checked at the door. "We all care so much about feeling like we deserve to be in this band and deserve the benefits of the band," The Aces' bassist McKenna Petty says. "We've all found our place, what we're good at, and know that our individual fulfillments directly affect our success."

"If none of us were true to ourselves, the band just wouldn't work," Alisa adds.

It's only fitting, then, that a debut album as strong as When My Heart Felt Volcanic from a band that's so strongly connected be so cohesive. Throughout the LP's 13 shimmering tracks are musings on love in the digital age ("Stay") and the all-encompassing courtship phase ("Lovin Is Bible"), all drenched in warm hues and a cozy comfortableness that only comes from an artist as confident in themselves as The Aces are. "This is who we are and who we're setting ourselves up to be," Katie Henderson, The Aces' guitarist, says. And who they're setting themselves up to be are role models and rock stars in their own right.

"We're not doing this for our personal benefit," Petty says. "We're doing this for us as a group and because we feel like we have important things to say as young women in this country who are a band and play our own instruments and make our own music. We have so many fans come up to us and tell us how they're inspired by just seeing us on stage. If we, as a group of girls supporting and uplifting one another, can give others the confidence to do the same, then we've won." Now that's a crowd mentality to get behind.