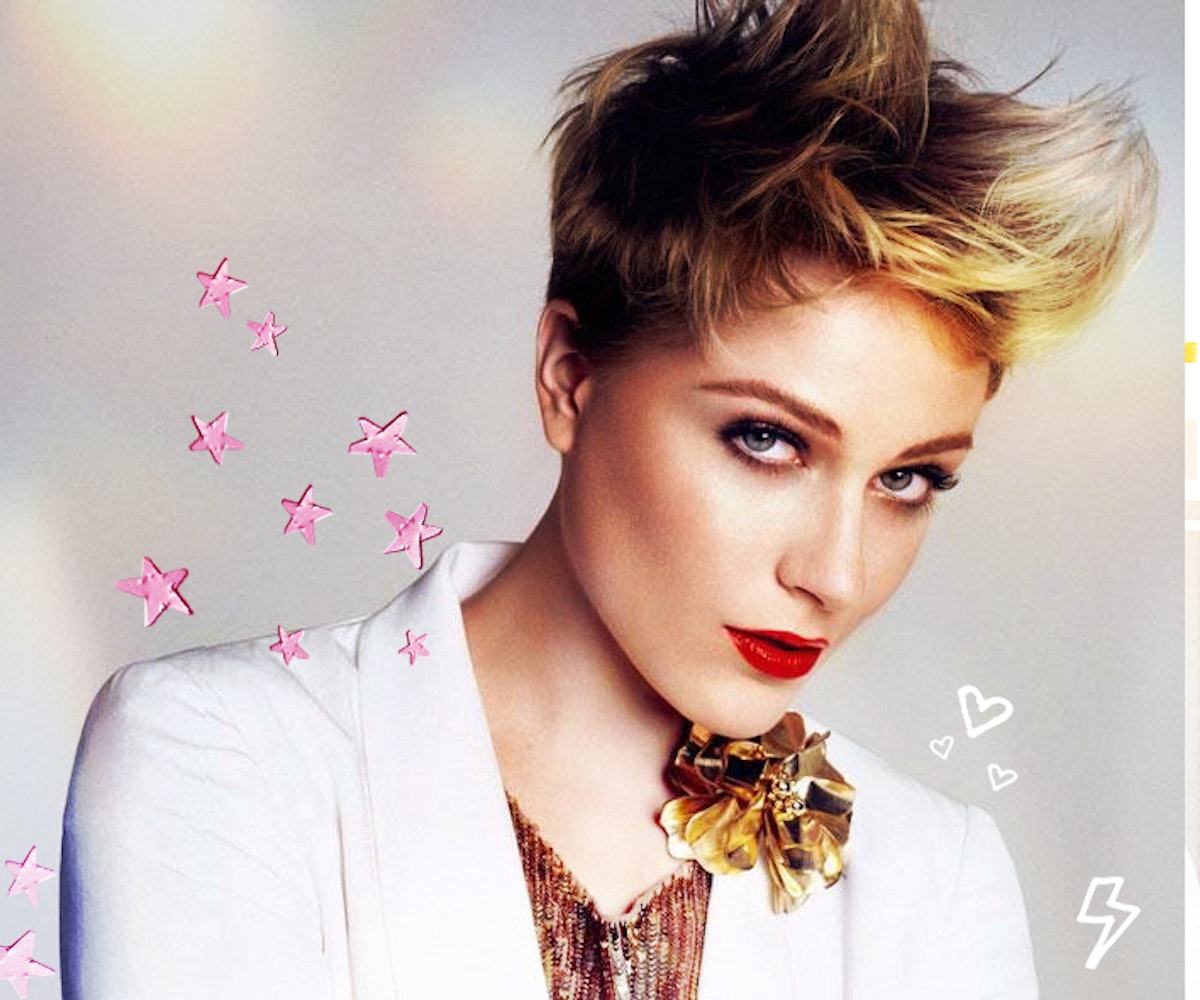 Besides being quintessentially cool, Evan Rachel Wood holds many titles: Bona fide movie star, musician, singer, mother, activist, Beatles lover, writer...and now, we are excited to announce that she can officially add NYLON editor to her expansive list of credentials. Besides being a mom to an active two-year-old boy, preparing to star in Westworld, the most anticipated new HBO series of 2016, and working on her own band, Evan has decided to join our team, bringing her unique perspective and badass wisdom to her new role. So join us in welcoming ERW to NYLON, and watch this space—we'll be hearing regularly from Evan on the topics that matter to her most, from the bands she's loving to the feminist causes close to her heart.

As an extra-special treat for her inaugural column, where she discusses the truly important "art of the playlist," Evan will dole out advice to one lucky reader—in playlist form, of course. Just tweet your question or current struggle with the hashtag #EvansNYLONPlaylist, and Evan will devise the perfect playlist to solve your woes. Think of it as therapy in musical form. Or, like she says below, a hug.

Music is my first and deepest love. I can’t imagine living in a world without it. The English language will only take me so far when I communicate, but music is able to say all the things I never knew how to say. So what if a simple playlist carried a profound amount of power we don’t normally give it credit for? A sort of metaphysical art, if you will. A space to feel without being watched. Or a glimpse of someone's soul and its most vulnerable parts.

This feeling always makes me think of Dr. Emoto’s theory of how water is affected by different words, sounds, and images—and if our body is 70% water, then these specific sounds and words would also have the same effect on us. He took it one step further saying different emotions also had different effects on the water. Here is the link to the study.

Because of this, every time I hear Bethany Cosentino in Best Coast hit those high notes on the words "I fly" in the song "California Nights," or when Matthew Houck of Phosphorescent cries out "I do not lay here in the dark waiting for thee!" in "Song for Zula," I am convinced it feels like tiny geometric shapes are vibrating in my heart.

Everyone has that experience with a song—maybe it's right after a breakup, or you just got that job you really wanted, or you’re falling in love—and it hits all the right notes and waves that, for some reason, seem to match up with exactly how you’re feeling. (Even if it's just “That’s Life” coming on the radio right when your car gets a flat.) The feeling gets to a point where it burns like a fire in your chest. It could be five years later, but when that song comes on, you’re transported back in time to that moment and feeling. You can relive it all over again.

For better or for worse, it leaves an imprint.

So if we match up the perfect group of songs this way, could we look inside ourselves and discover some new truth? Or even unlock another person's secrets?

I take playlists very seriously. Like John Cusack in High Fidelity serious. When I was a teenager, Spotify didn’t read your mind with algorithms and make you a fucking playlist. You had to download that shit, compile it, and burn it onto a CD, which would take so long it meant leaving the room to go watch a movie or something while you waited. Before that, we recorded songs right off the radio onto a cassette. The sound was so bad, but it was the only way to get your fix or make someone a mixtape.

But even today, when making a special playlist, a lot of time and care goes into it. Who is the person you’re making it for? What is your relationship to them? How do you want to feel when you listen to it? What lyrics are speaking to you?

You think about how the first song should be strong but not too strong with the central theme of the list running through it, making it land just enough to get you hooked. Then the songs start building to a nice pace before slowing down a bit. Maybe throw in a few joke songs so it doesn’t take itself too seriously and then shit gets real right before the big finish. When I make playlists, I want to tell you a story, give you an experience. I want us to connect in some way.

But when so much of the song choice comes straight from the gut, I always ask myself, how do I communicate a feeling and get lost in a vibe? Here's a tip: Try to anticipate what is going to move the Other. It really can be a wonderful exercise in empathy for that reason. On the other hand, it's also an incredible way to meditate inwards and self-reflect. I would suggest making yourself an angry playlist, a playlist that will make you cry, a playlist that turns you on, a playlist to drive to (if you drive), and a playlist to dance to, for starters.

They all come in handy when you need a minute to yourself to just swim in your feelings.

Of course, there are the classic party playlists, road trip music, birthdays, weddings, New Year's, etc. Building playlists on these themes has always been so fun for me. Since I’ve held onto a lot of them I get to see how they change over the years. I still have playlists I made in high school and it's like a time warp back into my 15-year-old psyche. Playlists can be like home movies of your state of mind.

Now, this suggestion is really Monica Geller of me, but sometimes I organize them in a way that tells the story of my year chronologically. When I curate an experience for my friends I am able to relive the night whenever I want with the push of a button. Sometimes when I have a communication breakdown with someone or feel like I am not being heard, I give them a playlist to explain myself better.

Exchanging playlists with someone can also form trust between people. If you both like the same music it almost helps you feel understood enough to let your guard down. A collection of songs with some thought behind it can make someone feel more seen than they ever have in their lives.

One of the most powerful uses of a playlist I have encountered was when my long-lost love (at the time) and I were getting back together after five years apart. There was so much to say, so much emotion, so much history. We decided to make each other playlists that explained how we felt: how life was without the other and how happy we were now, and we sprinkled in songs we thought we forgot or knew we loved.

When the day came to see each other for the first time again, we listened to the playlists, one by one, and looked at each other for hours. We laughed, wept, and held one another. It was the perfect way to just fall right back into it. To awaken those memories we kept stored through music and fall in love all over again without having to say a word.

Of course, sometimes it goes the other way too. Once, when I was going through a very painful breakup, a way I coped with the loss was starting a group chat with my closest friends and asking everyone to think of all the best breakup songs. With our powers combined, we would make the ultimate playlist. For the next few weeks, we all chimed in with suggestions, turning it into a game. I remember it helped me laugh and make fun of myself but I also had all these new song recommendations from people I loved. Each one felt like a hug; it was the ultimate comfort.

Now, I know there is a lot of controversy surrounding Spotify, and as a musician, it does put me in a dilemma regarding consistency with my son and his musical interests. He loves music but because his parents are divorced he spends time in two different places with different kinds of music and it proved challenging for his father and I to keep up with what he was listening to.

So we started a Spotify playlist and made it collaborative, which means no matter where either of us is in the world, we can both add songs we see our son responding to or that we think he would like. That way we don’t have to miss a beat and he always has the comfort of the familiar. It's pretty great.

The possibilities are endless. Music connects people. Possibly more than anything ever has, except maybe food.

Music should not be underestimated. And neither should the never-ending possibilities of being able to create the soundtrack to your life. It can make those little moments just a little more magical.