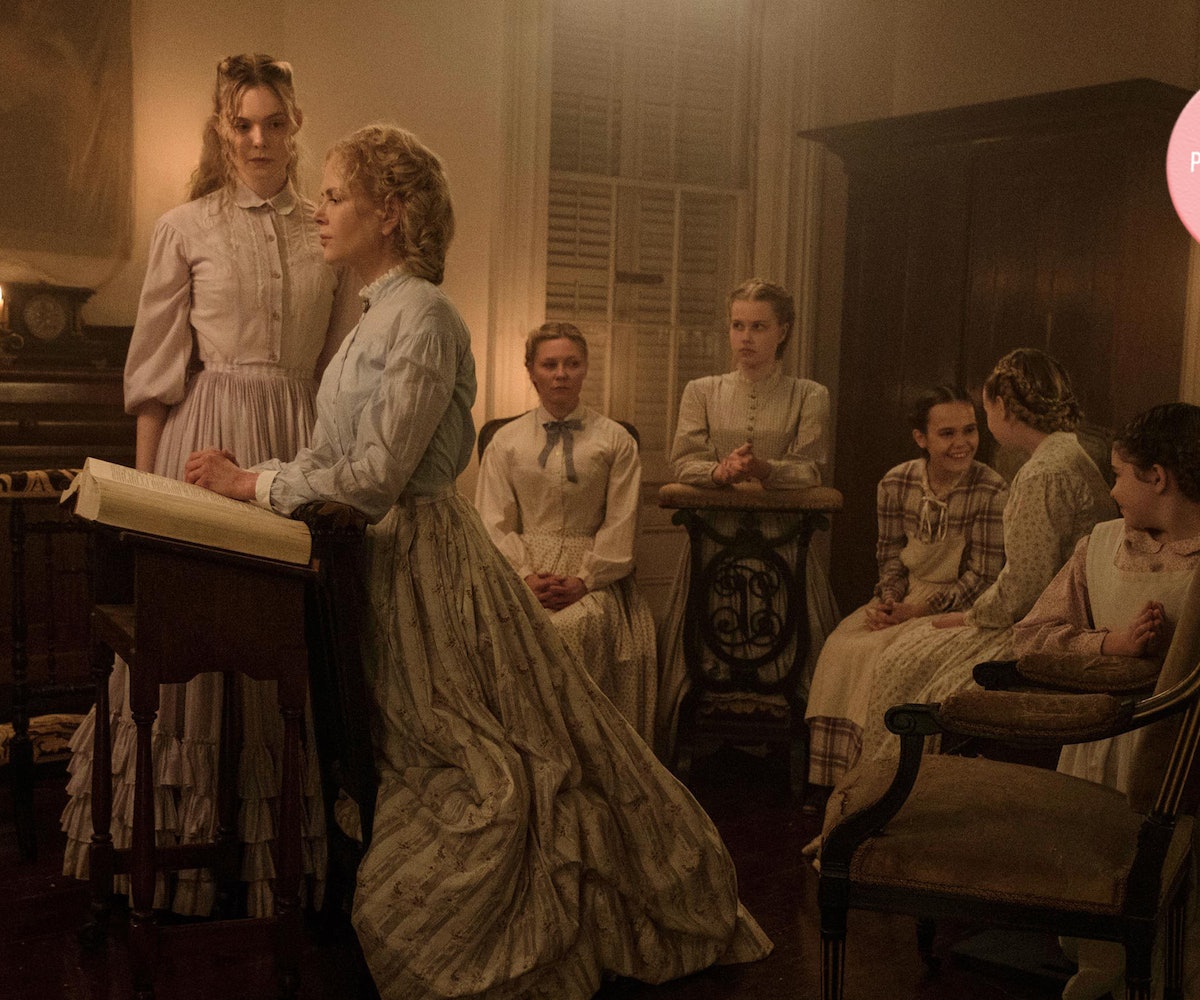 A Sofia Coppola film production is always going to be equal parts delicate and strong, soft but laced with cunning, voracious curiosity. She captures youth through muted hues, secret glances, and an overarching sense of ennui. She explores femininity and all its complexities, longings, and intersections. With The Beguiled, Coppola's outlook on girlhood has never been more concise and biting: Girls just want to have fun.

The Beguiled follows the events that unfold after a badly wounded Union soldier gets brought to a nearly abandoned girls school in Civil War-era Virginia. Colonel John McBurney (Colin Farrell) is discovered by Amy, a young student at the school, while out gathering mushrooms for dinner. Right off the bat, the role of nurturer and provider is introduced through Amy's instinct to help this wounded human—regardless of his political loyalties—and her resourcefulness when it comes to nutrition. From there, McBurney's presence in the boarding school electrifies the few students left at the institution, along with its leader, Miss Martha Farnsworth (Nicole Kidman), and the school's teacher, Miss Edwina Dabney (Kirsten Dunst).

What follows is a story of infatuation, repressed and budding sexuality, jealousy, resourcefulness, and, ultimately, bravery. It's Miss Martha who reminds the girls that bravery is doing what's necessary at the given time. She and Miss Edwina instill a sense of practicality in their students' lives; scenes of them learning to sew cut to Miss Martha stitching up Colonel McBurney's wounded leg. Girlhood, then, is to be capable, capable of doing what's right to mend a problem at hand—even when that problem manifests a life or death reality. The girls of The Beguiled aren't vindictive; they're powerful, intellectual, and superhuman in their ability to play the table for the prosperity of their group.

Of course, there's a healthy amount of precociousness pulsing through each of The Beguiled's students, with Alicia (Elle Fanning) getting the most attention. For it's Alicia who is the eldest of the students and sheltered from the outside world that's waging war. Colonel McBurney's presence awakens her playfulness, intensifying her curiosity and rebellion. The flirtations are discreet at first, done through subtle pastel pinks and blues, high-low necklines, and coy looks. It's not so much the fact that a man is in the house, but that it's a disruption from the norm. Colonel McBurney represents a physical shake-up to these girls' otherwise uneventful lives. He inspires the women of the school to reflect on their pasts, be it with their fathers, lost husbands, or former city life, and stimulates the girls' very human urge to explore the world on their own volition, using the tools and wisdom imparted by both Miss Martha and Miss Edwina.

The Beguiled's portrait of femininity isn't vengeful, though that's how the only man in the story sees it. But he is merely lashing out because masculinity is fragile and, in his eyes, these women and girls should want and need his presence. In The Beguiled, girlhood, and, in turn, womanhood is not defined by a man. It’s defined by bravery, wit, a keen sense of resourcefulness, and resilient sisterhood.