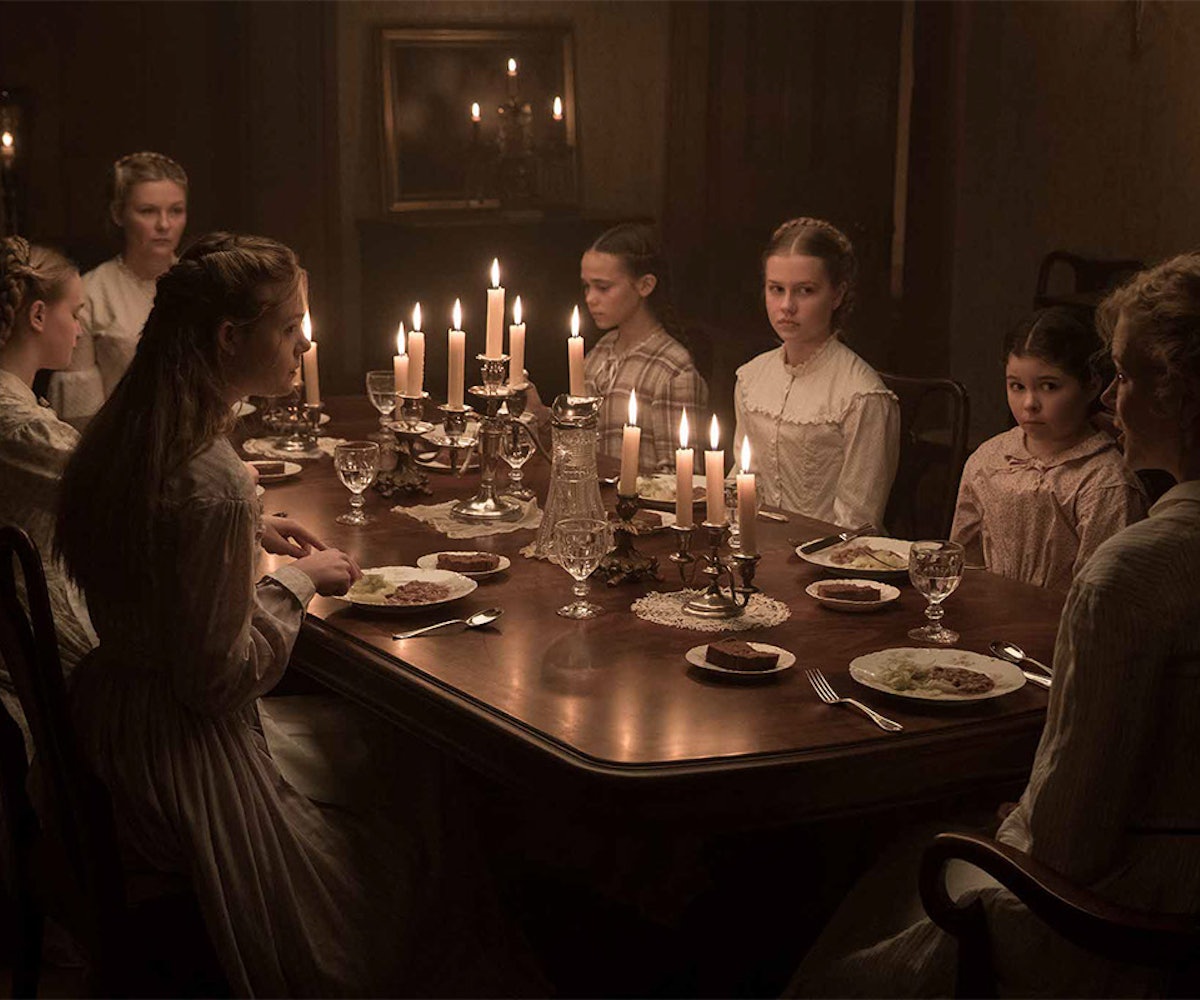 Half a decade ago, costume designer and frequent Sofia Coppola collaborator Stacey Battat was fitting Emma Watson into a pink Juicy Couture tracksuit and UGGs. After Coppola opted to forego adding a specific timeline to The Bling Ring, the 2013 feature film loosely depicting the infamous workings of real-life teenagers who burgled the homes of celebrities like Paris Hilton and Lindsay Lohan, a thrilled Battat was able to bring back the ever-popular tracksuit of the early aughts to the narrative that originally took place in 2008 and 2009.

It's that commitment to tugging on the audience's nostalgic heartstrings and evoking memories rather than adhering to a strict timeline, a fact that's abundantly clear in the first episode of Z: The Beginning of Everything (Battat dressed the first episode; Tom Broecker worked on the rest of the series) as well as in films like Somewhere, Country Strong, and The Disappearance of Eleanor Rigby, that makes Battat one of the most exciting costume designers of today.

For The Beguiled, which marks the third time the costume designer and the legendary director have joined forces, the logo-emblazoned sunglasses and bags of The Bling Ring were traded in for a cinematically stunning rotation of dresses in ivories and soft pastels. Set in Virginia during the Civil War at a mostly abandoned girls' boarding school run by Miss Martha (Nicole Kidman), Battat abandoned the black and brown mourning dresses of the time for an explosion of floral and plaid prints, Swiss dot and polka dot patterns, and colors like pinks and blues, all flanked by delicate bows, intricate buttons, and contrasting trimmings that demonstrate an attention to visual detail integral to the work of this specific director and costume designer. The costumes not only add to the back stories of each of the main characters—played by Kidman, Elle Fanning, Kirsten Dunst in what are some of the best performances of their careers—but also mark their growth and transformations as the eerily sinister narrative unfolds.

We caught up with Battat ahead of the movie's June 23 theater release to learn more about her inspirations, working with Coppola, and her favorite looks.

What were some of the things that you looked to for inspiration for the costumes?

I went to The Met and looked at all of the fabrics swatches from that era, and then, on top of that, just general silhouettes of that time.

There was a previous production of the movie and it's based on a novel; did you reference either one prior to starting?

I like to go from a clean slate in general. I like to get my inspiration from where I am, and it makes it feel more authentic to me because it comes from my own brain, so I don’t usually like to look too much. I need to know how I feel about it before I look at it. It was the same with The Bling Ring; I decided what these people should look like before I watched Pretty Wild. But that’s just me.

When you talked to Sofia Coppola, did she have any specific requests for you?

Yeah. We work together often, and the way that we do it usually is that the production designer and Sofia Coppola and I and the director of photography sit down and we talk about what kind of world we want to create; [for The Beguiled,] we talked about flowing fabrics and the idea of light passing through them and that ethereal quality. Something that Sofia had said [that she wanted the clothes to reflect] was that [the female characters] were like ghosts, because they were these people that were left behind in this house.

There are a lot of color and patterns and textures in the costumes, which is unusual for that time period; what prompted you to go in that direction?

The thing is that those were the fabrics that they could have had—they weren’t out of the realm of possibility. Otherwise, what was ideal for that time period was brown and some dark purples, because they had just figured out how to dye purple and, I think, yellow—some pretty putrid colors. So that’s what people were wearing, but they were also in mourning—a lot of people had lost their brother or father or boyfriend—so they didn’t have that festivity in the way that they dressed. But, in our world, we felt like [our choices] were prettier, but also, given the circumstances of the war, it could have been fabrics that they had in the house, and they didn’t buy any new ones because they were trying to be economical.

There was also a lot of mixed and matched patterns and florals and textures. Given how intricate the set and the furniture in the house were, was that also something you put a lot of thought in? How everybody would look next to each other and against the background?

The mixed-and-matched pattern thing was actually that was indicative of that era. They did that. Like, in one dress, they would have like polka dots and stripes. They wore a lot of patterns, and they usually didn’t wear big prints because big prints were more expensive. They made quality clothes, so it was harder to match up the print if the print was big; if you had a big print, you were very wealthy because you could afford such big fabric.

How did you source the costumes?

The majority, I’d say 90 percent, was custom made.

You can tell with all the little touches like the contrasting buttons and the embroidered collars.

There’s a very clear differentiation between the three main women, Nicole Kidman, Elle Fanning, and Kirsten Dunst, and I think it really came through in costumes. How did you envision the three different looks?

Nicole, was in charge, so I wanted her to feel less... I don’t wanna say less frivolous but less feminine I guess, and less dainty and less fragile. I wanted her to seem stronger and more able to handle stuff, so she didn’t wear a ton of color and she had silhouettes. In some respect, they are silhouettes of that time, like that vest—that is the silhouette of the time that was modernized and kind of feels masculine. So I chose to put her in that. She is also the head of the household, it’s something kind of subtle, but she has a belt and then there’s a little bag attached to the belt; it’s called a ridicule, and the head of household would keep scissors and various other stuff in there.

With Kirsten, I felt like she was from the city and more sophisticated, but also her character was very romantic, so I wanted her to feel a little softer. For Elle, I felt like her mother still buys her clothes even though she was naughty; she wasn’t old enough to buy her own clothes, and her mother would have been like, “No, that’s too low cut,” you know? So she had a lot more girly things going.

Where did you source all the accessories from?

Nicole's hat is from Eugenia Kim. I mean, it’s kind of—it went through a transformation process. The rest of the hats are old, for the most part, or rented. Some of the jewelry was made for us by Ten Thousand Things. They made the bracelets that Kirsten wears at the end and some of the antique Victorian jewelry.

Did you have any favorite outfits from the movie?

I love Elle’s lavender skirt with the matching top with the ruffles. And then, I love Nicole’s polka dot one. I like Kirsten's black-and-white evening dress at the end; that one has a big black velvet bow in the back, and there’s stuff on the bottom, too.

What was your favorite part about dressing for this time period?

I love the ceremony of it because there's the corset and the petticoats, and the petticoats and the undergarments were so beautiful. The nightgowns were stunning and had so much intricate embroidering and lacework, and I love that. It was so delicate and so dirty. Nicole’s and Kirsten's were custom made, and they took forever.

You worked with Sofia before on The Bling Ring, which is very different from The Beguiled. Did it change how you approached the costumes for this film?

It wasn’t that different because I feel like our process is streamlined at this point, so we’re good at communicating. I mean it was different in that I did sketch a lot more than I ever had, and we were custom making stuff, so we had to define what it was gonna be, you know, we couldn't go back basically. And we didn’t really run the outfits by the actresses prior to fitting.