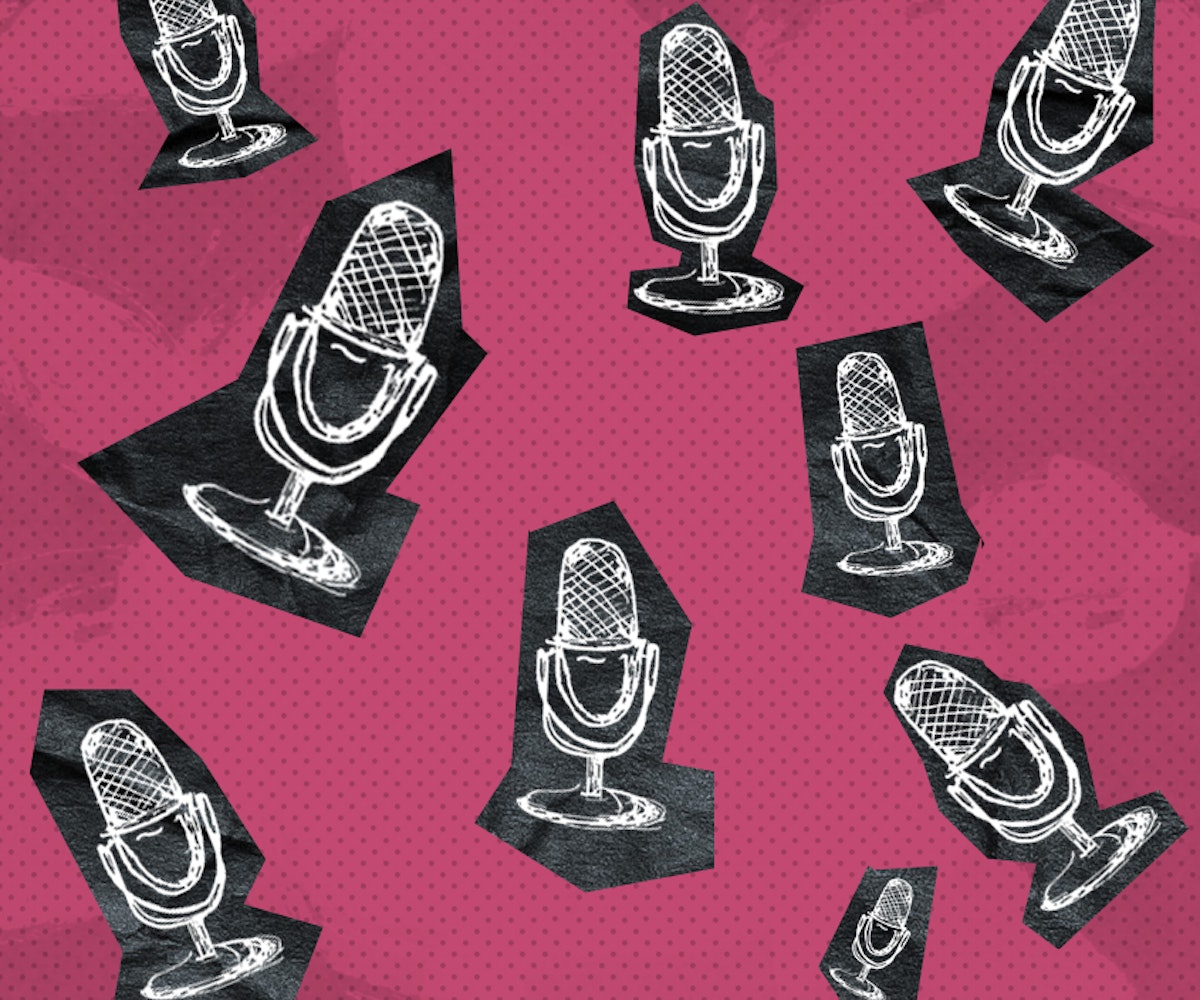 We're in the middle of a podcast revolution. Take a quick scroll through your iPhone's official podcast app, and you'll discover an ever-expanding audible world of smart, funny, and engaging people—from comedians to writers and to some dude in his parent's basement—hosting shows about topics that fascinate them. The podcast craze is so intense that it can be overwhelming, just with the sheer volume of options available, to find ones that would most appeal to you. So to help you sort through all the literal noise, here are nine podcasts that were created by awesome women, for awesome women. (If you're a dude who wants to check them out, like the not-so-anonymous writer over here, more power to you.)

Reductress, the spot-on parody site that mocks feminist websites and women's publications, just launched their first podcast on Wednesday. It's still too early to tell what it will become, but if the official description is any indication, the show, which is hosted by "fictional Reductress editors” Quenn (Nicole Silverberg) and Div (Anna Drezen), is going to be something special.

Dubbed "a podcast for long-distance besties everywhere," CYG is deceptively casual, its format involving hosts, Ann Friedman and Aminatou Sow, hopping on the phone to chat about pop culture, politics, womanhood, and everything else in between. With Friedman being a popular freelance journalist and columnist for New York magazine, and Aminatou Sow a rising force in New York's tech industry, their conversations are punctuated with whip-smart observations about the world we live in. And every other week, they phone a friend, who is just as awesome as them.

Juliet Litman and Amanda Dobbins sound like they've been friends forever, which makes their conversations about everything, from Taylor Swift's career to Jennifer Garner's Vanity Fair profile, a joy to listen to. It doesn't hurt that these two pop culture die-hards are some of the sharpest entertainment writers on the Internet. If their last episode, titled "All Boy Bands Everything," sounds like it's up your alley, then this is the show for you.

Alexi Wasser is one of those multi-hyphenates that are very specific to L.A: She writes, she acts, she blogs, and obviously hosts her own podcast. Wasser specializes in talking and writing openly about her sex and dating life, and that spirit of transparency rubs off on her guests, who often can't believe they're sharing such personal stories with complete strangers. Call it the Alexi effect.

If Anna Faris is unqualified to do something, it's not hosting her own podcast. Faris enjoys a successful acting career so this show, where she mostly interviews her famous friends and acquaintances, is done purely for her own enjoyment, and it shows. The title actually refers to Faris' claim that she isn't qualified to give relationship advice, which she often likes to do for callers, but given what looks like a perfect marriage to Chris Pratt, we'd have to disagree.

New York magazine's very illuminating and often funny X-rated podcast is led by their star sex columnist Maureen O'Connor and editor David Wallace-Wells (their third host Allison P. Davis recently left for another job), and no topic is too taboo. To give you a sense of where they're willing to go, look no further than episode titles such as "What Can't Period Sex Tell You About Someone's Sex Life?" "Your Penis Is Disgusting," and "Finally Paying Attention To Vagina Size." Told you.

The flagship show in Buzzfeed's burgeoning podcast empire, this deeply intelligent and incisive podcast shines thanks to hosts, Heben Nigatu and Tracy Clayton, who share an effortless rapport when dishing about everything from race to pop culture. And the hook here is that the two actually are drinking (hence the show's title), which adds to the feeling that you're hanging out with friends. Their interview with Hillary Clinton last year is one for the podcast history books.

On this very straightforward, very fascinating podcast, host Lauren Schiller conducts in-depth interviews with women "who are changing the status quo," as she puts it. That includes CEOs, engineers, philanthropists, journalists, and other mega strong women who have this life thing figured out.

Nasty Gal founder Sophia Amoruso bring her #Girlboss book to life with extremely entertaining interviews with like-minded women who are killing it, mostly in the creative world. Artist Petra Cortright, screenwriter Kay Cannon, and living legend Courtney Love have all made appearances.

NEXT UP
Culture
Spice Girls May Reunite For King Charles’ Coronation
Culture
For The Girls Of Forever Magazine, What's Forever Is Friendship
Entertainment
Harry Styles' "As It Was" Grammy Performance Featured A Silver Tinsel Onesie
Entertainment
Beyoncé Is Now The Most Awarded Artist In Grammy History
Style + Culture, delivered straight to your inbox.