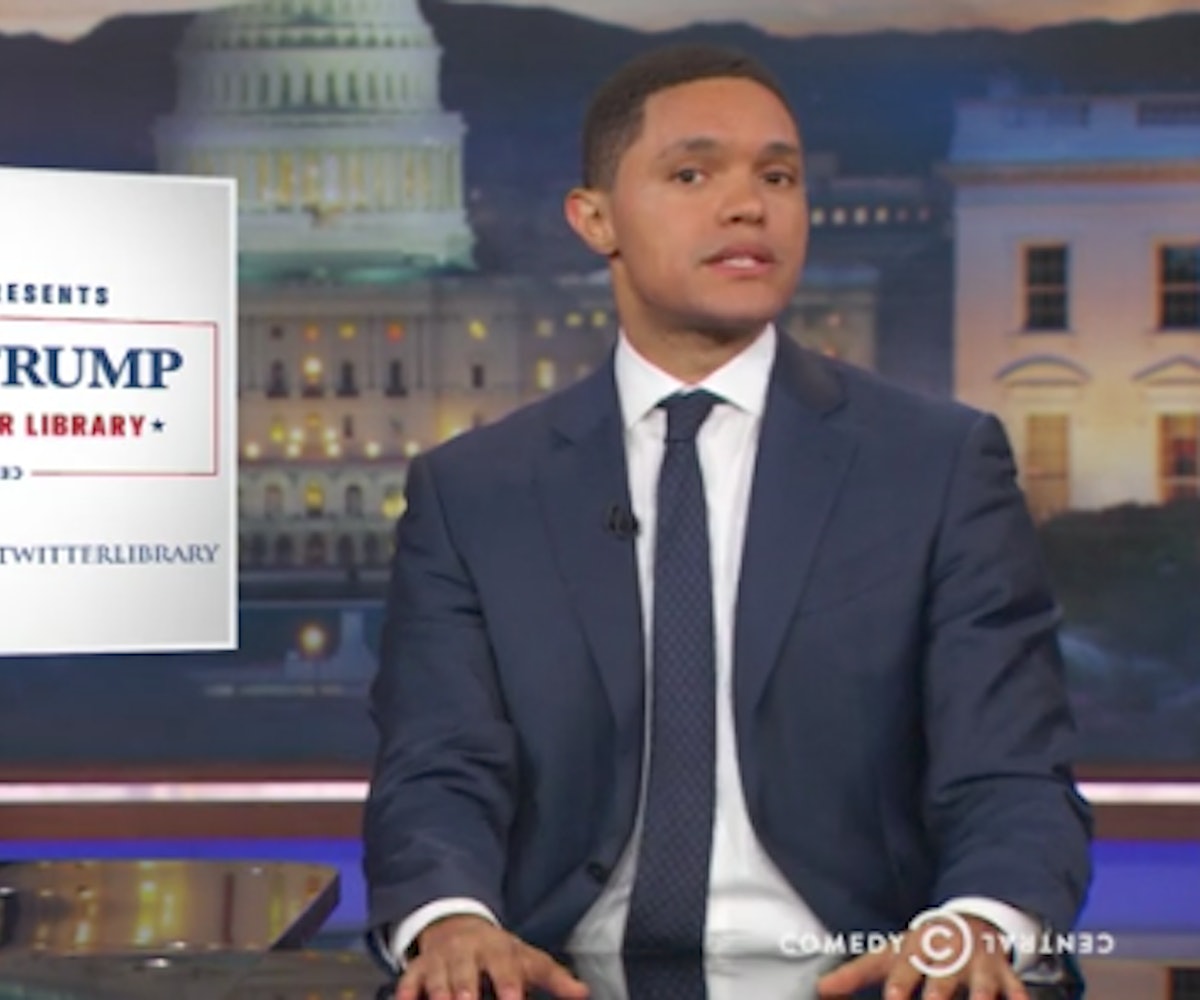 Before Donald Trump was inaugurated as president, some had thought (and even more had hoped!) that he might ease up on the whole tweeting thing. Or, at least, seek some counseling for what is clearly a self-destructive compulsion. But 143 days into his presidency, it feels like we’re talking about his tweets more than ever. It’s only been two weeks since cofveve broke the internet’s brain, and just last week, a Twitter bot that puts all of Trump tweets into the format of official White House press releases went viral. Then there was James Comey’s revelation that it was Trump’s tweet about secret “tapes” that caused him to share his now-infamous memos with the press.

Acknowledging the historic nature of the president’s tweets, Trevor Noah announced on yesterday’s Daily Show that they’ll be setting up the Donald J. Trump Presidential Tweet Library in Midtown Manhattan. This is a real place that you can visit—from this Friday through Sunday, at 3 West 57th Street—which also happens to be right around the corner from Trump Tower. The museum, which will be open from 11am to 7pm, will feature an interactive timeline of Trump’s tweets, video testimonials from some of the people Trump has attacked on Twitter,  and, according to Noah, “a chance to see if you can tweet like President Trump.”

Other highlights, according to the official press release, are below:

• THE COMMANDER-IN-TWEET: If there’s one thing Trump is known for, it’s tweeting in response to potentially sensitive situations. At the library’s marquee attraction, attendees will have the chance to do the same by composing a totally necessary tweet upon a golden toilet installed in the Oval Office.

• SAD! A RETROSPECTIVE: A video retrospective will solemnly display a collection of people, places and things that the President has deemed “SAD!”

• TRUMP VS. TRUMP: Here we document President Trump’s unique ability to hold a variety of different opinions on the same subject.

• VERIFIED SURVIVORS: Listen to a series of testimonials from a collection of verified survivors, as they recount the trauma of being targeted by Trump on Twitter.

• DONALD J. TRUMP: A MAN OF CHARACTERS: In a short docufilm narrated by Daily Show correspondent Jordan Klepper, the library takes a look at the history of Trump and the 140 character platform he’s revolutionized.

• MASTER WORKS FROM THE COLLECTION: Sit back and admire some of Trump’s finest work as a master tweeter.

• TWISTORY IN THE MAKING: DONALD J. TRUMP ON TWITTER: Attendees will be able to study the broad arc of Trump’s history in one comprehensive timeline. From his very first tweet about his appearance on Letterman, to his proclamations that Obama was born in Kenya, to his important, early morning screeds as the leader of the free world.