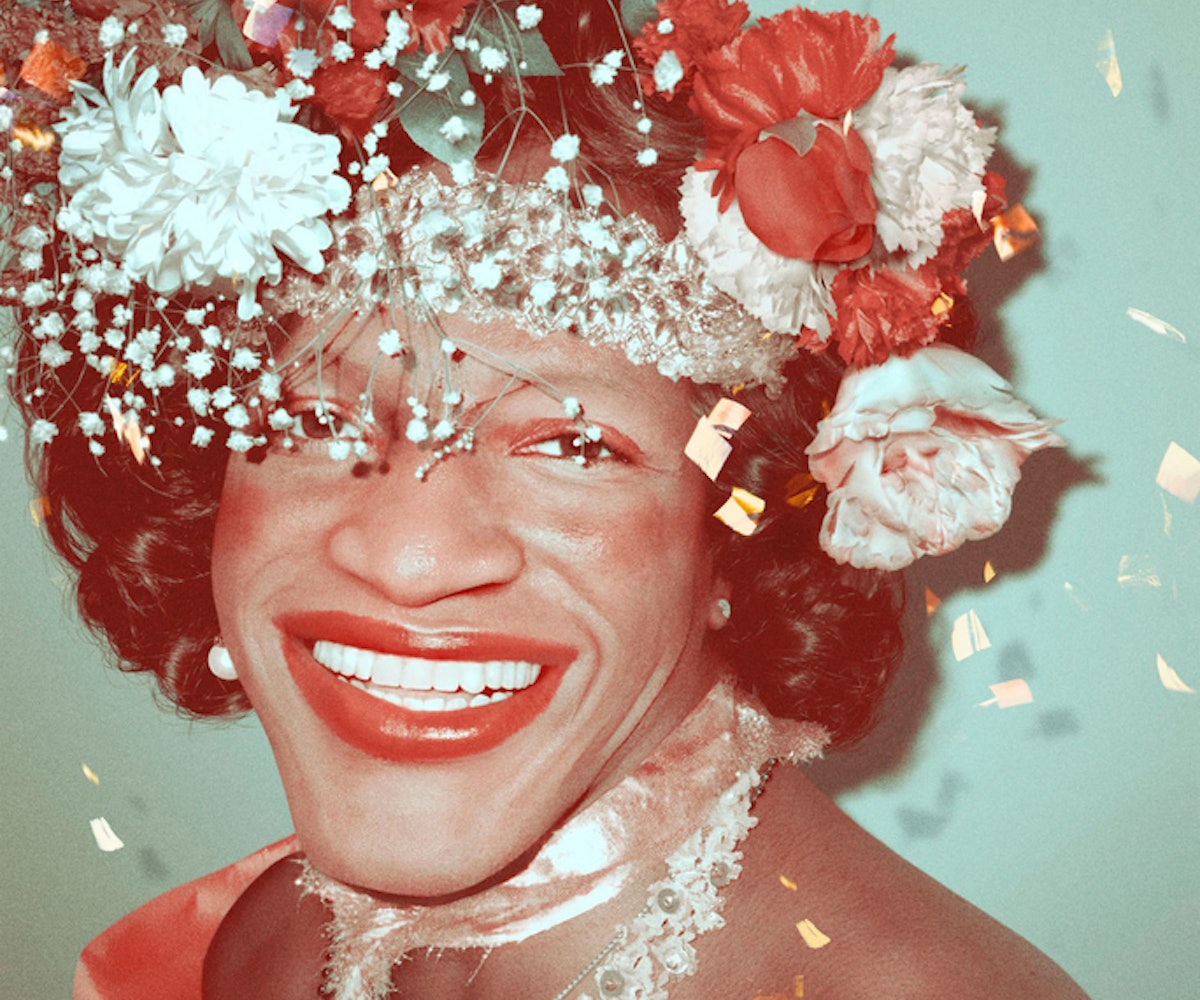 Marsha P. Johnson is considered to be the Rosa Parks of the LGBTQIA movement. She and her friend and fellow activist Sylvia Rivera, both of whom identified as trans women, were on the frontlines fighting for equal representation and rights for queer people well before the 1969 riots at The Stonewall Inn in New York City. Johnson is said to have been a beacon in the Village, going out of her way to greet people, ensure their safety, and be a friend. She maintained that spirit until her death on July 6, 1992. Johnson was 46 years old, and to this day, no one quite knows how she died.

David France's new documentary, The Death and Life of Marsha P. Johnson, uses the mystery of Johnson's death as a launching point for exploring just how far the LGBTQIA movement has come and just how far the movement still has to go. "We are our own worst enemy," Victoria Cruz, an activist and friend of Johnson and Rivera's, said following a pre-screening of the documentary late this September. "We have gay, lesbian, bi, transgender, queer, and allies in numbers." And yet, out of the staggering 21 murders of gender non-conforming people in the United States this year, 18 have been trans women of color, like Johnson. "Nothing has changed," Cruz said.

Of course, many people will dismiss the idea that things haven't changed by pointing to the ways in which they have. For example, same-sex marriage is legal throughout the United States and LGBTQIA representation is on the rise within the media and Hollywood. An early 2017 survey of people between the ages of 13 and 26 across the U.S. and U.K. said they identify as something other than heterosexual. The access we have to experts on the topics of gender and sexuality is unprecedented; the internet has made it easier to connect with other people who identify similarly to you. Being queer isn't as isolating an experience as it once was. And yet, despite how incredible those changes are, prejudice still runs rampant in this country. Violence is still a huge problem. Legislators still work to enact anti-LGBTQIA laws. So while progress has been rapid, we haven't reached some utopia yet; there's much work to be done. And this is exactly what France's documentary reminds its audience: Do more because there is still so much more to do.

Through the detective work of Cruz, France paints a bittersweet portrait of a life with purpose, a voice used for good, and a world that still doesn't quite know what to do with those who are outspoken. Cruz is diligent in her research. She puts the effort in to call local authorities, dig through old files, and travel to New Jersey where Johnson's surviving family lives. It soon becomes apparent that those in law enforcement want little to nothing to do with the cold case of Johnson's death. Much like the way Hollywood has swept the trans women who sparked the LGBTQIA movement to the side in favor of white-washed representation, so, too, do government officials and the FBI. Johnson's death seems not to matter to them very much at all, much as her life was deemed unimportant by so many of her contemporaries.

How very wrong they all are. The life of Johnson and Rivera, whom the documentary gives equal screen time to, is as important as their deaths. Johnson's alleged murder and Rivera's tragic final years reveal the sick stigmatization of trans women of color. They may have made the culture and helped us get to a point in our collective history where actors like Laverne Cox, a trans woman, are starring in major television shows, but their names died along with their bodies, leaving it up to the community and LGBTQIA historians to speak truth to the media's powers. "We all killed Marsha, in a way," Bryce Dessner, who soundtracks the documentary, said.

By the end of France's documentary, in the final scene with Cruz, it's clear that who- or whatever caused Johnson's death isn't important; it's her legacy that will live on. "The work has yet to begin," Dessner adds. I approached Cruz at The Stonewall Inn after the screening wrapped and asked just one question: Would Marsha be proud today? Cruz paused. "This," she said motioning to the historic room, "is a struggle for life." But proud? Cruz sighed. "She'd be fighting."

The Death and Life of Marsha P. Johnson will be available to stream on Netflix October 6.

NEXT UP
Life
Netflix Dropped A Sneak Peek Of Bridgerton Season 3
Life
Away’s Second Designer Collection Will Have You Traveling In Style
Life
Joseph Osmundson on Virology, Monkeypox, Queer Intimacy
Life
Jennifer Coolidge Checks Back Into ‘The White Lotus’