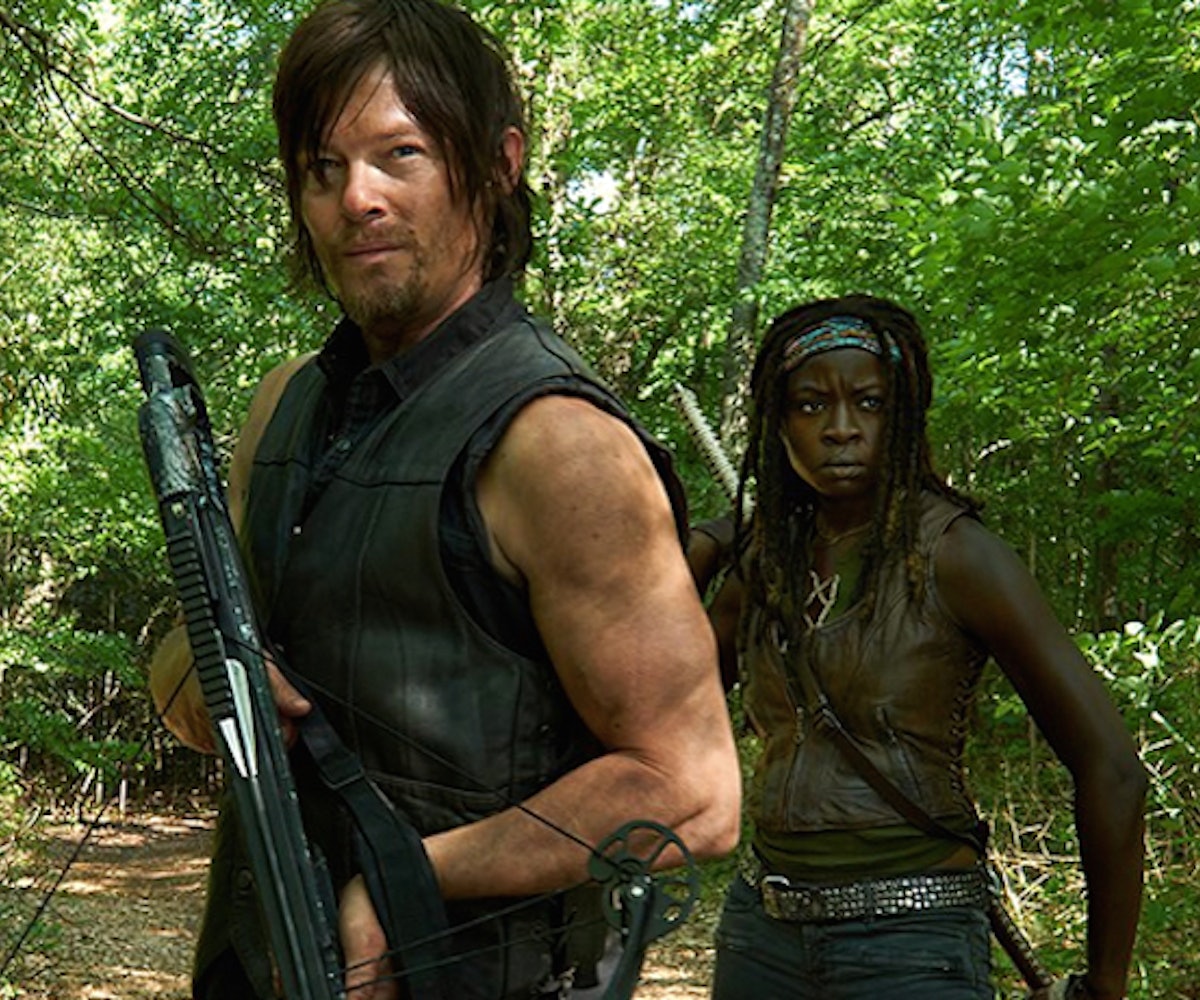 This Sunday, we’ll return to Rick, Michonne, Daryl, and the rest of The Walking Dead gang as they try to survive both zombies and humans in the post-apocalyptic soap opera that has consumed much of our lives over the past five years. When last we left the crew, they were holed up in the bougie gated community of Alexandra and about this far from realizing that Sheriff Rick just might be turning into a psychotic megalomaniac. Fun, right?

From previews, it already looks like season six is shaping up to be an action-packed journey into Rick’s eroding humanity (again, fun!). It’s promising—but, as fans, we have questions. We have wants. We have needs.

Here’s a list of all the things we’d like to see happen in the next season of The Walking Dead. Are you listening, Gale Ann Hurd?

Get the gang out of Alexandria and into D.C.

Plush carpets and picket fences are nice and all, but the series tends to bog down the longer it stays in one place. Also, watching the sorta-okay Fear The Walking Dead and it’s depiction of a burned-out Los Angeles has us hungry for a look at what our nation’s capitol became after the walkers took over.

Have Carl rebel against Rick.

We mean, he’s a teen, right? Rebelling against their parents is what teens do. There were inklings of true adolescent behavior from Carl earlier, but with season five’s run-and-gun style, there really wasn’t room for it. Now that Rick is sliding off the rails, it would be a perfect time for his son to turn against him.

Have Maggie finally get angry at someone…preferably Rick.

She’s been so strong so long and suffered so much. Yet, she’s never really shown an ugly side to her often saintly personality. Doesn't she deserve to get furious and nasty at least once? Also, if you look at it one way, she’s lost her entire family since Rick came into her life after Beth died last season. Granted, Rick’s group met the Greenes because Otis accidentally shot Carl, but Rick has failed her in many ways. Yeah, we’re kind of going through an anti-Rick phase right now.

Let Glenn not be perfect for once.

We don’t know if you’ve noticed, but Glenn is sort of winning the apocalypse. On top of being the most moral and levelheaded member of the group with a great wife and an amazing skill set, he never screws up and never makes the wrong decisions. It’s getting a little silly. Maybe have him drop a fresh-out-of-the-oven pie or fart or something.

Despite a lousy record of keeping African-American men alive (more on that later), the series has collected praise for including and showcasing black characters. But America is more than that. We’d love to see some Southeast Asians, people of Middle-Eastern decent, or other often underrepresented ethic groups. Aside from that, the appearance of first-generation immigrants from any country could add topicality. Speaking of which…

Develop Rosita into a real person instead of a sidekick.

As the lone Latina, it would be nice if we learned more about who she is. She’s certainly come a long way since she debuted in pony tails and booty shorts (ugh). But she, actor Christian Serratos, the show, and the audience all deserve a little bit more.

Have Maggie get pregnant.

Are we to believe she’s on the pill? That she and Glenn always use condoms? This has seemed inevitable for so long, the producers should just finally let it happen. Not only would it be a good plot point, it could bring up interesting issues of abortion and choice that were very poorly handled back in the Laurie era.

Use the damned “Z” word.

Walkers, Geeks, Biters—how about someone calls them “zombies” even just once?

Give group leadership over to Glenn, Michonne, Carol, or even Daryl.

Obviously, Rick’s state of mind and growing violent streak are going to be in sharp focus season six. Slowly, the producers are putting more distance between the viewer and the series’ lead—an interesting strategy that would get even more fascinating if another major character stepped up and took control of the group. Not only would we have Rick dealing with the fallout on one side, but Glenn, Carol, or whoever struggling with the new responsibility on the other. Do it!

Bring in other religions.

More than most shows on television, The Walking Dead has a surprisingly strong Christian backbone. Perhaps because it’s about America’s South. Perhaps it has something to do with the creator’s own beliefs. We don’t know. From our perspective, though, it would be great to see observant characters of other faiths—Islam, Judaism, etc.—arrive and interact with Father Gabriel and the other Christians.

We know their relationship has swayed into a combination of brother-sister love with strong maternal overtones coming down from Carol, but we ultimately don’t care. We'd still ship the hell out of this and so do a lot of fans. No, it’s not the hottest thing on earth given their past history, but it makes sense in its own way (also, they’re age-appropriate for each other!).

Don’t kill off the black guy.

Tyreese, T-Dog, Bob, Noah: It’s dangerous being an African-American man in The Walking Dead. Studies have been done on this and the results are pretty grim. Let’s let Gabriel live, shall we?

Give us some new couples.

Rick and Jessie had a moment last season, then he killed her husband in front of her. Not the best way to start a stable relationship, true. But, hey, this is the apocalypse. You take what you can get. We’d also like to see Carl and Enid’s flirtations develop into teen love, Tara get a new girlfriend, and Michonne find a special someone. All of these characters need to move on from past losses and a little bit of love goes a long way.

Show us some hot, hot sex.

On top of romance, we could also use a bit more (hell, a lot more) sex with our zombies. You know, for a mature-eyes-only series, there’s precious little hanky-panky going on in TWD, which strikes us as a bit odd. Like, if the world was coming down around your ears, wouldn’t you be trying to get a little anywhere you could? The series’ willingness to show gore and not even a bit of monkeying around is getting weird.

Do a holiday episode.

The characters on The Walking Dead rarely seem to mark the passage of time outside of donning fall coats once in a while. Crucially, they don’t seem to ever celebrate holidays (at least not recently). A Thanksgiving dinner, Valentine’s Day sequence, or Memorial Day cookout would be a great reminder of how much things have changed, and how much they’ve stayed the same.

Give us some answers about the origins of the zombies.

Six years in, we’re actually ready for them to take some of the mystery away. Yes, it would be a gamble to attribute the outbreak to a government experiment (as rumored) or some supernatural end-of-days thing. The show might lose a little of it’s magic. At this point, though, we think we could accept that.

Kill off the Wolves as quickly as humanly possible.

They’re mean, dumb jerks and we don’t like them. Grind those guys up.

A bullet shortage would be a great way back into the terror and danger of the early series given that pretty much everyone is a crack marksman at this point. Think of it: Everyone would have to start using bows and swords. Daryl and Michonne would be the king and queen of the world! We love this. Also…

Let’s take away their gas.

There always seems to be a bit of gas hanging around in the next abandoned car or empty garage. The Road Warrior this is not. Let’s end that. Remember when Rick rode a horse into Atlanta or when Maggie rode down a walker with her steed? Cool, right?

The Law of Averages suggests that at least one notable actor, musician, newsperson, athlete, or model survived the first years of the outbreak. At least ONE. The Walking Dead has done a brilliant job of showing us what a world without media would be like. Adding in a “famous” character—one that all the other characters know—would be a great twist on that (particularly since the celeb will have been reduced to just another survivor). Hell, maybe we could get some b-lister to play themselves.

Even now we have people among us who spend all their spare time preparing for the apocalypse with nuke-proof shelters, huge food supplies, and lots of guns. We’ve seen a little of this in The Walking Dead, but not enough. It would be fun to meet someone who was not only totally ready for the zombie apocalypse, but is actually psyched about it.

Kill off one of the big, long-lasting characters.

Rick, Carl, Carol, Glenn, and Daryl first appeared early in season one. Maggie showed up at the beginning of season two and Michonne at its end. That’s actually a pretty stable group of characters. Sure, we lost Beth and Tyreese recently, but, for the most part, there hasn’t been a real shakeup in a while. Let’s see what losing a major, long-running player—or two—would do to the series.