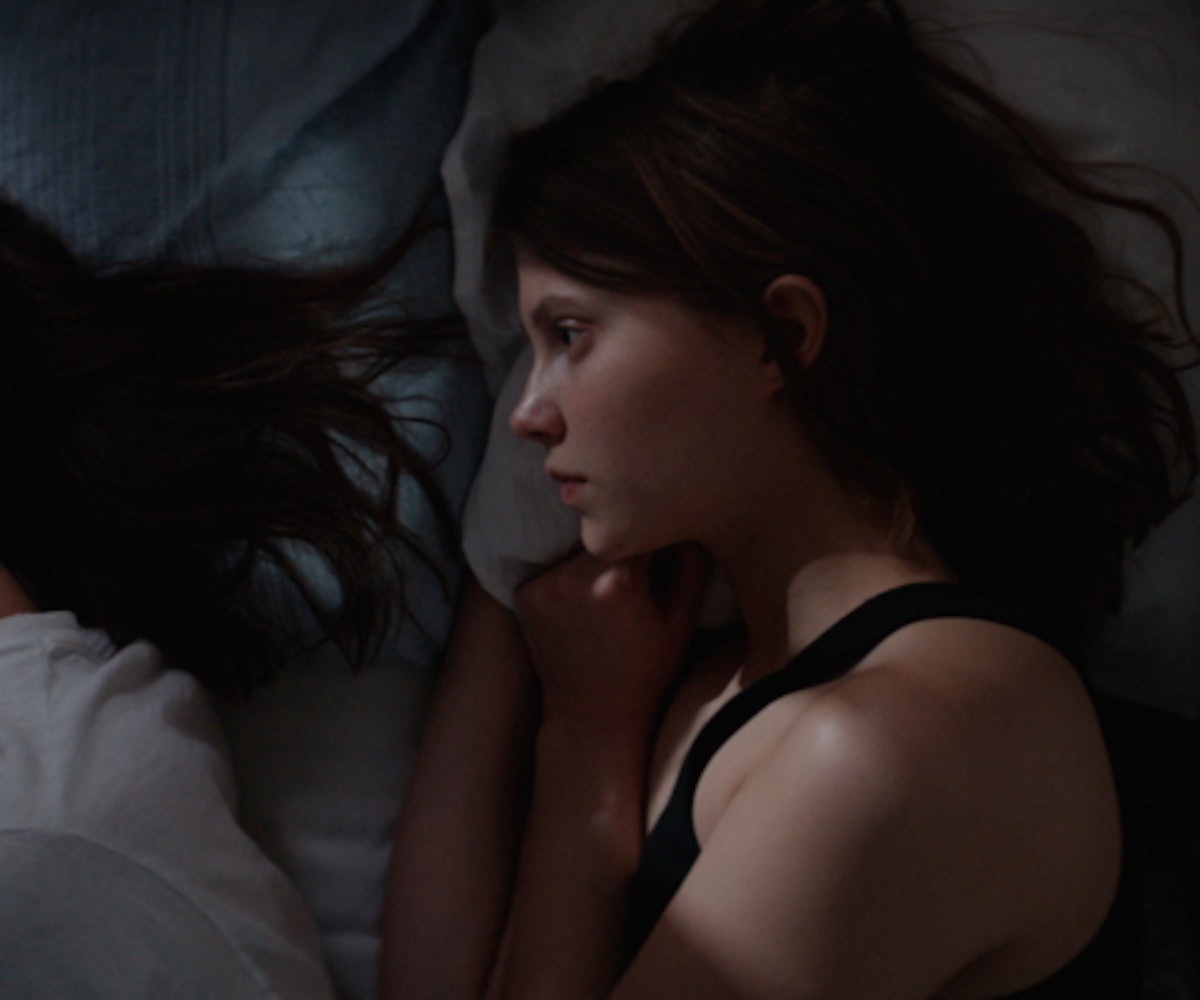 The first adolescent brush with desire—not a crush, but all-consuming true-blue wanting—is confusing and terrifying enough on its own. Count yourself lucky, then, that you didn’t have to simultaneously figure out why your presence seems to project a force field that kills birds.

Thelma, the title character of Norwegian filmmaker Joachim Trier’s genre-bending new feature, activates latent internal forces on two fronts as she falls for a beguiling young woman named Anja around the same time she manifests dark supernatural powers. It’s not the sort of premise a young actress gets to tackle every day, and so Trier’s countrywomen and leading ladies Eili Harboe and Kaya Wilkins leaped at the chance to take on these dense, exposed roles. They exude an intensity onscreen that makes their easygoing offscreen personae a touch surprising. But they’re not too dissimilar from any other 20-somethings: Wilkins has mastered the sarcastic-modest hair flip, Harboe snaps a quick pic for the 'gram before our interview gets rolling, and they both geeked out after meeting Idris Elba the night before. The afternoon before Thelma’s big premiere at the Toronto International Film Festival, the women were in high spirits as they discussed the process of befriending one another, the Scandinavian cinema canon, and their impeccably curated favorite movies.

When did you two meet for the first time?

Eili Harboe: When Kaya came in to audition for the part. I was immediately drawn to her. She was quirky, but super-talented, which I felt really suited the character. I was like, “She is Anja, obviously!” There were a variety of girls coming in that I played opposite against, and she just stood out to me. I had my fingers crossed the whole time. She came in for two more rounds, I think, and then Joachim was like, “What do you think?” I said, “Please, please, please!”

Kaya Wilkins: I didn’t think I’d get the role. It was the first time I had ever auditioned for a movie—I mostly make music. But I really liked Joachim as a director, so I wanted to give this a try and find out what auditioning would be like. I mean to say, I wasn’t all that invested until I met Eili. Suddenly, that was all I wanted to do.

What were your first impressions of the script, and this concept?

EH: I actually got to read the script before I was cast, so I was super-grateful for that, because you get a fuller idea of your character. I fell in love with it, basically, when I read it. The character of Thelma is both vulnerable and strong, so she gets to be complex and challenging to portray.

How did you get familiar with one another prior to the more romantic scenes?

KW: We had a very nice dialogue with Joachim beforehand and we had rehearsals, cold reads, and more involved rehearsals. By the time we started actually shooting, we were very comfortable with one another. It was a very respectful, closed set for the most intimate scenes. We had fun, relaxed vibes. We made the sound guy play “Kiss From A Rose” like a thousand times. I think Joachim was annoyed, but we loved it. Thank you, Seal!

Thelma has been commonly described as a horror film, but I think that doesn’t quite pin it. There’s lots more to it than that.

KW: It’s way more than a horror film because it’s got a dramatic element, about relationships to your family and sexuality.

EH: It’s a coming-of-age story, too. It’s about inner conflict.

I get the feeling Americans don’t have that much awareness of Norwegian film, even in comparison to, say, French film. How would you characterize the film industry of Norway?

KW: My knowledge kind of stops with Joachim’s films, though I love them very much.

EH: I’ve been fortunate enough to have experiences with film in Norway, and the industry’s changing in both directions. We’re getting more bigger-budget movies and more artistic films as well. I hope we find a way to keep the raw, Scandinavian aesthetic alive while telling great stories. The style is very brooding, a sense of coldness and darkness, the weather is very present.

KW: They’re quite isolating, a lot of Scandinavian films. They’ll be about characters living in loneliness, keeping the focus on character-driven stories.

If this film ends up as successful as early reviews suggest, do you think you’d want to pursue English-language films?

EH: I’m open to anything, basically. I‘m very happy with where I am, but I’d also love to work on other great projects. I’m just hopeful.

KW: I don’t know! I’m just like, “Huh, I was in that movie! Let’s see if I’ll ever get in another movie ever again!” I can’t imagine an experience as amazing as this one.

Was it difficult to balance the heart of the romance with the creepier supernatural elements, in your performances?

EH: You need to be vulnerable to portray a person suppressing emotions, and in my mind, Thelma’s supernatural abilities and her feelings for Anja are both part of one suppression. They rage within her in a similar way, and that creates chaos in the film.

Now for every young actor’s least favorite question. What films do you hold closest?

EH: I love the HBO documentary Paradise Lost: The Child Murders at Robin Hood Hills, the whole trilogy. And of course, Mulholland Dr. by David Lynch.

KW: I do a lot of research for my music videos just by watching films, and the last one I remember really, really liking was The Double Life of Veronique.