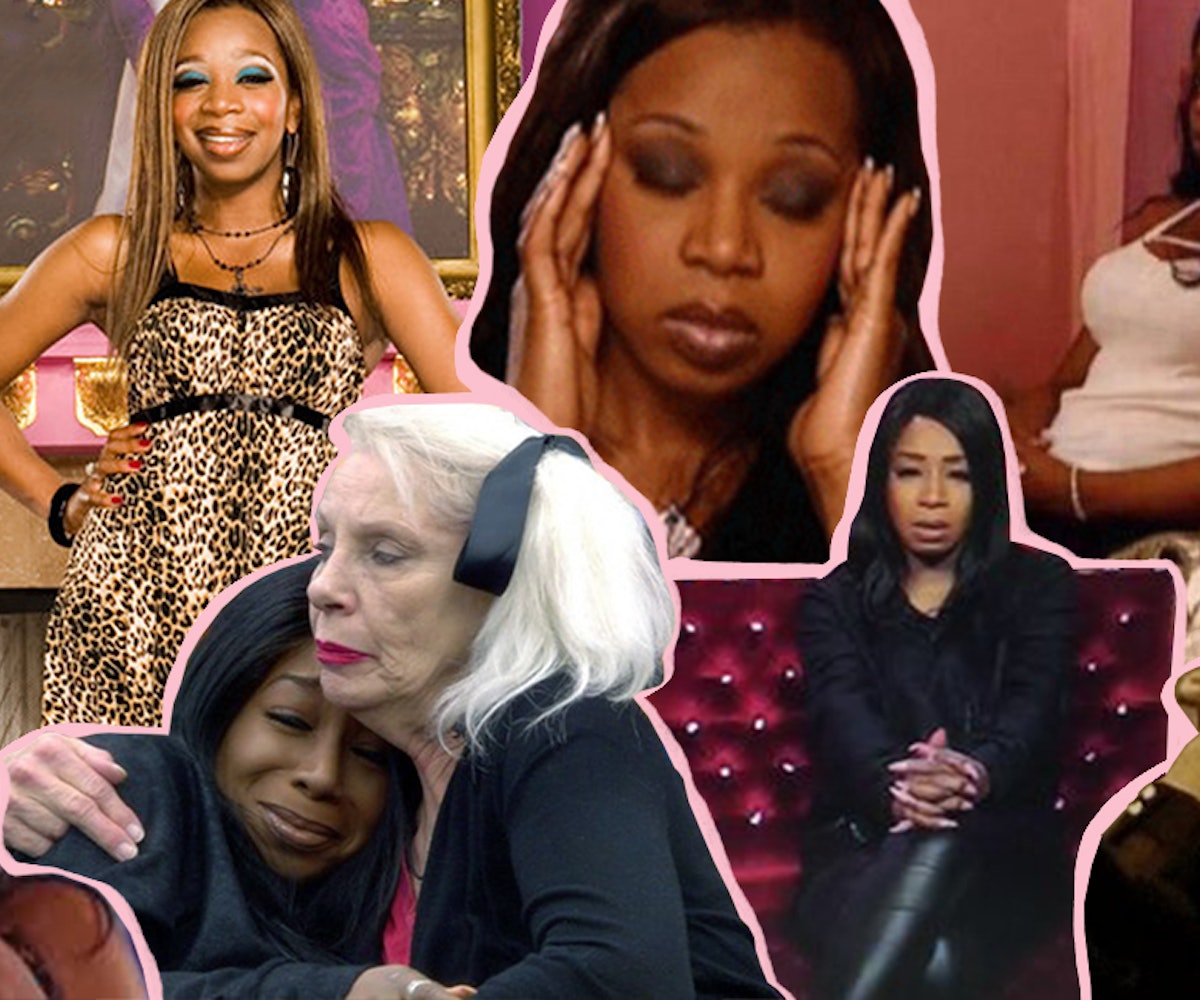 Before we could determine it for ourselves, Tiffany Pollard declared herself the HBIC. Today, that sentiment lives on in her Instagram handle, the way she’s become immortalized in GIF form, and how she managed to get an entire art exhibit dedicated to her antics. Pollard busted into the motherfucking building more than 10 years ago and, it seems, never really left.

Rachel Lindsay may have been the first black Bachelorette of the television franchise, but Pollard was the first to win over America. After appearing on Flavor of Love and Flavor of Love 2 (and having her heart broken both times), Pollard got her own moment in the spotlight with I Love New York. She never did end up getting what she sought out on those dating shows—someone to love, a ring, a happily ever after ending—but she ended up with something better: lifelong notoriety.

As far as reality star careers, Pollard’s 15 minutes of fame expired a while ago. But it has been renewed in the past couple of years when a picture of her sitting on a bed against a wall, legs propped up and sunglasses on, became a widespread meme. She was memed again when Beyoncé gave birth last year and a GIF of Pollard saying, with eyes bulged, “Beyoncé?!” went viral. These are both from scenes filmed long ago, the context often forgotten (though when you put them in context, they’re almost always funnier), but they’ve become their own language. As Doreen St. Felix wrote for The New Yorker, Pollard exhibits the perfect amount of melodrama for this exhausting age. Anything that needs to be said can be said with a Pollard GIF.

Pollard became a part of the pop culture lexicon again in 2016 when she appeared on the U.K. version of Celebrity Big Brother. In a scene that Matt and Viviana, curators of the “David’s Dead: A Celebration of Tiffany Pollard” exhibit in Brooklyn have referred to as the pinnacle of reality television, Pollard is informed that Bowie has died, but she thinks the dead "David" in question is David Gest, one of the other celebrity guests in the house who has been sick in bed. What follows is Pollard reacting as only Pollard could/would—with dramatics, tears, and lots of yelling.

This scene takes up two walls of the exhibit. There’s an almost minute-by-minute recreation of what went down—from Pollard receiving the news to her finding out the truth to her being comforted during her short-lived grief. Appropriately, the late Bowie’s exhibit at the Brooklyn Museum is what motivated Matt and Viviana to dedicate a show to the reality star. “We decided it was time to celebrate our generation’s greatest performance artist who gave us the most important moment in reality TV history,” they tell us. “It is seven minutes of pure chaos, and there hasn’t been anything like it on TV since.”

And that's because there's nobody else on reality TV quite like Pollard. Beyond having more quotable one-liners than anyone who came after her, Pollard always remained unapologetically herself: a loud, proud, sure-of-herself black woman. “She is a unique reality star in that she is wholly vulnerable and relatable in how open and honest she is and, at the same time, she is aspirational in how confident she is,” Matt and Viviana say. “Whether she’s telling fellow Big Brother contestants not to look at her in the face after trying to vote her out, or telling Claudia Jordan that she doesn’t show tears when she cries because ‘it’s an inner cry, bitch,’ we can all learn a lot from Tiffany.”

Audrey Lyall, who created one of the pieces that hang in the exhibit titled “I Am Just So Powerful,” feels the same; in her creation, Pollard is a puppeteer in control of different women from the different shows she’s appeared on. “It’s meant to show that [Pollard’s] the queen of reality television and inspired everyone who came after her,” Lyall says about her work. “People treat reality TV as a joke, but her persona inspires people to put themselves out there and be loud and proud.”

You don’t have to go very far to see Pollard’s influence in action. Log on to any social media platform, and she's there. Watch any reality television show, and her characteristics are visible in the least-liked, most-obnoxious person on camera. Upstairs at Pollard’s exhibit in Brooklyn, was a VIP section roped off for Pollard and her equally dramatic mother Sister Patterson’s visit later that night. There was a record player and a couch for the guest of honor to sit on. Taped above it, in big paper letters, were five words, visible even from downstairs: “Tiffany Pollard Invented The Internet.”

“David’s Dead: A Celebration of Tiffany Pollard” is on display now until June 2 at THNK1994. Check out some of the artwork ahead.