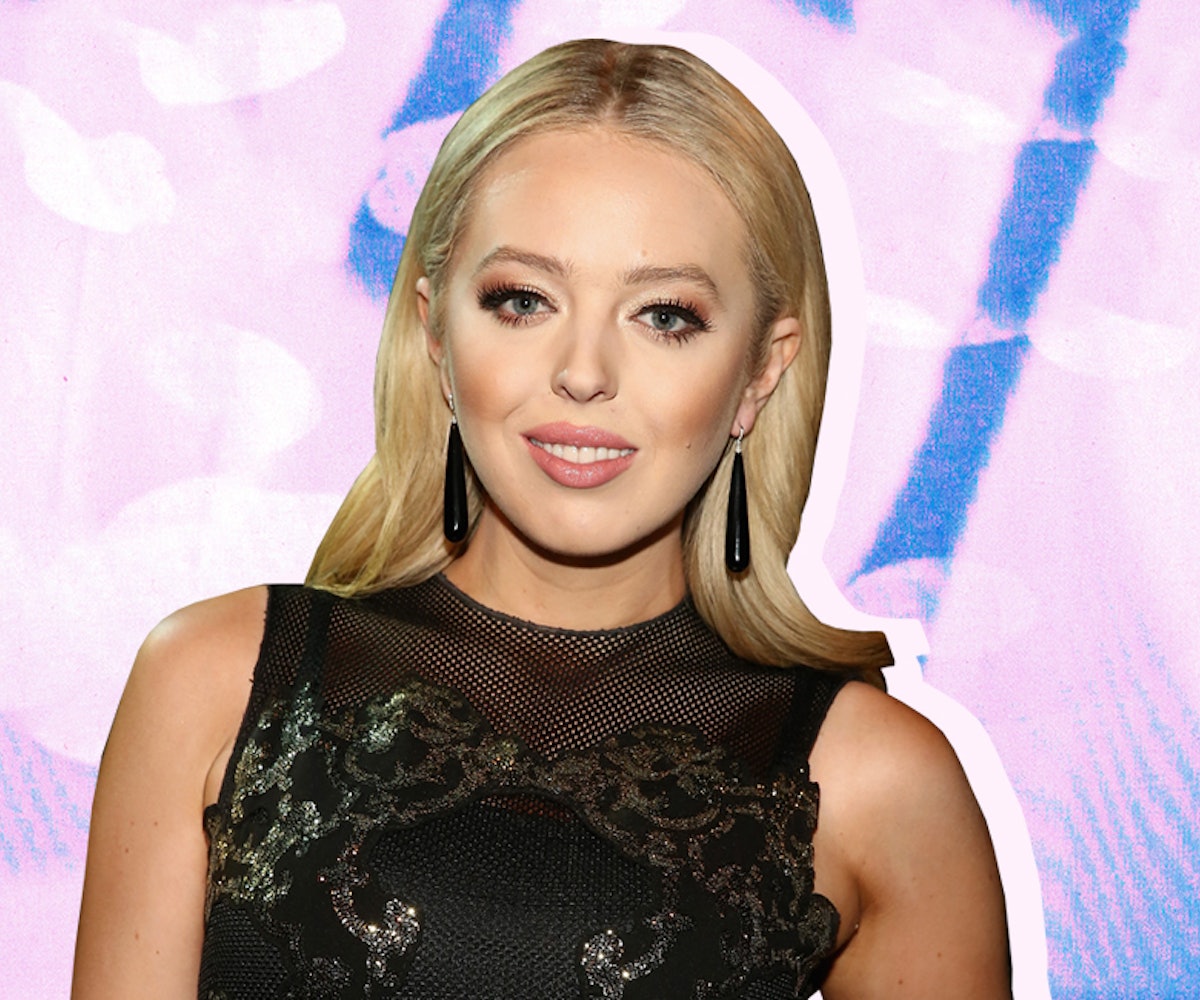 If you are the kind of person who has a Google alert for Tiffany Trump, September 5, 2017, was your lucky day. Or maybe it wasn't, because the headlines... well, they weren't kind. Instead, Tiffany had made the news because her representative had emailed Harper's Magazine asking for an invite to the NYFW Icons party thrown by Harper's Bazaar. While it was a relatively minor mistake (although, as a rep for Harper's told The Cut, "Over 15 plus years at Harper’s Magazine, I have never received a party invite request intended for Bazaar"), it led to the kind of pity-laced, snickering, snarky commentary that tends to follow news of Tiffany Trump no matter what she does, with media outlets reporting the story by writing things like: "She's an Icon in her own mind." And the withering: "The young Trump is not an unfamiliar sight at fashion week; she is a regular at Dennis Basso's fur shows, for instance." Or even the simple: "Try again, sweetie."

Each member of the extended Trump clan attracts their own kind of attention. The Sphinx-like Melania has been greeted with a level of sympathy, that has far more to do with how easy it is to project our own horror at the thought of being married to Donald Trump and our collective assumptions that their union is somewhat less than perfect than it does with anything Melania has ever explicitly said about her life or marriage. Don Junior and Eric are often treated with the level of scorn and contempt which they fully deserve, considering they are two of our most easily accessible examples of nepotism run amok—as well as being exploitative fear-mongerers who kill animals for fun. Yes, they are mocked for being bad at sitting, but that mockery is often tinged with the fear we should all have of powerful white men who like to talk a lot about their love for guns. Ivanka is still, despite her ever-closer association with her father's bigotry-driven administration, treated relatively gently, due, no doubt, to most people's ingrained reticence to either distrust nominally beautiful women or perceive as threatening a mother who speaks in the kind of professional jargon to which we've become all but programmed to respond positively. ("Lean in" much?)

And then there's Tiffany. But first: What's in a name? The three syllables of Tiffany are soft, moving from the middle of the mouth to its front and back again to the middle; you don't feel it after you've said it, after your tongue makes that final tap. It disappears from your lips. Compare it to Ivanka, also three syllables, only these you practically have to cough to get them out; the "ka" lingering in the back of your throat, some might feel it as a tickle, others as a prickly burr. Either way, it stays with you, while Tiffany does not. No wonder, then, that there are countless examples of Donald Trump extolling the virtues of Ivanka and then barely remembering Tiffany's name.

And whereas all three of Donald Trump's children with his first wife, Ivana, carry family names, Tiffany was named after a store. There is pathos in that, just as there is in her origin story, which involves her father responding to the news that his girlfriend, Marla Maples, was pregnant, by saying: "What are we going to do about this?"

It's an inauspicious beginning to say the least, and it foreshadowed the way Tiffany has been treated throughout her life, relegated to the sidelines, cast as the "forgotten" or "other" child, always destined to live in the shadow of the one woman who seems to have earned Donald Trump's total devotion: Ivanka. Of course, nobody—not even his wife—holds a candle to Ivanka in the eyes of Donald, but the disinterest with which he regards Tiffany is notable for how comprehensive it is.

And that dim view is contagious. Beyond the Harper's mix-up, Tiffany has been mocked for everything from misquoting Frank Ocean to her association with the Rich Kids of Instagram to the fact that she had a boyfriend named Ross Mechanic. The Tiffany Trump narrative is one, then, of haplessness, one in which she seems a tragic figure in a dark comedy not of her making. She's a clown, but she doesn't seem to realize it. Her lack of awareness as she does everything from confuse a fashion magazine with a culture-political journal to building an Instagram presence premised on being a "rich kid" (when we all know that the only reason her billionaire father even gave her an allowance is because Ivanka asked him—and we know this because Ivanka revealed it in one of her books) is startling. It's hard not to cringe at things like an Instagram shot of Tiffany on a skyscraper balcony in skyscraper stilettos, holding a balloon and captioning it "my back to school balloon." (She also included #GeorgetownLaw.)

But it's also hard not to find it somewhat refreshing. In stark contrast to Ivanka, whose every move, including those made on social media, appears to be intentionally calibrated and who lives a life of intention, Tiffany seems more spontaneous, more capable of breaking free of the Trump clan, where family loyalty and toeing the party line are of the utmost importance. This, then, is why news of Tiffany liking social media posts from the anti-gun March for Our Lives made many people gleeful, with some crediting the youngest Trump daughter as being "the smartest one."

And yet, while imposing this type of narrative on Tiffany Trump, one in which the unappreciated daughter strikes out on her own and rebels against her horrific family, might serve as a fun diversion, it's ultimately as futile as hoping that Melania harbors anything other than self-interest beneath her stoic surface, or that Ivanka is interested in pursuing any woman's agenda other than her own. It is tempting to see Tiffany as being capable of achieving some level of Trumpian redemption, casting off her family's mantle, and using her law degree to fight for the rights of undocumented immigrants in this country. But it's a false hope.

Mere days after giving social media support (which, in itself, is an oxymoron) to March for Our Lives, Tiffany appeared at her father's side for the Easter Egg Roll on the White House Lawn. And this shouldn't be a surprise: Tiffany has been there for her father, supporting his campaign and administration, for the last couple of years. No matter how complicated the Trump legacy may be for Donald's children (or his wife or ex-wives), it is clearly not one which any of them—including Tiffany—are willing to disown. And Tiffany's presence on Easter was made more interesting by the absence of Ivanka, who some say has been distancing herself from her father as chaos continues to reign within the West Wing. If, then, Tiffany's presence is an indication of her willingness to usurp the role of golden child, no matter the costs, it's a sign that no matter how much we've all taken pleasure in laughing at her mishaps, she will definitely be the one with the last laugh. The joke's on us. And it's name is Tiffany.

NEXT UP
Culture
The Madonna Biopic Is Being Scrapped
Entertainment
Meet Amy Allen, The Grammy-Nominated Songwriter Behind Pop's Most Honest Hits
Entertainment
Muni Long On The Grammys, Burnout & Not Worrying About The Labels
NYLON Nights
Yunè Pinku's Party Playlist Is An Ethereal Pop Fantasia
Style + Culture, delivered straight to your inbox.