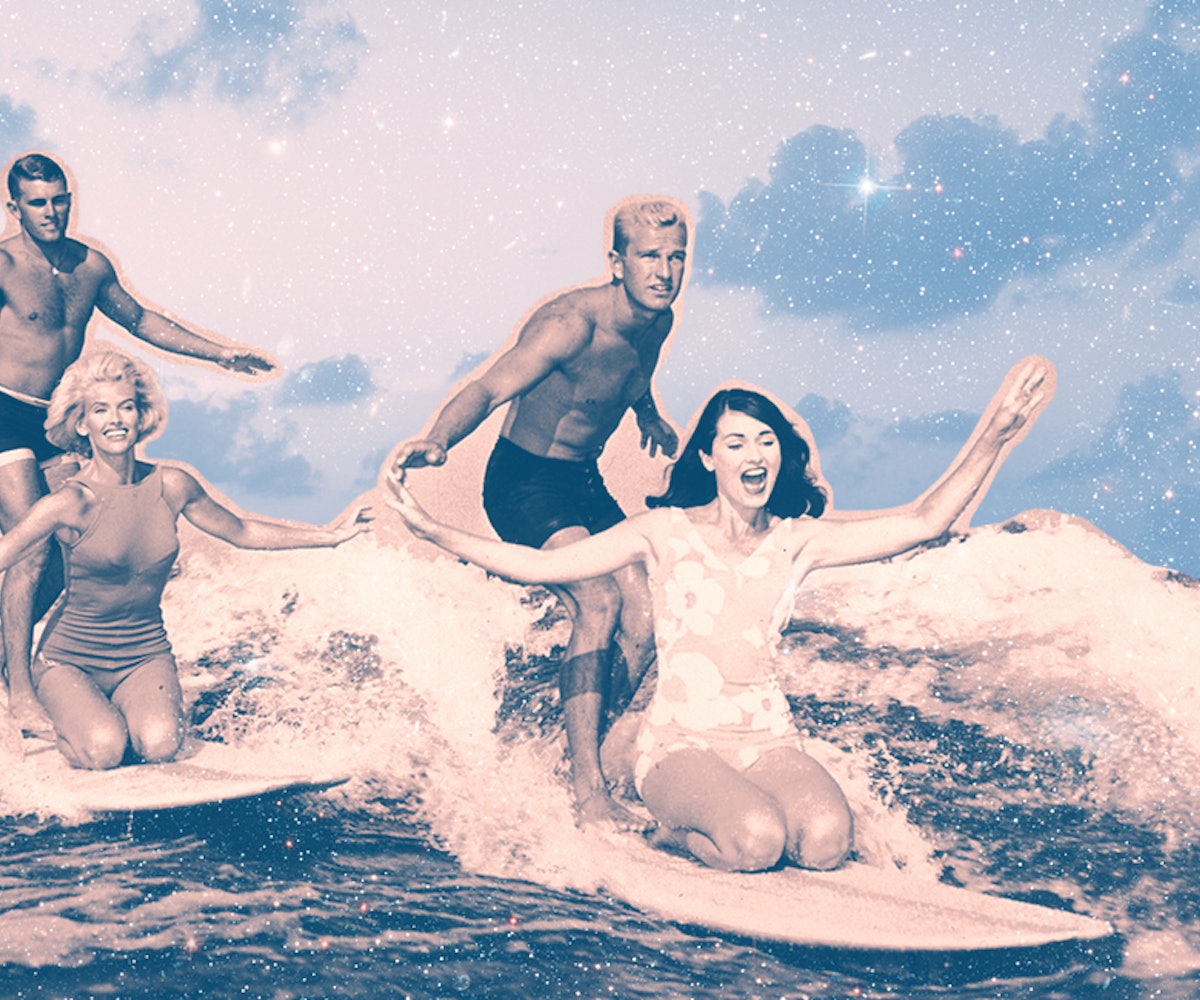 It’s not about the bikini body or getting slim for summer. Our goal is to be prepared for any sport that comes our way, whether it’s a chance to go for a run on the beach with your girlfriends, or borrow a surfboard and head out with a hot date—or crush them on the mini golf course. You’ve got this… But just in case, we chatted with a few experts about the best ways to fake expertise in these traditional summertime activities.

Running on the Beach

Even if you’ve put in solid miles pounding the pavement, running on the sand is a whole different animal. You’ll find that it’s a lot more muscularly demanding and you get tired really quickly. To get faster and enjoy it more, aim to be closer to the water, where sand will be firmer. Low tide makes this a lot easier and helps you avoid running on a slant. Because you will inevitably be on a slanted surface though, make sure you do an out-and-back route, so your muscles get the same work on both sides. Expect to feel a lot more tired than a normal road run. To start, cut your distance way down and plan in some walking breaks. Your muscles will really feel it—don’t be shocked if you’re sore the next day! And take advantage of the ocean to take a quick post-run ice bath to decrease inflammation (and cool down).

The biggest mistake newbie surfers make, says Shaun McGrath, founder of Summertime Surf & Paddle Schools, is just grabbing a board and trying on their own. Before you and your friends try to imitate Blue Crush, go out with an instructor or experienced friend to save a headache and injuries. And, McGrath notes, have someone explain the etiquette—you don’t want to snake someone on a wave by accident. McGrath also adds that it's best you ID yourself as a newbie. Say "I am a kook,” he adds, so you’re speaking surf lingo. "Identify yourself as a beginner, you will get a lot more respect that way from experienced surfers,” he adds. "Nothing worse than someone who pretends to know what's up."

Before you go, McGrath says you can pregame the time on the board by doing planks and push-ups to build strength.

Once you’re in the water, pause and take a calming breath before you pop up. Can’t seem to stand? "Enjoy the environment and go boogie boarding instead,” he says. “It's all just getting out in nature and enjoying the sensation of riding the waves.”

If you’re not a pro putter and the clown’s mouth is super intimidating, play one obstacle at a time. Like a game of pool, you wouldn’t try to sink three balls at once, right? Same goes in mini golf. Focus on one thing at a time: making it through the windmill, making it over the weird edge, and then, finally, making it into the cup. And try to hit the ball squarely, for the most accurate aim; tapping it sideways is just begging for it to spin out. (Last tip: If you’re going with mini golf regulars, ask for a handicap!)

If it’s been a while since you’ve pedaled for fun, don’t be intimidated: The low-impact sport of cycling is the perfect summer activity for pretty much any level of athletic human, from couch potato to CrossFit guru. Don’t opt for the widest bike seat you can find, unless you’re only riding for a few minutes at a time. Beach cruisers might look comfy, but after a mile or so, you’re going to be feeling some serious hurt as your hips shift to accommodate that beefy seat. Pick a bike that’s suited for your ride or mention your plans to the rental place or bike shop. Long ride planned? Buy a pair of bike shorts with a padded chamois: It’ll look and feel a little silly at first, but your lady parts will thank you.

SUP can be crazy enough on its own—that’s stand-up paddle boarding, for those not up on summer sport terminology. You essentially use a paddle on a massive surfboard, standing up on it as you navigate lakes, rivers, bays, and oceans. SUP started gaining popularity a couple of years back, but now, activities surrounding the sport have started popping up, like SUP Yoga, which is exactly what it sounds like—yoga while positioned on one of these boards. Sounds terrifying, but it’s really not. Actually, if you have a background in yoga, you’re more likely to be good at it as compared to regular SUPers, says Tara Van Ness of Grow Yoga NJ. "Don’t be afraid of getting wet,” though, she adds. You’ll likely fall in: In fact, Van Ness tries to start most of her classes by making women get into poses that will likely land them in the water. “Once you fall in once, you realize that it’s fun!” she says. And since the classes are conducted in shallow water, you don’t need to be an amazing swimmer.

You’ll flow through a slow series of poses—moving faster if you’re in an advanced class, but Van Ness says she tells people to go at their own pace and do what’s comfortable for them. That might mean an hour in savasana working on your tan instead of downward-dogging the whole time.

Her pro tip: "If you fall off the board and the water isn’t shallow, grab the other side of the board with your hands, and slide your legs on to get back up," she says.

So, does this mean bikinis are required? Heck, no. Van Ness says she’s seen it all in yoga class. Wear whatever is comfortable—but know that it’ll probably get a little wet, so heavy fabric might not be comfy!