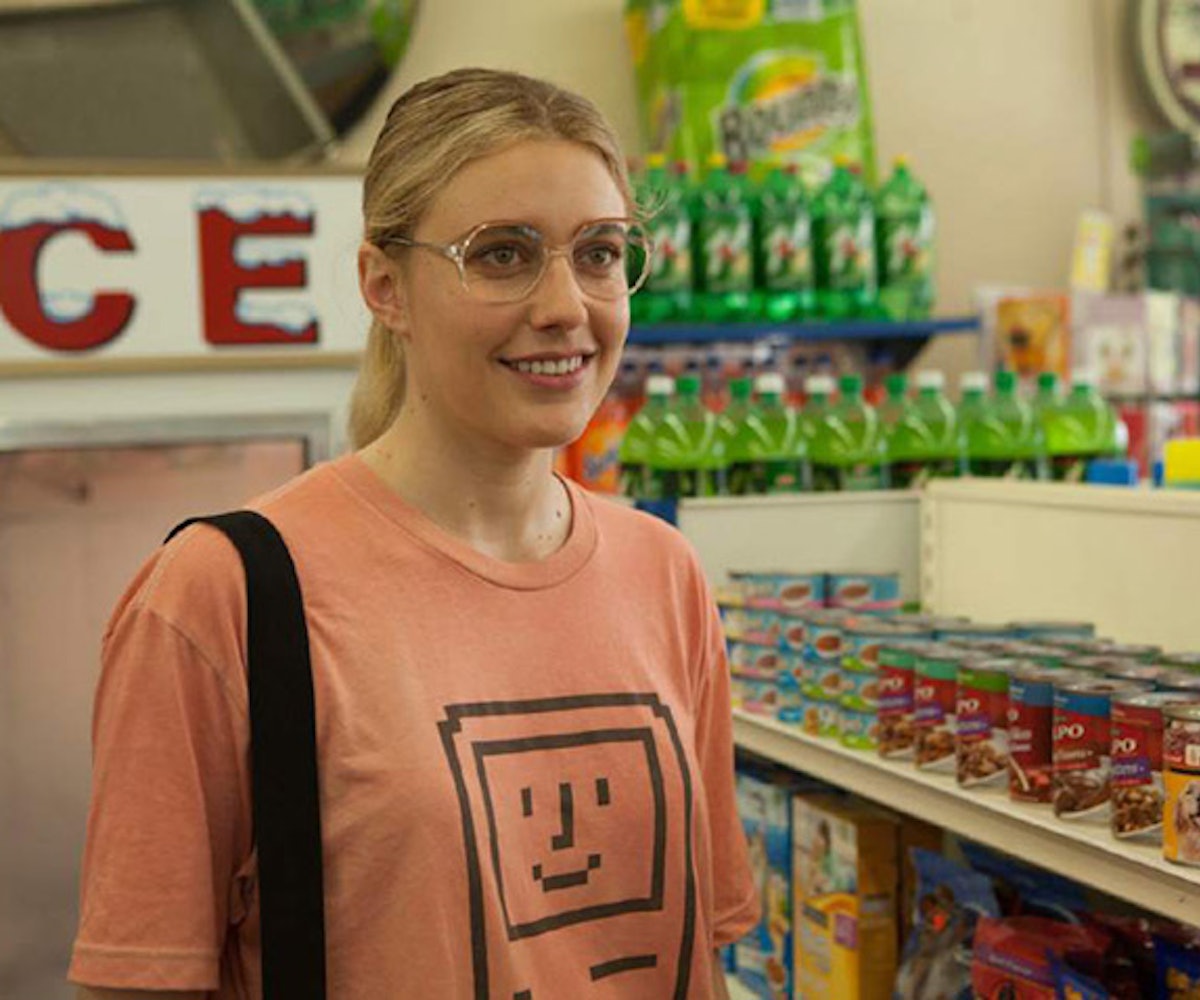 In his 1995 feature, Welcome to the Dollhouse, master of the pitch-black comedy genre, Todd Solondz, introduced viewers to Dawn Wiener, an awfully awkward seventh grader who embodied some of the middle school horrors that so many of us have gone through. Played so memorably by Heather Matarazzo, the writer-director brought back Wiener (played by a different actress) in his 2004 Palindromes only to kill her off. But Solondz has never been a filmmaker who plays by the rules, and therefore it should come as no surprise that he's brought back Dawn yet again in this year's aptly titled film Wiener-Dog, which sees Solondz string together four stories around a dachshund. (This time around, Dawn is played by Greta Gerwig.) The adorable pet goes from owner to owner, and viewers are privy to the cold reality of yoga-obsessed parents and despondent millennials.

With Wiener-Dog now out in theaters, we spoke with Solondz about his love for dogs, film school, and what movies can really do for people.

What led you to make this film in the first place?

I had seen Au Hasard Balthazar years ago, and I had always wanted to make a dog movie. I watched Au Hasard Balthazar again, and it has a fairly oblique, wobbly kind of narrative. That gave me a certain confidence to approach [Wiener-Dog] with the structure that I came up with. This also became an opportunity to bring back Dawn Wiener whom I had killed in Palindromes. I had always wanted to offer her another possible life trajectory, one maybe a little bit sunnier, a little bit more hopeful. This seemed like a really good opportunity for that. The dog really is just a conceit. For me, it’s really about mortality, and how that shadows and hovers over each of the characters and stories here.

The premise makes the film sound like it’s about people's interactions with Wiener-Dog, but it ends up that she’s more of a neutral observer to what’s going on with these people’s lives.

Yes, but not an observer. A dog, or a pet, is a vessel that pet owners fill with their own hopes or yearnings or whatnot. A dog, it’s very much a projection of innocence—an emblem of that. It’s very hard to see a dog in its own dogness. People have a much harder time seeing a dog in trouble than a human. I think the film is responsive to that reality.

What are your own experiences with dogs? When you see a film that heavily features a dog what do you think or feel?

I grew up with a family in the suburbs, and we had dogs. We loved having dogs. We went through a lot of dogs. None of them lasted very long. We weren’t very responsible children. As an adult, I haven’t had one, but that’s because it’s too much responsibility. I love them, I just can’t revolve my life around them. When I see a dog in a film... it depends on the film, you know? Most often they’re like Benji or Lassie. They’re dogs that, again, become embodiments of a kind of projection. Being so egocentric, it’s hard not to anthropomorphize. It’s very sentimental. I wanted to approach things a little bit differently.

There are some aspects of the different narratives in the film that are rather specific, like a hitchhiking mariachi band or a disgruntled film professor. How much did you draw on your life and experiences for the film, especially since you happen to teach film?

I don’t really know any mariachi players personally. I do teach at NYU’s Graduate Film School. I love teaching. I love my students. I love the job. I have some wonderful colleagues. That said, NYU, it is an evil empire. Tisch School of the Arts is managed with remarkable corruption and incompetence. It’s hard not to have a satirical thrust to the narrative there. I can’t say anyone would confuse me with this character, this very troubled, sorrowful character. I don’t think anyone would make that connection with me, although I feel for him. I think the overlap is most apparent in that I probably am somewhat of a dinosaur as well to the young people. This is a story of a man’s quest for meaning and redemption. That’s what the focus really is.

How do you feel about the hotshot director character who says that you should drop out of film school and you can only learn by doing?

Look, there is obviously a certain amount of satire and self-mockery, with the way he has those yellow sneakers. I think film school is good for some people and not so good for others. It depends on who you are and what your circumstances are. I certainly wouldn’t make it a blanket recommendation. For some people, it’s a great thing and for others, it’s very questionable. I myself went to film school, and while I thought it was a joke and a ripoff when I was there, it was also what made possible for me to have a career in film. I had a wonderful time, though it is true that I dropped out.

I really liked your use of slow motion, especially the scene with Remi playing with Wiener-Dog, and then later you have the very long shot of the dog’s diarrhea on the roadside. Was there anything specific you wanted to accomplish or convey with the slow motion?

It was used as an expression to convey, let’s say, a freedom from the cage that he himself lives in, that little boy. For the diarrhea, I thought [Jean Luc] Godard’s Weekend was an inspiration. It’s perhaps at times hard or unpleasant or funny to look at, but it also becomes, within the context of things, sorrowful and poignant, given the context of mortality.

What compelled you to include the intermission? I thought it was so strange and funny.

I had written a doggie montage in the middle of the script. I didn’t know exactly how I was to going to pull this off, but I felt it would be an opportunity to make a much more expansive movie, to give a bigger picture, a palette of the whole country in some sense given our limited means. Obviously, it’s playful. I have this music that Marc Shaiman and Scott Wittman had written. I had worked with them before, and I knew that they could mimic the spirit of the “Riders” song that Johnny Cash had done. Again, I wanted a very American and expansive [feeling], and the story of the quest that the dog has for a home. That was made explicit in the lyrics. That’s where that evolved.

I think anytime you make a movie, you write a story. You want to capture some of your experiences, of your understanding of the world as you live it. Maybe you devise stories that conserve that focus in ways that you will, you hope, make audiences see things from a perspective a little bit different from what they’re used to. You hope you can articulate things that sometimes are hard to articulate even amongst one’s intimates.